The quarterly mtgfinance event that is the Pro Tour is upon us again this Friday. This weekend will see the best players and brewers in the world congregate at Milwaukee to duke it out for the spoils of Pro Tour Battle for Zendikar. Fall Pro Tours often are a little more exciting than the other Pro Tours, showcasing the secrets of the overhauled Standard metagame (the summer Pro Tours would be equally exciting from next year onwards as the twice-a-year rotation schedule kicks in).

Every Pro Tour has never failed to move prices of new and sometimes old cards wildly. The price for Abbot of Keral Keep, Exquisite Firecraft, and Hangarback Walker spiked hard and fast during Pro Tour Magic Origins as some of the most omnipresent cards in the top 8. Even Temple of Epiphany, which was about to rotate out, experienced a 200% surge in value. Pro Tours are the best time for short-term bets.

I usually make paper bets for Pro Tours,  but for Pro Tour Battle for Zendikar, I would be solely speccing on Magic Online. Life is a little like Magic. Sometimes unexpected events happen occur that forces you to change plans you’ve had for the next few months. In my case, I stumbled upon this little creature on the roadside early last month, and decided to adopt him. It turns out that vet trips, blood tests and vaccinations costs a lot more than I expected, and they kind of ate into my budget for Battle for Zendikar.

I have to make the decision with my remaining budget to either retool my decks(s) for the new Standard metagame with the new lands required to make it function. With a couple of PPTQs coming up and the Game Day next weekend, I decided to spend my remaining budget on assembling my battle lands instead. So it looks like I will be keeping a close tab on the price of cards on MTGO for Pro Tour Battle for Zendikar.

A little tangent here: as I’ve mentioned, acquiring land base is often best done after the Pro Tour as the rare lands would drop in price as supply of the new set increases every week. The downside, if you are a competitive player, is of course having to play with suboptimal manabase for nearly a month. Thankfully it looks like most decks can get away with one or two copies of each battle lands, just like what Modern decks do with shock lands. Keep that in mind if you’re acquiring your battle lands now.

Let’s get going. The first round of Standard (Round 4) at the Pro Tour is coming to a conclusion and we are getting a taste of the new Standard metagame. Our very own James Chillcott (@MTGCritic) is doing the main coverage of the event itself, do check it out to keep up to date with the latest developments at the Pro Tour. I would be focusing primarily on the price movement of cards on Magic Online and would only be touching on the event itself lightly.

I would be using the pricing and charts on both goatbots.com and the aggregate from mtgowikiprice.com.

Here’s a snapshot of the most expensive cards in Battle for Zendikar on Magic Online:

It may be Pro Tour testing, or perhaps brewer extraordinaire and Saito has something up his sleeves, but it looks like Oblivion Sower is unlikely to shine at the Pro Tour after all. There are only five Eldrazi ramp decks out of the pool of 367 decks at the Pro Tour. I am not too keen on Oblivion Sower at double-digit price and I think it may be dropping soon if we don’t see any Eldrazi action on camera, and I think chances are slim that we will. 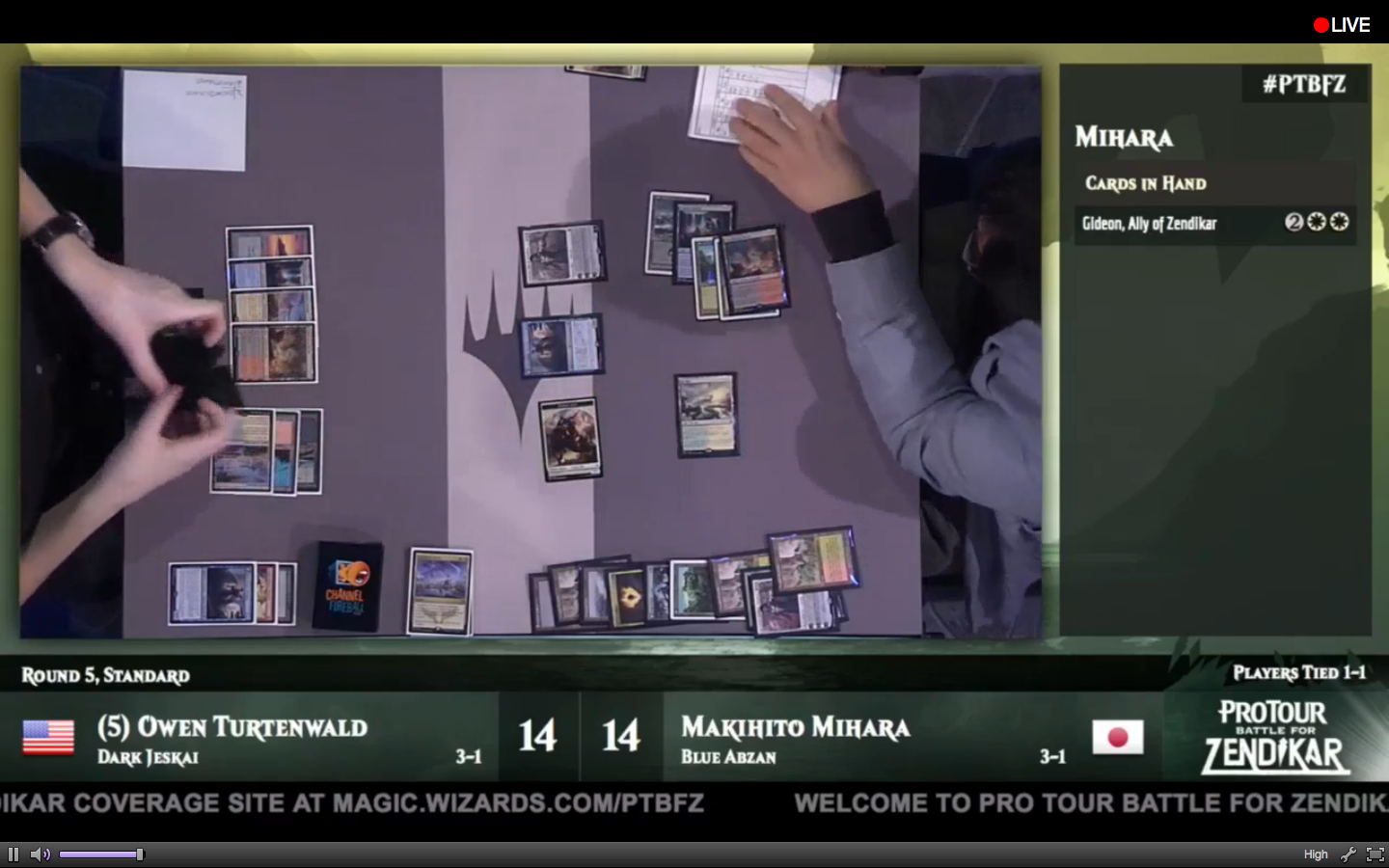 Two top tier players on coverage for round five. Turtenwald is on Dark Jeskai while Mihara is on Blue Abzan (or rather, Wet Abzan). Both decks run Jace. We know at least that Mihara runs Gideon. It looks like Mihara is doing the Jund by mashing up all the best and most expensive cards into a box and call it a deck.

Exert Influence (0.49 tickets) is popping up in Mihara’s sideboard and Dan Ward’s deck tech (also in the side. James’ coverage article has the decklist). Don’t bother with it as sideboard rares are rarely worth anything on Magic Online.

Battle for Zendikar cards largely remained the same at the end of a day one without much surprise new tech save for brief servings of a BFZ-rendering of The Aristocrats (UB in the hands of Calcano, GB in the hands of Nassif). 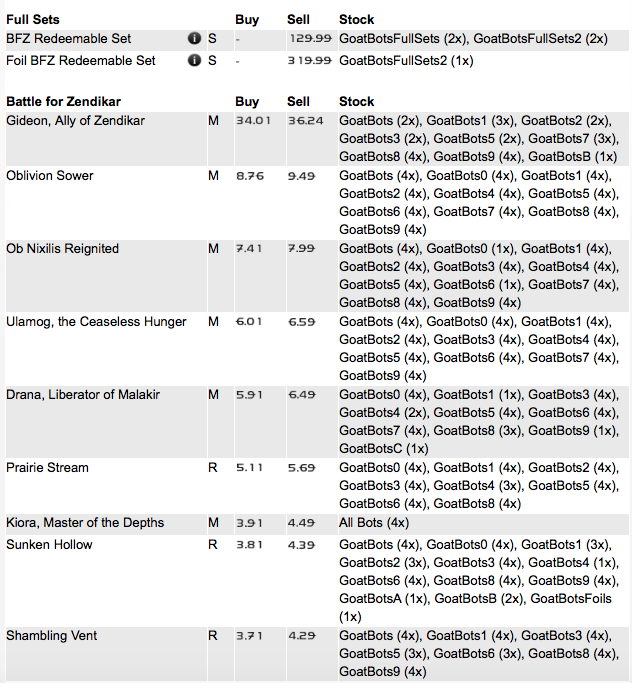 The only winner is Smothering Abomination which went from 0.30 tickets to 0.89 tickets and that’s nothing of interest really.

Join us tomorrow as day two unfolds and hopefully we would find the Den Protector/Abbot of Keral Keep of this set.