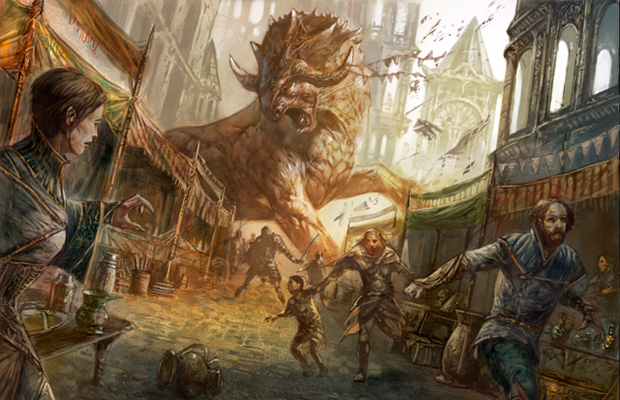 Wow. It feels like I’ve been gone forever, but it’s only been a week. A mixture of a stomach bug and huge workload at school joined forces, so I took the week off from writing and tweeting about Magic cards. Now that we’re up and running again, I want to pick up where I left off, and continue to focus on collection buying. I don’t want to pretend to know what I’m talking about by bringing up Commander spoilers, even if it is the only format that I play anymore.

I went to Twitter two weeks ago to crowd source a collection buying topic to talk about, and Scott Munro wrote in with this gem: 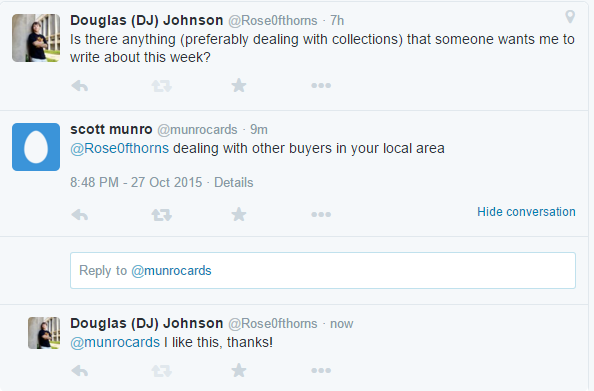 While I’m lucky enough geographically to be one of the only cash buylists in a 45-minute driving distance, most of the people reading my articles and trying to level up their finance game probably don’t have that luxury. Some of you guys live within an hour or two of a huge LGS that has an iron grip on a lot of the collections that come through your area. Some of you have to compete against, well, people like me. Heck, some of the locals reading this article might even be reading it to learn how to compete against me. That’s fine, too. The content of this article originally had a lot more references and metaphors for treating your competition like your brother or sister, and how sometimes you have to give each other space and sometimes you have to work together, but… meh.

Anyway, there are two prevalent strategies that I want to bring up that can help you build your own personal brand as a buyer and seller of cards, without encroaching on another established buyer’s territory. One focuses on flying solo and trying to learn the weak areas of your competition, and the other involves cooperation between you and the buyers that you’re “competing” with, for lack of a better word, so that you can both end up winners.

Let’s say that for argument’s sake, you have an LGS within walking distance of you. We’ll call them CardGarden, or CG. CG is a great LGS, and you love to play FNM there every week. They have solid enough buy prices that a lot of your local players will regularly sell their cards to CG when they need cash, and fair sell prices such that you can’t really catch them unawares by grabbing cards that should be priced much higher. All in all, CG is a quality LGS that you enjoy attending and playing at, even if you personally don’t buy or sell with them.

How do you buy cards locally at buylist prices when most of your players default to a known constant? Well, a brick and mortar store inherently has limitations. They can’t stay open 24/7, so there’s a window of opportunity when their doors are closed. Again, we’re going to come back to Facebook because it’s one of the hot spots for buying and selling cards locally. If it’s a Sunday evening at 9:00 p.m. and your LGS is closed, Bill might post his Modern deck on Facebook in the local group in order to pay his rent, insurance, or whatever. If Bill needs cash ASAP, you can send him a PM and he’s much more likely to negotiate with you.

While you obviously don’t always have a ton of windows where your LGS is closed, there’s also the possibility that the person selling their binder or deck doesn’t have the transportation to make it to CG. If you have a car or are able to meet the person without them putting in any actual effort, you can step up your game where the LGS is rooted to one specific location. The magic words, “I have cash in my hand and can drive to you right now,” have sealed the deal on many collections in the past several years for me, and adds an extra convenience factor to sweeten the deal even if you’re not paying as highly as the LGS.

Now, this obviously isn’t always going to work: no method here is a guaranteed get-rich-quick scheme that will leave you with thousands of players swooning at your door trying to sell collections next week. A relationship and brand take time and trust to build up, and it took me years before I had people messaging me saying, “Hey, my brother’s friend told my mom to tell me that you buy Magic cards.” With enough time and effort (and a bit of luck), I do think that it’s possible for anyone to pull it off.

Does your LGS buy bulk commons and uncommons? Most don’t, at least in my experience. Some shops also pay less on even the higher-end Legacy staples, just because there’s really no market for them in the area. I’ve seen a store offer a mere $40 for a minty Force of Will to a kid that found it in his dad’s shoe box collection. Because the owner had no experience running Legacy events, he knew that it would sit in his stock forever, and he didn’t sell on TCGplayer at all. Even if you have no way to move that Force of Will locally, it doesn’t take a brick and mortar store to message the guy on Facebook later and give him the option of $55 or $60, then flip it on TCGplayer for $85 later.

The point I’m trying to make is that there are probably some things your LGS (or other local finance grinders) try to stay away from. Maybe it’s outside of their comfort zone, or maybe they don’t know the intricacies of the outs for it. This works in your favor. If nobody else in your area buys bulk commons and uncommons, pick up that banner and make some room in your closet. If there’s something that your LGS or other buyers want to stay away from, that’s a chance for you to move in and find the person who wants that particular product without stepping on any toes.

In that same vein, it’s entirely possible for you and other local buyers to work together. Let’s keep going with the assumption that your LGS doesn’t buy bulk. It can’t move it because it mostly sells to competitive players for Standard/Modern nights, and it’s way too much work to deal with 50,000 cards in bulk that the store owner has at his house.

Now this sounds like an opportunity. If that bulk has been sitting at his house from cracking boxes over the past few years to sell singles and he’s not going to move it, why not make an offer so that you and him can work together? Pay him $200 to get those 50,000 cards out of his basement, or maybe work out a deal where you give him cards equaling a bit more than that in value. Hell, if he knows that he has a constant out flow to incoming bulk, it gives him a reason to start taking it in at the store if he knows that he has a low-effort out that will guarantee a profit margin. He buys it from locals at $3 per thousand, then you swoop in and pick it up at $4 or $5 per thousand.

Before I make my exit for the week, I just want to talk really quickly on what you don’t want to do to play the finance game with other local buyers. Getting into a bidding war with your LGS is not a good way to secure repeat customers and a positive reputation, even if it nets you a few collections or decks in the short term. Name your price, and let the customer decide where he takes his supply.

Even if you pay lower than the other buyers, you can find areas where you can make up for the raw cash with a convenience factor. If someone responds to your offer with, “CardGarden is paying $130 on this lot,” after you offered them $100, so be it. Don’t just one-up them and offer $140 just to steal the business—stick to your original number and let the seller make the call.

Being able to meet up at 11:00 p.m. in a Wal-Mart parking lot on a Saturday night to buy a collection when no one else in town wants to do so has its perks. Being open to buy anything and everything from bulk to basics will allow you to access markets that other vendors and buyers don’t want to get involved in, and it will secure you future lasting relationships that can help build your brand name. Good luck, and let us know if you have tips of your own!