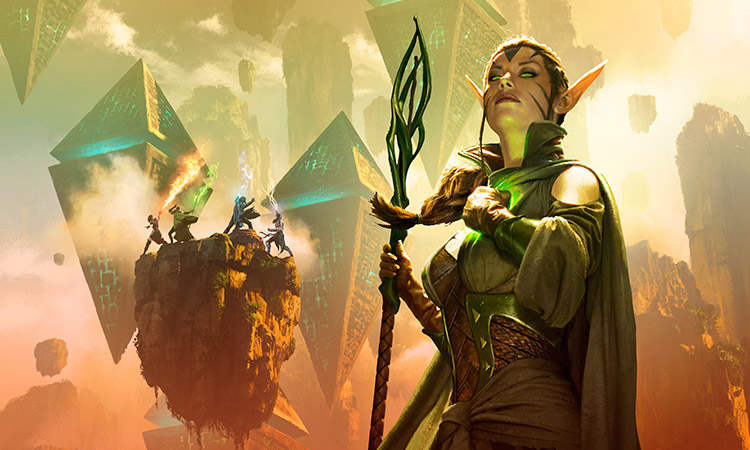 So I’m looking over the decklists from Grand Prix Pittsburg and there’s something noticeably absent: Protean Hulk. While I’m disappointed that all the hype didn’t result in a top finish, there is a lesson here that should already have been learned in the distant past. Cards that search for free things will always break. We should have seen this one coming, well I should say YOU should have seen this one coming, I already have a FOIL playset and 6 or 7 regular Hulks in my Mulch Box.

Cards like this aren’t always beat us over the head obvious because they aren’t usually printed in preconstructed decks with everything needed for a ridiculous combo printed around them. Sometimes that combo is super simple: Stoneforge Mystic + Batterskull. Other times that combo is part of larger synergies like we saw with Ranger of Eos + Goblin Guide or Goblin Bushwhacker in Standard and eventually the various roles the Ranger has performed in Modern. We recently just learned this lesson again with Knight of the Reliquary. How many times have we forgotten about this gal?

If a card can search for something and play it for free or a reduced cost, it’s not a matter of if it breaks, but when it breaks. That’s why I’m still holding out hope for these Woodland Bellowers, but this devoid nonsense is definitely not helping.

Modern can be an incredibly diverse format, but it’s always in a state of expansion and contraction in terms of which decks are truly viable in a fifteen round tournament. When we look at this week’s top eight decklists we see a hefty presence of two of the format’s boogeymen.

Splinter Twin and Affinity, along with burn,  form a trifecta of terror within Modern. Loading up on sideboard hate for one opens you up to a browbeating from the others. This is before your sideboard gets stretched into other directions to curtail the threat of Blood Moon, graveyard shenanigans, or garbage decks like Infect and Bogles. This weekend’s top eight featured three Splinter Twin decks and two Affinity, with more of each rounding out the top 32.

For us this presents a format that is ripe with investment opportunities. For example, there was only one copy of Tron in the top 32 decklists this weekend, so the deck is likely to garner less attention than it has in the past. We have another round of Eldrazi showing up in less than two months with a pretty decent likelihood that SOMETHING ends up being good in Tron; that Kozilek is already looking pretty sweet depending on what those stupid diamond mana symbols mean (more on that later).  With Tron falling out of favor, it’s easy to grab a few staples and ride the rising tide as players flood back into an archetype…it also doesn’t hurt that you’ll have no problems shipping cards like Karn Liberated and Ugin, the Spirit Dragon for years to come.

After this past weekend you’d traditionally see an increase in demand for Splinter Twin and Affinity cards, but with the holidays coming up, it’s typically the season for all prices to slip a bit as attention shifts away from spending money on Magic to spending money on turkeys and appliances our family members will never use.

Once we get past the holiday season the trick is to jump into the right boat at the right time, which is easier said than done. Let’s take a look at a breakdown of each archetype to see where we’re at THIS week:

With fifteen different archetypes (arguably 16 with “Living Twin” (Twinning End -ed.)) we have a pretty diverse top 32 and will have a real hard time convincing anyone (other than PVDDR) that Modern is an unhealthy format. I’m hoping that this means we’ve finally found a “settled” Modern and Wizards will lay off the “shakeup bans” going forward and start unbanning the rest of the more questionable offenders on the ban list.

So this is a thing that happened: 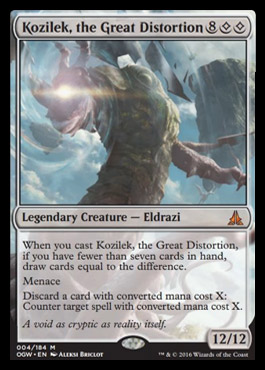 We still don’t know exactly what this means. There are theories floating around that basically range from this being Magic adding colorless as it’s sixth color to snow mana 2.0 to basically anything. I have to believe in that Wizards isn’t stupid enough to create a sixth color and releasing it as a gimmick mechanic in a small set, but that’s a real possibility at this point.

My theory, the one I have to believe is true if I’m going to take Wizards seriously moving forward, is that these new mana symbols should be read as “colorless that has to be devoid of color”. For example, you could cast this Kozilek with eight forests and a Shrine of the Forsaken Gods but not ten forests. This would also go a long way to explain why we still have the pain lands in Magic Origins since they do add colorless mana in addition to the two colors.

There is still the nightmare scenario where these guys are required: 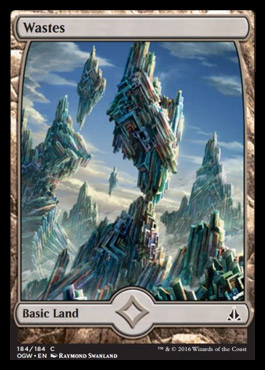 While these would technically be searchable off an Explosive Vegetation thanks to being a “basic land”, they don’t have a basic land type listed so they won’t do anything for all those domain decks you kids like to build. Luckily these were easily explainable within my mana theory as big number “1” looks stupid on a full art card. But then this card showed up: 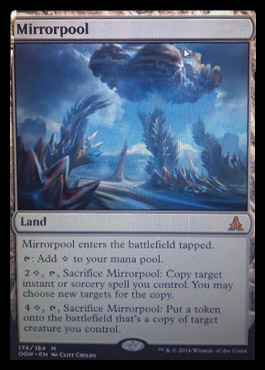 You see that? No “T: Add (1) to your mana pool” on this card, it’s that diamond, so my whole theory gets thrown right out the window and I’m left here banging my head on the desk crying out “WHY? WHY? WHY?” Sure, there’s still the possibility that at common we have a plethora of cards that flesh out the rules for “Wastes mana” but why not include all of this in Battle for Zendikar from the start if it’s just “colorless finally gets it’s own mana symbol”?  This is the question I can’t really answer without immediately asking myself what they were thinking.

It’s all starting to make a lot of sense why Wizards chose to include Expeditions; this block is trying really really hard to just be a massive steaming pile of Eldrazi turds.

We’re probably about as close to bottom as we’re going to get with the expeditions and @nqtnguyen’s photo above really brought this to the forefront of my mind moving forward. While I still think there is time left to get in on the ground floor for these, I have a feeling that once these start disappearing, that it’s going to happen very fast.

My initial thought was that informed buyers were waiting for bottom to buy in to these, but after further consideration I’m revising my timeline a bit, we’re pretty much at bottom now and these aren’t flying off the proverbial shelves quite yet, but we’re left with a gap in our knowledge base that’s going to be filled in soon: Oath of the Gatewatch. There’s twenty more coming and I think many people are waiting to see what they’re going to be before pushing all their chips into the middle of the table.

Once we reach Oath, we’ll see those players that held onto their Expeditions way too long start to begrudgingly sell them off to buy the new hotness but less will be entering the market as the limited format will shift to a single pack of BFZ vs the three we’re seeing now.

Ultimately prices are settling out to be pretty close to my initial feelings. I didn’t see a reality where the Expeditions Scalding Tarn was going to cost 100% more than the original FOIL and we knew it was going to form the upper ceiling when it came to pricing the rest of the lot. We’re looking at a world where the Expeditions Scalding Tarn is around  33% more expensive than it’s predecessor rather than 133%. Here’s a breakdown of where the relevant expeditions are sitting now:

I would expect these to dip maybe another 10% over the holiday and upcoming spoiler season, but after that it should be a slow and steady climb upwards. That said, it’s probably going to take a while (years rather than months) for these to catch up to the insane prices we saw during the prerelease and first week of the set’s release. Remember those $440 Scalding Tarns? That WAS a good laugh wasn’t it?

The reality is that a lot of vendors and retailers have been buying these up and squirreling them away because the prices as they are currently are “too low” in their opinion. Even if there isn’t an organic groundswell in demand for these cards coming, there is an artificially tightening of supply coming so we’re likely to see some decent price movement on these in the coming months.