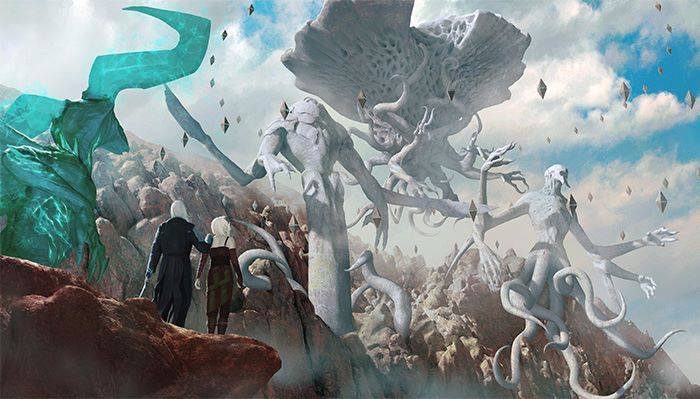 The Eldrazi titans were once frowned upon in booster packs.  The seemingly uncastable legendary colorless creatures started their life cycle as bulk mythics.  As time went on and the increased popularity of “sneaking” creatures into play and Commander, their prices rose. 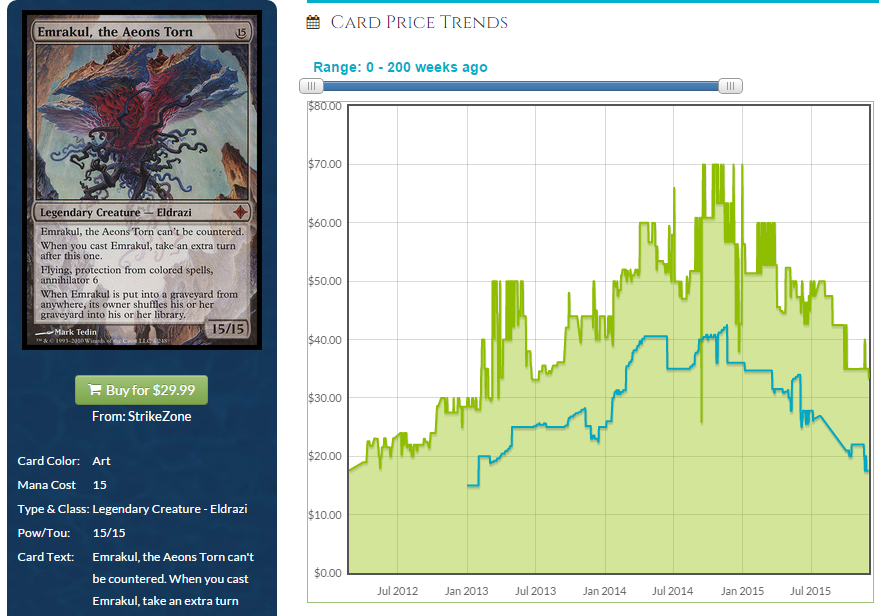 Each of the Eldrazi titans have a slightly different amount of printings.  There are far more Emrakul, the Aeon’s Torn than any other Eldrazi titan due to the fact that it was a pre-release promo (when everyone got the same one).  As you can see from this graph his price largely got out of control until he was reprinted in Modern Masters 2015.  It is unlikely he will ever be usurped as the most deadly creature to attack with and his price is likely to only increase once again from here. 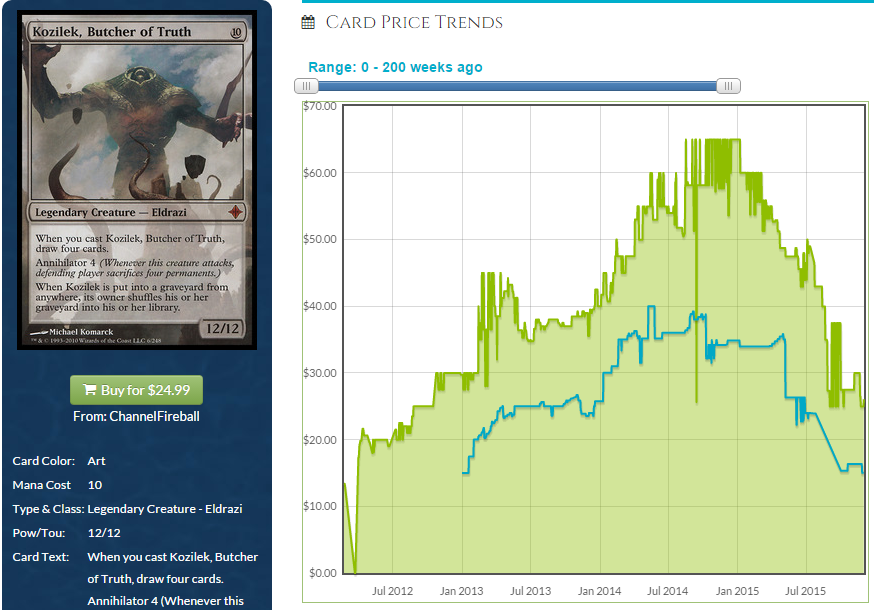 Kozilek is a different beast.  He is the only Eldrazi titan that had not received a supplementary printing until Modern Masters 2015.  His competitive play is almost non-existent but he still reached a $65 price point.  The reprint was brutal for him, dropping him down to 40% of his peak price. 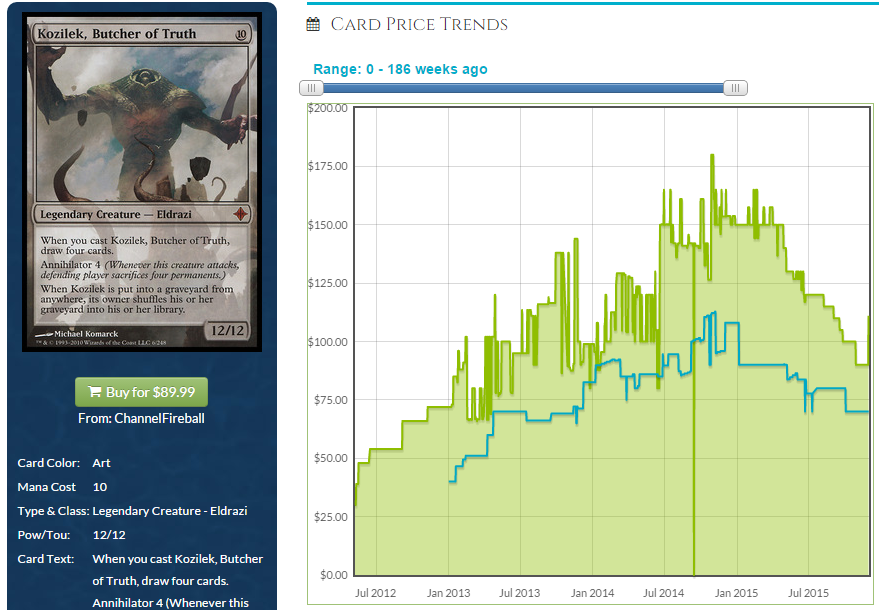 Foil Kozilek, however, faired a bit better.  Due to the generally unappealing Modern Masters 2015 foiling process, the foil version of Kozilek only fell about 50% from his peak price.  I expect supplementary printings in the future to also use a “cheaper” printing process and thus generally be a lot less liked than original printings.  Original printings for the sake of being originals already had a price premium.

What about the new Eldrazi Titans? 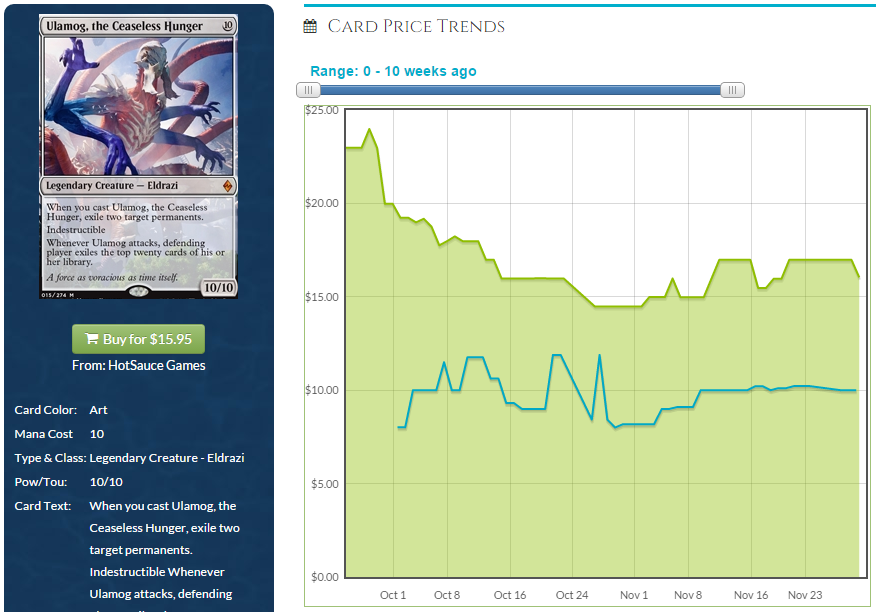 Creatures got a lot better in the 7 years since Rise of the Eldrazi so it only makes sense that newer version of these titans exceed the power level of the old ones.  Without the return of the Annihilator mechanic they are much less good for sneaking into play but their “On cast” triggers are head and shoulders above their predecessors. Ulamog shaved a mana off his mana cost but more than doubled his cast trigger’s effectiveness.  I think this titan is unlikely to get banned in EDH and will become a colorless staple in almost every deck in the future.  For a large amount of mana, Ulamog, the Ceaseless Hunger allows any casual player to remove a problematic permanent regardless of the colors they normally play.  The icing on the cake is that his ability is mostly uncounterable as well.  I’m a pretty big believer that Ulamog will be a great pickup in the next week or two. 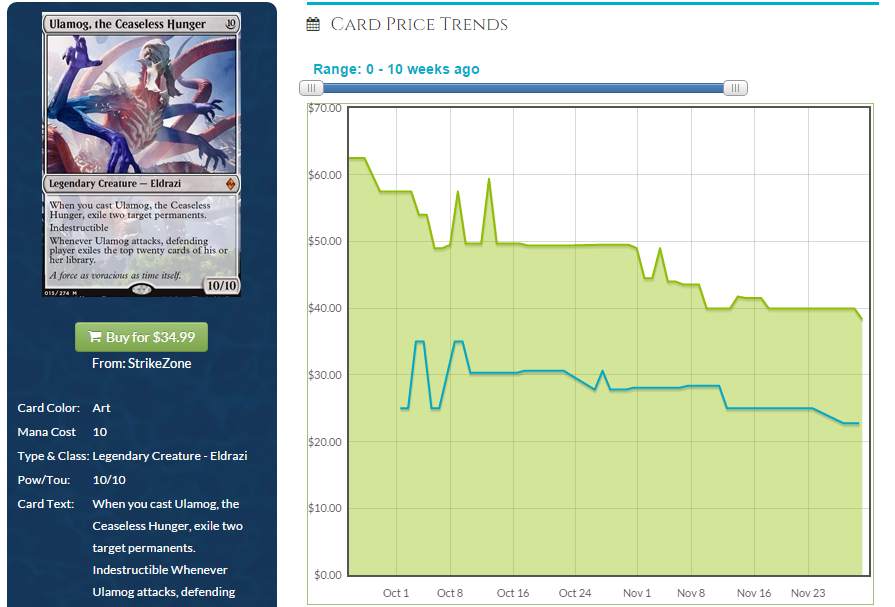 Wait a second.  Why is this Ulamog going in the wrong direction?  A lot of casual players (or Commander players) that would be more likely to purchase a foil Ulamog are also much more inclined to wait for it to hit rock bottom.  Where is that?  I have no idea but I would definitely keep an eye out for the price of this in the coming weeks.  I find it hard to believe it will continue to fall even though it is Standard and Modern playable.  In fact, I think it is likely a better investment if you want to hold them longer term.  We’ve seen from Kozilek, Butcher of Truth, that foil prices tend to fall a lot less harshly in the event of a reprint. 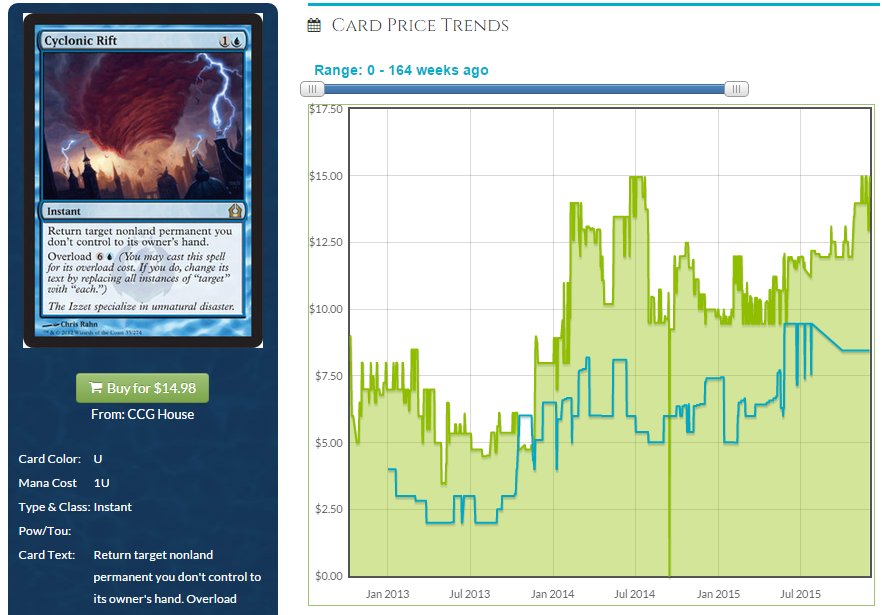 It’s hard to find a more modern (Post Innistrad) casual card that continues to hold value and grow but Cyclonic Rift is a great example.  It saw a reprint in Commander 2014 which crashed the price of the non-foil from almost $7 to $3.  The foil saw a minor stutter and then continued it’s trend upward, regaining all of the ground it lost compared to only the $0.50 that the non-foil gained.  While I’m not exactly sure how they could reprint Ulamog, the Ceaseless Hunger in a supplementary product, it is almost guaranteed to not be foil. 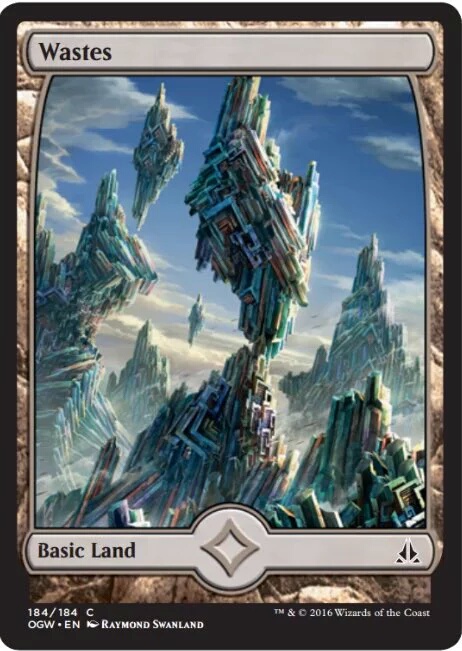 Is this real? My best guess is probably.  How people react to it’s official spoiling is the real question.  While Emrakul, the Aeon’s Torn is banned in Commander, the other 3 titan cards are not (yet).  This could cause renewed interest in making a colorless Commander deck because now you won’t just get completely blown out by Wave of Vitriol (for example).  The official spoiler of this could cause a run on very popular colorless cards and it would be wise to be aware of which Standard legal ones you may own.

As Jason Alt has recommended,  I would keep an eye out on Edhrec.com to see what cards become more popular as newer Commander decks are built.

The week in review: 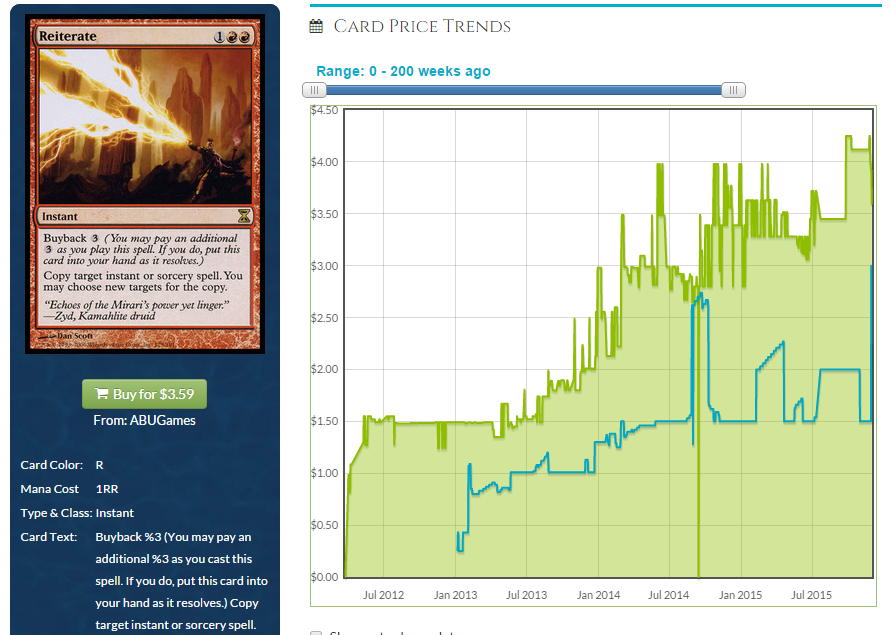 Reiterate is a card that has always had a pretty low supply point and has been maturing nicely over the years but the new UR Commander deck caused a buying frenzy that continues to have very odd prices show up on TCGplayer.  Due to the fact that there are no more Grands Prix for the rest of the year, it will take some time for it come down from the $12-14 price point it is on TCGplayer.  Vendors don’t have a great way to restock this card but I expect it to end up settling around $5-6 when all is said and done. 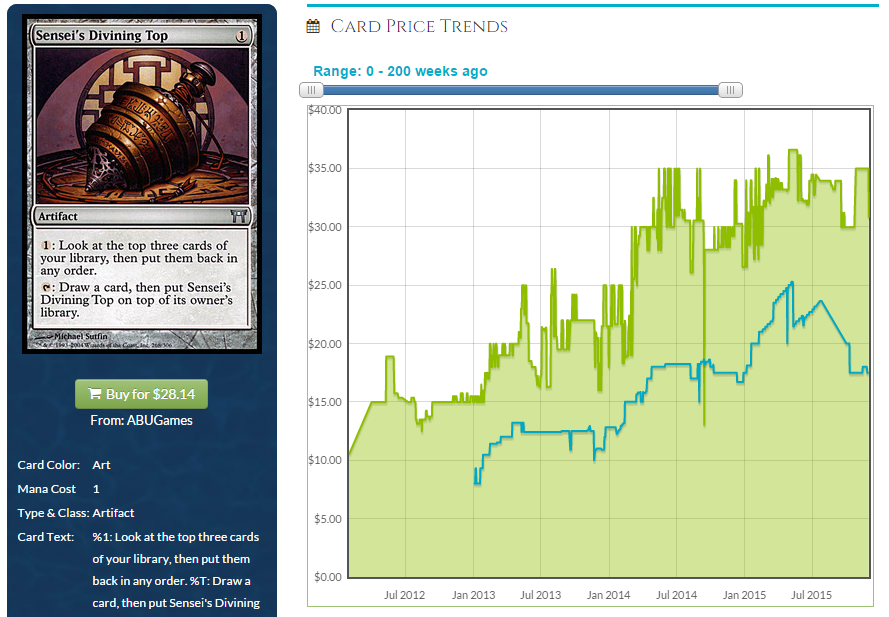 Another SCG Legacy Open caused another wave of complaints about how Sensei’s Divining Top slows down the format.  I will reiterate my point in earlier articles, I don’t want to hold these if they are an investment.  If you play with them it’s not a big deal but keeping a lot of money tied up in a controversial uncommon doesn’t sound like a great idea to me.  I’m not sure it will get banned but I’m not sure there is a lot of reason to take that chance.