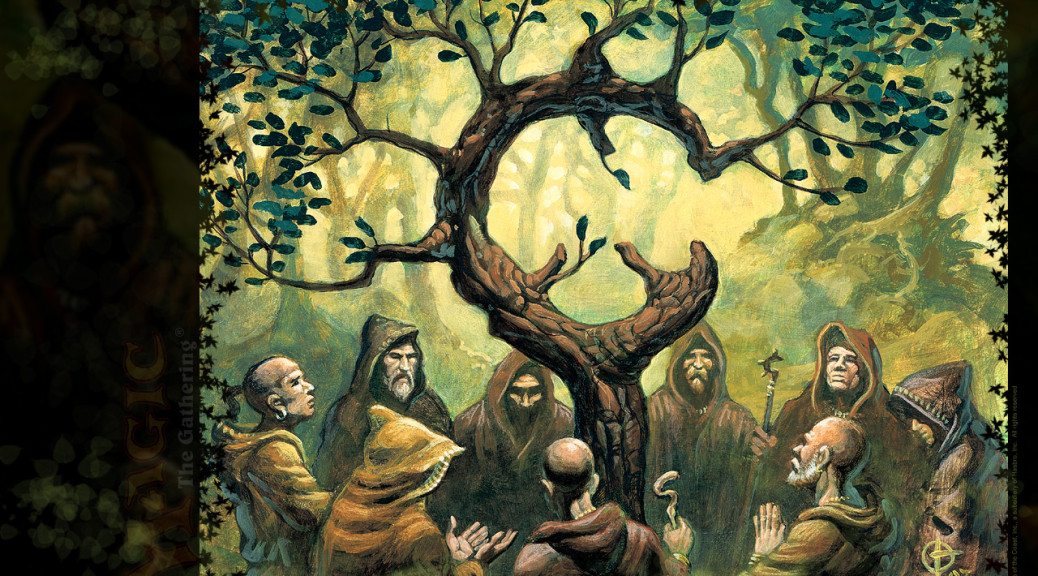 Like a bear that catches the scent of spring it’s time to crawl out of your cave and care about Magic again. I admit that the last couple months have been exceptionally unexciting for me and that I had a real hard time paying any attention to the game. It’s really hard to care about another week of Siege Rhino, but there’s gotta be an end in sight right?

This past weekend we saw some major Modern action in Cincinnati, with 1,000 players showing up to sling some spells. While Wizards of the Coast is still trying to reconcile the discrepancy between the cards they’re trying to sell and the formats we want to play, players and speculators alike are setting the secondary market ablaze.

Leading into this weekend the new hot fire was Bx Eldrazi, or as I prefer to call it: BadTron. This deck capitalizes on the interaction between Urborg, Tomb of Yawgmoth and Eye of Ugin. Eye of Ugin effectively taps for three mana when casting colorless Eldrazi spells…you know things like Oblivion Sower and Wasteland Strangler, add in a few Eldrazi Temples and you have a deck full of Ancient Tombs, minus any drawbacks. While this deck seemed at first to be the next big thing, it ultimately didn’t put up very great results with only a single copy in the top 32.

Turns out that Urza’s real estate combined with his robot butler are just a more powerful threat when it comes to casting big stupids in Modern, but that didn’t stop the speculation:

Yeah…maybe we’re going a little deep combining Relic of Progenitus and the processors we saw in Battle for Zendikar, but it does draw a card! These cards are already coming back down to Earth as armchair vendors are digging through their bulk boxes and draft scraps for Eldrazi Temples and Relics of Progenitus and flooding the market, there’s probably still a time to cash in. If you’re like me, all your Eldrazi Temples cost you was not throwing them away, so any dollar amount is basically pure profit. I expect we haven’t seen the last of this archetype as there is sure to be more “colorless” Eldrazi in Oath of the Gatewatch to benefit from Eye of Ugin’s cost reduction powers, but I’m feeling pretty fine calling this the high tide marker for this archetype.

We’re also seeing the beginnings of another price surge for Modern staples, Scalding Tarn has always been a good barometer of things to come and it’s price is reaching a boiling point…in any other week the 19% increase would be pretty impressive, but it’s buried under a list of Eldrazi nonsense that’s casually up 300%.

Official spoiler season is now under way. So far what we’re seeing out of Oath of the Gatewatch is a heavy planeswalker subtheme and a ton of cards that get cheaper when you (or your 2HG partner) are casting multiple spells in a single turn. While the Surge cards are hardly exciting, the planeswalker related spells so far have been pretty sweet. I know that my five color planeswalker EDH is already out of room, so I may have to break it into a Super Friends deck and a Legion of Doom deck just to contain all the planeswalkery goodness. 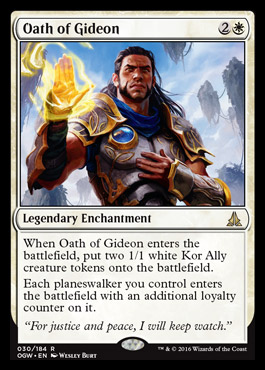 I’m not planning on being particularly crazy for many cards in Oath of the Gatewatch, thanks largely in part to Expeditions making another appearance and the extreme internetification of Magic, but these cards do give us some insight into what people will be trying to build in the future. Just as Battle for Zendikar reignited the fire for Eldrazi related things (looking at you Spawnsire of Ulamog), I expect Oath’s planeswalker accessories to push other planeswalker accessories in popularity. Like what? 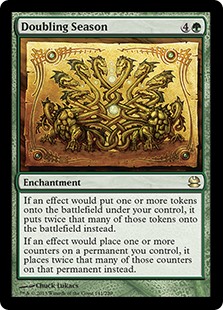 Doubling Season comes from a time before planeswalkers and sort of backdoors the rules based on some quirky wording, but the long and short of it is that your planeswalkers all enter the battlefield with twice as much loyalty which is usually enough to use their ultimate immediately.

Doubling Season is a pretty low-risk spec target because this card has been popular for years and years. The ability to effect all varieties of counters AND token creatures gives this card plenty of appeal. Doubling Season also feels relatively safe from reprinting because we’ve seen Wizards intentionally printing around Doubling Season without being doubling season (Primal Vigor, Parallel Lives, etc). 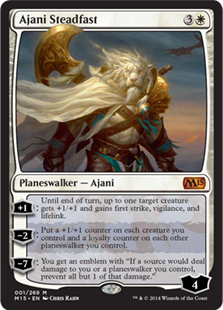 If there any card that says “play with planeswalkers” it’s Ajani Steadfast. Ajani is pretty much every planeswalker’s best friend as he tromps through the multiverse being the exact opposite of every cat I’ve ever known – helpful and caring. Steadfast has been sitting pretty flat with a very gradual decline forever despite being one of the most synergistic planeswalkers you could include in a Super Friends deck. At $6, this sees like a pretty safe pick up as the worst case scenario here is that you still have a planeswalker. 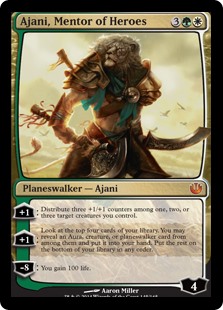 Ajani does what Ajani, Mentor of Heroes does – helps planeswalkers. Like a cat sifting through a litter box, Ajani sifts through your deck hoping to get his sock hooks on some planeswalker friends. Ajani has been pretty stable since rotation thanks to saying things like “put counters on dudes” and “gain a hundo life” but the desire for planeswalkery things might reignite the demand for this iteration of Ajani. 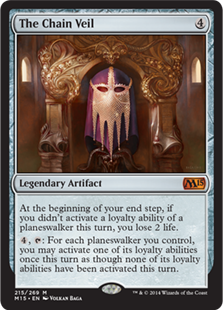 Finally we come to the penultimate planeswalker toy, The Chain Veil. This card is hovering just over a buck and that seems like a modern Greek tragedy to me. Getting double activations out of your planewalkers seems to be living the dream. This card seems like an easy home run if the desire to make planeswalker decks takes hold, and why wouldn’t it? 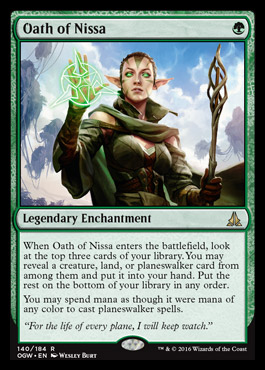 So a green Ponder with the casual bonus of fixing your mana for planeswalker spells? This is a card that I expect to see heavy play in a lot of green decks. I’m honestly confused how this card even exists with Wizards being so heavily against cantrips in general…oh no I can’t delve it away, it must be garbage!

Really looking forward to grabbing a few foil copies of this card and riding them off into the sunset.

Zendikar is home to another tribe that is due for a jump in popularity. 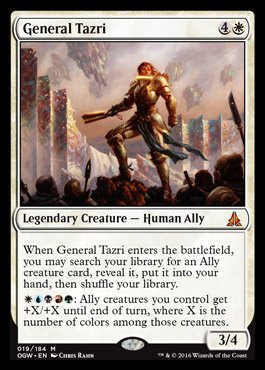 Yes, it is a white card. Yes you can use it as your Commander in a five color ally deck. Thanks to the Bosh rule, legendary creatures can be commanders for decks featuring the colors of mana that appear in their text box. I wouldn’t go crazy buying up all the Angelic Captains you can get your hands on, but there are some sweet allies hiding in Zendikar and Worldwake that are pretty much essential for any deck featuring Tazri as a commander:

A couple of these have already drawn the attention of speculators and reached a few dollars, but most are available under a buck. Sure, Allies.dec is just a different iteration of Slivers.dec but for now it’s the budget version and that gives it some pretty broad appeal. I can tell you with fairly good certainty that my shop is already devoid of allies.

With a number of these rares costing less than $1, there’s not a lot of risk involved in buying a small stack and waiting until the casual crowd figures it out in a few weeks.

There’s been a lot of talk (again) about Amulet Bloom getting a ban because it’s “so good” and “unstoppable”. The deck can do insane things, there’s no doubting that. The stories of a player casting Primeval Titan twice on turn two are spreading like wildfire across the internet…how can such a deck be allowed to exist!? I can have a Primeval Titan on turn 2!? ERMAGHERD!!!

Modern is format with plenty of ridiculous crap happening on turn two, have you heard about Griselbrand? How about Glistener Elf? Both of these cards are capable of turn two kills and aren’t constantly the subject of witch hunts…why Amulet of Vigor? The deck is hard to play, IT MUST BE WITCHCRAFT!!

This time around…it might happen. Wizards doesn’t often listen to people (or reason), but when they do, it’s usually a high profile member of the community and we’ve had no shortage of high profile Magic players saying “OMG Amulet is insane, it has to be banned” on social media. I don’t agree with a ban here if Glistener Elf is allowed to roam free but I’m starting to believe it’s a real possibility. 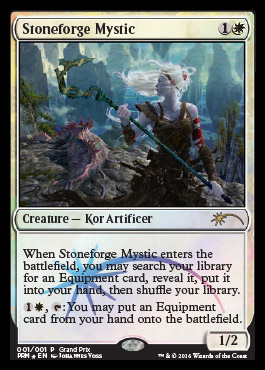 Stoneforge Mystic is your Grand Prix promo for the next year. What does this mean? Wizards hates Legacy and wants nothing more than for it to crawl under the porch and die, so it’s unlikely they’re pushing a Legacy staple as their GP promo which leaves us pretty much one option: it’s going to be Modern legal soon.

I’ve long been a proponent of Stoneforge Mystic coming off the ban list in Modern with one stipulation: Batterskull goes on. We don’t have to worry about Umezawa’s Jitte becoming a problem because it’s basically going to stay banned forever, but Batterskull is the card that broke Stoneforge. Sword of Feast and Famine was sweet, but it was the recyclable 4/4 creature with lifelink and vigilance for two mana that really pushed things over the top and lead to Stoneforge being banned in Standard and pre-banned in Modern before it even had a chance to be broken.

What goes up with an unbanning? Well Stoneforge for a while, it takes a few months for those GP promos to really run their course. The real winners are going to be the most playable swords: Fire and Ice, Feast and Famine, & War and Peace in that order. These are already commander all stars so if they start seeing any Modern play you can expect the needle to move on these pretty quickly.

Or maybe they’re mentally unstable and don’t ban Batterskull immediately, in which case you can expect those to skyrocket.