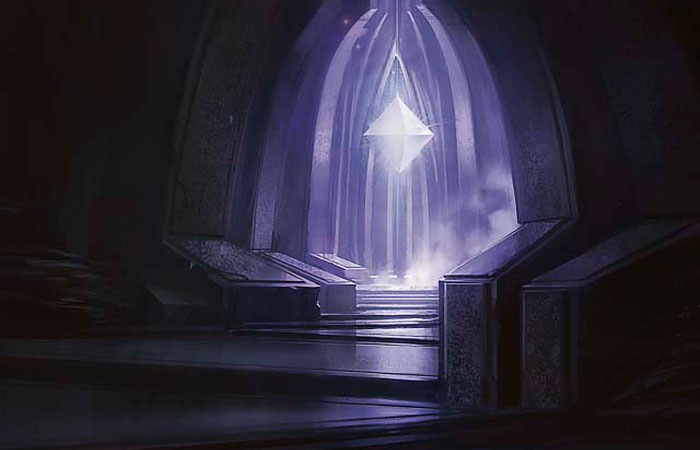 To be completely honest, I can’t say I’m surprised by the outcome of Pro Tour Oath of the Gatewatch. Most probably did not expect such domination by Eye of Ugin and its Eldrazi friends, but the results do likely reflect the most powerful decks in the post-Splinter Twin post-Oath of the Gatewatch metagame. And now we have silly things like this: 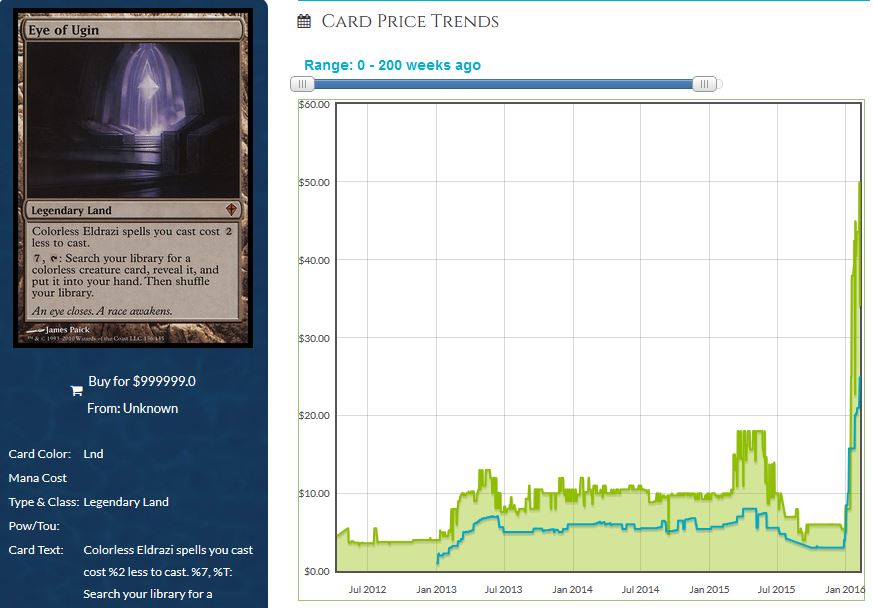 Fifty bucks is a lot for a card that was $6 a couple weeks ago, yet the price movement of course is 100% merited. This is now the deck to beat in Modern and it’ll be interesting to see how prices move from here.

Not all of them. Plenty of Modern mainstays such as Spellskite are fine to hold for the time being. There won’t be Phyrexian mana in Standard again until we return to a plane that matches the flavor, so the next possible reprint will probably be Modern Masters 2017. Non-Eldrazi cards are also fine to hold onto, including your standard Affinity fare as well as Infect, Burn, and the rest of the metagame.

But as for Eldrazi-specific cards we saw this past weekend, I’d say we’re treading on very uncertain ground. The newest block has certainly shaken up the format, and I often wonder if we’re getting a glimpse of what’s to come when Standard rotates. But given the hype, I have to imagine the right move is to sell. Stuff like Endless One will peak very soon, and then drift lower on increasing supply. 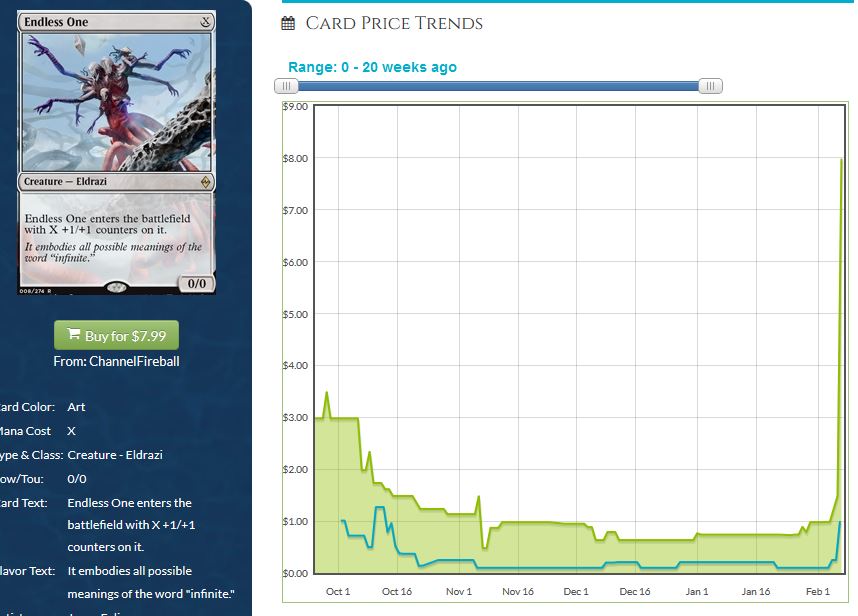 I’m not saying this card will drop back below a buck again, but $8 seems awfully high for a card printed in the same set as Expeditions. I’d recommend taking profits on all these Eldrazi creatures during this Pro Tour hype. Some may rise higher still if they become powerhouses in Standard, but others won’t make the grade and will drop hard from here. Leave the last 10% for the next guy.

Stepping away from the Eldrazi themselves, I’d form this basic rule of thumb: if the card is good strictly because of Eldrazi, then sell into hype. For me, this includes Eye of Ugin, Eldrazi Temple, and Chalice of the Void. All have seen tremendous rallies over the past couple weeks and it would be wise to sell into these spikes. There’s just more upside in other components of the deck which haven’t spiked yet.

Blinkmoth Nexus is a great example – it’s a powerful land in the Eldrazi deck as well as the Affinity deck, meaning a sudden banning of Eye of Ugin wouldn’t ruin this card’s utility in Modern. Simian Spirit Guide is another card that shows up time and again in various decks, and I see no reason to panic sell copies out of fear of banning. Mutavault and Urborg, Tomb of Yawgmoth are also interesting here because they haven’t moved nearly as much as other Eldrazi deck components. 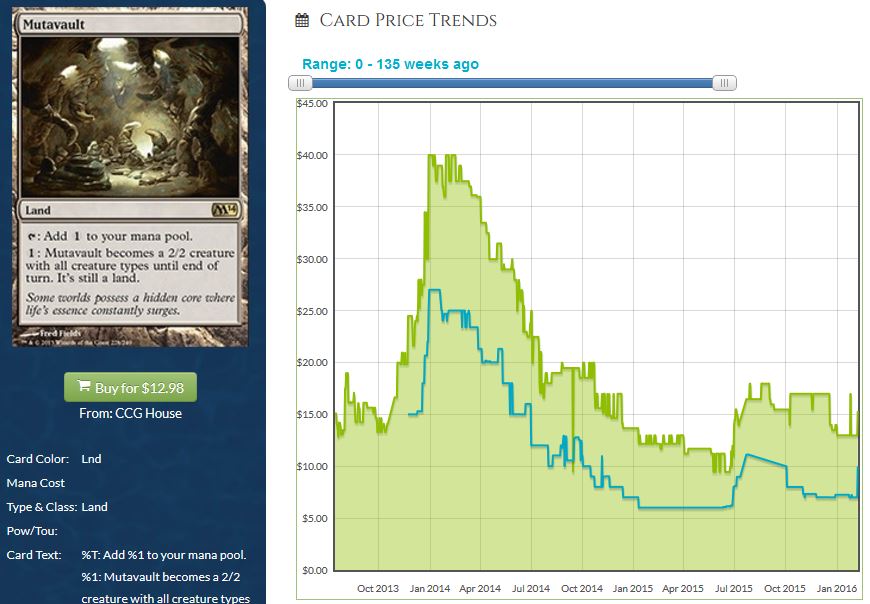 The Writing on the Wall

I woke up Sunday morning and my Twitter feed was abuzz with a single message. Not the Super Bowl, not African American History Month, and certainly not positive things about Modern. Everyone was talking about the lack of Modern diversity in the latest Pro Tour.

The reality is, Modern – at least for now – is not a diversified format. Going forward, I strongly suspect the metagame will be broken into three buckets of decks: Eldrazi, Affinity, and decks designed to beat Eldrazi and Affinity. A healthy format this is not.

But I don’t blame this trend on the banning of Splinter Twin and Summer Bloom. Those bannings made sense in a perfect vacuum, but I believe Wizards of the Coast failed to realize the impending changes Battle for Zendikar and Oath of the Gatewatch would bring to the table. It’s almost like they had forgotten Eye of Ugin and Eldrazi Temple were cards when they decided to print three mana Eldrazi. I remember reading an article years ago when Rise of the Eldrazi came out suggesting that Eldrazi would remain balanced as long as their converted mana cost remained substantially high. The column specifically called out concerns of having an Eldrazi creature with converted mana cost under five and Annihilator. While Wizards was sage enough to eliminate the Annihilator mechanic, they did not heed the other half of that statement’s advice. 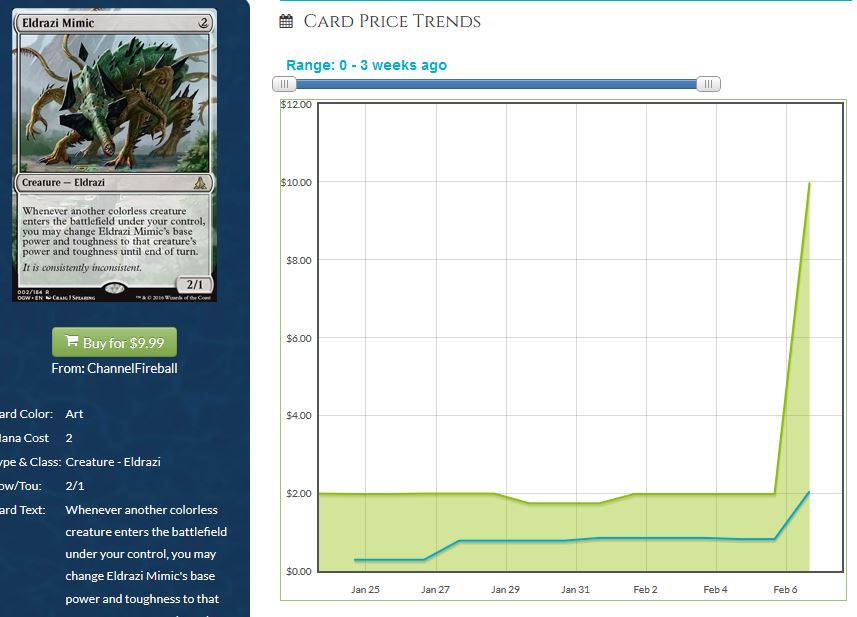 Seriously? Did Wizards of the Coast flat out forget that Eye of Ugin was a card?! If Ornithopter is playable in Modern as a zero mana 0/2, then a “zero” mana 2/1 that has the potential to go huge later in the game is a serious powerhouse. When you look at the 3-drop Eldrazi cards the list of intimidating creatures becomes even longer – and all of them cost two less thanks to Eye of Ugin. I’m not one to cry “conspiracy”, but either WOTC forgot about Eye of Ugin and Eldrazi Temple, they didn’t care about the interaction, or they purposefully did this to showcase Magic’s newest two sets. “You insist on having a Modern Pro Tour? Fine, we’ll find a way to still ensure that Pro Tour showcases Magic’s newest cards!” Just sayin’…

Now we’re stuck with this overpowered interaction, and the clamoring for bannings has already begun. This is yet another reason why I say it’s wise to sell all Eldrazi-specific cards. It’s not just that they’ve already jumped significantly in price. It’s also because the downside risk to bannings is extreme right now. Take it from the guy who played Birthing Pod in Modern and sold Bloom Titan months before the banning – these are painful to endure. Don’t be left holding $50 Eye of Ugins. Please, I beg of you, sell your copies. Even if Eldrazi is now playable in Legacy, Eye of Ugin can’t sustain a $50 price tag on Legacy alone. If it’s banned, it will go the way of Splinter Twin. 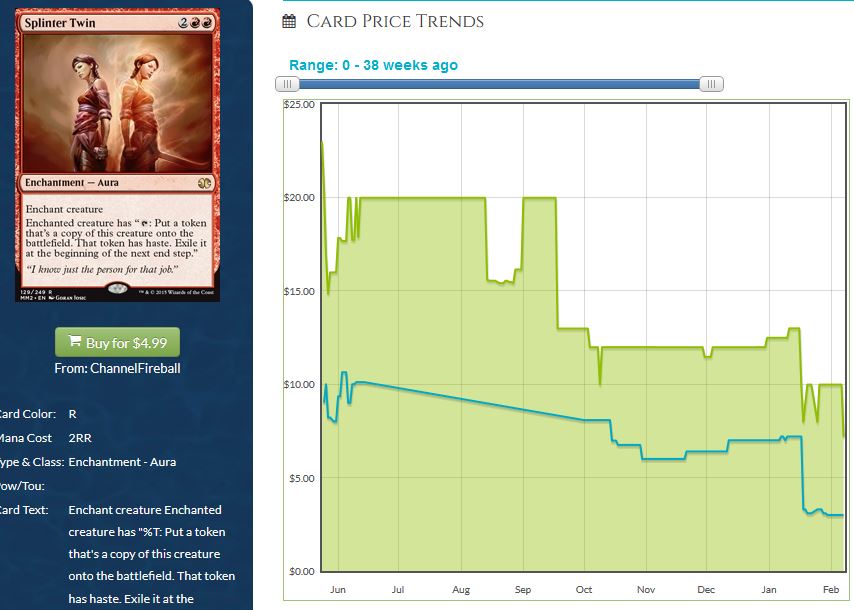 Most of you know by now that I’ve quit playing Modern. Once the rumblings of a Summer Bloom ban surfaced, I grew cold feet and sold the deck. Now that the deck is wiped from the face of the earth, I’m reminded how vulnerable Modern cards are to long term changes. It’s not a place I want to park money for the long haul.

Just because I don’t play Modern, however, doesn’t mean I don’t have a few small bets in Modern cards. My top picks have been All is Dust, Spellskite, and Ghost Quarter. I also have a few Verdant Catacombs, though it’s really interesting to see how many fetches made the Pro Tour Top 8 (hint: 8 Scalding Tarn and that’s it). Any card that has tremendous versatility in Modern is still a terrific hold. Spellskite and Ghost Quarter are especially well-positioned right now and I plan on sitting on them for a bit longer.

But other than the above, a handful of Shock Lands, and a smattering of stuff I opened from two MM2015 boxes, there’s little I’m holding. As cards fluctuate in price and jump to the upside, I’ll be looking to sell. It’s just too dangerous to hold Modern cards for the long haul unless they are sleepers and penny stocks. Reprints and bannings are too painful.

Here’s a reality check, just to put in perspective my “come-from state”. I did actually make a couple purchases throughout Pro Tour weekend. But for the first time in years, I didn’t make any Pro Tour related purchases. What did I buy? Two Unlimited Sedge Troll, an Unlimited Meekstone, an Unlimited Crusade, an Unlimited Drain Power, and an Unlimited Balance. Crazy? I think not – these have all been drying up on the internet and I wanted to make sure I had copies for my collection before they became silly expensive. In the case of Balance, I bought in just in time. 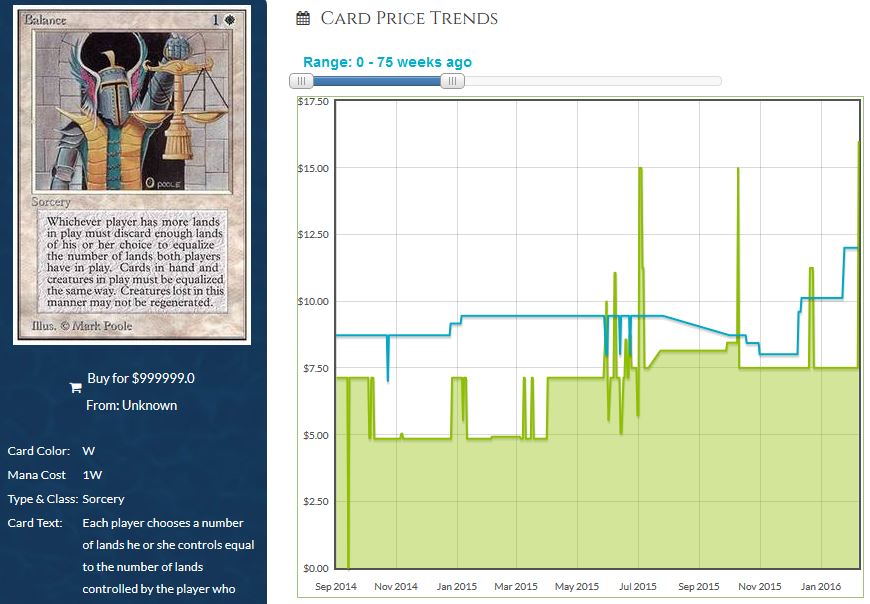 The chart above isn’t fully conclusive. You can see the recent steps higher in buy list pricing but not the full picture. Go ahead and search online for Unlimited Balances and tell me how many you find. On eBay I see an auction bid up to $20.50 and a Buy It Now listing for $60. On TCG Player, I see this:

I see zero copies on the rest of the U.S. Internet. This is a card I’d want to buy – I can hold it confidently without fear of reprint or banning. It’s not vulnerable to silly Modern metagame shifts and it offers tremendous upside. The last copy sold in the $10 range and now the card is trending towards 2x-3x that price. Getting in front of trends like these is a much safer way to invest in Magic.

Did you buy into Eldrazi specs before the Pro Tour? Well done! You’re likely sitting on a gold mine. But don’t let that gold mine become a strip mine by holding too long. These cards are worth significantly more than they were two weeks ago, and the data is screaming “sell.” Take advantage of the opportunity to cash in. You’ll lock in some valuable gains while also significantly reducing risk to the likely banning that will come.

If you adamantly believe these cards will still rise significantly higher, then I’d recommend at least shifting your exposure to cards in the Eldrazi deck that also see play in other lists. Spellskite, Urborg, Mutavault, and Blinkmoth Nexus all offer exposure to this list without being all-in on the Eldrazi strategy. There are definitely smart ways to go about speculating on the new Modern format, and signing up for exorbitantly high risk is not my style.

What if you want to play the Pro Tour Eldrazi lists in some upcoming Modern tournaments? That’s a tough call then. Surely if you want to win, you’ll probably want to play one of these Eldrazi variants. But this offers up maximum exposure to an emergency ban. If you must purchase these cards to grind out some Modern events, at least recognize with eyes wide open that you’re signing up for sizable downside risk. If you look at this risk as the “cost of entry” into Modern now, then maybe you can rationalize the purchase. As for me, I’ll stick with my silly 6-mana 4/6’s (as Jim Casale put it on a recent podcast) in Old School MTG. Stuff like Unlimited Sedge Troll offer significant upside as well, but without all the fear and concern around reprints and bannings. That’s my kind of format!

11 thoughts on “PROTRADER: Reactions to Pro Tour Oath of the Gatewatch”