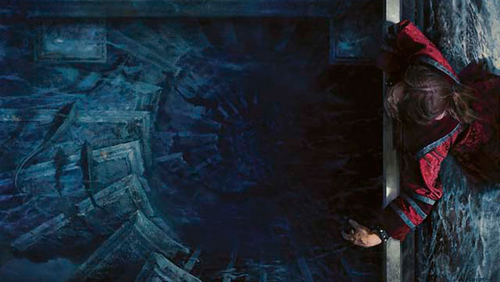 Okay, it’ll probably contain a lot of stuff that pertains to the Pro Tour. What I mean is I’m not going to try to perform some fancy analysis of the decklists and then tell you to sell Eldrazi Mimics, Eye of Ugin, and Chalice of the Void. That should be fairly easy to figure out, and it’s probably too late to capitalize on the maximum possible value by the time you’re reading this. You should be aiming to sell on Saturday Night and Sunday, after the top 8 lists get posted. I sold Chalices at $50 on Saturday night, but I also sold Simian Spirit Guides at $6 each while I slept. Oh well.  Anyway, today I’ve got sort of a hodge-podge list of things I want to talk about, to bear with me as we skip around a bit throughout the article.

I’d like to start out by thanking those who defended me last week, and those who contributed thoughtful and rational disagreements without resorting to ad hominem. I appreciate all of you for reading my content, and constructive criticism is always welcome.

Let’s revisit Spreading Seas, and see how that card ended up after last week’s article. The minuscule supply of foil copies on TCGplayer and SCG finally ran dry in the couple of days leading up to my article’s release, and the card has been sitting comfortably at $20 for the past few days. Interestingly enough, Seas didn’t have any effect on the Pro Tour; it was far too slow to contest with a swarm of turn 2 kills through combat damage. While I would love to list mine on TCGplayer so I can try to sell before the race to the bottom, I’m putting my inventory on ice for my trip to Georgia this week.

If you own any foils, I suggest selling out now to anyone who is brewing a list to try and wash away the Eldrazi menace. You made your money if you bought in a week ago, so start racing to the bottom and cash out now while the card is still appetizing as a way to hate on Eye of Ugin. 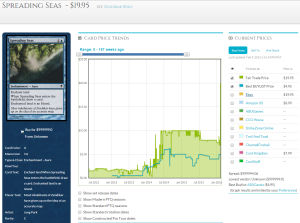 Non-foils managed to stay under the radar, and the TCG mid price has managed to avoid moving by more than a few cents. However, if you dig a little bit deeper into the actual listings, you’ll see that there are very few copies left at the $1 that the TCG price would have you believe; SCG has about 150 at $1.50, and I’m keeping a close eye on that count in preparation to sell mine on Facebook. A large majority of the listings are for at least $2-3 for near mint, and I don’t suggest buying at that price whatsoever. Let me make this clear. I DO NOT SUGGEST BUYING THE MAGIC: THE GATHERING CARD FROM THE ZENDIKAR EXPANSION PACK, FOR OVER $1.00 USD IF YOU ARE ATTEMPTING PURELY TO LATER SELL THE CARD FOR A PROFIT. (Danny: this sentence feels really weird to read to me, not sure how to fix it)

If you’ve been hoarding Seas for the past few years and setting them aside from collection picks, bulk trades, or being your own buylist in the community and picking them up at $.25, this is our chance to shine If the retail on Seas “officially” hits $3, you’re going to want to open the floodgates. A lot of the desire to include this in the current meta comes from Eye of Ugin being a big bad wolf, and any targeted bans at the deck also hurt the financial potential of Seas. Move ’em now, and be happy if you can get $2 retail on local Facebook groups or $1 buylist eventually.

While we’re swimming around in the original Zendikar block, let’s take a look at another couple of enchantments that caught my eye. 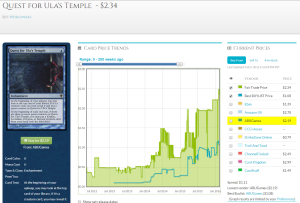 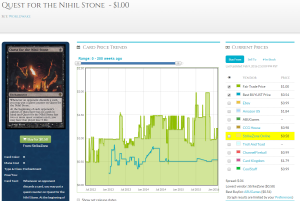 Both of these are enchantments from the good old Stonesculptor set, which was released six years ago (You might remember that as the year Inception and Toy Story 3 were released). They both appear to have significant casual appeal at first glance, because players will always want to build Megrim and Kraken decks in kitchen table land. I’m going to predict that one of these cards will probably be $5 in a few years, akin to Sigil of the Empty Throne before it got throat-punched with a double-reprint. The other will continue to stagnate and be mostly forgotten about; even without a multiplayer reprint product. Will it be the discard win condition, or the fish finder?

Here’s my theory; Quest for the Nihil Stone, even though it appears to have a casual appeal, will be ignored by casual players because it doesn’t beat out The Rack, or Liliana’s Caress (by the way; the fact that Caress has gone this long without a reprint is astounding, and I wouldn’t be holding onto these any longer than you have to) in the casual and competitive Rack decks. The deck has enough win conditions without Nihil Stone, and I’ve never actually sold one out of my dollar box even to the people who play discard religiously. While “people I’ve met” isn’t exactly the most statistically relevant sample size, I have never met a single non-competitive player who actually gives a crap about Nihil Stone, and I hang out with a lot of kitchen table players.

On the other hand, Quest for Ula’s Temple makes a great argument for a “why is this card $5” a few years down the line. If you pick up Magic and you want to smack nerds around with giant sea creatures, you need this card. You need four of this card. Nothing else drops free sashimi onto the field like some good old Ula’s Temple. With Kiora still alive and swimming after getting beaten by the Eldrazi harder than a Pro Tour competitor, it’s entirely possible that we see her again later on in the story. With more Kiora comes more big fish, and a few more people itching to make the sea monster deck.

Even with the world-specific name, the casual appeal of this card makes it very easy to jam into a supplemental product. To be honest, I was surprised that it wasn’t in the Commander 2014 mono-blue deck until I actually double-checked my work. While it obviously won’t see a reprint in a standard-legal set due to the time-specific setting of original Zendikar, it could possibly be jammed into a duel deck or Commander product along the way.

“But DJ, doesn’t that mean foils are the easy long term play here? A foil version wouldn’t be printed in a supplemental product, so it would avoid the price drop of a reprint entirely.”

Not exactly. While Modern and Commander staples are generally strong foil targets, the pure casual crowd wants to stay away from foils almost entirely. These players just want the cheapest version of the card to help make their zombie deck come to (un)life, and the foil multipliers on cards like these with minimal Commander appeal are extremely low. One of my favorite examples is Lich Lord of Unx; 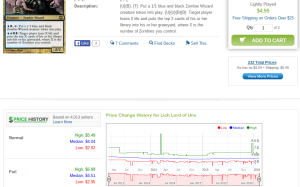 Other prime candidates for low foil multipliers are Captivating Vampire and, that’s right, Quest for Ula’s Temple.  While foil copies are likely to avoid getting hit by the Yu-Gi-Oh! hammer, they’re just as unlikely to be going up in price at the same ratio as the non-foil. They’ll also be just as hard to get rid of; you’ll probably have to sell them off at the same price as non-foil just to get the kitchen table players interested.

Remember how I mentioned that Laboratory Maniac was suddenly a $4 card, and I didn’t mention why that was? I was scrolling through my Facebook feed last week, and I saw someone in the casual Magic group wanting to build a deck with Lab Maniac and Inverter of Truth. While this isn’t exactly going to go head-to-head with the Pro Tour lists, it’s definitely another Leveler-esque shenanigan that will usually give you a couple of extra turns left to put the Maniac on the board and win. They curve into each other well enough, and the Inverter can bring back a Maniac that you milled earlier while digging with Thought Scour. Both of those sentences are what a kitchen table is going to tell you right before they buy your Lab Maniacs for $4 each.