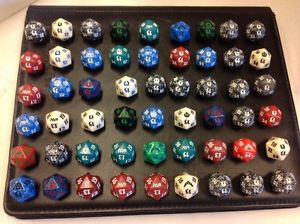 Hey there, you! I recently reached out on Twitter asking for article ideas, because I’m at a bit of a loss for words. Final exams are coming up, so I’m trying to juggle the whole “school” thing with staying on top of the Magic finance market for your benefit. I appreciate all of my readers who sent me great ideas, so I’m going to splurge this week and try on touch on a little bit of everything instead of saving these up for multiple article ideas like a rational human being. If I end up hitting my head against the computer next week on the night of my deadline, I’m sure I can just fart out another piece of god-tier penmanship about how I should be swimming in Mayor of Avabruck right now if I knew anything about this game. Let’s roll. 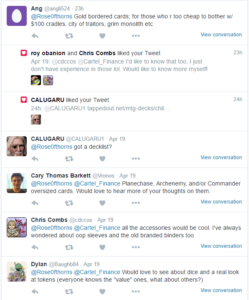 The Little Boar that Could

So this little piece of ham is something I’ve been wanting to write about for a while, because it’s just so innocuous at first glance. Is it Modern legal? Nope. Legacy playable? Not even close. Commander appeal? Basically none. The trick here is that it’s actually legal in the Magic Online Pauper league, where it’s printed as a common and sees a little bit of play in Green Stompy lists. There was a Reddit thread on the mtgfinance subreddit about a week and a half ago that gave some excellent insight into why a card like this can appear to be at $7, so I’ll just link that here instead of paraphrasing and regurgitating it up here. /u/another-reddit-guy had some excellent insight into a format that none of the rest of us “financiers” really pay any attention to, and its’ absolutely worth keeping your finger on the pulse of the trends in Pauper if you want to make sure that the next Brindle Shoat doesn’t slip through while you pick bulk. 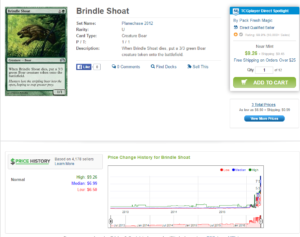 However, a slight bump in pauper popularity obviously isn’t enough to cause this kind of increase in price. Supply is absolutely a factor, and we can talk quickly about just how low that number is for Planechase. You know that stupid joke I always repeat when mentioning the scarcity of a card? I say that there were basically six packs of Coldsnap or whatever opened, so the supply is extremely low and easy to dry up if even a small spark of demand appears for the card. That holds especially true for all of the cards from Planechase and Planechase 2012, where even the uncommons can be treated as super mythics considering how low the print run was. 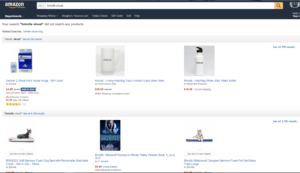 Even Amazon has no idea what that card is. That’s not to say Amazon is the hotbed where all the Pauper aficionados buy their “battle boxes” (a new term I learned recently), but you know that supply is a barren desert when there’s a combined total of less than a dozen copies on eBay, SCG, TCGplayer, Coolstuff, Amazon, Cardshark, and Channelfireball combined. Normally I just say “Oh, wait until people start pulling these from their bulk and listing them online, the price will settle at a degree between the pre-spike price and the post-spike price.” This time, I’m not sure there are enough of these in bulk to satisfy that growing Pauper demand. If you’re in the market for these to build your battle box, I’d still avoid paying anything over $4 though. 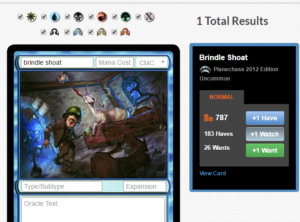 So if an uncommon that sees play as a two of can hit $7, surely the planes from the same set are equally as popular…. right? Well, not exactly. I mentioned this week on Cartel Aristocrats that you should probably go through any of your old oversized Commanders or Planechase cards, and see if any of them are worth anything. After doing a b it of digging, it looks like the real money is in the 2009 and promo planes, not so much the 2012 versions. While this information probably won’t be relevant for the next few collections you buy (I think I’ve only bought three or four collections in my life that had Planechase planes or Archenemy schemes), it’s definitely something that should encourage you to go through your own old stuff if you’ve been playing since these were released. The same goes for the 2011 Commander oversized cards; Kaalia goes for around $8-10 for the supersized version! 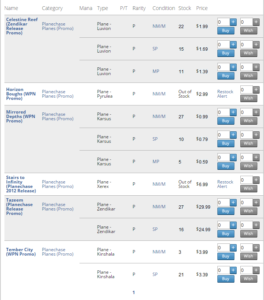 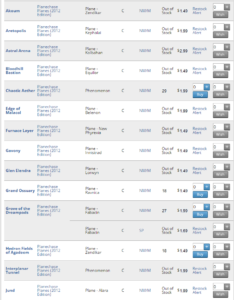 So you ran into your basement, pulled out twenty Stairs to Infinity, and you want to turn them into crisp dollar bills. I understand. I was in your situation not too long ago. While I was doing some cleaning last year, I found a pile of schemes and planes from my days as a casual player, and decided to buylist them all to save myself some trouble. While you can technically sell them on eBay or TCGplayer, I can’t speak for how quickly they’ll actually sell. There’s also the added trouble of shipping single oversized cards; They obviously don’t fit into a regular toploader, so you’d have to get creative with the packaging to make sure the card doesn’t get damaged in transit. I had success selling all of mine to ChannelFireball, as they paid the best prices out of all the stores I looked at. 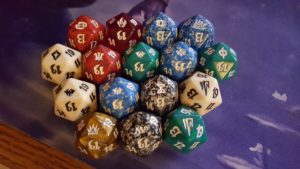 While we’re on the topic of supplies, I’d like to talk very quickly about spindown dice; the kind you get From a Vault of Some Kind, or perhaps a week before a set releases. In my experience, I saw a lot of people throw these away at the last prerelease I went to. I know because I threw mine away, forgetting that it even came with the box. Whoooops. Anyway, that’s okay. The D20 spindowns that come with the prereleases now aren’t really worth anything; most buylists will pick them up for 25 cents each, so don’t feel bad if you can’t find them.

The real fun comes if you have any of these lying around that are from pre-Innistrad era. Most of the spindowns that you see in the picture are $4 or $5 if you check on SCG or Coolstuffinc, except for a couple that I mispriced (can you guess which ones?). I ended up getting around $40 for this lot when I sold them on Twitter, which was a nice buffer to the collection that these came in around a month ago. If you’re an old timer and were around for the “good old days” of Magic (or so I’ve heard, I was like eight years old at the time), you can sell the spindowns from Apocalypse, Onslaught, or  Judgment for around $25.

Just another side note about shipping before I take off for the week; Ship spindowns in a PWE at your own risk. While I’ve talked to a few friends about their experiences mailing dice in envelopes, they’ve had mixed results. Some post offices will be comfortable mailing it as a non-machinable letter with just a stamp or two, but my local USPS made me ship it as a small package so I ate $2.50 shipping a single one of these at $5. Gross. Thankfully I was able to ship the rest to a single individual and save a ton on shipping, so find that one guy in your local area who wants to catch ’em all.