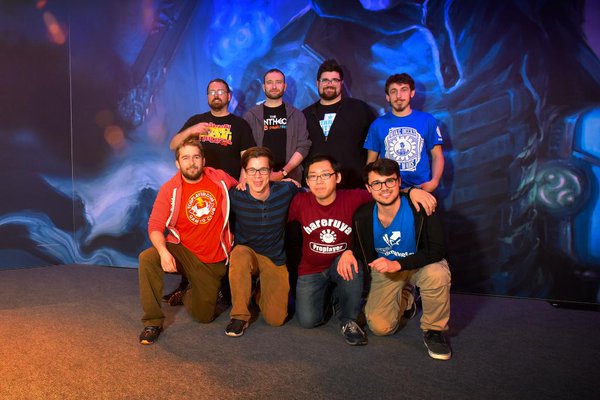 With six of a possible eight copies of Archangel Avacyn in the finals of this Pro Tour stop, the powerful angel seems poised to hold her value heading into the next few weeks of Standard. Also worth noting that there are numerous copies of Canopy Vista in the combined mana base of the finalists, as well as a full eight copies of Sylvan Advocate, a creature that seems likely to be ubiquitous this season.

G/W tokens as played by Rubin called out on camera by LSV again as the deck of the tournament, with Team FacetoFace credited for the deck.

In Game 1, the board stalls out pretty quickly, but Rubin has the dynamic duo of Nissa and Gideon behind his army to create massive advantage. A top decked Secure the Wastes sets up a huge swing on the back of a double buff from the ‘walkers and Rubin takes Game 1. A match win here could possibly push Nissa over $15 and Gideon back over $25.

Whoa. Massive changes to the benefits of Hall of Fame and Platinum Pro status, effectively reducing their guaranteed earnings to fund a more bombastic World Championships. Can’t imagine the top pros are going to be too pleased about that, and Hall of Fame benefits shouldn’t be negotiable after the fact.

Game 2 plays out in similar fashion. In a small board stall, Rubin ultimates his first Gideon immediately and hides out behind a growing Hangarback Walker. Mengucci is sitting on two copies of Reflector Mage, while Rubin awaits the moment to launch a surprise attack with Archangel Avacyn. Drawing into another Secure the Wastes with the Gideon emblem in play, allows Rubin to wreck an all out attack plan from Mengucci by dropping a pile of token blockers in their path, though he does end up at eight life. A Westvale Abbey activation on the following turn however, and Rubin is in position to take the game in the air.

Game 3, our first game post-sideboard, ends up looking very similar in the early turns, but Mengucci does manage to leverage Tragic Arrogance to force Rubin into a slimmer board presence. Rubin is able to cast Hangarback Walker for zero to try and flip a newly require Avacyn, but Mengucci answers with an Avacyn of his own, dancing through the hole in Rubin’s plans by saving his entire board. Rubin ends up with multiple Walkers in play, but Andrea ends up with the only Avacyn on the board, and looks to turn the corner. Rubin however top decks Dromoka’s Command, and threatens to kill Avacyn and cash out a Walker for multiple fliers. Mengucci chooses to cast a second Avacyn in response, saving the first copy, but yielding to the Walker tokens. Steve then top decks his own Tragic Arrogance, taking out Bounding Krasis, Avacyn, and Jace, Vryn’s Prodigy, and allowing him to cash in his second Hangarback Walker for additional tokens. Mengucci responds with an activation from a fresh Jace, flashing back his own Tragic Arrogance to trim the board once again for Rubin.

Rubin’s next big play is a Nissa, Voice of Zendikar, which starts making tokens but Mengucci fills up from a Collected Company and a Nissa, Vastwood Seer, and pushes through to move to 1-2 on the match thus far.

Game 4 finds Rubin on Nissa on Turn 3, holding off attackers with plant tokens long enough to find enough mana to cast an end of turn Archangel Avacyn, into a Gideon, Ally of Zendikar which immediately sacs for an emblem. Fearing only a Tragic Arrogance from Mengucci, Rubin makes another plant token, and challenges Mengucci to find an answer to a dominant board position. A Reflector Mage from Mengucci on Avacyn, prompts a flurry of activity as Rubin strives to find the opening he needs to get the last four points of life from Andrea in the air. Rubin subsequently sacs Nissa to boost a growing team of plant tokens, Sylvan Advocate and Avacyn, and tries to decide when and whether to sacrifice some of that army to put the demon prince into play. He ultimately chooses to swing with the entire team first, forcing a round of bad chump blocks from Andrea. An Ojutai’s Command from the Italian seeks to keep him alive, but it isn’t enough and Steven Rubin and G/W tokens wins Pro Tour Shadows Over Innistrad!

LSV calls out G/W Tokens as one of the best performing decks of the Swiss rounds. In Game 1, Narset appears from Seth to answer early action from Rubin in the form of a pair of Thraben Inspectors. Narset survives for several turns and does a ton of work on camera, rebounding a Dark Petition that seeks out important kill spells and answer both Nissa and Gideon from Rubin. With an Avacyn in hand and a lonely Westvale Abbey on the table, Rubin soon finds himself facing down a trio of planeswalkers, including Narset, Sorin and Jace, Unraveler of Secrets with a combined loyalty of seventeen. Manfield quickly takes over and claims Game 1.

In Game 2, Rubin gets a mix of threats in play, including Hangarback Walker, Sylvan Advocate and Gideon, Ally of Zendikar. Seth gets off a Languish to slow the advance, but leaves Gideon in play, a potent threat that is quickly followed up with an end of turn Secure the Wastes that finds Seth without a counter spell. Rubin evens things out at 1-1.

In our third game, having taken Languish out of his deck against a tokens deck, Manfield uses two early copies of Anguished Unmaking to get rid of Nissa and Gideon respectively and try to keep the board under control. Rubin rebuilds with a Sylvan Advocate and a second copy of Nissa, Voice of Zendikar vs. a hand of Sorin, Ultimate Price and Ruinous Path. The Path takes down Nissa on the following turn, and Manfield digs for additional answers with his Jace, Vryn’s Prodigy. Rubin gets an Avacyn on the board which is sent to the bin by Ultimate Price. An Oath of Nissa finds him an additional copy of Gideon, Ally of Zendikar, which Rubin uses to table a 2/2 knight token only to get hit by another copy of Ruinous Path. Sigarda, Heron’s Grace is the next threat to enter the fray and Seth follows on with Sorin, Grim Nemesis to trade off. Hangback Walker for three from Rubin presents a tough threat for Manfield, and on the next turn Rubin finds Westvale Abbey off the top with five creatures already in play. The resulting demon quickly takes Game 3 for Rubin.

In Game 4, Rubin keeps a land heavy hand, and finds his early Nissa answered by counter magic. Kalitas, Tratior of Ghet enters on Seth’s side, but Rubin has the Stasis Snare off the top to answer. Manfield however manages to field a second copy of the legendary vampire and the impact on a pair of Hangarback Walkers is felt immediately. Jace, Vryn’s Prodigy and Narset, Transcendent join the squad for Seth, and Rubin is clearly stalled out, while Manfield adds Sorin, Grim Nemesis to fully take control of the board against a pair of Thraben Inspectors. Game 4 to Seth and we move on to the deciding game.

Game 5 sees Rubin get two Hangarback Walkers into play, prompting an early Languish that fails to deal with Nissa or Gideon. Anguised Unmaking does take down Gideon the following turn, but continued pressure and a fresh Archangel Avacyn takes the match for Rubin, who moves on to the finals.

Mengucci takes the match in five games, putting the Bant Company deck that the field thought they had outmaneuvered into the finals despite their best efforts. It is worth noting that in the Swiss rounds, only Lee Shi Tian managed a 9-1 record, and he was also on Bant Company. Also, depsite not making Top 8, U/W Humans in the hands of Raymond Cheung and Mono White Humans from Pat Cox, did each achieve an 8-2 record.

Mengucci wins the match in

Despite a series of grindy games, where Pyromancer’s Goggles and World Breaker both put in a good work, Steve Rubin defeats Brad Nelson 3-0 on the back of Avacyn and Westvale Abby and advances to the semifinals, having won three games where he tabled very aggressive starts.

BREAKING NEWS: WoTC uses the platform of a very diverse Standard Pro Tour to announce that Modern will no longer be a Pro Tour format, throwing the growth of Modern specs into question. My guess is that this could shave some growth potential off of non-staples without having much of a meaningful impact on Modern staple card values directly. If however, we see the de-emphasis of the format trickle down to  the GP and local level as fewer top players have a reason to play more Modern, the threat to Modern specs could be heightened. Details here.

Andrea Mengucci defeats Jon Finkel 3-1 and advances to the semifinals!

In Game 1, LSV starts strong, only to run into multiple early kill spells and a Languish that clears the board. The explosive power of the GB deck is proven again however, as LSV casts Collected Company end of turn, finding a Husk and a Cutthroat, to untap and kill Shoota on the spot.

In Game 2, Shoota manages to trade kill spells for early creatures, minimizing the drain damage along the way from Luis and setting up a shop with a rampant Dragonlord Ojutai helps the Japanese player pull away for the win.

Game 3 sees LSV go to six cards on the play, and again his early threats are efficiently answered with the likes of Grasp of Darkness, Ultimate Price and Foul Tongue Invocation. Despite an amazing series of plays by Luis where Liliana, Heretical Healer put in some good work, Shoota finds a copy of Languish and lands a Dragonlord Ojutai to set up a nearby win.

In Game 4, Luis only get a chance to field a few early threats before Shoota clears them out with his opponent flooding out on lands. LSV loses the match and moves on to the coverage booth.

Hold on to your hats folks, this is going to be good.

Heading into this Pro Tour many observers seemed convinced that the metagame had been solved early and that Bant Company and White Humans were going to settle into the top tables. Instead we got an incredibly diverse field and a Top 8 full to the brim with eight distinct decks and a plethora of innovative brewing technology. The Top 8 competition may be the best of all time, with three Hall of Fame members, a former Player of the Year, and the current World Champion.

So far, the big financial movers of the weekend have included a bevy of underrated cards including Pyromancer’s Goggles, Seasons Past, Dark Petition, Cryptolith Rite, Languish and Hissing Quagmire. With such a diverse field, it may take a finals appearance to defend the price spikes, so we should pay special attention to the cards like Dark Petition, Languish, Archangel Avacyn and Goggles that have shown value across multiple shells. That being said, selling into the hype ahead of the results is almost certainly your best bet, as back sliding on many of the spiked cards is quite likely this week. Of the cards that haven’t really moved, Nissa, Voice of Zendikar and Narset, Transcendant may have the most upside as three to four of inclusions in their respective decks. At $18 or so, Dragonlord Ojutai has six copies in Day 3 across two distinctive Esper Control shells, and has peaked over $30 before. World Breaker is currently around $8, but could hit $15 again if it makes the finals, especially given that the card is also setting up shop in Modern.

To recap, here are our Top 8 deck types and their notable cards:

Full lists can be found here.

Our match-up ladder starts as follows: