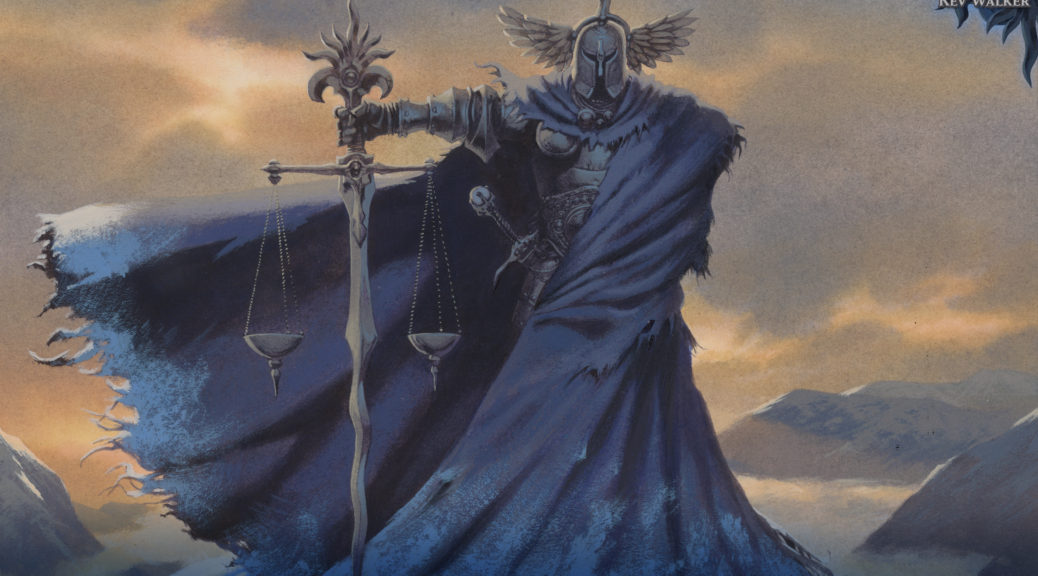 Going with a bunch of small topics today, rather than one big one. You know the drill by now.

ANALYTICS VS PERCEPTION: One of the biggest differences between Magic and other sports (YES, I SAID IT JOCKS. COME AT ME.) is that Magic has a fear of analytics. This is not a new phenomenon; WotC actively tried to obscure information as early as Alpha, putting an Island on the rare sheet and not publicly disclosing set lists or rarities. Currently, Wizards is throttling results coming from Magic Online as a means of slowing the solution of constructed formats (that we are also in a downturn in large paper events is coincidental, but adds to the issue). Sports, on the other hand, is experiencing a renaissance of sorts based on analytics-driven content and the ubiquity of fantasy sports.

The major difference, of course, is the pieces that are used to play the game. Professional athletes are playing mostly-solved games (“score more points!”), with differences in strategy and philosophy that are largely just nuance compared to the classic match-up of Red Deck Wins versus Blue-White Control. There is also a large industry built on the generation, analysis, and applications of the statistics generated by games played, both internally and among the public. In the case of Magic, the crunching of those types of numbers is believed to have a teleological outcome of winnowing down the viability of various archetypes until the format in question is “solved” (either in the case of there being only one “REAL” deck, or there being an equally unfavorable ‘Rock-Paper-Scissors’ scenario). Also, whereas sports teams and leagues are selling the product on the field, Wizards is more accurately selling the players. It’s in WotC’s best interest for you to think that there are lots of good cards available, and know nebulously that some are better than others, but once there is a clear best, it diminishes sales, attendance, and interest (or so they say).

What is interesting to me right now is what fills the void in this circumstance. Esper Dragons had a Top 8 spot in the Pro Tour, and just won the GP in Canada. Sounds like a good deck, right? Except that those two results are actually outliers in the broader context- of ten Esper Dragons players at the PT, the Top 8 deck was the only one to even make Day Two. Similarly, the Esper Dragons decks that didn’t make the Top 8 in Toronto did terribly. The perception that this deck is good, heck even just playable, is backed up by perceived results and simultaneously refuted by analytics.

Those of you who remember Ghost Dad1 from Ravnica standard will see the correlation- a deck that was over-represented relative to both its quality and power level (even in relation to similar decks such as Hand in Hand). Of course, Magic’s community is much more connected and communicative than it was back then, so these incongruencies are likely to be solved, but it is an interesting quirk to the current system.

Let me know what you think about this- is Esper Dragons just bad, or is it yet to be optimized? How much should WotC allow in terms of  information that can be mined for data? Is it better or worse for the game?

DREDGING UP THE PAST: Today is the absolute last chance to buy in on Golgari Grave-Troll, Bloodghast, and any of those other Modern staples if you haven’t already. I’m not sure that this is one of the best decks in the format yet (more on that later), but when Dredge is good it is GOOD.

Check and see if your store has any of these left floating around (this is not the one with Remand, so your odds are better of stumbling across them). This box has Life From the Loam, Isochron Scepter, Eternal Witness, Golgari Grave-Troll, Golgari Thug, a FOIL Niv-Mizzet, the Firemind, as well as a bunch of cheap but playable in casual rares like Doomgape and Gleancrawler. Buying these at $20 is a steal, considering that the Loam and GGT are about to put you even already. Golgari Thug is often a 4x in Dredge, and I’m pretty sure you get two of them. There are even Pauper staples in here!

Sadly the only supplemental product with a Bloodghast in it also had Verdant Catacombs, so you probably won’t find any of those anywhere in the wild (if you do, look for Rat’s Nest also).

Some of these Dredge decks appear to also be playing Prized Amalgam, but that is probably going to be one of the last things to tick up as there are no other real points of demand. It also doesn’t seem like the deck NEEDS that card to succeed, so it could possibly be cut (the deck doesn’t need a threshold of black creatures since we don’t have access to Ichorid).

Now, here’s the next level play- memorize that set symbol.

It’s unlikely that your local [BIG BOX RETAIL STORE] has any of these in boxes left, but it’s POSSIBLE that the cards are still available there. Most national big box chains don’t actually buy product from WotC, they instead deal with middle-man distributors, who are in charge of managing the supply. These are the folks who stock and restock, and who often remove old product that gets repackaged or otherwise reintegrated into their system. One of their ways of moving this repossessed product is through clear boxes that typically contain 4 opened pre-constructed products. These aren’t official WotC offerings, but are instead the distributors unloading stuff that they don’t have a use for. If you keep your set symbols list handy, you are likely to see that maybe a few of these are left in the mix.

WHAT IT TAKES IN MODERN: This is somewhat related to the last two topics. How many decks are there in Modern? According to my preferred Top 8s aggregator (MTGDecks.net), there are exactly fifty listed archetypes (one of which being the catch-all classification of “Rogue”). If we assume that all of these decks are equal in both their quality of construction and pilot AND equally represented in a given field (they aren’t),then each deck has a 2% chance of winning [TOURNAMENT X]2. But given that that isn’t the case, it is important understand that the decks that are higher than 2% are pulling away from other decks, rather than staying at an artificial floor of 2%.

Barring extreme examples like the Eldrazi decks from PT Oath, Modern decks are not going to have the same high percentages of Standard decks, just because there are so many more options. If there are ten real decks in Standard (some formats have had more, some have had less), then your theoretical floor is 10%. For a Modern deck to reach 10%, it would have to entirely invalidate four different archetypes to the point that they are effectively 0%.

The best case for us as finance-minded folk is for that wobbling top of 2% equity to not topple over- meaning that the most amount of cards have at least a percentage of the market as a whole. Of course, this also reinforces my personal philosophy of not buying too deeply into Modern, because you’re either betting on new decks to enter into the pie chart (further reducing that percentage), or upsetting it by causing one deck to overtake points from so many others and spiking (which can, as recent experience tells us, result in a significant banning).

Let me know what you think about this last topic, as we are going to be going pretty deep into it next week. For science!

1A deck name that has only gotten worse given current events.

2This is a really cool name for a tournament.

2 thoughts on “PROTRADER: A Mixed Bag of Modern and Math”