I hope everyone had a great weekend of Eternal Masters releases! I’m currently crying over the insane amounts of value I lost with the release of the set. I was speccing so hard on a certain spec target, and I lost all my spec money when they reprinted my speculation into the speccing ground. Ugh. 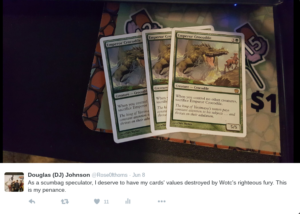 Jokes aside, I had a pretty solid weekend. I was literally the only player in my 8-man pod drafting blue, so I ended up with this monstrosity of a deck on Saturday. The Counterspell and Peregrine Drake are foil, for added value. (After some advice on Twitter, I ended up playing 3x Plains and the Swords+Faith’s Fetters to a 4-0 success). You’re not here to hear my tournament report though, so let’s talk a little finance. 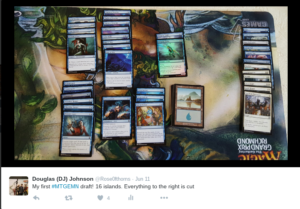 While we’re on the subject of Eternal Masters for the first time ever in this column (We probably won’t come back to the set unless we get to talk about bulk rares), so let’s discuss foils for a quick minute. 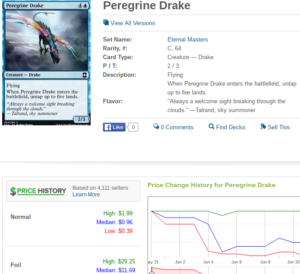 Remember that foil Peregrine Drake? While it was great at stealing games in the sky, it was also worth drafting for value because I don’t hate money. I quickly skimmed the TCGplayer website while I was building my deck, and glanced at the median price. $12 bucks looks pretty sweet for a foil common, right? Even if we look at the article written a few weeks ago by a certain handsome #MTGFINANCE person, we can safely assume that the Median is a slightly incorrect way to determine the true value of a card. Pretty much every card we normally look at with a TCG median of $12 can be realistically sold for around $9….. 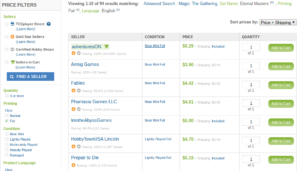 Oh. I guess that’s a thing. (In case you were wondering, yes that’s a foil Peregrine Drake listed on TCGplayer for $.29 by Adventureson. Someone made a tiny mistake). Other than that minor outlier, we’re still looking at a ridiculous spread difference between the TCG median and the lowest available buy price. If you find someone on the hunt for EMA foils, you’re definitely better off trading at TCG median for cards that aren’t Eternal Masters foils. There are people out there who will revere TCG median as their bible, so it’s technically possible if you can actually find other human beings to trade with. I personally haven’t traded cards out of a binder for other Magic cards in multiple years, but you do you.

If you’re really lucky (or using some sort of Pucatrade bot), you might be able to ship out a copy for Pucapoints but you’ll be dealing with a significant amount of competition from everyone else who cracked a box and wants to fufill the dream of getting all their money back.

On the other hand, this is a great situation if you’re in the market for EMA foils. While we’ve mostly passed the all-time low (I paid $20 for a foil Maze of Ith on eBay, and it felt good, you’re still not in a terrible spot to buy foils for you cube, Commander decks, or long term speculation. While the TCG median is an arbitrary number that we can’t technically attach a real market value to, it still feels really good paying 25-40% of that number when so many sellers are desperate to recoup their value from Pandora’s Booster Box.

DJ, You Said Something About Cube

Oh, right. Last week I talked about Bulk Rare EDH, and this week I’m gonna talk a little bit about my adventures of building a cube by picking through thousands of bulk rares. I set a few rules for myself similar to the EDH restrictions, but I couldn’t find a way to realistically only use rare non-basic lands that were all under $1.00 without the cube being a pile of garbage. I mean, the 360 card list will still probably be close to garbage value-wise but I do want it to actually be fun to draft repeatedly. It’s for that reason that I ended up taking out the Land Cap and friends cycle, which I’m sure my drafters will forgive me for. 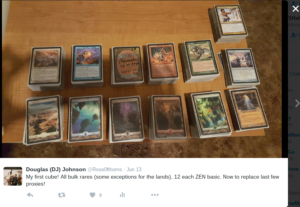 If anyone’s interested in looking at the list and telling me how I did, it can be found by clicking this link. The rules are:

Every cube needs sleeves. With the amount of shuffling, table sliding, and flicking these cards are going to get, it’s important to get a set of long lasting sleeves that will protect the cube for an extended period of time. Even though almost all the cards in my cube are near-worthless, I’d prefer to avoid having them ground to powder and having the HP cards be indistinguishable from the NM ones. Speaking of condition, another benefit of building a cube was that I got to use up a ton of the MP and HP bulk rares lying around that I couldn’t put into my $.25 bulk rare boxes. Most of my non-competitive players don’t like beat up cards unless they’re getting $5 Gilded Lotuses off me, so my damaged bulk ended up gathering dust in a 1k box. 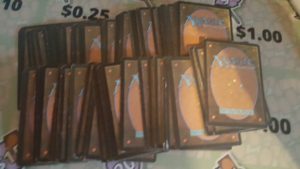 Anyway, sleeves. Right. So a few months ago, I knew that I wanted to build a cube but I was too busy with school stuff. I also had to resleeve all my EDH decks, so I wanted to buy a large quantity of high quality sleeves in bulk. After asking around and doing a bit of research, I was determined to try out the Hareruya sleeves I had been hearing about. I dropped the money required to order two cases from Japan (enough to sleeve five Commander decks and a large sized cube, with enough leftover to sell to friends who couldn’t attend Grands Prix). It ended up coming out to $4 per pack of 50, which is a better deal than any $10 packs of 100 Dragonshields that I’ve been using for the past couple of years.

I’ve been thoroughly impressed by the quality of the sleeves, although I can’t speak to their endurance when used for 5-6 hours a week at lengthy events. While I bought these back in April, you can still find them readily available by the pack at a Grand Prix for $5 per pack if you don’t have plans to drop a hundred dollars on sleeves. 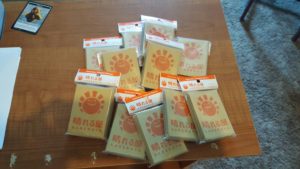