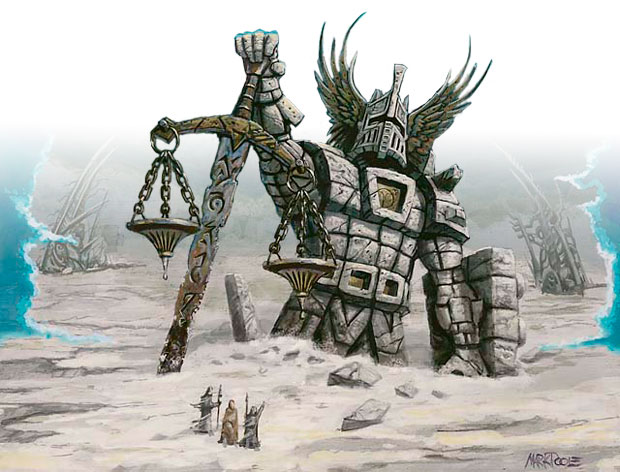 A couple of weeks ago Ari Lax put out videos on SCG of him playing this deck in a constructed league. After 5-0ing, he was impressed with how the deck performed, stating that it had pleasantly surprised him. Fast forward to a couple of days before this weekend’s Modern GP, and he sent this tweet:

Current GP Dallas dilemma: Play a good deck, or play mediocre deck that I win a ton with and is absurdly fun.

Ari ended up playing the fun deck, which was Restore Balance, and went 10-5 with it. His two-sentence Twitter tournament report was “Deck is great. Like really great and only has room to improve.” No damning by faint praise here! The deck functions similarly to Living End, that is cascading into a Balance at instant speed, as early as turn two thanks to Simian Spirit Guide. (Don’t worry if SSG gets banned though; it’s rare that you actually want to Balance on turn two. More often than not, SSG is used for turn two Blood Moons.)

As a Time Spiral rare with no reprints, Restore Balance is about as good as it gets spec-wise. It’s from one of the least-opened sets in Modern, is extraordinarily powerful in terms of the raw impact on the board, and is perfectly unique: there is nothing that replicates or approximates its function in the format. The closest you can come is Living End, but that strategy plays out dramatically differently, as it depends on the graveyard, the red zone, and doesn’t pressure your opponent’s mana base and hand nearly as well.

While the right time to buy Balance was in 2013 when it was still under $2, there’s still some meat on the bone at $4 to $5. Given the supply profile, $5 isn’t an inflated price for a card that sees occasional tier three play. If the deck ever takes off — whether because it actually starts winning events or because Saffron Olive writes about it — $20 wouldn’t be an unreasonable price point. And if the deck ends up legitimate tier 1.5? What’s Ancestral Visions right now, like $40? $50? I’m staring at my pile, drooling, waiting for the day.

Hands down the most thrilling (depending on your perspective) thing to come out of GP Dallas was Skred Red winning the whole thing. Skred is a one mana instant that deals damage to creatures based on the number of snow permanents you control, and can quickly find itself the hardest hitting damage spell in the format. Skred doesn’t go upstairs, but it’s unrivaled in efficiency and scaling.

Skred is a common though, and foils have been $10 for nearly a year, so there’s not much to work with there. Scrying Sheets was exciting Sunday morning, but by Sunday night it had already doubled, and given that the deck only plays two copies, it’s probably not worth getting involved with.

Koth of the Hammer is worth keeping your eyes on. He’s been above $7 since Dragons of Tarkir, but supply is low and excitement is high. If Skred ends up as something more than a flash in the pan, we could see him climb as high as $15, which makes him a tantalizing pickup at the trade tables.

The most interesting card out of Skred Red is probably Snow-Covered Mountain. It’s been printed twice, once in Ice Age and once in Coldsnap. As a common land in two sets supply is definitely on the higher side, but keep in mind that lists run in the neighborhood of 20 copies. 20! On most specs it doesn’t matter how powerful the card is, you’re only ever playing four copies in a deck. But since Snow-Covered Mountain is a basic land, it shows up at five times the frequency of any card in the deck. That changes the equation considerably.

Copies are floating in the $1.50 to $2 range right now, and have been drying up rapidly since Sunday evening. Coldsnap copies will be preferred, since they’re cleaner looking than the Ice Age copies, but either will suffice for players looking to build Skred Red. (Why is this deck not called SkRed?) Once the dust settles these could land in the $4 to $5 range if the deck is playable, and possibly north of that if it’s a true contender. The fact that they’re a nightmare to reprint (where is WotC going to put them?) only makes them that more desirable.

Skred Red may have taken it all down, but Grixis Control was in second place, packing a full set of Ancestral Vision. Vision is the least understood and least familiar card in the list, and has since its banning done less than was initially expected. Of course it hasn’t been completely absent from the metagame, with token appearances in occasional in leagues or T64 lists.

A high-profile finish such as this will remind players that yes, it is legal, and also shore up the price. Of course, it doesn’t need much shoring up. This has been in the $40 to $45 region for months; basically since it was unbanned in April of this year. This brings up an interesting question though. If the card has seen only marginal play at the absolute best, but its price hasn’t flinched, what’s going on?

I suspect this is predicated on the idea that the card is in fact busted, and just because it isn’t dominating Modern today, it doesn’t mean it won’t be tomorrow. Essentially, people that own copies are fine not selling for less than $40 because they think they’ll be able to get at least that much down the line.

This makes it tougher to work with for us, since we’re not seeing the price relax enough to start picking up copies. Still, we can tell there’s something of an expectation and desire for this card to be a pillar of Modern. I sold all my copies when it was unbanned, but if I had any left, I’d be hanging onto them here.

While Skred Red may have been the from-out-of-left-field deck, Dredge is still a newer archetype in Modern. It’s been on the fringes since the format’s inception. Golgari Grave-Troll’s unbanning stoked the flames a bit, but it was the printing of Cathartic Reunion that poured on the gasoline. Dredge has been a tier one contender since.

Throughout all of this, GGT’s price has been surprisingly stubborn. His lowest point was early this year during Eldrazi Winter. There was some action leading into the Eternal Masters release, and then again some time after Eldritch moon, but perhaps most surprising of all, he’s been on a decline since the Kaladesh release. You would think that the arrival of the best dredge enabler in Modern would put upwards pressure on the best dredger in Modern, right? Magic finance is weird some days.

With Modern Masters 2017 approaching next summer, a lot of cards are going to be reprinted. Cards like Bloodghast may make their first Modern Masters appearance, and the reprinting of other accessory cards would add to the appeal of dredge as a deck. So long as the mechanic stays out of MM3 — which I expect it will — we can fairly safely assume GGT isn’t in line for a reprint at any point. If Dredge as a deck continues its strong performances, perhaps with a big W once or twice, we could see GGT double or even triple in price as other parts of the deck become more accessible.