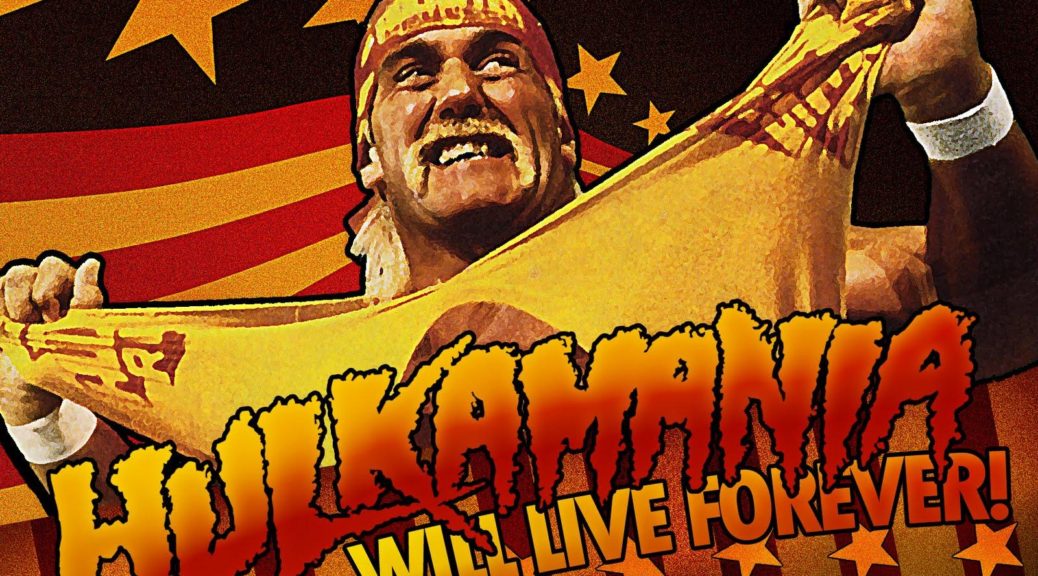 #&$@ Leovold. I don’t care, don’t let the door hit you in your three toughness. Buff-ass bureaucrat, sitting behind a desk shaking hands with his 3 toughness. Like he needed to be a 3/3 for 3, like his stats matter. Like he would be unplayable in Legacy if all he said was “Your opponents can’t cast Brainstorm or win with basically any combo deck.” Like people would say “I don’t know, a 1/1 for 3 is a bad rate for my EDH general when all his text box says is ‘If you resolve Teferi’s Puzzle Box, no one but you gets to play Magic.'” Eat a bag of elf $^%&, Leovold.

That said, I made a lot of money off of cards that Leovold made expensive and while I don’t think any of those cards will tank too much because of price memory and the post hoc justification about how they’re all played in Nekusar,  Nekusar himself actually is trending up in price because Legacy and Vintage are making up the bulk of his demand and with the elimination of Sensei’s Top, people are going to lean on him harder than they did before. Leovold, you made a lot of people a lot of money and for that we thank you. If your demand continues to increase, maybe my LGS will clear out a few more of the boxes of Conspiracy they accidentally overordered and can’t get rid of.

Out with Leovold and in with a card that may or may not have belonged in card jail – Protean Hulk. For those of you who don’t know what Protean Hulk does, he basically enables combos that are so convoluted that my favorite story about Protean Hulk is from 2005.

People were playing a Flash-Hulk deck in what I have to imagine was either Extended or Legacy at a GP. Day one, everyone was scooping to a resolved Flashed Hulk because the Hulk player would get a bunch of cards and say “I win the game with my combo” and the other player would say “Darn, you won the game with your combo. I hope you don’t win the game with your combo next game.” Day two was veritably lousy with copies of the deck because it got so many free wins. On day two, people started to say “Please demonstrate the combo for me” and then the Flash Hulk player would start to say “Well, I go get these creatures and then I combo” and if you asked “How does the combo work?” or said “I use Mogg Fanatic to kill a creature in response” some players would demonstrate the combo properly but others would burst into flames and you would get the free win instead of them.

Protean Hulk sure does enable a lot of combos. But which ones? And how? I’m going to be honest, I don’t really know as much about a card that’s been banned in EDH as long as I’ve played EDH, but I have been playing Magic in some capacity since 1996 so it’s not like I can’t figure it out. You want to make some money? Well, all of the copies of Protean Hulk are gone, so we better look at combo pieces instead. Those are largely untouched. Let’s make some money, shall we? 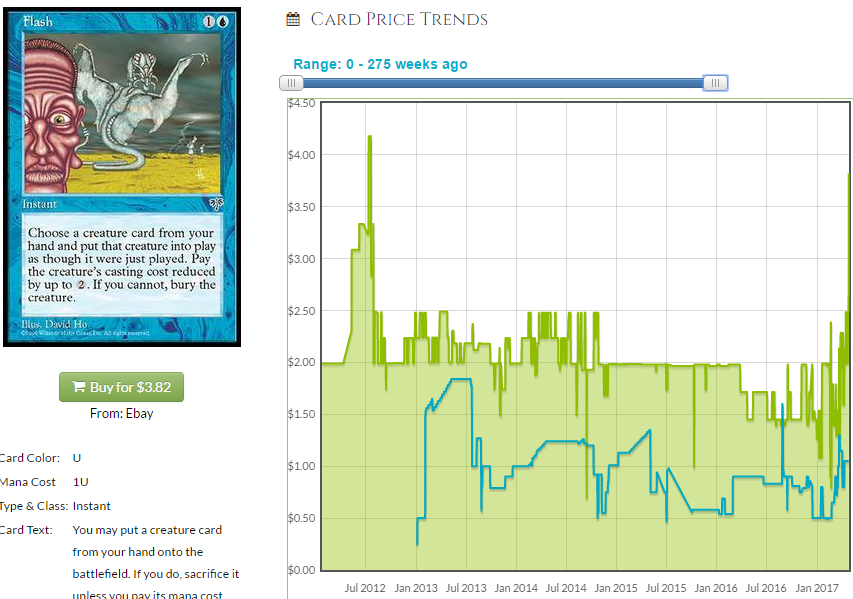 Maybe this first one is a little bit obvious, but with the bulk of the EDH decks excited about Karador builds and the like, Blue stuff gets lost in the shuffle. This is already disappearing a little bit but there are still cheap, loose copies floating around. I have a bunch in the dollar box at my LGS I need to swoop in and scoop up unless someone beats me to it. I think this has upside and with its two printings coming from extremely low-volume sets, supply is not going to keep up with demand for long. 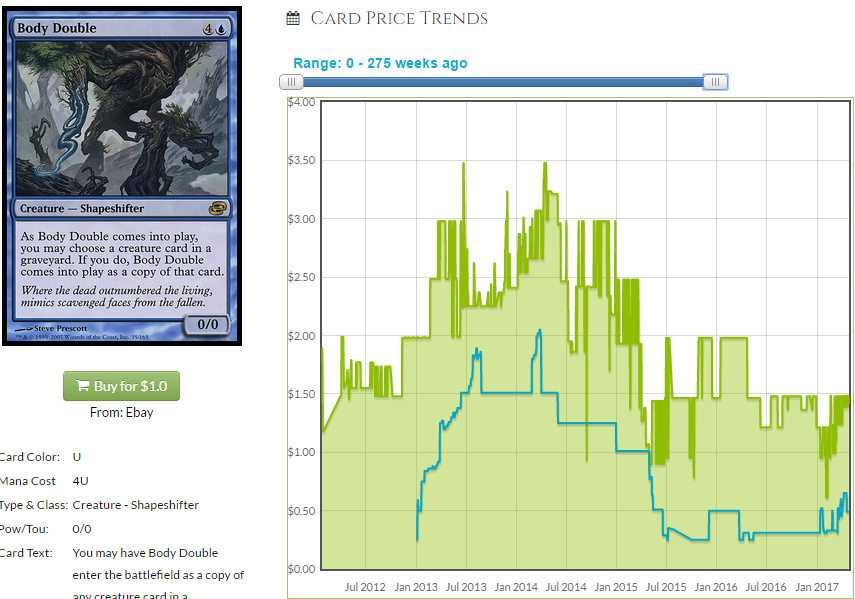 Do I sort these by color, or…

Either way, Body Double is a card that plays a big part in a lot of Hulk combos. It was used in some of the classic Hulk combo decks and it’s being touted as a combo piece now. It’s blue, like Flash, so it likely ends up playing a part in a combo deck. I doubt you can do any combos in just Simic, but The Mimeoplasm has the infrastructure to just start jamming Hulk combo without much retooling and Tasigur and Sidisi and other decks will get there, also. Body Double got a duel deck reprinting, which hurts, but so did Coalition Relic. This is a low-risk, low-to-medium-reward spec, IMO. 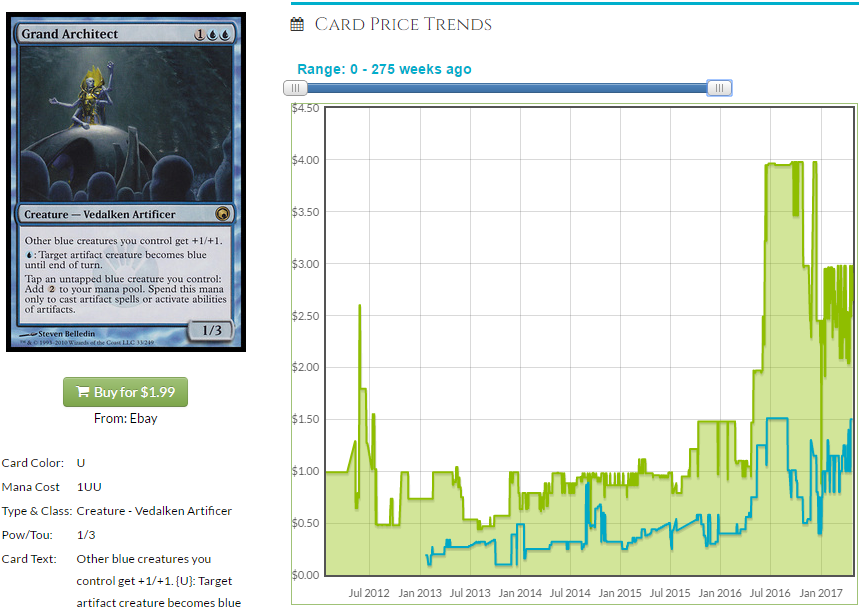 Hulk can get you the Pili-Pala, Architect combo, which can give you all of the manas. With infinite mana, you can do a lot of dirty things in Simic, Temur and Sultai or Bant. Win with Helix Pinnacle, deck yourself with Thraisos, deck everyone with Prosperity, etc. This also got a little heat when Breya came out and with that cooling off, this could be a second spike scenario and you all know how we feel about those. We’re in favor of them, that’s how. 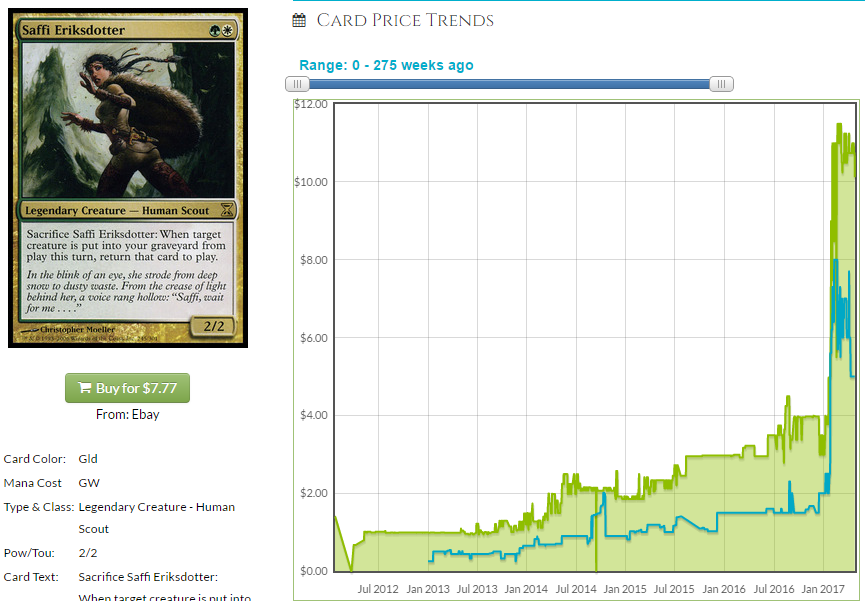 Not sure who “Erik” is but his dotter is a beast of a Magic card. Already spiking hard recently. this card is not going down anytime soon, unless it’s considered “Iconic” enough to be included in “Iconic Masters” which may turn out to be a set where they fart out a ton of cards that badly need EDH reprints, something I welcome. You know how many $6 Phyrexian Altars I’ll sell? Because I currently sell 0 because they’re too expensive. Anyway, Saffi gets played in Hulk combos a lot because she interacts with Karmic Guide, another card I have been predicting is due for a price increase for a minute. I hope you stocked up. 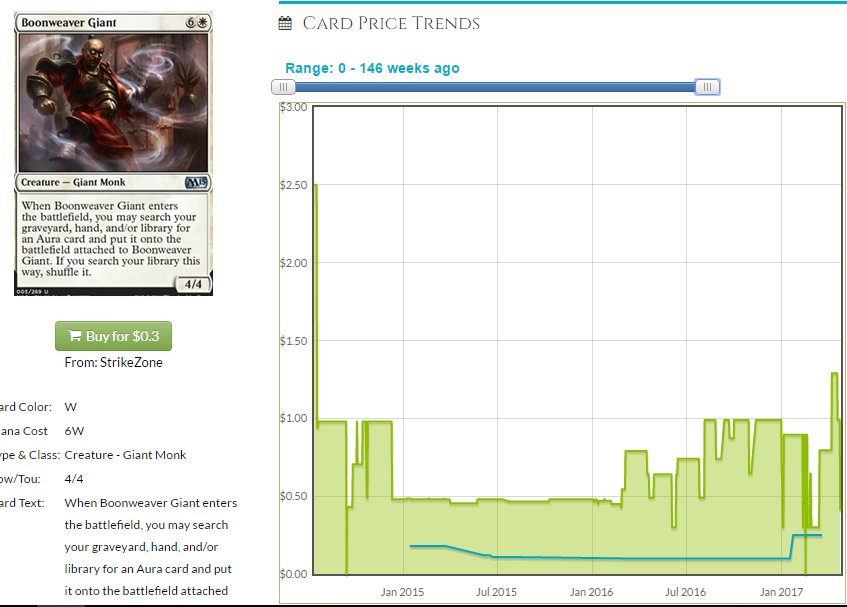 Foils of this combo piece are under $0.50. I think of this fact every time people try to convince me that competitive EDH is a major driving force behind prices. This card has upside and the foils are safer from reprinting than the non-foils, but this is an important combo piece played in a lot of “competitive” EDH decks and the foil is worth less than guac at Chipotle. I think this will get some extra attention and there aren’t a ton of copies available so renewed interest could trigger a price avalanche, so buy in before that, I guess. What do I know? I predicted competitive players would buy Dramatic Reversal enough to make that foil price go above $1 and they printed Paradox Engine 2 months later. 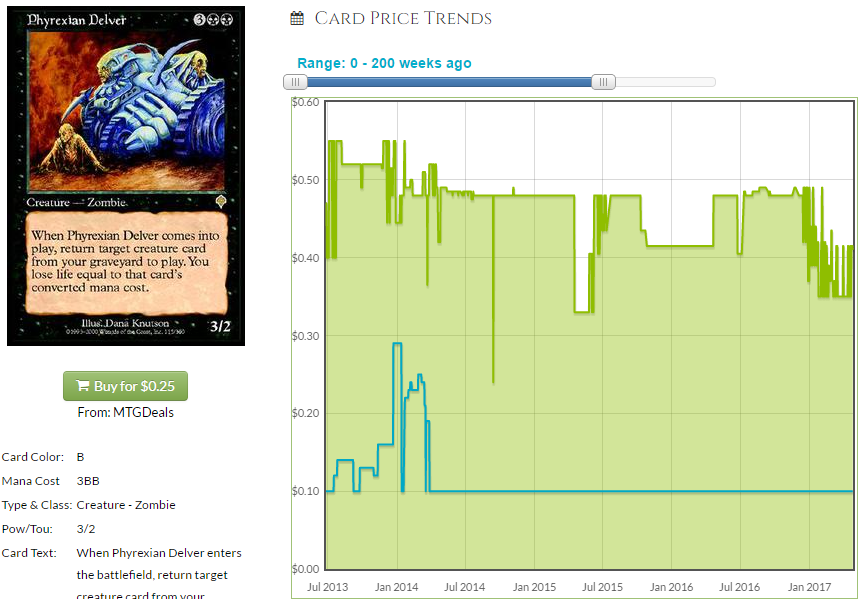 This card is part of basically every combo I see, barring the ones that don’t use black. It’s not quite Karmic Guide but it does a pretty good impression and while your life total can sometimes matter, depending on how long the game goes, you shouldn’t need to use Delver to get Hulk back more than two times no matter what the rest of the combo looks like. If you have to go Whiteless, this card is part of the combo nearly every time. I think there is very little risk here and despite the Commander deck printing, there is upside enough to move the price. You know what’s even safer than the non-foils of a card they’ve demonstrated their willingness to print? 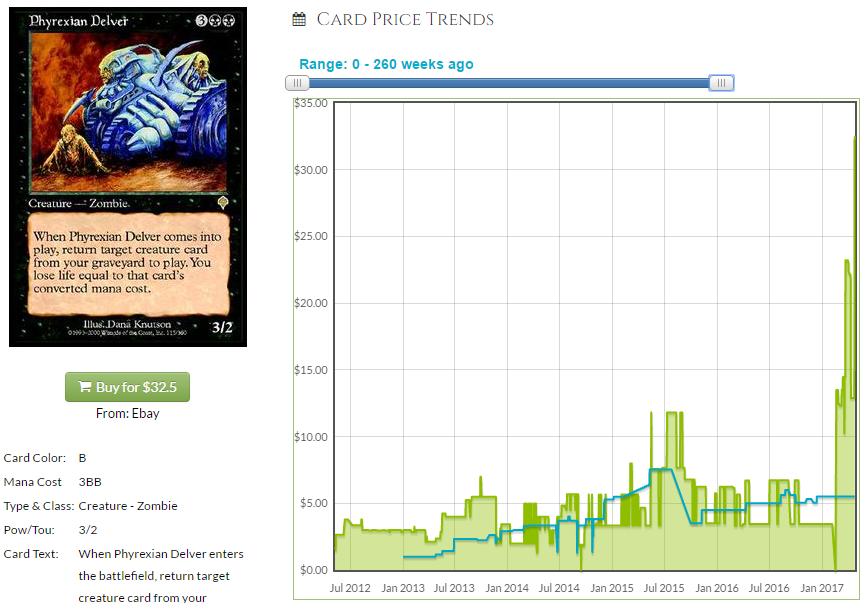 If you can find foils, they’re probably headed to $40 and beyond soon. This used to be a pretty reasonable card until, I guess, everyone started thinking about how good it was in a lot of combos and I credit Commander 2015 for reminding people the card existed. Hulk hype is driving this up a bit more, I think (I’m writing this under 24 hours after the announcement and the price has been on the move for a minute so it’s not just Hulk doing it) and this was a junk foil until pretty recently so there may be just rando copies in binders.

Feldon of the Third Path 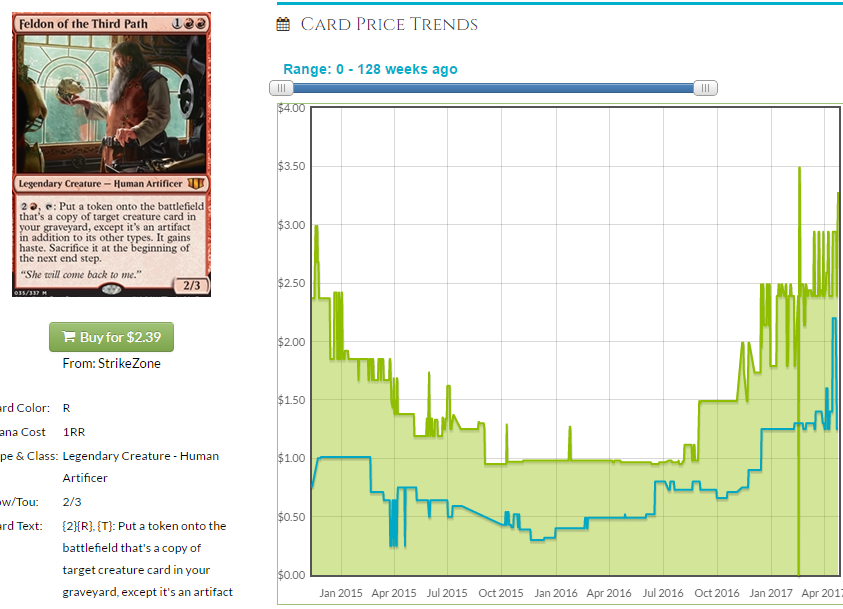 It’s been a while since I revisited this card which is a shame, because it started to move while no one was looking. The spread is pretty low on this for a card that’s inching above its historic high. I think this card is taking off, and how well it pairs with Hulk combos has something to do with it. If you have a sac outlet, especially Ashnod’s Altar, you can KO them with Hulk, Lightning Mauler, Kiki-Jiki and Zealous Conscripts. Kiki-Conscripts was a known combo already, but Feldon helps you find both pieces from your deck by making another Hulk to get the job done. This is a complicated combo that takes a lot of mana, requiring you to use cards like Priest of Urabrask and Skirk Prospector, but we’re trying to KO people and if all those cards need to do is be somewhere in your deck, you’re OK with running a lot of components as long as you can find all of them with Hulk.

Feldon is already on a good path (heh) so whether or not Hulkamania moves his price at all, it’s already a good card to be about. Buying at the floor was better, but buying right before it crosses the threshold of its historic high with a very low spread seems also fine. Breya is a deck that loves this and with WotC being fully aware that people want a UR artifact commander, we could get one any day now and then a card like this has real upside. 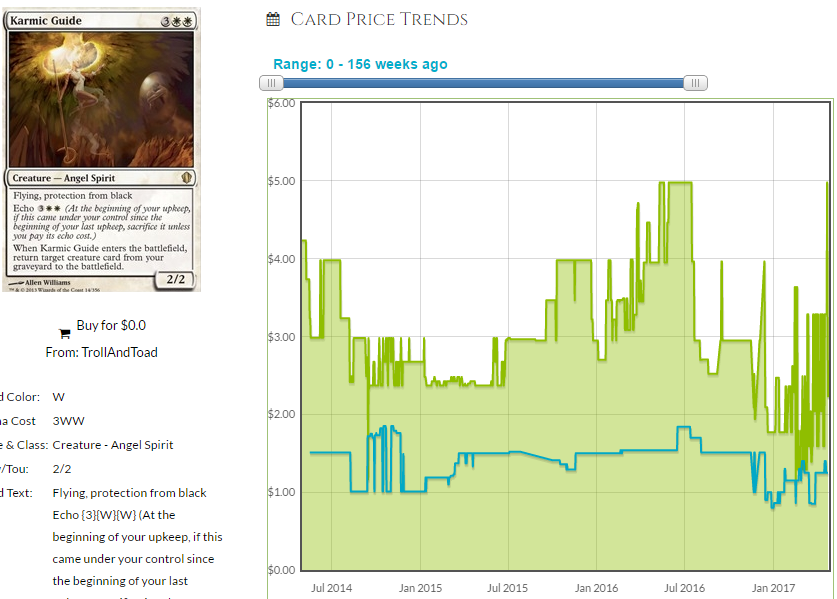 This was in Commander 2013 and I predicted it could climb in price. I was totally right. Then came Eternal Masters. I think this could climb again and maybe even flirt with $5, but Iconic Masters is coming soon.

I think Karmic Guide is not where you want to be. That said, it’s part of every single combo with Protean Hulk in decks that run White, so maybe you want to at least have them on hand.

I think Hulkamania will be pretty rad at first but as time goes by, it will taper off (much like the real Hulkamania) and Hulk decks will be just another deck. Hulk really isn’t getting us combos that are that much worse than Tooth and Nail was getting us, especially if you are not playing Hulk for 2 mana with flash. There are counterspells, removal spells, graveyard hate spells and the RC can always just re-ban Hulk if this experiment doesn’t work out. Sure, twitter and Reddit will pule and whine about how Sheldon and co. don’t know what they’re doing, but they say that literally every ban announcement anyway so those complaints are like the buzzing of insects at this point.

That does it for me. I have been doing a lot of reading about Hulk combos but if there is something I missed, throw it in a comment and we’ll talk about whether the buy-in makes sense. People bought all of the Hulks but there are plenty of targets left. Buy before everyone else and your orders won’t get cancelled. Until next week!