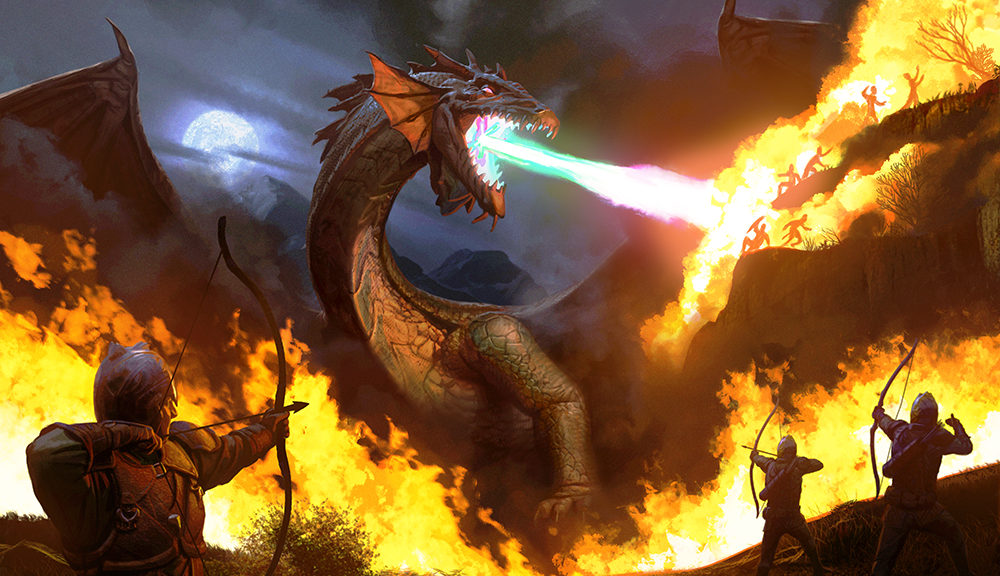 Most people are out today, soaking in the sun, drinking at parades, celebrating their newfound permission to wear white, and generally enjoying Memorial Day. Meanwhile I’m slaving away to bring you only the hottest #mtgfinance insight. It’s a tough road I walk, I tell you.

Since we last spoke, the big news was the leak of several of the cards from this year’s Commander product. We already knew it was tribal in nature, and that there were four decks, rather than five, but we didn’t know who was invited to the party. With the leaks, we know that at least we’re getting a dump of new dragons. They run the gamut in sauciness, from the less-impressive but no less appealing Wasitora, a cat dragon (???), to O-Kagachi, the oft referenced but never carded spirit dragon from Kamigawa, to the Ur-Dragon, whose scion has been a staple commander of tribal dragon decks to this point. At least two are five-color, and we’re also seeing a wedge, an ally, and an artifact, so Wizards is certainly trying to include several options to accommodate whatever direction you’d like to head.

What we don’t know yet is the other tribes. If Wizards isn’t trying we’ll get zombies, goblins, and elves. If they’re looking to give us something a little more distinct, we’ll get lesser known tribes. There’s no shortage of choices of course: cats, birds, homarids, clerics, soldiers, hounds, hydra, uncle istvans, etc. And unless more leaks hit Twitter soon, it will be awhile before we know. Speculation abound!

I’m going to cover a couple of cards in anticipation of this news. Of course, the key thing to remember is that unless it’s on the reserved list, basically every single card is a possible reprint. If you’ve been listening to MTG Fast Finance you’d know that James and I are considerably more interested in foils in the face of this, since so far, Commander product hasn’t included foils beyond the generals themselves. So long as that stays true, tribal foils are safer pickups ahead of full lists being revealed. Once the full lists are released and we know what is, and more importantly isn’t, in the product, then all bets are off.

We’ll start off with my favorite this week; Belbe’s Portal. Needing to choose a specific creature type for it to work, the obvious downside, is completely mitigated when playing it in a tribal deck. It turns into three mana, put a dude into play. What’s not to love? It’s especially potent in non-green decks, as it’s a way to cheat on mana costs, something other colors frequently struggle to accomplish.

Our biggest concern here is, as referenced earlier, reprint concerns. It’s only got a single printing in Nemesis, and would make an excellent include in the Dragon deck, which is likely the tribe with the highest average converted mana cost. Of course, even if it is reprinted, I wonder how much that will truly matter. Let’s say it’s only in one of the decks; the dragon deck. How many players are going to remove it from their dragon precon? If 98% of people that buy the dragon deck leave it in there, as they should, then only a sliver of new copies make it into the wild. Consider that three other tribal precons are hitting shelves at the same time, if only one of them really wants the Portal, then supply likely won’t keep up with demand. Meanwhile, the appearance in a single precon serves as a reminder to a great many players that don’t know it exists in the first place.

Copies are available in the $3 to $4 range at the moment, and there aren’t many out there. Less than 25 NM copies on TCGPlayer, by my count. Without a reprint this is almost guaranteed to see a pleasant surge, especially considering global supply levels, and even with one, it probably sees a bump.

(Foils would be a great play if they weren’t A. already $25 and B. sold out almost everywhere. If you can find NM copies for less than $20, go for it.)

Every set, Wizards slips a few cards in that may as well be banned in Standard, and nobody would ever notice, because they’re so obviously not for that format. Zendikar Resurgent is one of those cards.

Resurgent does everything EDH players want to do. It makes a bunch of mana every turn, and it draws you a bunch of cards. Seriously, green is such a stupid color in this format. Legacy and Vintage belong to blue. Commander belongs to green. Modern belongs to…is it black? You get Thoughtseize and Liliana of the Veil. I guess maybe white? I suppose my point here is red is just a garbage color all around.

As an Oath of the Gatewatch rare, supply on Resurgent is quite high at the moment. There are pages and pages of the non-foil copies, with a total volume of probably several hundred on TCGPlayer right this moment alone. One day this may turn out to be another Parallel Lives, and those that invested at $.75 would make a killing when it finally climbed to $6 or $7, but that is a loooot of bullets to dodge before it gets there. Someone could possibly make money speccing on this guy, but for each person that does, ten other people specced on a recent rare and then saw it reprinted three times in a single year.

Scanning the tribal pages on EDHREC, you’ll find Resurgent as a top enchantment in basically any deck that makes green mana. Tribal decks play lots of creatures, so they’re well able to make use of the second half of this card. Of course, it’s good in non-tribal decks too, so while this fall’s release will bump demand, there’s already plenty as is.

For Zendikar Resurgent foils are where it’s at. Copies are around or near $4 on TCG, and most major retailers are either sold out or listed noticeably higher. Every single dragon deck will love to have this available, and really, any deck looking to, uh, play Magic really would like copies. We could easily see foils in the $10+ range by the end of this year.

Our first two cards to keep an eye on this week were related to the new Commander 2017 product coming later this year. Our last card for the week is a Modern pickup for a combo deck that, while it was hardly needed, has gotten some new life.

Duskwatch Recruiter has been useful in the Abzan Company decks for awhile now in sparse numbers. With the recent printing of Vizier of Remedies though, the utility of the little werewolf that could has skyrocketed. Vizier of Remedies and Devoted Druid has rapidly become a mainstay of the Abzan Company deck, essentially remaking it in their image, and the two work in tandem to generate infinite mana. The difference between infinite mana and four mana when it comes to Collected Company is zero, so it doesn’t really help all that much there, aside from maybe casting it early. It’s better applied to Chord of Calling, but that still only gets you a single creature, and you don’t get the cast trigger either, so getting Emrakul, the Aeons Torn doesn’t do you much good. But – BUT – combine that infinite mana with Duskwatch Recruiter and you can now draw every single creature in your deck. So long as there’s a Walking Ballista in there, your opponent is dead on the spot. And of course, even when you don’t have infinite mana, he’s still a useful guy to have around when your deck has lots of small guys, many of which generate mana.

Roughly an infinity of non-foil Duskwatch Recruiters available. Foils, however, are in surprisingly short supply. TCG has maybe 30 copies at most, SCG is sold out, and most other vendors have zero to few available. Foil uncommon Modern staples have a way of sneaking up in price, and with Recruiter a solid component of the Druid/Vizier combo, I imagine he’ll follow the trend.