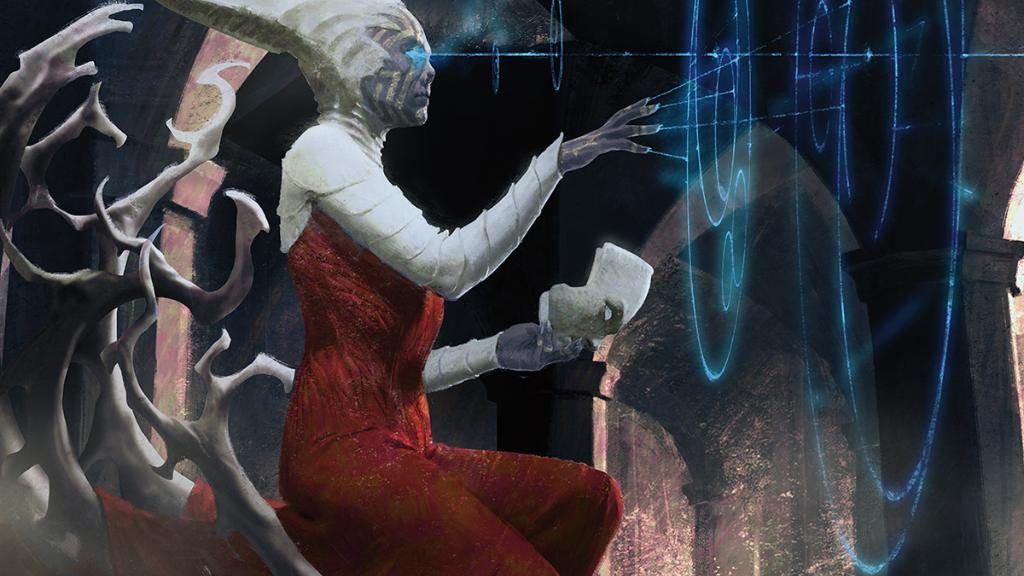 Commander 2018 previews have wrapped up, and the general consensus is that while there’s some true gems, overall it’s a slightly less exciting release than it’s been in the past. Primarily there’s a sentiment that while the MSRP has been raised $5, the value in the box is less than in the past. You’ll find fewer high dollar reprints than you used to. That doesn’t make it a bad product, of course, but Reddit needs to be angry about something.

While the value in the box isn’t setting a watermark, it has a less tangible value, and that’s that the themes presented are less explored in Magic’s history. Opening up space to work in means you aren’t just pulling out your same list of 50 EDH staples for those colors and tossing 10 unique cards in; if you try, you can get a good 30 or 40 unique cards in the lists. Most of those are also going to be dirt cheap, since demand on them has been low up to this point.

I’m focusing on Varina, Lich Queen a lot this week, because she could very well end up being the sleeper commander of the product. Varina is a zombie deck in Esper colors, something we haven’t had before. Sure, people have played Ertai, the Corrupted or Oloro, Ageless Ascetic as a Zombie deck before, but that’s not a zombie deck. Furthermore, not only is Varina our first true Esper zombie commander, she’s actually good. Attack with zombies, get cards and life. She’s not clever, but she’s useful, and that’s great.

Zombies are just about the most popular EDH tribe that exists, and I’m actually sort of shocked that foil Rooftop Storm is still only $6. The time for this to be $15 or $20 has long since passed, making this a real freebie this week.

With only a single printing in Innistrad, Rooftop Storm is approaching “there are EDH players that weren’t born yet when this was printed” territory. We’ve got no reason to think it’s coming back anytime soon, and those foils are especially going to be less and less common. I can’t see how these aren’t approaching $20 in the real near future.

Varina bringing white to the table for zombie builds is exciting because it opens up a suite of cards to the most popular tribe in the format. For example, do you see many Varina lists existing without Anointed Procession? (I wanted to make that a pick this week, and while I do see it trending upwards over time, it’s going to be a slow ramp.) Amonkhet brought about white zombie cards, but there wasn’t really a place to play them yet. Now, they’ve got a true home in the 99 format.

One card that would be phenomenal in my Sidisi deck is Necromancer’s Covenant. This does a bunch of things at once. 1. Exiles every creature in someone’s graveyard. Eat it, Meren. 2. Makes a boat load of zombie tokens. 3. Gives them all lifelink, so you aren’t just completely dead on the crack back. If you can find a way to bounce it, even better. (It’s possible this card should be in Aminatou, actually.) Overall, just great stuff.

Having white in the casting cost has historically made Covenant nearly unplayable, simply because there weren’t many BWx strategies that would have wanted to devote a slot to it. Varina is a huge avenue for this to make a splash in the format. Add in that it’s a single printed card from Alara, and you can see how the foils are ripe for profit.

One of the less-celebrated new commanders is Tawnos, Urza’s Apprentice. Let’s be honest: this guy’s a jerk. His whole shtick is copying stuff that’s already going to be broken and annoying. I looked at a couple of sample lists, and it was thirty mana rocks, Paradox Engine, and Planar Bridge. Who wants to play with that guy?

Even if he’s a snot, people are going to build the deck, and they’re going to need cards for it. One of those cards is undoubtedly going to be Staff of Domination. That card is rarely fair, and for that reason, it’s going to be popular. In fact, it was on the EDH ban list for three years. (Kind of a short prison sentence, but whatever.) I’m sure there are infinite combos in there with Tawnos and the untapping ability. Doubly so with his namesake Candelabra.

Of course I’m talking about the Inventions copy, not the the pack copies. People sitting down to build Tawnos are going to take a long hard look at the Inventions copies, decide that it’s worth plunking down the extra $50, and picking one of those up instead. After all, the Inventions overall feel so safe, everyone’s heard about the prices going nutty, and you’re guaranteed to find a use for the card even after you pull apart Tawnos in a few weeks after your friends refuse to play with him again.

Given that the price gap between pack copies and Inventions is a lowly 2x multiplier, there’s certainly vertical room on Staff of Domination. A price tag well north of $100 is an easy threshold to hit, as it’s a well known component of the format, and the Inventions copy is going to be the only good foil with the original art, ever.