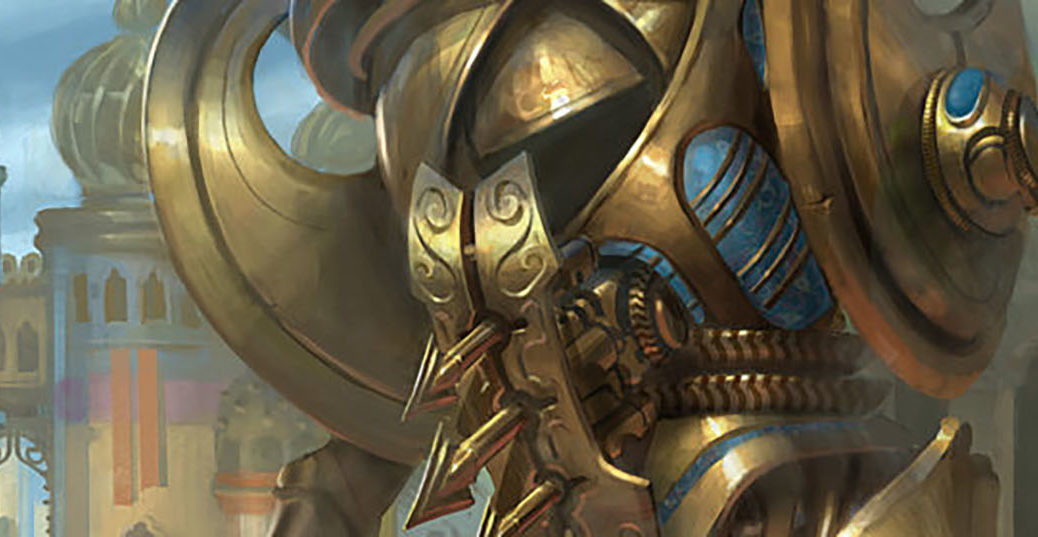 With September in full swing, we’re now just a few weeks away from the annual Standard rotation and the resulting shake up in card values that typically accompanies it.

This time around we’re facing the rotation of both the Kaladesh and Amonkhet blocks, both of which are notable for containing Masterpiece cards and a plethora of casual and EDH staples. Kaladesh in particular, as an artifact themed block laden with open ended synergies, seems destined for spec greatness.

A while back I proposed a framework for evaluating Magic specs based on their fundamental attributes, as described in detail over here in my article on Spec Scores. And while I (still) haven’t gotten around to fleshing out that concept in the form of a forthcoming web tool on this site, we can still borrow some core concepts to make sure we’re setting priorities rationally when reviewing the upcoming rotation.

According to my Spec Score framework, we want to consider the following when choosing our top picks at any given moment:

In quick summary, your best bets are often going to be found among mythics that are near a tipping point and are played in high demand in multiple formats, offer a unique effect, are easy to cast, and are hard to reprint or still years from their first reprint.

With that in mind, let’s dive in and try to find some tasty targets in the Kaladesh and Amonkhet blocks!

You’re going to have trouble finding a card more likely to make you money from the Kaladesh block past rotation than Walking Ballista. According to MTGGoldfish.com, this ubiquitous XX construct is now one of the top five most played creatures in Modern and it’s in the Top 20 for most played cards overall. Between Tron variants, Hardened Scales Affinity, Amulet Titan, Counters Company and B/R Vengevine usage it’s pretty clear that Ballista is likely to maintain a presence regardless of which way the metagame rolls. This dangerous war machine also shows up as a powerhouse role player in Legacy (Eldrazi Stompy, Death & Taxes) and Vintage (Shops).  The card has also been reported in 5500 decks on EDHREC.com, so we’re talking a true multi format all-star here.

Based on all of that the question isn’t whether Walking Ballista will rise before it’s next reprint but whether we’re going to get a better entry point in six weeks than we have right now around $12. Personally, given how medium-low the inventory is at present (especially for a rotating Standard rare), I favor dollar cost averaging on this card over the next twelve weeks, opportunistically grabbing a few play sets every time a juicy Ebay or TCGPlayer coupon comes up.  I grabbed 12 near $10 last night, and I’ll be aiming to acquire 40-50 before Xmas with an eye to unloading via a future buylist order.

By the by, foils are already significantly more scarce than non-foils here and snapping a few up near $35 on the assumption that they’ll top $60 by 2020 seems like an easy bet.

Baral, Chief of Compliance doesn’t even make the cut for the Top 50 most played creatures in Modern, largely because the only deck he ever shows up in is UR Storm. He is however a semi-permanent fixture of that archetype however, and typically played as a 4-of. Over in EDH, while not a popular commander per se, he does show up in 5000+ decks on EDHREC. Overall, I’m mostly interested in foils, though I liked those even better closer to $8. Snap off a couple of play sets for your spec box here, and a steep ramp will likely get you to $20+ in due time.

In terms of land cycles, the Kaladesh check lands are the most likely to do well for us on a longer horizon. Spirebluff Canal is only barely in the Top 30 lands in Modern, but it also shows up in a fair number of EDH decks so it’s still likely to show some healthy appreciation down the road. Given how many land cycles are backed up for reprint I also feel fairly confident we don’t see these again for at least three or four years.

There’s a lot more of any given fall set rare than any given small set rare, so I would tend to favor the foils here over the non-foils, especially given that Spirebluff Canal foils are already in relatively low supply. Picking these up under $15 and aiming for $30+ seems a good bet.

Side note: Blooming Marsh is also a decent, if lesser, target here, so if it fits better in your collection, consider those foils under $10 as rotation dumping picks up.

I already got in on the foils of this quiet all-star at $6, but I’m not scared to scoop some more up closer to $15 this fall because I think it’s obvious we’re going to see them hit $30 long before a reprint. Ironworks Combo and Bridge both run a pair of these in Modern, as do a few other decks. More importantly, this is the 2nd most played card in all of Kaladesh, with nearly 15,000 registered uses on EDHREC.com. Feel free to add 20 or so non-foils to your spec box if you can get them closer to $2 than $3, since buylists are already close to $2 and your risk is minimal.

The question isn’t whether Panharmonicon is going to see constant demand from Commander players. The question is whether you still want in given that you’ve missed your best entry point. As the top card for the format from Kaladesh, this card is currently double its peak supply low of $2.50, and foils have also already more than doubled up from their low as well. $20 foil rares that are about to rotate are not automatic wins, but in this case I think that if you’re late you just tip your hat to those of us that spotted this card early and go ahead and jump in. It doesn’t hurt that Saffron Olive just ran an entire theme week for this card on his stream, and that won’t be the last time the card gets a boost from casual coverage or memes. To sell by the single copy focus on foils, and you’ll get to exit over $30 within the year. For non-foils the profitable hold might be closer to 18-24 months, but you will almost certainly get to exit en masse to a buylist.

Aetherflux Reservoir is the very definition of a card that most Spikes would ignore at first glance, while the casual scene posts up for a long term love affair. The effect is very unique, specific to the Kaladesh setting and unlikely to be a reprint priority for years. Reservoir was actually a key build around in a Standard deck less than a year ago, but up until May of 2018 it was still under a $1. Fast forward through the typically slow summer months and Reservoir is heading into rotation season with a surprising amount of momentum. The card can already be outed to buylists for $1.50 ($2 credit) and retail is steady around $3. Given that the Reservoirs’ online inventory is relatively modest for a rotating fall set rare, and given that it has been reported in 11,500 decks or so on EDHREC.com (ranking as the 3rd most important card in Kaladesh for EDH purposes) I’d say odds are good that the non-foils will hit $10 long before a reprint shows up. Foils can be found under $10 right now, but the ramp to $20-30 is well defined, and because a reprint is most likely to eventually show up via a fall Commander set release, foils are even more insulated.  Down the road, my best guess is that you will be looking to out non-foils via buylist en masse, and singular foils via the sales platform of your choice.

As a three mana counter spell with no alternate casting cost, Disallow is unlikely to ever make waves in Modern, Legacy or Vintage. In Commander however, it is one of the most useful counterspells ever printed, due to the flexibility of being able to counter activated and triggered abilities. EDHREC.com has Disallow pegged as the most popular card in the format from Aether Revolt, with over 12,500 decks registered using the card there. Inventory levels for non-foils are quite high, so I don’t have high hopes for that option, but I’m definitely down to pick up some foils near $7 with a plan to out them in under 24 months for $15+.

The first time I saw this card I was a little stunned it had been printed. While a 5 mana artifact seemed fairly unlikely to make waves in Modern, Legacy or Vintage, in the slower battlefields of EDH, this shone out as a very likely open ended combo piece. Fast forward eighteen months and Paradox Engine is the 2nd most important Commander card from Aether Revolt with only slightly less decks registered than Disallow. Most importantly, as a mythic its inventory is likely to drain much faster and as a colorless card, the number of combos it will fit into as time goes on is likely to continue growing. At present the foil multiplier is only 67% or so, and foils are already showing a scarcity driven ramp up toward $50, so I like those to double long before a reprint. Non-foils are also a solid option, and you may want to also consider snapping up a Masterpiece version close to $100, which seems very likely to beat $150 no matter when an eventual reprint hits (I’d guess 3-5 years away minimum).

As the white version of Parallel Lives, Anointed Procession is a near lock to appreciate over time. This is definitely an EDH/casual only card now that’s its time in Standard is over, but in kitchen table magic I would expect demand to be pretty steady for the next 3-5 years before a reprint shows up, likely in sync with the launch of a “tokens matter” style commander in a fall EDH release. Non-foil supply is pretty deep, so I like targeting foils as a double up within 18 months that could end up appreciating in half that time if the ramp heats up.

So there you have it, my priority pick-ups for fall rotation 2018. Hollar in the comments if you have a pet spec you think should have made the list or a good reason to ignore one of my picks.

Until next time, have a great time making and saving money playing our favorite game, Magic: The Gathering!