I’m sorry for the lack of an article earlier in the week. By way of apology to Pro Traders, I’ll have some exclusive picks for you in next week’s article. We have a policy of a pretty soft paywall on this site but that doesn’t apply to cases where I drop the ball. If you’re not a Pro Trader, thanks for reading and consider buying what is easily the cheapest paywall subscription on any website. You’ll make your money back  for the year the first time a spec hits. Onward to what I wanted to discuss today.

Guilds of Ravnica is having a sort of slow time getting going compared to the excitement people experienced with Commander 2018. That’s to be expected – Guilds of Ravnica is not exactly optimized for EDH and cards like Tajic really drive that point home. However, there are a few unique commanders like Lazav that are driving prices already (although we could argue Necrotic Ooze popped because of the free article on SCG rather than Lazav decks, but I guess we’ll never know until Phyrexian Devourer either pops or doesn’t) but for the most part, we’re not finding a ton of data. What I am seeing isn’t super encouraging.

We have 4 GRN commanders in the top commanders for the week, which is not great. Worse, only one of them is really all that new and unique. Niv-Mizzet is being basically built the exact same way as every other Niv-Mizzet because he has 0 new abilities, Izoni is basically Slimefoot with different creature types and Emmara is a bad Rhys. Lazav is doing novel things but we already covered what I expect to pop based on that deck. I don’t think it’s worth taking another look at it this week but this did make me wonder – how likely are non-mythics to recover from recent reprints if they get more play based on events that happen after their printing? Is there a way we can target cards in Masters sets and commander precons better knowing what’s likely to recover and what’s not? Do we pick differently based on what shakes off a printing in under a year (Eternal Witness) and what takes two or more (Oblivion Stone)?

It’s unlikely that someone who has built a Niv-Mizzet, the Firemind deck is going to run back out and buy the 97 or more cards that will be identical when you build a Niv-Mizzet, Parun deck, but someone who has built and loves Rhys might be inclined to build an Emmara deck because the decks, while one seems to be more effective, play a bit differently. Emmara is focused on using the cheap, easy-to-recast commander to generate advantage and use spells to modify the tokens whereas Rhys uses spells to make the tokens and his ability to modify them. Cards like Parallel Lives overlap and cards like Umbral Mantle do not.

So what that was reprinted in the last year and I looking at based on its inclusion in one of these 4 decks? 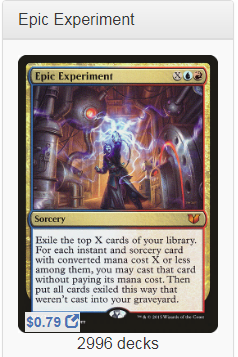 I want to use this card as my baseline. I think being a Mythic in a recentish set (last Ravnica which everyone says was too recent but was 6 years ago this week) is like being a rare in an older set and getting a commander precon printing is worse than getting a masters set reprinting. I don’t expect Epic Experiment to recover. I think under 3K decks is probably too few, I think it’s not even that great in Niv-Mizzet, Parun decks but a third of the people who just built it disagree with me there (though two thirds agree) and I think it’s not useful in enough different kinds of decks to go up. I’ll be saying whether every pick I come across is more or less likely than Epic Experiment to go up. If you agree, then maybe the pick is a good one. 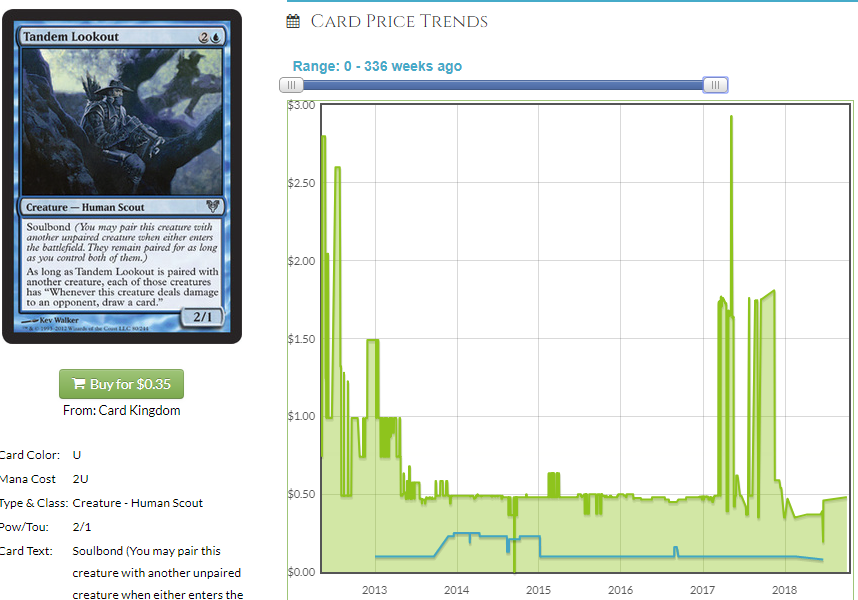 Tandem Lookout is a card with very little demand (around 1,000 decks, almost all of them Niv-Mizzet) but foils are basically the same price as non-foils. The farther we get from Modern Masters 2017, the more likely it is to flirt with that $2 mark again. I think this is a “roughly as likely as Epic Experiment to recover” but you can get these in bulk foils and I recommend setting them aside.  These may be the same price as the non-foil now, but I expect that to change. It’s too perfect with Niv-Mizzet and apparently they love to reprint cards with that same ability in Izzet. 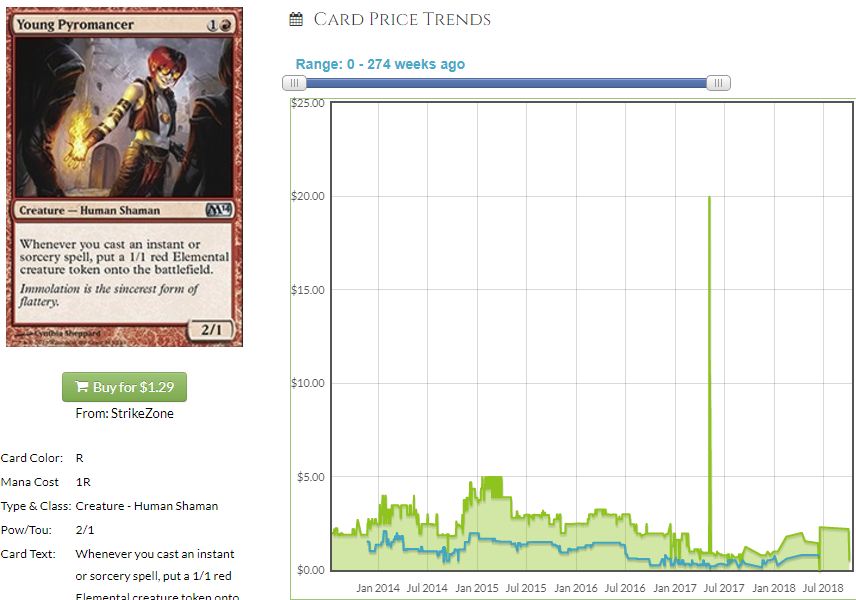 Up from $0.50 to its current $2, this has recovered from Eternal Masters quite nicely. The foils took a bit of a hit as well. 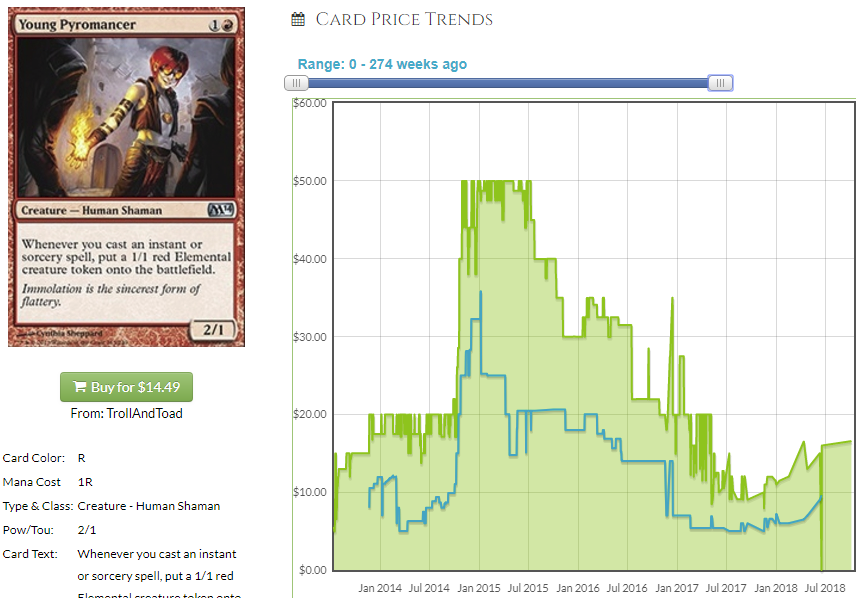 I think this is a good example of a card that can shrug off a reprinting in foil eventually as well and Modern and Vintage play makes the foils more attractive than does EDH. However, the foil is beginning to recover and though any time this is reprinted, it will likely be in a set that has foil options also, this is still bound to follow the non-foil and recover. It’s sub-$20 but has shown the capacity to flirt with $50. I think this will be $25-$30 pretty soon and the non-foil will be $3 to $4. EDH isn’t doing this on its own, but it’s helping. 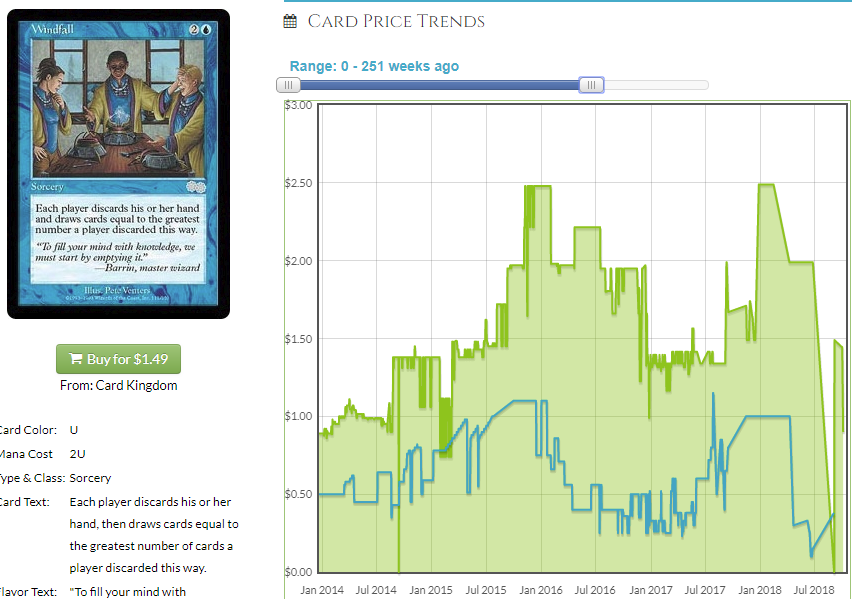 Way more useful than Niv-Mizzet-specific cards is one that I found in Lazav lists as well. This shrugs off reprints all the time but never really gets above $2.50, either. I think the real play here is the foil copies. 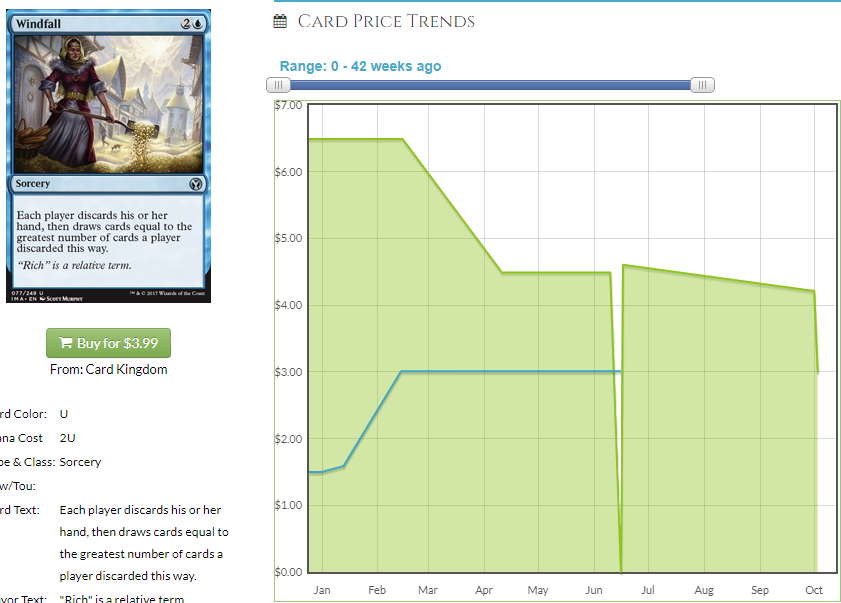 While the non-foil is likely to get a breather to recover in price for a year or so in which time I expect it to crest $3, the foil is currently $4 despite only having been printed in foil once. I think this can slowly climb given how good the non-foil has been at maintaining a relatively even keel in the face of a pile of reprints and if this is $10 in a year, I won’t be that surprised. It could just as easily not be $10, but it’s in 18,000 decks and because of its inclusion in Commander sets and Battle Royale, it was only printed once in a set where its rarity mattered. I like both the foil and non-foil of Windfall and the fact that it showed up in Niv-Mizzet AND Lazav decks when I checked today makes me doubly confident. This foil can’t remain a dollar more than the non-foil when it’s in booster packs that cost $7. 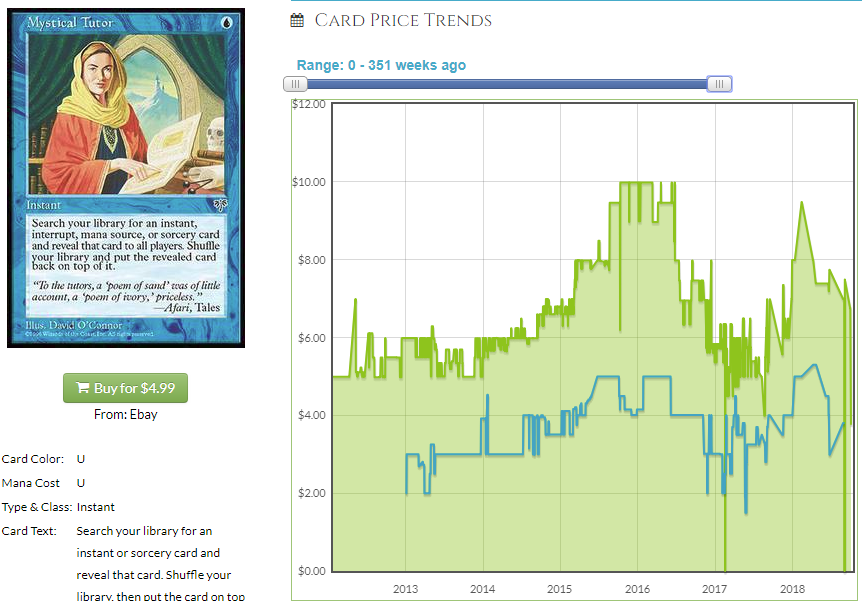 This tanked to nearly $4 and is recovering but it’s not done. I think the new art kind of sucks so I am targeting Mirage copies but at 33,000 deck inclusions, it’s clear players aren’t picky, they just want copies. This likely crests $10 if it’s not printed again soon and despite not being legal in Legacy anymore, this is a real iconic card, it’s an EDH staple in Blue decks and it has almost recovered 100% in the last year and isn’t done. Next time they do a Master’s Set, I’ll do another list of cards likely to recover well – I checked back in on the cards I mentioned last time I did that like Rune-scarred Demon and Austere Command and they are doing very well. This seems like a no-brainer even if we’re not buying at the floor. 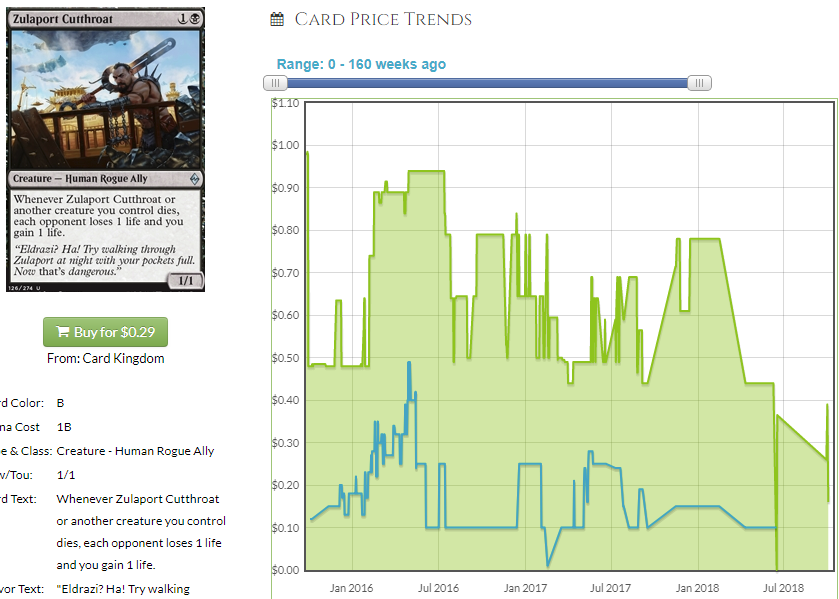 12,000 deck inclusions and some real synergy with Izoni make me think this is bound to pop back up, soon. Being printed at uncommon in Masters 25 isn’t ideal, but it’s also like an $8 booster pack and the card is relatively recent anyway. I bet this is $2 eventually – especially given that Blood Artist was in Eternal Masters AND C17 and is already over $2 itself. If you only play one, you probably play Artist over Cutthroat, but why in the world wouldn’t you play both? 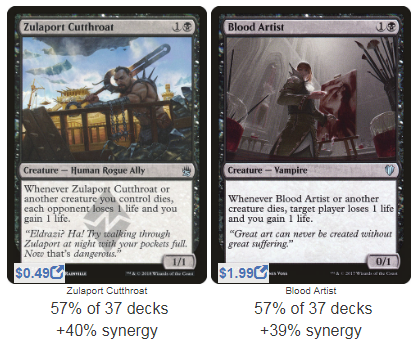 You do play both.

There’s nothing really applicable in the Emmara deck, but I do have a few notes. 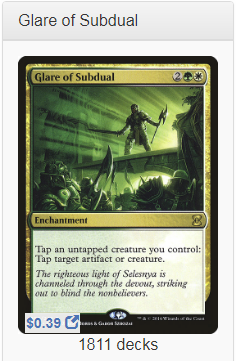 This is in the Guild Kit with the same art, meaning the Eternal Masters price drubbing has been made even worse. This will likely never recover. I don’t think its modest demand, limited mostly to Emmara decks coming out soon, is enough to make me want the foils, either. Don’t sleep on the Guild kits, folks. They have foil commanders with new art, really sexy basic lands and it has quite a few rares for its price point. 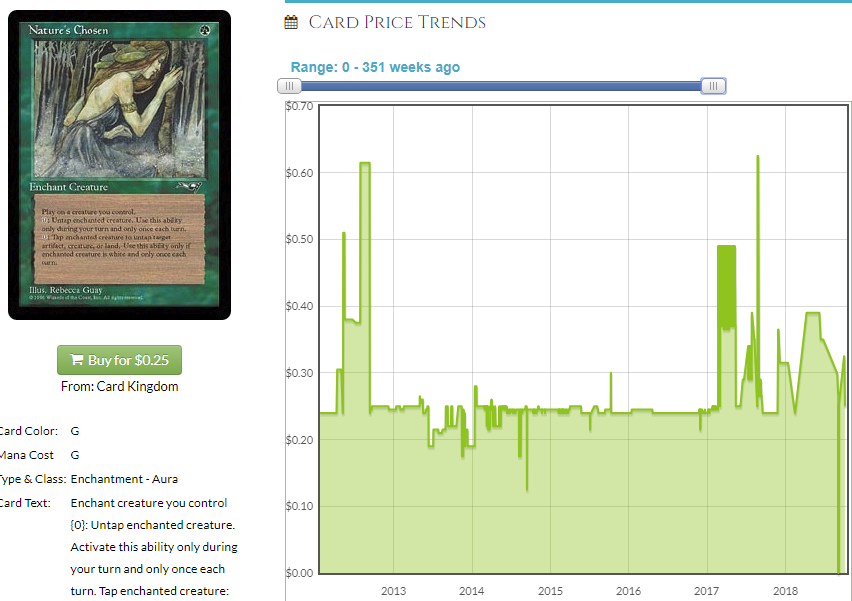 No one really has this in stock and I think a quick run on it the few places it’s listed can create a spike you can sell into.  I’m not advocating creating the spike but I think you might want to be equipped with some of these. They are pretty specific to this one deck but they are also rare as can be given they were printed in 1996. I am planning to buy every copy on Card Shark in a few days – it’s already selling out everywhere else.

That’s all for me. I apologize for the late article. I’ll get the Pro Traders back next week with some exclusive picks. Until next time!