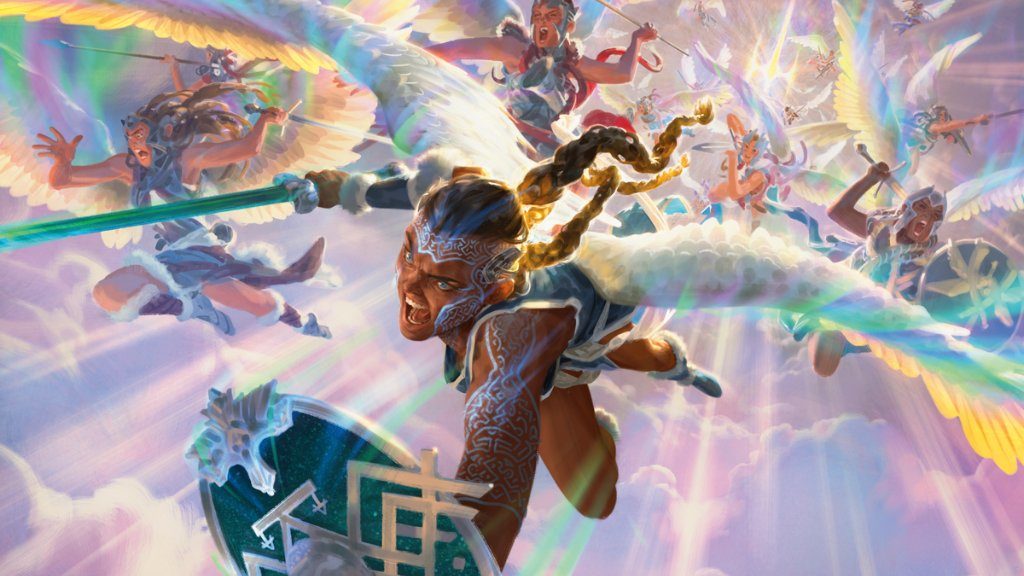 So the set is out on Arena and MTGO, and won’t be available on paper for another week. If you preordered, it’ll ship out on February 5, when the set is officially released in paper. We’ve still got a little time for prices to go nuts, but we’ve also got some preliminary data on what’s selling and what isn’t. Let’s take a look, shall we?

Reflections of Littjara (Currently $3) – First of all, this is available as an alt-art foil promo for those who purchase the Kaldheim bundle. I am very likely to take a stab at picking up a lot of those versions, as well as some number of regulars and FEA versions. This is an excellent payoff for tribal decks of just about any flavor, and the only problem here is that Legendary creatures are not always great to make copies of, depending on the enters-the-battlefield effects. This has trended down from a high of about $5 so far, and I completely expect it to approach bulk status. It’s not going to do much in Standard, and buying large amounts of awesome Commander cards is exactly where I want to be.

Cosmos Elixir ($4) – What’s notable about this is that it isn’t legendary. If you wanted to build a control deck and put three copies into play, you’d get three triggers. Lifegain is a popular theme in Commander games, and this does what you want, giving you the lifegain trigger or a card. I expect this to be an easy slot into whatever the next good lifegain Commander is, as Oloro is a bit too old to gain attention this way, even though it’s on The List. To be clear, I’m not buying these until they come way down in price.

The World Tree ($12) – It takes a lot to have a rare land hold a price higher than a booster pack. It’s got to have enormous appeal across several formats, and while I love what this offers to five-color Commander players, that’s pretty much it in terms of the potential market. The activated ability means that you can’t add this as free fixing in anything less than fully prismatic decks. As a counterpoint, EDHREC has more than 30,000 five-color decks in its database, and this is remarkably easy to slot into such a deck and feel pretty good. Still, this won’t hold $12 and will be lucky to hold $5.

Esika, God of the Tree ($14) – Another card that’s five colors or bust, the attention is mostly on the flip side, The Prismatic Bridge. Every turn you get the first creature or planeswalker out of your deck, but the extras are sent to the bottom. No Polymorph-style tricks here. This is a mythic, so the price will stay higher for longer. I’m hoping that it gets down to the $5 range as no one plays it outside Commander, but being the new awesome card will probably mean $10 is a more realistic price point.

Mystic Reflection ($13) – There is a graph via Frank Karsten that shows the interaction between this card and Master of Waves. Do keep in mind that this reflects the total power on the field, not the number of creatures.

Kooky stuff, and yes, it combos very well with a range of token makers, but the memes are not enough to keep the price this high. It’s possible to use this offensively, to turn their cool thing into some lame thing that’s already on the field, but really, wouldn’t you rather have a counterspell or an Ixidron to deal with that problem? This is going to drop like a rock, and if I could short sell a card this is the prime candidate. I have trouble imagining that it’ll hold a price above $3.

Koma, Cosmos Serpent ($8) – Again, this is a mythic so it’s got that many less copies out there, but this is a card that MIGHT be a singleton as a finisher in some Simic deck and that’s about it. There’s not a huge amount of Serpent synergies to exploit, whereas if this was a Hydra it would at least have those decks going. This is going crash hard, being bulk or nearly so in a couple of months.

Tibalt’s Trickery ($7) – Another meme card, but one with potential and it’s showing up with Violent Outburst and Emrakul, the Aeons Torn to work together and get the spaghetti monster on the field on turn 3. Basically, cast the cascade spell, and the only hit is a single Trickery. Then the Trickery starts flipping cards, and the only legal hit is Emrakul. It’s a glass cannon, but so are the new versions of Oops! All Spells and Charbelcher, so let’s not go throwing too many stones. If people want to play instant-win combos in Modern that require aggressive mulliganing and folds to hand disruption or a Censor. This will also be bulk status in a few weeks.

In Search of Greatness ($6) – This is a bad version of cards we already have. Hibernation’s End is the most reliable of these, as you pay the upkeep cost and then get something that size, no matter what you have in play. ISoG requires you to have something on the board, and then have something else exactly one mana more. The fail-case plan of scry 1 is a pretty lame gift, but at least we have that going. This can only ever cheat you ahead to something that you would have been able to play if you had drawn another land, and for this to be good, you’re going to need quite a string of fortunate events. Bulk rare incoming.

Alrund’s Epiphany ($3) – Finally, a card I’m planning to stock up on. Extra turns cards are generally very good, and some decks want to play every single one they can. Part the Waterveil comes with a 6/6 if you get it going, and two 1/1s is also nice for speeding up the process. This has alternate art as a Showcase, and when this is cheap (and it’s going to be quite cheap) I’ll be happy to pick up a couple playsets for very little down.