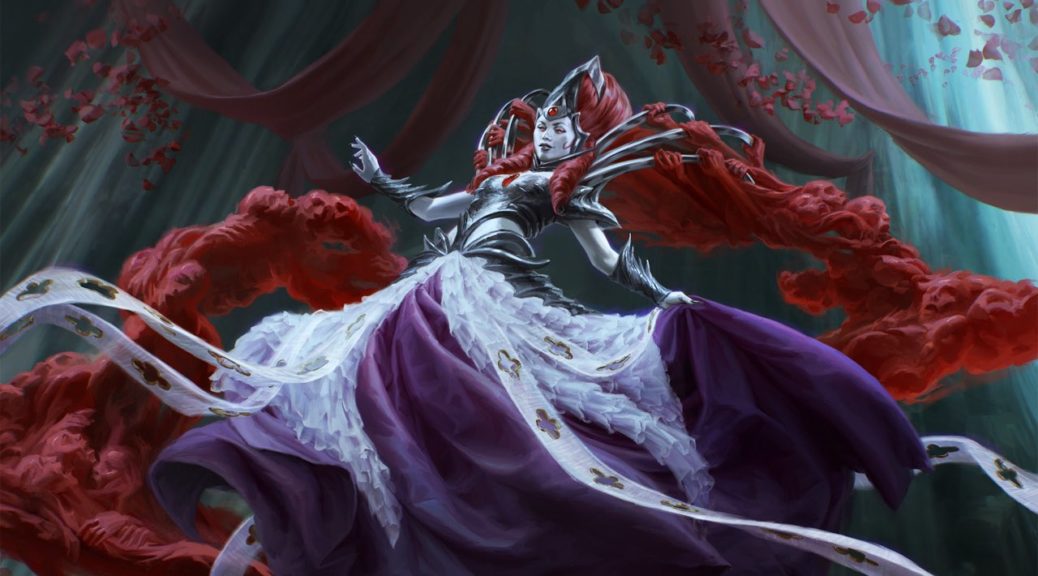 I don’t think I’ve written specifically about Innistrad: Crimson Vow in relation to EDH since the set was first released, around four months ago. I think it’s time to go back and see how the set has done since then, and which cards might yet have a bright future ahead of them.

Aside from being the most popular commander from the set, Toxrill has proven to be a solid card in its own right as well – 2200 as a commander and 4200 as a card. I think that it would be far more popular than that even if not for one tiny little blue mana symbol in the textbox, which is holding it back from being in all those mono-black and black/X decks that don’t include blue.

A 7/7 for 7 certainly isn’t the best rate going when it comes to pure stats, but that’s not what this card is about. The first line of text is the most important here, because it says at the beginning of each end step – that means four times for each go around your normal EDH table, and those slime counters are going on every creature you don’t control. That’s pretty strong if you ask me, and the fact that Toxrill has a card draw engine attached to it on top of that is just even sweeter. This works equally well either as a commander or part of the 99, and I honestly think that it would already be a $20 card if it were mono-black.

Prices in Europe are, as expected, a little lower for this EDH-only card, and so if you have access to that market then I’d grab some copies under and around $10 there. Over on TCGPlayer you’ll be paying a little more at $12, but I think that’s still a reasonable price to pay for what I think should be a $25 card in the not-too-distant future. There are also the Showcase variants at around the same price, but I think those arts were a swing and a miss. The Double Feature versions are…fine? but not worth paying the extra $4 if you ask me; the regular copies should do well here. If you do want to gamble on some extra arbitrage, there are €55 Double Feature foils on CardMarket – a card which is over $200 on TCGPlayer (last sold copies around $120). I won’t be taking that bet, but if you’re feeling lucky…

Now onto a Double Feature foil that I do think is worth it: Edgar, Charmed Groom. I’m nearly surprised at how few Edgar decks have actually been built, but when you have the opportunity to play Edgar Markov as your commander instead then there’s really no competition. Nevertheless, the Charmed Groom has found a nice home in the 99 of lots of Vampire tribal decks, and for good reason. This card is going to be so annoying for anyone else to deal with unless they can just straight-up exile it, because otherwise it’s just going to keep flipping and making tokens and buffing your Vampires and flipping and…yeah, you get the idea.

There are five different versions of this card out there, and so I think the play is to look at the ones with low supply: Double Feature foils. There are only six listings on TCGPlayer and not many more elsewhere, so they’re already getting difficult to pick up. Europe has a few more but not many, albeit at a cheaper price point. We’ve already seen some of the more popular Double Feature foils hit sky high prices (mythics over $200 etc), and I don’t think it’s unreasonable to expect Edgar to be pushing $50 before too long. People that want the most premium version of this card are going to pay for it, so make sure you’re going to be the one selling it to them!