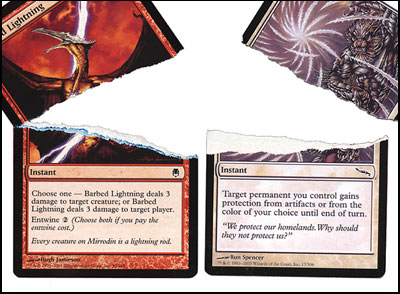 Now, it’s true that some cards are truly damaged and unplayable. Some are so warped that they cannot be used in tournaments, and I respect anyone who won’t keep such cards. But for many players, if it looks okay-to-decent in a sleeve, there’s no problem. You won’t get as much in trade as you would an undamaged card, but you’ll get more than you expect. In some cases, people won’t ask for less at all.

When you’re trading online, then you’re in a much trickier area. I’ve had multiple experiences where cards arrived in a different condition than I expected, and I’ve had people say I sent Slightly Played cards instead of the Near Mint I promised them. My advice in this regard is to be open and honest. Communication is everything. If there’s a chance of a problem, scans are good, pictures are good.