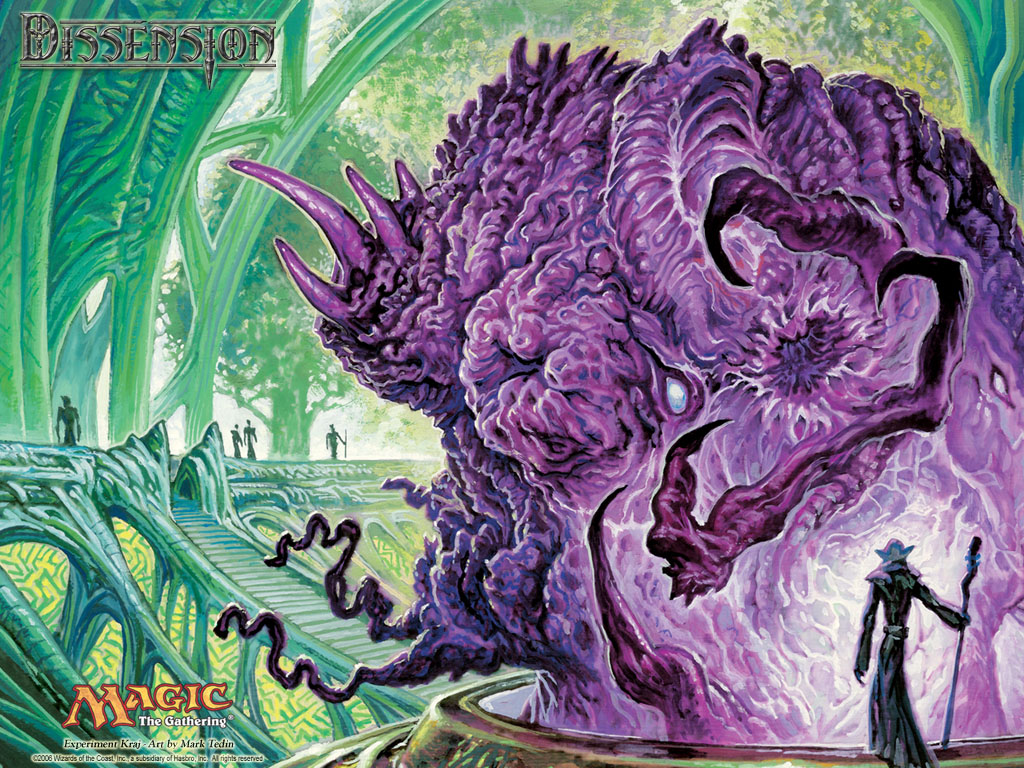 I do not consider myself proficient at very many things, but I am very good with the concepts of EDH: the methods of deck construction, the spirit of the format, and the wide range of things that are allowed in the search for fun.

Any financier, casual or professional, has to understand the casual formats in order to grok why on earth some cards have the price they do. It’s important to understand that while Magic has all sorts of constructed awesomeness, it’s still mainly a friendly, casual, kitchen-table game. In fact, that’s been the key to its success: appealing to such a wide swath of players. Constructed formats cause price spikes, while casual stars see slow and steady growth.

Today, I want to help you understand a little more about EDH and its principles, so you can see why the Rules Committee bans and unbans what it does. I gained good value picking up Kokusho before its unbanning, and I made a little selling into the Staff of Domination hype at its unbanning.

At its heart, Commander is all about interaction and experience. It was put together by judges who wanted to play swingy, splashy, uninhibited Magic. It is a way to unwind and to explore the quirky side ideas that have come up in this game.

There are some common tropes. Every EDH player considers a tribal deck at some point. Every player thinks about random deck ideas: an all-creature, or no-creature, or only certain sorts of art, or a deck designed to win via infinite combos. We often give thought to foiling out a deck, or making it all foreign, or if you’re Judge Emeritus Sheldon Menery, you embark on a foil Italian deck.

I would be remiss if I didn’t include Cube players with EDH players. There’s a lot of similarities, from the number of certain cards needed to the desire to make your interpretation unique.

One of the key features of Commander decks, and therefore a financially relevant idea, is that all sorts of play styles are possible. Are you a griefer? A combo savant? Do you only cast spells that cost more than eight mana? Whatever you’re into, EDH can provide. The founders recognized that fun is defined very differently from person to person, and don’t try to legislate that.

What they do legislate is imbalance, but they do so very selectively. Primeval Titan and his cousin Sylvan Primordial allow for huge mana gains, and are easy to abuse.

The issue that comes up when there’s a banning in EDH is this: they don’t try to ban infinite-combo cards. There’s no way to ban all of those without a banlist a mile long. Plus, they want to allow you that way of playing, if you and your play group enjoy that. What they tend to come down on are cards that are impossible to use ‘fairly’.

Allow me this example. Before PT got banned, it was in most green decks. As was Green Sun’s Zenith. I know that I would cast GSZ for three and get Sakura-Tribe Elder, or scrape by until I got to seven mana to get the Titan. It was simply the best thing I could do, and everyone at the table knew it. Getting the Titan or the Primordial out is such a huge swing, and sets up “waiting to die” board states.

Whenever a card is banned, the refrain goes up. “Why wasn’t [CARDNAME] banned too?!?!” Very often in forums, the cited card is Palinchron. This thing exists for no reason except to generate infinite mana. All you need is one land that generates two or more mana, and you’re infinite. It is not banned because infinite shenanigans is part of the game. Plus, with Palinchron, an instant-speed kill spell with the untap on the stack will solve the problem. There’s too many infinite combos to hate them all away. (Hi there, Kiki-Jiki!)

So what’s the financial bonus to knowing how these casual formats work?

The most relevant idea is that these players aren’t getting cards to trade. We trade for or buy a card in order to put it in a deck and keep it there. This cuts down on the number of that card in circulation, and inflates the price.

Case in point: the San Diego Comic-Con Planeswalkers. There is no hard data on the number made available, but those who got them either flipped them for immediate profit, are holding them to get more money later, or kept them for decks. It’s possible that some are simply showpieces in a collection, but these are not going to be found in random binders.

If you have one, you’re either playing it or keeping it until you’re ready to sell it. There are very few out there to be had. I’ve got an SDCC Garruk, and it’s in a deck and it’s staying there until I am desperate enough to sell pieces from my favorite EDH deck.

Another salient point is how often we build random casual decks and then just keep them in a box on a shelf. It’s not always worth the hassle to take decks apart. The high point for me was 15 EDH decks and that’s a lot to deal with. Several just sat unused for months at a time–few of us will get to play 15 Commander games in less than a month.

It’s a phenomenon not limited to Commander, though. We have a habit of putting old decks aside. I have a deck I built in 1999, jokingly called Turbo-Thallid, using those Fallen Empires cards to great extent, and using Earthcraft and Wild Growth and Fungal Bloom to power out lots of Saprolings. Thallids have gotten much better since, but I haven’t updated the deck in fourteen years. It’s a pet deck, and how would I even try to explain what format it’s for to new people? It’s not even Legacy-legal!

Rest assured, though: Earthcraft will eventually get unbanned in Legacy, and I’ll be happy to sell into that hype.

Where EDH shines as a format is when people find a common power level. If all of your friends enjoy counterspell wars and copying Time Warp, more power to you folks. If your Commander games end up as Giants vs. Faeries vs. Elves vs. Beasts, that’s awesome too. There’s no one way to play it.

What surprises many tournament players is how often Commander decks are deliberately underpowered. It’s more than skipping dual lands and fetch lands. It’s about leaving out cards that end the game abruptly, or lead to twenty-minute turns. In my Experiment Kraj deck, I don’t have any abilities that tap to add mana, because I have lots of untapping abilities. It’s no fun to me if I deliberately and consistently go infinite.

These games are not always about winning. These games are about the experience and the interaction. Mr. Menery said it best: “The secret of the format is not breaking it.”