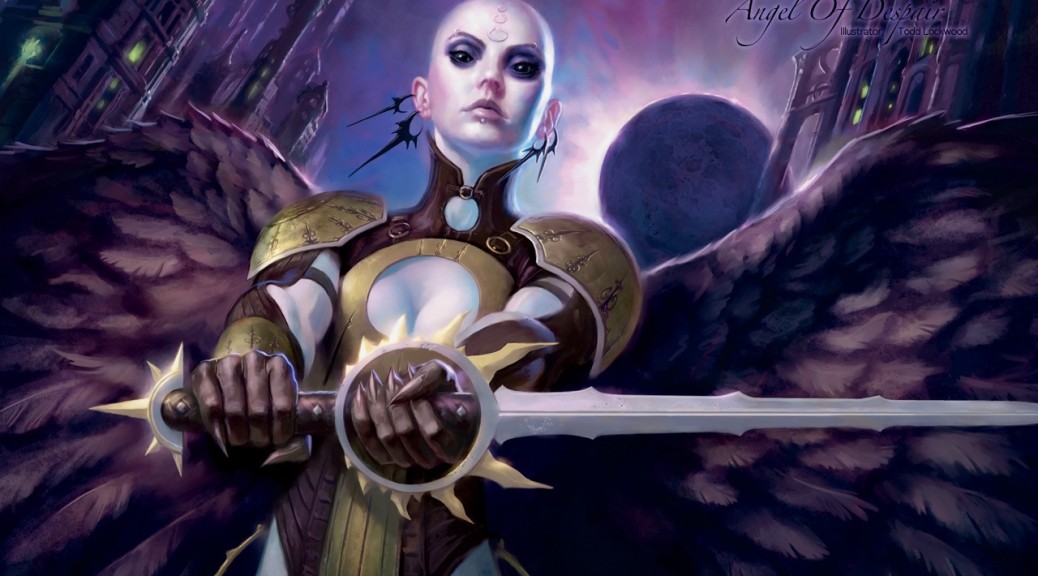 Welcome to the new year! This year, we’re getting a new Modern Masters, the death of Core Sets, and a faster, more frequent rotation out of Standard. It promises to be a heck of a year, and so I’ve made a few promises to myself. Perhaps some of them will resonate with you.

I know it seems like a simplistic goal, considering how much I love this game, but due to moving and babies and lots of other little things, I didn’t play nearly as much Magic as I wanted in 2014. I’d like to attend a couple of big events and get to FNM at least once a month, and attend my first Prerelease since Gatecrash!

At least once in 2012, 2013, and 2014 I sold big chunks of cards for big real-life expenses. Car repairs, moving money, and to buy a new Tempurpedic bed. (I cannot recommend this bed strongly enough!) Mostly, that came out of my EDH decks, as I’ve downsized to six Commander decks, from my maximum of 15 a few years ago.

I’ve never put a lot of capital into my collection, but taking value out this way, several times in a row, has really lowered the value of the things I have for trade. I don’t regret the loss, as I got what I needed when I needed it, but I would like to spend some time increasing the value without taking any out.

Right now, I have four binders of varying sizes: I have my main trade binder, a second one with all my signed cards and speculative cards, a third which contains only cards I’ve taken out of Commander decks, and a fourth that is a Conspiracy foil set-in-progress.

I will trade out of the second and third, but only when there’s something I really want. The problem is that I’ve taken so much out of the first binder, so I often end up showing these other two. I need to go through and classify things better.

This is a goal all of us should have. Introduce someone to Magic. It can be in any format, any method. Go slow, and remember that this is a very complex game. Magic’s player base has grown an incredible amount these few years, and if you get the chance, you should bring someone new into the fold.

I love watching Twitch’s stream, be it the official Magic channel or SCGLive or anything live. I especially love coverage of high-level drafting, but somehow, I’m addicted to watching streams or recordings. The archives of video coverage are enough to get me lost for hours and hours, unless it’s hours and hours of Whip of Erebos mirror matches. Ugh.

Skipping shuffling/sideboarding time is the best argument for watching archives and not the live stream. But I’ll watch anyway!

I kicked the habit several years ago and I’m not going to get drawn back in until the program is worth my time. Is it a condemnation of MTGO or praise of SCGLive that I’d so much rather watch the stream than play online?

#7: Get that foil foreign Akroma, and WB Scrubland & Badlands

My Kaalia of the Vast Commander deck has a lot of foreign foil Angels. I’ve got foil Japanese Avacyn, foil French Angel of Despair, foil Italian Kokusho, the Evening Star, and so on. There’s a foil German Akroma, Angel of Wrath that I’ve had my eye on for a while and I really want it! So I’m resolving to buy it this year. Or just upgrade my Portuguese into a foil Portuguese.

On a similar note, I traded for a white-bordered German Plateau for the same deck, and now I need a Badlands and a Scrubland to match. Sure, this is a lofty goal, needing such a specific edition when I already have duals, but everyone needs a goal to aspire to!

I have had excellent luck in the past, buying single on eBay and then trading them for full retail value, when I picked the card up for significantly less. In this way, I turned one spare Plateau into a Verdant Catacombs and a pair of Cavern of Souls. Buying cards that are expressly for your trade binder is an excellent way to infuse value into your binder, as long as you are upfront about the premium for trading Legacy cards to get Standard cards.

Put another way: I buy a Vindicate on eBay for $12 + $2 shipping. I would feel comfortable asking for a pair of Bloodstained Mire and a Siege Rhino for it. Thus I’ve added $27 in value to my binder for about half that in cash. Winner!

And oh goodness…Vindicate in French is ‘Justification’…I might have a new resolution!