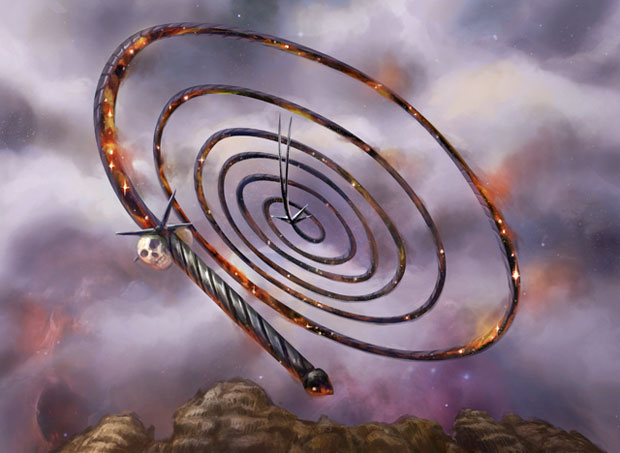 With Whip decks holding down the fort as one of the core pillars of the 2014-2015 winter Standard season, it’s no surprise that this central feature of the recursive mid-range decks has been sliding up. Given that the card was available for as little as $1.25 in late summer 2014, there was some solid profit potential to be realized here if you pushed your chips in on this powerful card ahead of the curve. With relatively little Theros being opened these days, it could perhaps top out at $7-8 in a best case scenario, but I’d be happy to get out now with the inevitable rotation decline on the horizon for early summer.

We’re not yet at peak supply yet for Khans of Tarkir staples, as the set is going to be drafted alongside Fate Reforged for a couple of months before being left behind in the wake of Dragons of Tarkir and Modern Masters (2015 Edition). As such, buying in now on this card may not be ideal, since a early summer lull is likely unless the graveyard decks keep putting up top table performances. That being said, I love the card in both foil and non-foil for the long term as it’s a great casual/EDH card with a unique effect and a palatable casting cost. I’ve been picking up quite a few copies in the $3 range along the way, looking to double up within the year on half the stock and hold the rest long term.

If Standard has proven to have a color combination of near infinite variation this fall and winter, it must be red, white and blue. Between the token, tempo and Jeskai Ascendancy combo variants, this oft-reprinted pain land has been in high demand and is on track to carry on the fine tradition of blue/red dual lands leading the pack on price. If you picked up copies last summer in the $3-4 range, now is a fine time to be trading out or selling off, as they are unlikely to move much higher before rotation.

Don’t be fooled by the short-term variability. As a confirmed reprint for Modern Masters (2015 Edition), Emrakul should have nowhere to go but down. You’d be wise to exit on any copies you’re holding while you can.

The lesser Lilianna is seeing occasional play out of Abzan mid-range decks as a 1-2 of aimed at generating additional card advantadge in the grindy world of mid-range deck on deck violence. She could top $8, but if you got in last summer around $4, or had older copies sitting around, go ahead and get out now while the getting is good since she’s unlikely to increase her presence in the metagame any further before rotating out again next fall and her multiple printings and midling power level make her a poor long term target.

Now normally Future Sight rares are a great place to go looking for cards that could explode in price, but the presence of Chromatic Lantern in the EDH scene and high chance of a further reprint of this lesser card put non-foil copies of Relic far down the list of interesting pickups. The recent downswing doesn’t seem to have a definite source, but I’d stay away just the same.

While his fellow Khan Narset is looking pretty tasty right about now, Zurgo isn’t getting enough love from any format to even consider jumping in. Just accept that he’s going to be hanging out in bulk bins and move on.

This card on the other hand is chock full of broken potential and is really just waiting on a Top 8 showing or two to shift into high gear. It also needs to not see a reprint any time soon, but that’s looking unlikely given that notable reprints are largely about keeping Modern affordable or filling gaps in Standard at present and this card fills neither role. Because it’s already hovering around $10, it’s the kind of card I’m not into hunting until I see it do something drastic on camera, but be ready to pull the trigger fast if that ever happens.

If you’ve been holding copies of Sarkhan since the September 2014 pre-order period, you’ve already gone on quite the ride, with copies peaking in the mid $30’s before steadily declining to half that level due to softening Standard play and literal tons of product being opened. That being said, I’ve been starting to acquire copies under $13 where I can since I fully expect him to have a 2nd coming either due to dragon specific cards this spring or general scarcity next fall. It’s not a spec I plan to go really deep on, but I’ve got a few sets waiting for the bounce.

Here’s another card waiting for an excuse to climb a bit more, likely in the form of the banning of treasure cruise and the general rebounding of the value of Jund strategies in Modern. This kind of land destruction isn’t something WOTC seems eager to reprint, but he could still show up in MM2 this summer and wreck all the lovely gains he’s made over the last few years up from as low as $6 in early 2013. If you don’t need your extras, leave some potential and risk on the table and reap the rewards of a sweet spec.