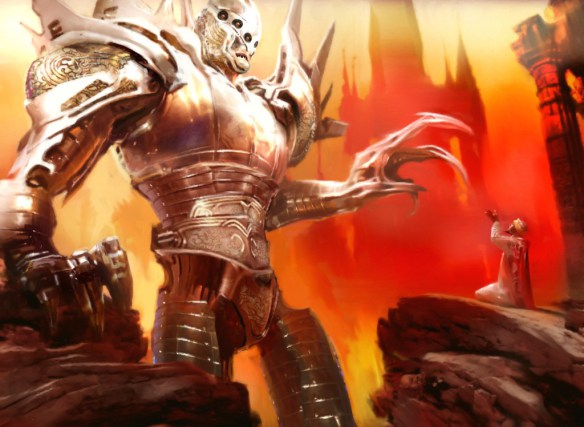 In case you didn’t know, I play a lot of commander games. I love the interactions of 99 cards, I love offbeat tribal decks, I love seeing the unique creations we build in the format.

We’ve had two generations of the preconstructed commander decks, and each time, we have gotten some legends who truly deserve to be built around.

One thing that has happened with each set of decks has been that some of the legends included in the precons have gotten a lot more attention, focus, and decks built in their honor. From the 2011 set, I’d have to say that Kaalia of the Vast and Riku of Two Reflections got the most decks built around them. All of them got tried but these two did some unique things. Kaalia is a way to cheat costs on some popular and overcosted tribes and Riku copies spells and is a combo-enabler, traits which led to some enjoyably degenerate decks.

Animar, Soul of Elements has seen a recent spike to near $20, indicating that I’m not the only one who enjoyed chaining together creature after creature. (Want some real gas? Put Animar in charge of an all-Artifact-Creature deck. Start with Frogmite, add a Vedalken Archmage, chain all the way up to Blightsteel Colossus. Affinity never had it this good!)

In the newest incarnation of preconstructed decks, there’s been one clear winner: Nekusar, the Mindreaver. This card has led to price spikes in lots of other cards, such as Wheel of Fortune and Forced Fruition.

However…there’s an added wrinkle. Nekusar just happens to be one of the legends included in the same Commander deck as True-Name Nemesis.

TNN is still a $40 card, despite the deck itself being found at big-box stores randomly for $30. Is it possible that Nekusar decks are becoming so popular not because of the legend’s power or flavor, but because people are buying the deck for the Nemesis and then have a pile of cards to work with?

Wizards is about to change their distribution model too. Instead of retailers getting one of each C13 deck, they will get two Mind Seize and three random decks. More supply is coming!

This represents an opportunity, even if we missed out on some of the already-spiked cards. Perhaps Underworld Dreams is going to spike next, as a backup. Maybe it’ll be the new Hag who also damages opponents who draw cards.

For an example of what I mean, look at the price of Avacyn, Angel of Hope. Released within a few months of Kaalia, the two of them are the best of friends. Avacyn is a pricey card, especially in foil, though she sees no play in any Constructed format. Avacyn’s only drawback is her mana cost, and luckily, that is what Kaalia is best at dealing with. Nekusar and Forced Fruition work together in a similar way; it’s hard to imagine a curve of five into six that will result in more shenanigans, since every spell played means seven damage.

The Nekusar decks are going to get a real tool in the Magic 2015 enchantment Waste Not. It’s cheap and it rewards you for making others discard, which many of the Nekusar effects also cause. It’s not as direct as something like Megrim or Liliana’s Caress, but it enables so much more.

Seizan, Peverter of Truth is creeping upward, and I’m really surprised to see Memory Jar at its current price. I have had a good time trading for Jars at $4-$5, or the FTV foils at a couple dollars more. Eventually, Nekusar players will catch on to the power of not just drawing, but discarding too.

So if Nekusar is the first general to cause spikes in price, because of True-Name Nemesis, which generals will cause other spikes? Let’s look at one general from each deck.

I love lifegain decks. I’ve had one myself, based on Vish Kal. I like that this Esper deck gives you three very different generals to play with, and Oloro has the unique effect of free lifegain no matter the zone he’s in. What do we do when we gain life? Anything!

For my money, this is the most likely general to cause price increases, for two reasons:

1) It’s free lifegain.  If you’ve ever piloted a lifelink deck, you know that’s the trick: gaining the life. It’s not about what tricks you have, it’s about having the trick AND some way to gain life. This is automatic, costs nothing, and works all the time, unless he got shuffled in somehow.

2) Toxic Deluge is one of the best sweepers in Legacy. It can go early and late and have exactly the effect you need, and there’s no resistance or protection from having negative toughness. This is the package that the still-pricey Deluge is in, and could get the same bonus that Nekusar got for being in the TNN package. More copies of this deck being bought means more of Oloro, and more people seeking lifegain synergies.

Prossh, Skyraider: Breath of Fury, In the Web of War, Goblin Bombardment

The trick with Breath of Fury is that you don’t need to be attacking the same player over and over again. All it takes is getting through once, and that enables you to start chaining sacrifices and attacks together.

In the Web of War is so amazing. It’s two mana more than plain Fervor, but the instant bonus and haste is incredible, especially if you spent a lot of mana on Prossh. Sure, you can sacrifice tokens for all sorts of effects (I love that Goblin Bombardment was included in this deck) but why not do what comes natural, and send those Kobolds to do some work. Sacrificing can always be post-combat.

Gahiji, Honored One: Aurelia, the Warleader, In the Web Of War

Gahji would be great in a token strategy, but doubling his effect with either Aurelia or ItWoW is what we love to do as Commander players. Sure, it’s a bit of a win-more play, but getting twice as much for each creature seems like a lot of fun to anyone.

In the Web of War is in the perfect place for a spike: It’s from an older, underprinted set, it is available for cheap in lots of places, and fits either of these strategies remarkably well.

Roon of the Hidden Realm:  Minion Reflector and Strionic Resonator

First of all, my apologies to anyone who knows the Phasing rules. I’d originally been trumpeting the utility of Teferi’s Veil, but it turns out that Phasing doesn’t trigger leaving or entering the battlefield effects. I’m not sure how I got that so confused, but that’s my bad.

Instead, here’s two other cards that will combo well with either Roon’s ability to flicker or with creatures that want to be flickered. Both cards allow you to double up on the enter/exit abilities of any creature for an extra two mana. The Reflector is especially spicy, since no tapping is required. This means you can use the Reflector as often as you have the mana and the ability to flicker!

Both cards come from a less-opened set. Shards of Alara was forever ago, with a significantly smaller print run, and M14 had pressure from Modern Masters lowering its expectations. The Resonator already has a devoted following, but if Roon becomes the new popular kid, lots of others will jump on the Strionic bandwagon.

The best part of compliing this list was thinking of awesome cards, and then seeing that they were already in Commander 2013. It’s pleasing when Wizards can jump on a theme this way.

One thought on “Chicken or Egg? Omelette!”