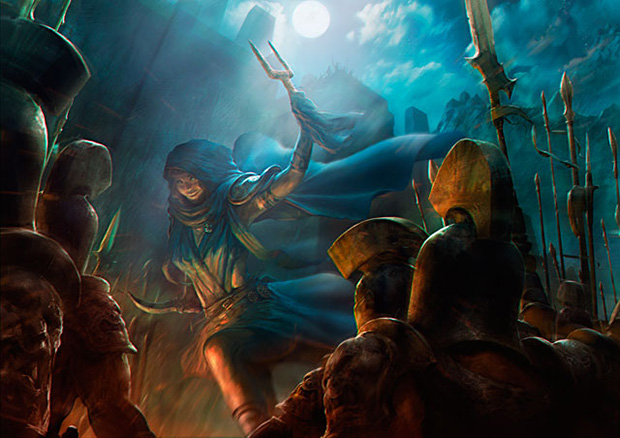 Mishra’s Factory was the original “man” land. It allowed players to cast Wrath of God and then animate the Factory and attack with a creature in control decks.

It is still used in Legacy as a play set in Pox and Standstill decks.

These decks try to keep the board clear of creatures through heavy disrutpion and get there with lands that can attack.

They have also seen the occasional 3-1 in MODO Legacy dailies.

The rise in popularity of UWR Miracles also has people experimenting with Factories in Stoneblade builds.

I advocate trading into the hype while people are brewing. If you can turn a play set of these into some duel lands I would not look back.

Temple of Plenty has seen full adoption in Selesnya and Junk builds in Standard.

I think that the scrylands are well positioned for rotation once the shocklands leave Standard.

I would trade for them with emphasis on this, Temple of Malady, Temple of Enlightenment and Temple of Silence.

Putting together the Urzatron is powerful in any format. It can be tough to recover from a turn three Karn Liberated or Wurmcoil Engine.

Different builds can throw out an early Batterskull or Sundering Titan which make it difficult if not impossible for aggressive decks to recover.

If you play the Urzatron in Gruul, Blue, Azorius or other combinations you need to have a play set of each of the three lands.

The biggest thing holding them back is their five printings including Chronicles and Fifth Edition where they were common.

It still think they are good solid holds. Anyone thinking of playing in the Modern format should at least pick up a play set of each to have to play with.

They are not powerful enough to ban and the biggest risk I could see would be further reprints.

Nekusar, the Mindrazer decks continue to be popular and powerful. This is one of the most efficient ways to restock your hand and deal seven damage to each of your opponents.

More Mind Seize decks will find their ways to retailers at the rate of two boxes per shipment.

These are still surprisingly easy to trade for and with such a low margin a pretty safe bet.

Necropotence is one the most powerful card engines every devised.

It is also one of the most iconic cards Wizards has ever printed.

This is the only foil copy available for Vintage or Cube players.

A lot of people are going to be playing with it in Vintage Masters online.

The beta shows the lowest price of $13 and the highest buylist of $10.

This shows a great deal of confidence in the growth of this card.

This is a great long term hold.

This card is a rare from Tempest. That means there are not many out there. It is also on the reserved list so there will never be any more.

This card has a negative spread. You can buy it from one retailer and sell it to another at a profit.

This is as good a recommendation as I can possibly give.

Grab these any time you see them. They have probably been rotting in trade binders for years.

The power and flexibility of this land are considerable when you can reuse the counter using bouncelands and Amulet of Vigor. They are used as three of in that deck.

I have seen this card listed for $5 in a few places and some sites still have them for less than $3.

The beta on this card is only $0.42. That makes this a safe and smart target.

I would actively trade for these. The deck has already caused significant increases in the prices of Azusa, Lost but Seeking and Primeval Titan.

This is all smoke.

I don’t think anyone is actually buying this card at this price.

I looked at ebay sales records and it looks like everyone is buying theirs for around $3. The highest buylist I see is $2.51 but most vendors are offering about a dollar less than that.

That tells me that there is not a lot of confidence in the price of this card.

It is an Antiquities rare on the reserved list but it really does not belong in any deck. It is a collector’s item but that does not explain the recent surge in interest it has seen.

Am I missing something here? Does anyone know what started this?

I honestly feel you could buy any early rare on the reserved list and it would be at least as valuable to you as this card.

For about the same amount you can get a Mana Matrix or Planar Gate.

Both of those are about as rare and have awesome applications in Commander or Cube.

Legacy Manaless Dredge is picking up in popularity and it shows.

Nether Shadow can safely be dredged away and will be back to fight, block or be sacrificed to Dread Return to reanimate Balustrade Spy or Golgari Grave-Troll.

The deck is a popular budget option for a format known for costing thousands of dollars to play competitively.

This deck can be put together for a little more than a preordered booster box of Conspiracy.

There are still a lot of budget cards in the deck that have room to grow.

Chancellor of the Annex is cheap and can keep opponents from landing a turn one Deathrite Shaman to attack your graveyard.

Flayer of the Hatebound is also a bulk card and adds a unique effect which can close games out of nowhere.

I expect the pieces of this deck to continue to grow as interest in Legacy grows.

Breathstealer’s Crypt is a rare from Visions. It is on the reserve list.

It gives you information. Everyone will know what everyone is drawing. It costs life or cards.

It is obvious what is going on with this card – it is the latest Nekusar target.

You make your opponents draw cards and drain their life anyway. You can deprive them of precious creatures and finish them off.

What is left for the Nekusar deck?

Kederekt Parasite, Otherworld Atlas and Reforge the Soul are all still bulk.

Pro Tour Journey into Nyx was not kind to the Minotaur Wizard.

The event came and went and not a single copy was found in the Top 8.

Even Monowhite Aggro and Boros Burn decks do not necessarily run him anymore.

The time to trade these away was a few months ago. Their only use was Standard and it has seen its day.

I would move them as quickly as possible because once rotation hits they will be bulk.

I would try to get scylands or even shocklands for them if you could.

Shatterstorm is a powerful answer to Affinity decks in Modern and Legacy.

Unfortunately the popularity of these decks have waned as people have adjusted their sideboards.

This is part of the danger of investing in sideboard cards.

If they do too well then the threat is neutralized and demand sags.

This leaves and opening for the threat to return and for interest to rise again.

I would trade these away as it is on its way down. It jumped from $5 to $20 over the course of a few weeks. It has been trending down again.

Try to pick them up again once they drop below $10.

We recently saw a burst in demand for Commanders. Every enemy wedge Commander that was under $10 was snatched up and an increase in price drove this card from $ $6 to $15 over night.

The frenzy is dying down and prices are settling.

The price has come down but it is stabilizing.

If you want a fun commander I would hold onto these. I expect the price the price to slowly start climbing from here. It just will not be at the rabid pace we have seen.

Storm has been testing well in Modern. Shivan Reef helps fix mana and does not come into play tapped.

It has been steadily growing over the past few weeks. I would look at this as a speed bump.

Modern season is rapidly approaching. This could be a good opportunity to grab three or four if you are looking at playing UR Storm.

Did you trade yours away yet? Everyone else is doing so.

It is an interesting card but not so powerful that I see a strong reason for the price.

If you want to exile a creature in black we now have Silence the Believers and Gild. I think this will just continue to decrease in value.