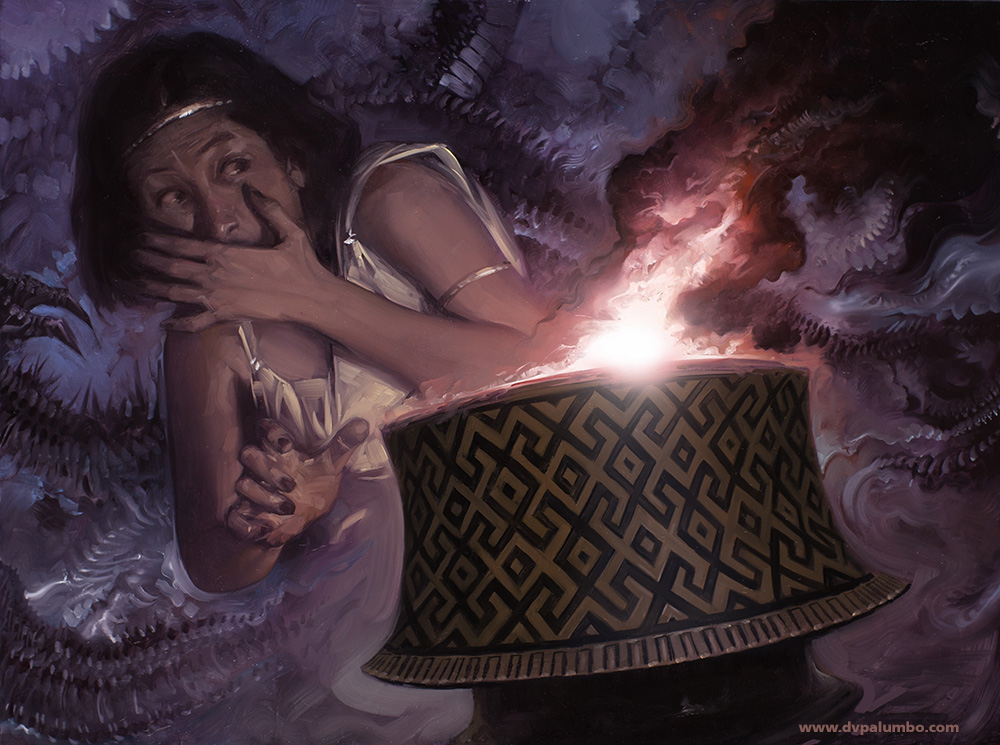 I recently booted up a game called Hearthstone.

You may have heard of it like I have. There are thousands and thousands playing this game as we speak. It is made by Blizzard and features similar mechanics and a lot of shared cards with the discontinued World of Warcraft trading card game. However, it is entirely online.

Hearthstone is well designed. It features a well thought out tutorial and a brilliant user interface that is flashy and intuitive. It took me only a few minutes to figure out how to do virtually everything in the game. The crafting interface makes up for a lack of trading and is extremely innovative. “The Arena” is similar to drafting in Magic Online except that you can stop and start in between games and picks and the drafting is single player.

People are flocking to this game in droves. Streams have went from a few hundred viewers to competing with League of Legends. This is astonishing growth for any game and shows how well designed this game really is. Even many Magic Online streamers have moved to Hearthstone.

Magic Online is, by contrast, poorly designed. It never really occurred to me how broken Magic Online really is until playing a better game. The sheer apathy towards improving Magic Online is insulting to everyone who pumps insane amounts of money into the system.

What exactly is wrong with Magic Online?

If Magic Online is so broken that their premier tournaments, the Magic Online Championship Series, and the Pro Tour Qualifiers are being cancelled, something is seriously wrong. Many professional players use Magic Online as a platform to play PTQs if there is not one locally. Aspiring players who live in more rural areas may not have an opportunity to play Magic Online.

One comic line from the release follows:

“our high standard of fidelity”

If you have played Magic Online, you’ve experienced the irony of WOTC’s official jargon. If you have not booted up Magic Online you cannot even fathom the joke that WOTC maintains a “high standard of fidelity” for Magic Online but I hope I can give you even an idea of what long time players have experienced.

Imagine you are new to Magic Online. You want to play standard. You boot up Magic Online and sign in. 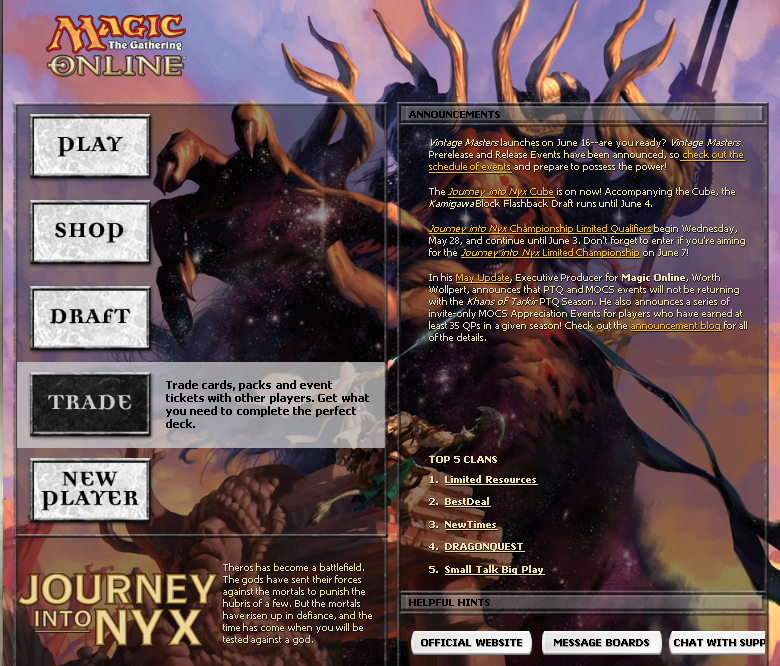 This is what you see when you first log in. You say, “oh, I need to trade for the cards… what do I trade them for? Money?” Eventually, after much googling and asking random people, you realize you have to use the currency of event tickets to purchase cards. Thus, you buy event tickets. Now you are ready to trade with all the other real live human beings on Magic On– 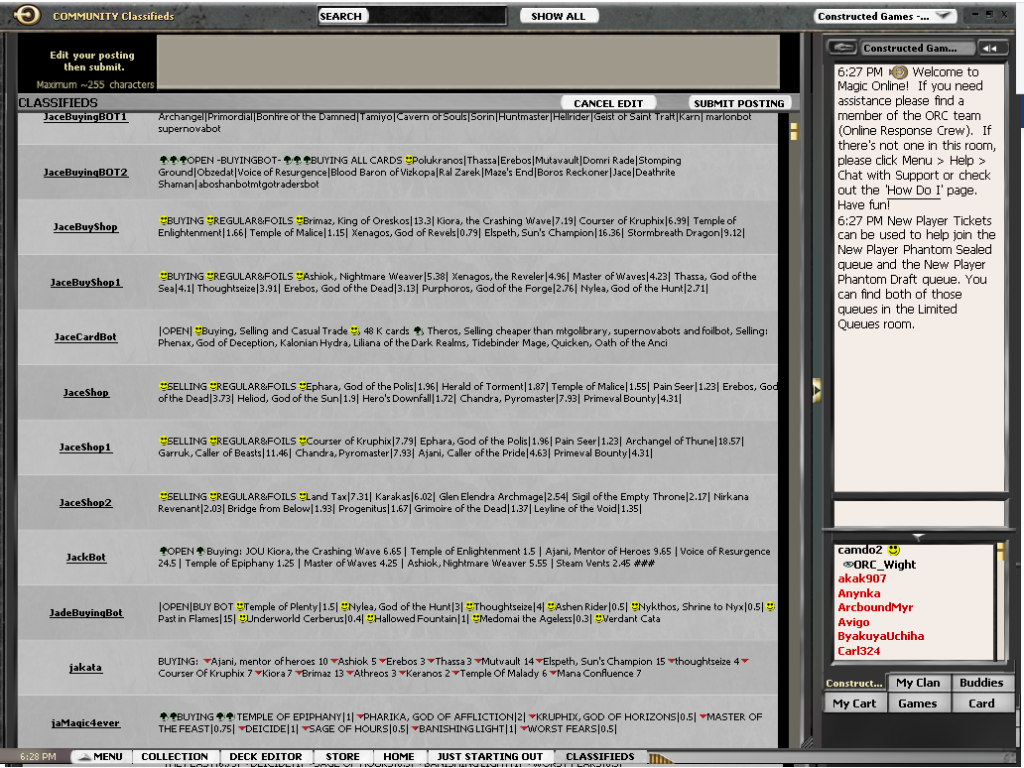 What is this bull? I guess there are bots to get the cards you need but how would you know that? How do I know if I’m not getting ripped off? Are there standard card prices? Can I have a fraction of an event ticket or will the bot store the credit for me? What if the bot runs off with my credit? Do I have to keep credit on a bunch of different bots just to get the cards I need? Can I trade with real people? Are there real people who want to trade with me like in real life?

These are all obvious questions that you would have to ask if you were playing on Magic Online. The only good answers are ones provided by third parties. WOTC, despite incentivizing the use of bots due to the broken and unhelpful trade system, fail to address the obvious issues that a new player would face. They sidestep them and pretend like they don’t exist.

For example, look at this conversation between me and one of the WOTC employees on Magic Online:

As told, I go to the auction chatroom

I find nobody. Ok then, I’ll check the classifieds again…

There are almost no human people trading for cards on Magic Online. You MUST go to the bots or you will never successfully construct a deck.

Why didn’t WOTC create a system to find other people who want to trade the same cards? You could put a “want” list and an “offer” list. It would be simple to program this even with the online currency. However, we are left to sludge through the bots to find all the cards we need. These bots need to turn a profit and therefore cards have a steep markup compared to the buy price from the bots.

A common counter to this argument is “well, card shops are the same way.” Sure they are. But there is almost NO way to get cards by human trading. This turns off many more casual players who just want to build fun decks with their friends. It makes Magic Online a grind and only for the most masochistic of us.

The poor design aspects of Magic Online are very apparent once you consider why Magic was a popular game anyways. People enjoy the social aspect of gaming. They want to hang with their friends and play Magic. They want to build decks and show them off. They want to trade with other players. Magic Online ignores all these elements and supplements a poorly designed interface instead of creating an engaging game.

I recently vented about the worsening prize support. There have been so many recent reductions in prize support for events and lowering the amount of events for various formats. The support in the community shows how everyone else is angry about this.

Many say “well, redemption makes it so the heightened prices and low prize support have some paper backing.” However, I can say it no better than /u/falterfire:

It is painfully obvious how this is a big deal. While WOTC cancels many events, they are charging 7 dollars a pack for a brand new product.

I wish I could say things are looking better for the Beta. They aren’t.

Trading is even worse on the beta and virtually impossible for anyone to figure out in less than an hour. You have to “create a trade binder” and fill it with the cards you want to trade. However, you also have to mark it as the “active trade binder” which took me a while to figure out. Then there are the bugs. I know it is in beta but the bugs are astonishing. Cards appearing in double on the trade client is inexcusable and really annoying.

Just about everything with the beta is more annoying or broken. Sure, it looks a little nicer. It still sucks and addresses zero of the underlying problems with Magic Online.

Why You Should Care

It would be nice to say that this is the extent of the problems with Magic Online. In all honesty, I’m barely scratching the surface in this article. People pay so much just to get onto Magic Online that we should be entitled to a working, efficient client.

Ultimately, all of this has a major effect on the paper market as well. Magic Online is where many of the professional players test their decks and test the new drafting formats. If less people are playing PTQs online there is less obvious experimentation with the format. This means there are less opportunities.

It also looks really bad on the game. The relationship between WOTC’s client and Hearthstone are analogous to the differences between a Geocities blog and Twitter. WOTC’s client really looks like trash. It looks like a ten year old designed it (perhaps that is insulting to ten year olds, they would probably design a better system). It is the laughing stalk of the gaming world. Yet, WOTC makes bank off of people who sludge through the embarrassing client just to play the awesome game that Magic is.

If Magic Online plays poorly, less people will want to play because the testing platform is annoying. The fundamentals of Magic Online’s design were all wrong.

This is why I wanted to create an initiative to boycott MTGO until the issues are addressed. There was a lot of support from the community and if you want to participate be sure to follow: https://twitter.com/mtgoboycott

Magic Online shouldn’t suck, but it does. The long and short of it is that it is an embarrassment to anyone who has ever played Magic, especially when compared to its main competitors. What issues have you had with Magic Online? Leave it in the comments.

9 thoughts on “Magic Online Sucks and You Should Care”