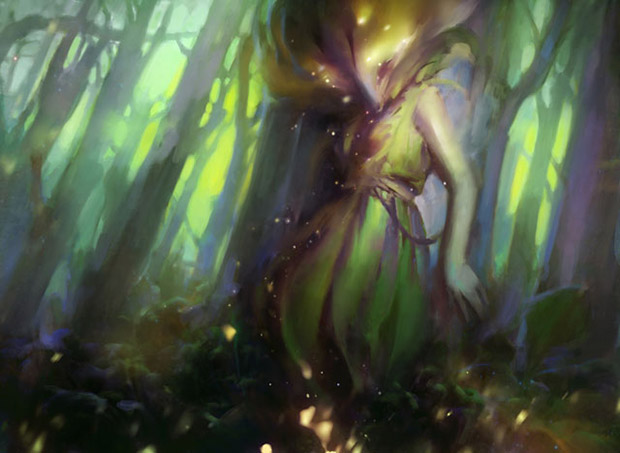 A little over a year and a week ago Modern Masters hit the market. Stores couldn’t keep boxes in stock and when they did manage to acquire some they were drafted immediately. Everyone with a platform to shout from was encouraging you to sit on as many boxes as you could because they would be gold down the road. (They were right). Grand Prix Vegas, the only Modern Masters GP, became the largest Magic event in history. As far as cardboard was concerned, Modern Masters defined the summer of 2013.

This left Dragon’s Maze in an unenviable position. With Modern Masters on the market, why would anyone want to draft DGR? Return to Ravnica was mostly a solid draft format, although it’s probably the only one ever for which there was a real call-to-arms to ban a card. Triple Gatecrash had been considerably less enjoyable than RtR overall, even without the threat of flat-out losing the game on turn two to a 1/1. When Dragon’s Maze finally showed up to tie it all together players were a bit fatigued with the block already. It didn’t help that it quickly became apparent that Dragon’s Maze had a single good card. It would take months before Blood Baron started showing up in Standard, and even then that meant there were only two decent cards to open.

DGR wasn’t that fun to draft, had little financial incentive to open, and was completely overshadowed by Modern Masters. The only thing that kept people opening it at all was that MM was simply so difficult to find at times that if you wanted a draft you may not have had any other options.

Two weeks ago Conspiracy showed up in stores all across the country. Wizards stepped pretty far outside the box on this one. We saw the first supplemental-product-only Planeswalker. “Draft matters” cards were included in every pack that did mega-sweet things such as add additional packs to the draft. Games were meant to be played as 4-man free-for-alls instead of the industry standard 1v1 duel. The reception was loud and it was positive. Players love Conspiracy.

For our purposes Conspiracy is a bit different than MM in a few important ways. For one, it’s more accessible to the average player. Someone wandering into your average Wednesday night draft may have balked at the easy $30+ to draft MM. Even if the value in the packs was relatively equitable to a standard expansion set, or possibly even better, it was still a big pill to swallow. A player would still have to turn those cards into cash or store credit in order to draft again. Conspiracy on the other hand has the standard MSRP that core sets and expansions have, which means it’s no more expensive to draft than JBT.

Another checkmark in Conspiracy’s column is who it appeals to. MM was squarely aimed at players already invested in or looking to invest in Modern, which is not the cheapest of formats. Drafting MM was pretty dang cool but it was spikey as heck to boot. The casual player, the silent majority in Magic, wasn’t rushing out to draft MM. But while MM was daunting to the casual player, Conspiracy is a magnet for the type of player that considers making a squirrel deck. Not only does Conspiracy pull all the more casual and multiplayer-oriented players that MM didn’t, it is still novel enough that the same spikes that enjoyed MM will want in. The end result is that while MM’s audience was a bit more niche, Conspiracy is drawing a far greater sampling of players.

A third, and possibly the most important difference between the two, is availability. Modern Masters was quite tough to find at times, with plenty of draft urges going unfulfilled. It was a limited print run that didn’t see as much distribution as players had hoped it would, as evidenced by the fact that it did diddly-squat to the prices of many of the most important cards in Modern. (Tarmogoyf actually got more expensive). Conspiracy though? Conspiracy is not a limited run. This means that as long as vendors like your local store or online outlets are still requesting product Wizards is going to keep printing it (to an extent.) This is a big deal – so long as players want to draft it for the next several months Conspiracy will be available.

Herein lies the whole point of the article. Modern Masters did not overtake drafting at stores around the country. It supplemented it. Players continued to draft DGR, and occasionally got to enjoy an additional MM draft. Conspiracy, though, will eat many more JBT drafts than MM did DGR. This means Journey Into Nyx is likely to be less opened than even Dragon’s Maze.

When you walk into your LGS this week to draft, which are you hoping for? Triple CNS or JBT? How much do you expect that to change in a few weeks? Conspiracy is the first time Wizards has done something like this before and it will be years before we see it again. Most will want to get their fill while it’s readily available. You can get the regular draft experience any old time, whether it’s triple GTC or triple Khans.

The last several blocks have typically had more than a handful of powerful and expensive cards in the last set. Avacyn Restored had piles of cards that were important to Standard and another whole set of cards that maintain considerable casual appeal today. New Phyrexia was dense with power and value. Rise of Eldrazi is dense with expensive mythics. Dragon’s Maze is the odd man out on that front with really only Voice and Blood Baron. If Journey Into Nyx behaves similarly to its predecessors, it too will have several strong Standard cards alongside product capable of maintaining casual appeal.

Let’s review. Journey is a spring set. Spring sets often are full of relevant cards to both spikes and casuals. Third sets are drafted considerably less frequently than the rest of the block, which leads to a smaller quantity in the wild to begin with. A month after Journey was released Conspiracy was made available. Conspiracy is a unique draft format that does many things that have never been done before in Magic. It appeals to casual players and tournament players alike. Supply is large enough to be drafted by anyone that wants to. The reception has been excellent. Oh, and Vintage Masters released on MTGO a few weeks after Journey went digital.

All of this points to one thing. Very expensive Journey Into Nyx cards.

Right now the prices are not out of control, but just give it some time. Temple of Malady has already climbed from the $4-$5 at preorder to an easy $9+. There are many other tournament-caliber cards in the set, such as Silence the Believers, Eidolon of the Great Revel, Eidolon of Blossoms, Battlefield Thaumaturge, Dictate of Kruphix, and Ajani, just to name a few. There are also the casual hits like Godsend and Sage of Hours.

Journey Into Nyx was already poised to have expensive singles, and with Conspiracy freely eating away at draft demand, we’re going to see a great deal of pressure placed on a set with a very low amount of open product. Make sure you have everything you personally need from the set before September and give that spec you have in mind a second look.

An article posted on Tuesday over at DailyMTG recapped the status of almost all the Planeswalkers we are aware of right now. Each Planeswalker is given a few sentences to explain what they were last up to and what they may be doing right now. It turns out that nearly half of the walkers are in some way connected to Zendikar. Along with a buddy of mine on Twitter pointing out that a year ago Mark Rosewater was talking an awful lot about Zendikar on tumblr, there are signs pointing to a return there next year. That is a gap of six years, just one less than the gap between Ravnica and Return to Ravnica. None of this is real proof of course. Just something to consider as we see what unfolds in Khans.

4 thoughts on “Journey to the Center of Your Wallet”