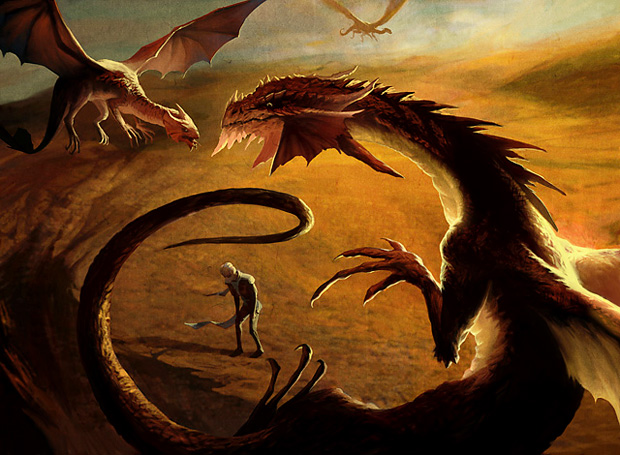 There are five wedges in Khans of Tarkir; five three-color combinations. Look at the back of a Magic card, choose one color, and add the two colors opposite. Those are the five wedges.

These wedges coincide with the color combinations of the original five Commander preconstructed decks. There is nothing guaranteed about Magic and reprints, but with the legends from the first set fetching some high prices, it’s worth looking at their prices, both now and if they are reissued into Standard.

There is precedent: Scavenging Ooze hit $40 as part of these decks before falling, and then being put into Standard last year. I am basing these ideas on reprints coming as rares, and not mythics. If these get the red-orange treatment, their value will be much higher.

I’m also going to cover the Planar Chaos dragons, because we’ve been told that this set is all about dragons! If there’s a time to reprint these into Standard, there won’t be a more thematically appropriate one.

In many ways, this wedge had already seen a lot of development as the Treefolk wedge during Lorwyn block. There’s even a unique three-color land for it in Murmuring Bosk, and the three-mana 5/5 that is Doran, the Siege Tower.

First of all, neither of the new legends has had a foil version printed yet, so there’s not a more-demanded version. Being in Khans would mean that the foils commanded a true premium, as existing decks sought to upgrade their commanders.

Teneb is interesting, as there’s signs that this will be a set that utilizes the graveyard. I can see board states where you attack with your dragon, pay three to reanimate a blocker. That’s a useful line of play, though! Teneb would be bulk if reprinted as a rare.

Karador is a more universal creature, whereas Ghave would have been a great fit for Jund, with tokens and sacrifices all over the place. Ghave probably wouldn’t return until a Saproling-infested set, so I think Karador is more likely. He’s not going to warp Standard, because he can’t be replayed the same way as Commanders can. Ghave would be more problematic, I think, because it only takes one sacrifice effect for him to take over. Think Blood Artist, or Parallel Lives.

Both new cards would fall into the $3-$5 range if reprinted as rares, but the foils would be at least $20.

It’ll be nice to stop calling this America, or some variation. This is a popular combination in Modern and Legacy.

Neither of the new legends has been foiled yet, and Zedruu’s would be more in demand. The ‘give it away’ style of deck is suprisingly popular.

There is a history of multicolored creatures having a higher power and toughness. Fusion Elemental as an 8/8 for five mana, or even Loxodon Smiter as a 4/4 for merely three mana. Ruhan would not be out of line, as just a big beater who is bad at defending. Zedruu would see no Standard play, though that wouldn’t stop people from trying. Cards and life are a big draw, but the creature is so vulnerable and there’s a lot of work to set up that first card and lifegain.

Numot’s ability ends games quickly in a duel. In an EDH game, you can hit one player, and destroy someone else’s lands, but head-to-head, it’s going to be over and fast.

I think Ruhan is more likely to be reprinted, both of these are about a dollar now. Reprinting them won’t affect that, and foils will have a higher demand for Zedruu than Ruhan. All three would end up as bulk rares, with a $10 foil for Ruhan and $15 for Zedruu.

Sultai: Black, Blue, Green (Most often, we refer to this as BUG and that’s another acronym I’ll be well rid of.)

The Mimeoplasm was in Commander’s Arsenal, giving a foil at $12 that’s about double the original. Damia is at $12 anyway, because drawing cards is awesome. At seven mana, and needing to live a turn to refill your hand, I think Damia would be a safe addition to Standard. Her price would likely tumble to $2 or lower, though.

Vorosh’s ability is sort of silly in a duel. Take 6, then take 12. Not dead? Take 18. It has flying, so trample isn’t quite as needed, but in a world with Triplicate Spirits, chump-blocking seems likely. Just above bulk now, and bulk if reprinted.

A more interesting card is The Mimeoplasm. We have gotten several cards that hint at graveyard interactions, and this legendary Ooze might be a real combo piece. Imagine Satyr Wayfinder into Necromancer’s Assistant into Jace, the Living Guildpact. Activate that, then again the next turn. Your turn-five Mimeoplasm has a choice of nine cards to power up with. That’s a dream hand, but there’s going to be more to work with. I think this has a very good chance of being reprinted.

I don’t see The Mimeoplasm taking much of a tumble, but I would be very interested in the decks that utilize it. Expect the Ooze to be $3 or so if reprinted.

RUG is popular in Legacy, especially with Shardless Agent. I’m going to need a pronunciation guide for the khans. Does this rhyme with lemur?

Intet is intriguing. These five dragons are big flyers that hit hard and win more for you. This ability saying “Draw and play a card for free” is quite broken in Commander games, and I’m not sure that the extra color of mana will be worth it for any of the dragons. We might prefer to give up on a point of power, but keep it single-color and just play Mahamoti Djinn. Reprinting Intet would be a very cheap card.

Riku wants a foil quite badly. He’s a popular general for EDH games, because he can get a lot of effect from just a little mana. The card would drop to $1-$2, but the foils might be the most expensive here. I wouldn’t be surprised to see them at $30 or more. Riku can go infinite with Regrowth and Time Walk-style effects, and in colors that offer ramp dells and counterspells. Standard is a different story, I can’t see such a costly and weak creature being useful.

Animar is the most linear and explosive of the 2011 legends. Believe me, it’s very easy to build a critical mass of creatures, and that doesn’t even allow for artifact creatures. Animar has protection from the colors that don’t use damage, so once he’s out of Lightning Strike range, he’s going to wreck. I believe Standard would try to use this, but I’m not sure how good it would be without things like Garruk’s Packleader and Primordial Sage to keep the engine running. I think the price would settle around $5, with foils being $20.

Oros has alternate art and neat foiling as befit a prerelease promo. That version can be had for just a couple of dollars, and while it’s handy to clear the board of small nonwhite flyers, you’re hitting in the air for six damage. This is probably the most useful of the abilities, as it can stabilize in a race.

Tariel is a very fun choice for reanimation decks, or decks that want to not be Kaalia. This price is entirely due to scarcity, and reprinting this card would tank its value to near-bulk levels. Seven mana for no immediate effect is not going to do much in Standard.

Now, Kaalia. If you click on the set of Commander cards, sorted by price (like this) then you’ll see that Kaalia is the second-most valuable card in the set. None of the other legends are within $10 of her, and the reason is because she enables three very powerful tribes. I have seen Kaalia decks that focus on just one of the three tribes, and that is a fun restriction. As an innocuous 2/2 flyer for a difficult mana cost (without green to fix mana, she’s tough to cast) she’s no big deal, but then she’s got a Dragon Tyrant crashing in alongside her!

I think that Kaalia has a good chance of being reprinted, primarily because this is a set that likes Dragons. Her price is going to come down significantly if this happens, though I’m not sure how far the Commander’s Arsenal version will come down. A lot depends on if the same art is used, because new art means there’s more than just a set symbol’s difference.

I don’t think that any of the Commander 2011 legends would break Standard, or Modern. Reprinting them as rares (if it happens, it would likely be a cycle at rare, we’re already getting Zurgo and the Khans as a cycle at mythic) would tank their value, but it would present some interesting decks to be built.