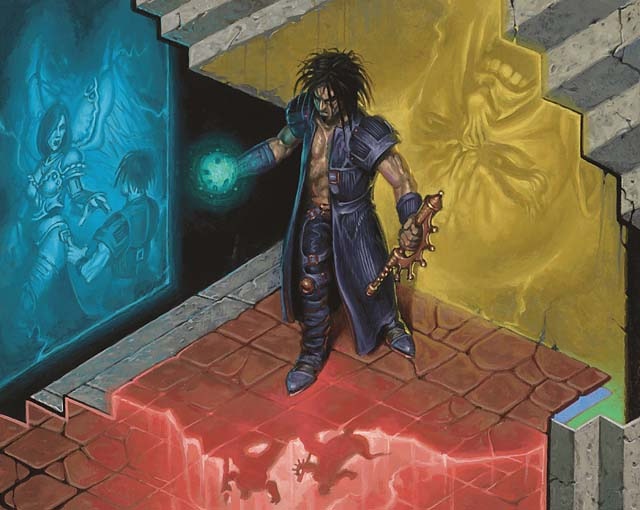 One of the most important things in this game is learning to read the tea leaves. Watching tournament reports, learning to evaluate cards, and knowing basic archetype strengths and weaknesses can help you evaluate data and start to learn to predict player and price behavior. The same is true of watching WotC’s behavior. MaRo’s blog, their two-year development cycle, their seven year “plan” cycles – watching how they work over the years can give you insights into where we’re going next, and might help you make and/or save some money along the way. We’ve had a lot going on over the last month or so, and I believe it’s telling us that we may be entering some new territory over the next few months. As always, this could be totally off. But that’s not going to stop me from introducing potential future #1:

1. Standard may be changing.

A weekend or two ago it was announced that all four PTs in 2015 would be featuring the Standard format.  When asked why Modern was not being featured, the response was that Modern was stale and not “dynamic,” didn’t feature the newest MTG release, and that they didn’t want to have to resort to bans in order to get a fresh format every year. Standard certainly makes sense, in terms of featuring the newest release, but the last two years of Sphinx’s Revelation certainly do not bring the words “dynamic” to mind. The last few sets have only had a marginal shake-up of the format.  The best decks usually have enough good tools to continue being good, and often end up getting even more tools to work with.

And WotC knows this. Which makes the decision to go mono-Standard a bit more puzzling, in that the “change” they desire doesn’t seem to be something that regularly occurs in the format. On the most recent godbook survey, players were asked how they felt about the length of time that cards spent in Standard.  However, Aaron Forsythe recently ruled out a possible three-year extension to Standard, as it would keep problem cards in the format for far too long.

What, then, could be the change? The only other alternative solution would appear to be a move to an “eight set” rotation, rather than the two most recent blocks.  Much like seven-set Extended, when a new set was released, it would simply knock the oldest set out of the format.  This would most definitely create the “dynamism” that WotC is looking for on the Pro Tour, as each event would have cards exiting AND entering the format simultaneously, keeping the format churning month to month.  This would also extend the length of time that 2nd/3rd sets are relevant in Standard, eliminating the “seasonal” cycle we’ve seen with PTQ seasons, rotation, and the concurrent ebb and flow of prices.  It would also almost certainly increase sales for WotC, now that all sets would be in Standard for approximately two years.

And most importantly, it would “solve” most of the issues they have been fighting against with the format in regards to tournament exposure.  Moving to an all-Standard PT set with the current Standard setup would likely start to result in more bans over the long run. Culling MTGO results doesn’t seem to have accomplished much in this regard, as the very large data set provided by SCG, TCGP, and WotC Organized Play results in metagames being very quickly established.  We know they (and we) have been frustrated by their inability to make open-ended, interesting format.  #SaitoWayfinder, Pat Chapin, and many others do their very best to try and both troll the world and open up the format, but the relentless tyranny of Sphinx’s Revelation or Thoughtseize decks ends up quickly stamping out the fun for people.

A change to Standard would be a radical change, but they’ve been making a number of those over the last 5-6 years. This would simply be another one, and it’d be one they could easily revert if, after the next year, it didn’t test very well. It’s a risky proposition, but one that could pay off huge for them.  Speaking of things that are going to pay off huge…

8/13 edit: Apparently, I am not alone, as Chapin himself suggested a six-set rotating structure in a recent SCG article. I do think, however, that this would be too problematic, regarding both manabases and sets not being in Standard long enough, and that eight sets would keep things in a much happier place for most players.

Many of us have assumed that MM2 was coming this year, given the massive success of MM1, and the two – year Dev cycle that WotC works on. We’ve been getting indirect confirmation of this over the past few weeks. The first indication was at the SDCC panel. The small “bridge” set for Khans block is being released in January, a month earlier than normal. The large Spring set is coming out in March, one or two months earlier than normal. On the PT schedule, the Summer PT isn’t occurring until August. Meaning that there is now a 4-month gap between the Spring PT in early April, and the Summer PT in early fall.

And what could possibly be located, smack dab in the center of those? 3 “Location TBD” GP tournaments happening simultaneously on the last weekend in May. (notably, NOT Memorial day.)  An unprecedented occurrence, one that we were told to “mark our calendars” for by Rich Hagon on the final day of the PT broadcast. The locations clearly aren’t “TBD” – they work too far out in advance for them to be undecided. So why hide them? Because announcing Vegas would give away what’s about to occur.

But that’s not all. Three Modern GPs are scheduled immediately following this event, one in the US, one in Asia, and one in Europe.  I can’t tell you what to sell, or when, but I would strongly suggest moving Liliana of the Veil, a card that’s near-guaranteed to be reprinted in the set, or in a near-future core set like M16. Also, something we’ll also likely see? The Eldrazi legends. Why?

3. We are going back to Zendikar for at least part of the next block. Oh, and Delve is in Khans

In case you hadn’t been following Mark Rosewater’s Tumblr, Blogatog, he answers a lot of questions there. He likes being able to get the direct feedback, and contrast it with his market research, as well as to just get quick feedback regarding product direction and mechanics that he can’t otherwise get.

About a year ago, he suddenly started asking players a lot about Zendikar a. What would they expect of a return to the plane? What mechanics? Did they like annihilator? Would they expect the OG Eldrazi legends? And 3-4 months later, suddenly, we started to have answers. Annhilator was “likely” not returning when the Eldrazi did. The next time we see the Eldrazi legends, they would “likely” have new cards.  You read MaRo’s tea leaves by noticing which questions he’s choosing to answer. This question in particular reads a lot more interestingly now than it did a few weeks ago: http://markrosewater.tumblr.com/post/57332759132/do-you-think-that-theres-enough-space-in-colorless-vs

In a similar vein – Mark’s brought up Delve a lot in the past month, and he’s previously emphasized it needed to NOT be in a GY-focused set, since it eats up graveyards and promotes non-interaction with them. Given this uptick in mentions, alongside the description of the mechanic at the SDCC panel, it’s almost certainly the BUG mechanic for Khans.

But, going back to Zendikar – we can also look at the most recent Planeswalker Guide on the WotC website, where there’s a very strong focus on the Planeswalkers who surround the storyline of the original Zendikar block.  By itself, it means little. But in conjunction with Maro’s blog, the M15 usage of Zendikar, and all sorts of other factors, the constellation being formed points in a single direction.

4. The fetchlands are coming.

Aaron, Mark, and the other members of OP and R&D were shocked at the reaction to the Standard PT and PPTQ announcements, particularly as it related to the Modern format. From our outside point of view, it shouldn’t be surprising at all. But why was theirs different? Because they were aware of many things we weren’t.  Modern Masters 2 is one of them. But simply printing Modern Masters 2 wouldn’t really do much to address the larger issues with manabases in the format being hyper-expensive, the biggest barrier to entry problem that the format has.  So in order to get players into the format, you need to reduce those costs and make the manabases accessible. That means reprinting the biggest chokepoint in the format, and doing it through Standard.

Now, it’s been six years since we last saw Enemy Fetchlands, and thirteen since we last saw allied ones. We’re at the point where they’d naturally be reprinted anyway. Zendikar II (Reign of the Eldrazi?) is coming up in Fall 2015, and would be a natural fit for them. But in a year in which they are going to be making a massive push for Modern in May, that’s actually too late for them to assist, especially when trying to bump turnout at an event like GP Charlotte, run by none other than SCG, TO for the record-setting GP: Richmond.

This means that an appearance in Khans block by the OG Onslaught Fetchlands is actually quite likely. Especially given that we’re time-travelling in the block to an “Earlier Era” where dragons are everywhere. This would allow for the Enemy Fetchlands to be shelved for later, or simply reprinted in Zendikar block.

It is very unlikely, btw, that these lands show up in Modern Masters 2. They’re well aware of the barrier to entry problem that they present, and reprinting them in MM2 simply wouldn’t do enough to ease the supply issues on the basic lands. If we do get a land cycle in there, the Shadowmoor/Eventide Filterlands would be a much more appropriate set to use, given that they seemed to let people play a little too fast and loose with mana while they were in Standard. The allied manlands are another potential option, but given that putting the Enemy ones in Zendikar II would be an easy call, I suspect we may end up seeing those allied ones show up in a core set some day soon, given the need to reprint Colonnade.

And with four reasonable predictions out of the way, I’ll end with a crazy guess.

Morph, Arcanis in the Duel Deck (Onslaught), the first wedge cycles (Apocalypse), time travel (Time Spiral), a dragon Set (Scourge.)  Where else could Tarkir be taking place but Magic’s home? 😛 Yeah, I’m probably wrong on this, but conspiracy theories are fun!