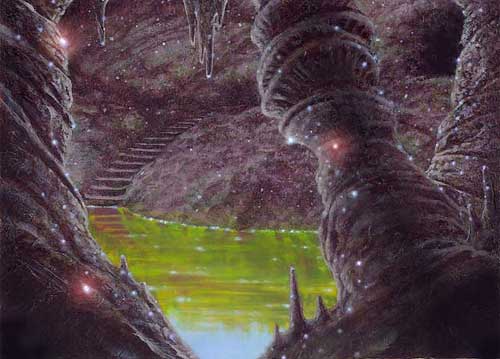 I have one all-foil Commander deck. It’s tribal Vampires, with Garza Zol, Plague Queen at its head. I didn’t plan to foil it out at first, it just sort of happened that almost all the creatures were foil and I kept finding good prices and trades for the lands and accessories. Eventually, I was 80% foil and took the plunge, swapping out things that could never be foil (Oh, how I miss having Shauku, Endbringer!) and trading for foil filterlands, scrylands, etc.

One thing I didn’t have until recently was a foil Reflecting Pool, because there was only one foil version from Shadowmoor. It has been super-pricey due to a printing error: all of the foils have a Plains watermark, increasing the collectibility. When Conspiracy came out, I knew this would be my chance to get a foil Pool at a reasonable price.

Imagine my surprise, though, when I see that there’s a significant gap between the two foils, with the same text, art, and frame! There are indeed some people who feel strongly that they have to have the original (in this case, the first available foil, as the Tempest version has no foil) and are willing to pay a high price to have that. Wrong watermark or not, that’s a big jump in price due to collectors.

In honor of them, I’d like to share with you a few examples of how much value being ‘original pack foil’ can add. My goal here is just the cards that have an expansion symbol of difference, and I encourage you to add your own to this list in the comments. I’ve looked for them, but I am not perfect.

Akroma, Angel of Wrath – $20 for Timeshifted foil, $30 for Legions foil

Just $10 to get rid of the purple expansion symbol seems worth it. The Timeshifted sheet causes all sorts of collector headaches!

One of the most busted cards in Commander, the foil prices are surprising. There’s an FNM version with similar art by Terese Nielsen, but the easily-recurred way to reuse anything has massive casual appeal.

Shards block foils have additional price pressure on them, thanks to the all-foil packs Wizards printed at the end of the block. This higher number of foils is mainly pushing prices on commons and uncommons down, and not that many people were willing to drop $15 on a single booster.

I once did a draft with these though, and it was a lot of fun to have all foils!

How I wish we had some hard sales numbers on the different sets. It’s entirely possible that there are a lot more MM foils out there, because 8th and 9th were close to the dark days of Magic. This was a surprise find, though, I thought these would be more expensive, considering how good they are in Eternal formats, and how often Legacy and Vintage like to foil out their decks.

Another card that had extras due to the foil Shards packs, there’s also a Duel Deck foil with very different art to be had for the same price as a nonfoil.

The FTV foil is frankly unappealing next to the original, which had great tricks with clouds to make it clear just how huge The Soul Of The World is. If you have the extra $11 for the original, go for it.

A gap of a few dollars doesn’t surprise me too much, but this being more than double is really surprising. Looking at the price history for the Eventide foil, the price went up when Modern Masters was around. To be fair, that summer, lots of things went up as the hype to join the format was at its peak. Things have stabilized since.

The FTV is the same art but it is also the same vertically shiny foiling process that turns some people off. If you wanted to skip that, I’d respect your choice. This was the only foil available for some time, which may be why the price is still so much more.

For a long while, this was a strong option for Reanimator decks, blasting lands and setting the other person back significantly. And perhaps to do it twice! Ashen Rider is just an upgrade on that process, though.

Weirdly, this effect is in place for Garruk and Liliana as well, but not Ajani or Chandra. Ajani Goldmane has a Pro Tour foil that might be affecting the foil prices. Garruk and Liliana have Duel Deck promos, as well as Duels of the Planeswalker cards, but these are still showing big steps in price from set to set.

If you’re hardcore about getting the first foil, be my guest, but keep in mind that in a lot of cases, you’re paying a premium for it. That premium is on top of the premium you’re giving to have foils in the first place. I understand completely, though.

Join me next week as we explore some of the spoiled cards and see what you’ll be seeing at kitchen tables for a long time!

One thought on “Value of a Symbol”