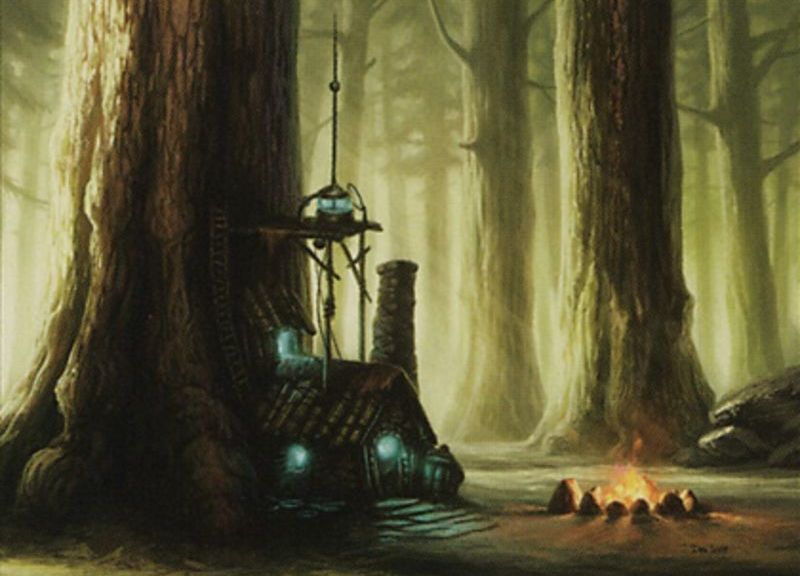 A little more than a year ago, I gave you a list of things to pick up and it’s time to check in and see how I did.

Verdict: Miss. I thought that with a year of new players looking for them, the price would go up. Supply is huge, though, after four printings and they have hardly budged in the past year.

Verdict: Hit! It’s a big, fast, cheap Dragon who clears the way. It’s great in any format, and your eyes still go wide when it’s on the wrong side of the table.

Verdict: Hit! Easy enough, as lifegain is one of the most fun effects to build a casual deck around. I’m looking to see Felidar Sovereign reprinted soon, maybe even in the coming Commander decks.

Verdict: Hit! Great in token decks, great in Angel decks. Gorgeous art, too, and that never hurts in the long run.

Verdict: Miss. Despite the combo with Enter the Infinite and seeing play in Show and Tell decks, the price has stayed flat this entire year. I remain optimistic, but I don’t know when the bump will arrive.

Verdict: Miss. It’s crept up a little in price. Not enough for my purposes today, though.

Verdict: Miss. It’s gone up to $3 this year, and the spread is getting close to null, meaning that buylist prices are almost the same as retail value. I might need to give it another few months, but today, it’s a miss.

Verdict: Miss. The price hasn’t budged, likely due to the multiple printings.

Verdict: Miss. Ugh. It’s actually gone down in price during the past year, indicating it’s not being used very much at all. Maybe it was just too oppressive in Standard and no one wants to relive that.

Verdict: Hit! And then some! These never made it as low as I’d hoped, but if you got them at under $1, they have doubled up in value. If you have any, I’d trade them soon, though, because these are easy to reprint.

Verdict: Miss. Another card who was above my target earlier this year, he’s come back down to earth.

Verdict: Mega-Miss. He hasn’t been adopted in Modern, but this is a card that at least will be tough to reprint due to being double-sided, because it’s difficult to mix two-sided cards into a print run.

Verdict: Miss. They have ticked upward, but not as much as I’d hoped. They aren’t seeing much Modern play, something I overestimated.

Verdict: Miss. While his price did hit $30 earlier this year, it’s trickled back downward in the months since. Having this as the WMCQ promo didn’t help at all.

Verdict: Hit! I was close on Kessig Wolf Run, but the Township was dead on.

Verdict: Miss. The price has stayed flat. There are just so many good token makers to choose from!

Verdict: Miss. But to be fair, when she hit $9 around Easter, I got rid of all of mine. Hope you did too!

Verdict: Hit! Or close enough. he was a cheap pickup at rotation and has paid off nicely. Remember, I’m not looking for huge gains in one card, I’m always trying to increase the overall value of what’s in my binder.

Verdict: Hit! He’s actually the most valuable card in Dark Ascension. I don’t think he’ll be in the Commander decks this winter, since we’re already getting Gisa herself. There’s a chance this breaks $12-$15 by Christmas.

Verdict: Hit! It costs seven, but it’s so darn amazing! It’s nice that I was so close on the value here.

Vault of the Archangel
Prediction: $4
Actual: $1

Verdict: Miss. I was wildly optimistic here. The price has stayed flat, so my many copies are just lounging around.

Verdict: Miss. The duel deck reprint hurt. I think he might be around $15 if it wasn’t for the extra printing.

Verdict: Hit! And for all the reasons I laid out. I’m warning you now, though, I’m pretty sure she will be in the white Commander deck this winter, at which point her price will take a hit.

Verdict: Hit! It’s almost buylisting for my prediction of $1 now. Wait a little longer, and you’re there.

Verdict: Hit! It’s not blowing up Legacy (though $50 for the foil is a result of the Miracles deck) but it’s powerful and flavorful.

Verdict: Miss. But to be fair, it just got reprinted in FTV: Annihilation, which has kept the price down.

Verdict: Hit! I’m calling it a hit because he’s been at $1.50 as recently as three weeks ago. There’s a lot of EDH players who want this card banned because of the combo shenanigans it enables, so watch out for that.

Verdict: Miss. The philosophy of picking up planeswalkers while they are cheap is sound, but Tamiyo just hasn’t grown enough in price…yet.

Verdict: Hit! Yup, extra turns is good, no matter how much mana it is to cast. It’s important that you just get the extra turn, without any extra hoops, such as Savor the Moment.

Verdict: Miss. Still an awesome card, but not even seeing play with Kiki-Jiki.

Verdict: Hit! I didn’t think he was good enough for Legacy Elves, but the results don’t lie. Cast, bang, dead. Awesome in any format where eight mana is an option. (Watch out for some Modern decks with this too.)

Verdict: Hit! This is why I’m so confident in Aurelia, the Warleader getting big over time as well. It’s worth mentioning that she was at $20 for a while this year.

Verdict: Hit! Do I know my casual Angels or what?

Verdict: Miss. I mostly do, it seems. She is only good to build around, not add to other decks, and that’s important to remember.

Verdict: Miss. I love this land, I do, but it just hasn’t been in demand. We’ll see if Khans changes that, with all the new blue-green good cards.

Verdict: Hit! It’s been much higher recently and this is one of the cards that has really grown for me. It hit a low of about $10, and I traded for as many as I could at that price.

Verdict: Miss. Wow, I really was wrong about the lands, aside from Cavern.

There you have it! I was right on 42% of these (16 out of 38) and that would be closer to even if I counted the ones who beat their prices earlier this year. Lots of cards spiked in April and have trickled down since.

Overall, it’s clear I was too optimistic on two types of cards: lands and Planeswalkers. I now know to not go too crazy on the lands, and to lower my expectations when it comes to the planeswalkers. This is something to think about, especially with Jace, Architect of Thought being at sub-$5 along with Vraska the Unseen. Instead of expecting them to double in a year, I might instead think they will grow to a more moderate $7.

I also note that reprints and promos were a factor for some of these. This is a risk we’re going to run with everything not on the Reserved List, you need to be prepared for reprints to affect the price of non-foils.

It’s also reassuring that only a couple of these went lower than the price I recommended them at. I didn’t lose my shirt to any of these. Yet, anyway.

Thanks for sticking with me for this past year. I hope you’re tracking some of your predictions too!

2 thoughts on “Hitting and Missing Targets”