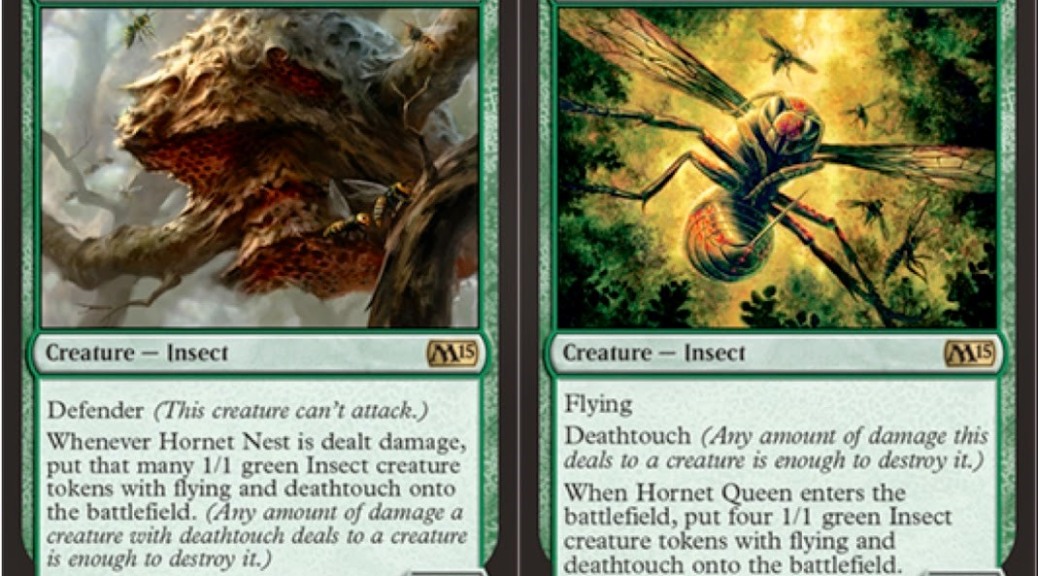 Across three major Standard tournaments this weekend, the story is clear: we are facing one of the most interesting and diverse Standard formats in recent memory. Sure, Jeskai Wins still managed to take down two of three major tournaments (Grand Prix Stockholm and SCG Open Minneapolis) but overall the field looked far more open than even a week ago with a number of new archetypes popping up as serious contenders for best deck in standard.

Across all three Top 8’s, here’s the archetype summary:

Keep in mind none of these decks can be considered lucky shots as all of them survived 12-18 rounds of Swiss. Clearly this is a format that will reward careful meta-gaming and skilled play as it evolves.

Noteable cards of the weekend included:

In other news Eternal Weekend crowned new Legacy and Vintage champs this weekend. In the Legacy portion of the tournament the buzz was all about the dominance of UR Treasure Cruise/Delver strategies, and it was a surprise to no one that the new Ancestral Recall clone took down the tournament with relative ease. Foil Treasure Cruise, which should by all usual standards by headed to $10 or less, is holding up well at $30 so far with only the spectre of a winter banning to hold it back thus far.

For the Timmies in the room, the presence of a Slivers based deck in the Top 8 had to be a highlight of the weekend, making all of those old rare Slivers in my trade binder shiver with anticipation of a Sliver revival.

The Vintage tourney was won by Marc Tocco playing his Oath of Druids deck with Griselbrand to a big win! Noteable cards in the Vintage decks included the strong showings by Dack Fayden, Treasure Cruise and Dig Through Time, much as expected.

Between a European Grand Prix, the SCG Open Series and the TCGPlayer 50K Championship, we have several prominent Standard tournaments this weekend worth keeping an eye on for shifts in the metagame. With Eternal weekend unfolding to crown champs for Legacy and Vintage, we’re also seeing the ascent of Treasure Cruise in U/R Delver builds. Here’s how events are unfolded and what it means for your paper magic collection.

Another standard Grand Prix Top 8 is on the books, and again we see strong evidence that this format is wide open for anyone with a creative deck and skillful play to challenge the top tables.

Day 2 Metagame Breakdown by WOTC coverage staff shows Abzan down to just 30% of the field, with Jeskai Wins joined by Mardu Mid-Range, both at 14% of field.  Sidisi Whip is the breakout deck of the tournament so far with multiple copies at the top tables and over 7% of the Day 2 metagame, again demonstrating that this format is far from binary and far from solved.

Mikael Magnusson is playing a Riddle of Lightning UR CounterBurn control deck leveraging Treasure Cruise/Dig Through Time for big damage alongside main deck Steam Augery, Nullify and Anger of the Gods. He’s 7-3 going into Round 11. Keru Spellsnatcher masquerading as an Ashcloud Phoenix jacks a Jeskai Charm pointed at it in morph mode to make one of the sexiest debuts of the tournament! Even jank rares are seeing play in KTK Standard. Magnusson then goes on to play an excellent Game 3 and go to 8-3 to keep his Top 8 dreams alive with his rogue deck design.

10:20am EST: Christian Seibold wins his final match to run 12-2-1 and likely lock up a Top 8 berth with an attack from his Sagu Mauler out of his Sidisi Whip deck. Worth keeping an eye on Whip of Erebos, Hornet Queen, Sagu Mauler and Sidisi, Brood Tyrant as events unfold. Sagu Mauler is my pick for underrated beater in a standard where many decks have trouble dealing with outside of hornet tokens.

10:35am EST: This battle for Top 8 between Lindstrom and Juza demonstrates the raw lifegain potential of Whip of Erebos while also showcasing the extremely grindy nature of it’s matches against other mid-range decks, that often push the match to full time and potentially deadly draws.

Grand Prix Stockholm represents the first major Euro-Standard gathering of the season, and so far the tournament is unfolding along expected lines.

After 9 rounds, heading into Day 2 the following players were all at least 7-1-1:

Note: We’ll post decks for these players as they are posted.

Mardu Mid-Range featuring Butcher, Elspeth and Wingmate Roc takes down the TCGPlayer 50K Championship in the hands of Andrew Baeckstrom!

Finals: We have a Mardu Mid-Range playoff for the finals! Butcher of the Horde will be on the podium this weekend no matter what, potentially exerting a bit of upward lift in his price. (Limited to this archetype, the ceiling is likely $4-5 unless it starts winning more broadly.)

Semi-Finals: There’s not a single Abzan or Jeskai deck left in the Top 4! Instead we’re treated to two Mardu Mid-Range decks, a Temur mid-range and a very sexy new R/G build. What a healthy format!

Update: It appears that there may be a 4-way prize split going on with the semi-final competitors, with highly casual games in motion.

After 15 rounds a Sunday Top 8 has been declared, and here’s how it breaks down:

Of special note here is the fact that the Mardu Mid-Range decks shoved into 37.5% of the Top 8. Sure, Abzan still nabbed 2 slots, but a win for Mardu here could be signal that the downward trend on Butcher of the Horde could reverse back into the $6-8 range, especially if the pattern repeats elsewhere this weekend. The presence of R/G Monsters, Temur Mid-Range and the Jeskai Ascendancy combo decks also demonstrates that many of their key cards need to be watched for action.  For Temur this means Savage Knuckleblade, Crater’s Claws and Rattleclaw Mystic are possibly on deck for gains. For Ascendancy, the central enchantment could easily be undervalued after losing value this week.

By far the most interesting deck in this Top 8 is the R/G Mid-Range piloted by Caleb Durward.  Running a full 4 copies of Hornet Nest in the main is a possible early sign that that card is undervalued in this format. A couple of sick on camera plays based on killing the Nest himself to drop blockers or attackers into play at key moments underscored some real under the radar potential that could see this card upgraded from sideboard to main deck duty in a broader context. Also of note in the deck were 3 main deck Setessan Tactics, set up to combo with the Hornet tokens deathtouch ability to wipe the board.  Appearances by two copies of Nissa, Worldwaker and 3 Xenagos, The Reveler, both planeswalkers most players had nearly written off as Tier 2, are also worthy of note. A win in the finals would put this practically brand new archtype into the spotlight and further demonstrate the depth of the current standard metagame.

Here’s our SCG Open Top 8 breakdown for the week: