Welcome back everyone! Last week we talked about Pucatrade, sealed product, what build of Stoneblade I’m going with, and the aftermath of switching standard FNM decks. This week, I will go over the fall out of GP Jersey and what that means for Legacy Hero, setting expectations for the trade binder, knowing your market, and speculation opportunities I am going to take to try and get a little more value for those dual lands.

I’m sure everyone that is reading this article is familiar with GP Jersey. 3rd largest Grand Prix in Magic’s history. That’s pretty amazing considering the two larger events, GP Richmond (Modern) and GP  Las Vegas (Limited: Modern Masters) were more popular formats. UWr Stoneblade took home the trophy. Two UWr Stoneblade decks in the top 16 is a great sign that the deck choice everyone made is a good one. The top 16 as a whole shows a pretty decent amount of diversity.

The core cards that make up the UWr Stoneblade deck can be used to build seven decks out of this top 16. That is great for peace of mind. I have talked to a few different locals that started to get into legacy before and they stopped because the decks they were building (Maverick) stopped winning. I wasn’t able to change any minds when I talked to them about it but I have to admit that I wasn’t very high on Stoneblade decks as a whole going into what I expected to be a field full of U/R Delver decks. I’m glad the rest of the field adjusted to handle it. I was reading Chas Andres’s article this week (StarCity Premium Content) and he covered the finances of Legacy pretty well. I highly recommend his articles. His articles are the only reason I sprung for SCG Premium. That aside, what he said near the end of his article this week really stuck with me.

“Even though Grand Prix New Jersey did a pretty good job of shaking up the format, I don’t expect much to change in the world of Legacy finance. Price-wise, the overall Legacy index is still slowly dropping, a trend that has been going on since the price spike last March. The market overcorrected in the first quarter of 2014, and prices are just now coming back down to where they were prior to that jump.

While the success stories coming out of the GP have the potential to rise in price, most Legacy-playable cards will continue to slowly drop in value until the next major bull market. This generally happens at some point between February and April each year, and if it doesn’t happen in 2015, we’ll have to re-examine the long-term future of these cards. For now though, it remains a fine time to both buy and sell Legacy staples without having to worry all that much about major shifts in price.”

If the price of the deck remains stable it makes my job a whole lot easier. I dont’ have to continue to chase cards as they get more and more expensive. Trying to get this done by April is a stretch but we will see.

I wasn’t able to make it to an FNM this week. Heck, I wasn’t able to do much of anything magic related. I caught about 45 minutes worth of matches from the Grand Prix. I was pretty concerned actually. I want to be able to tell everyone about all of the awesome things that I was able to do for Legacy Hero and how much progress I made. The bottom line is that I won’t be able to knock it out of the park week after week. This isn’t my full time job, at least not until we get that magic financiers union that offers great benefits. I will always do my best though. I would like to stress that I want people to email me any questions they have for me at mtglegacyhero@gmail.com. I’m not ready for a mail bag article yet but if there is something I’m missing or something you guys want me to talk about or try I will.  You guys just let me know.

Now we can talk about what I was able to do this past week. Here is a snapshot of what I sent out so far.

What isn’t shown is the deal I made for a LP Foil Hinterland Harbor. 800 points due to some surface scratches on the face of the card. I made sure to message the trade partner beforehand and see if he was willing to make a deal for the card based on pictures. I have had that card in my trade binder FOREVER because of those stupid couple of scratches on the top corner. Getting 800 points (8 bucks) for it is worth it to me.

The other cards are were just things I had laying around. I kinda cheated with the shipping. Part of my real job is mailing out paperwork to clients so I might have used stamps l had in my desk from work. I understand that not everyone has that perk so let’s talk about that for a second. The trade for the Swamp and the pair of Fertile Ground was barely above the cost of shipping. Is it really making me money by spending the money on stamps/shipping these cards? I think so. The cards I have sent out so far have been rotting. The best buy price on the Fertile Ground was Channel Fireball at $.02. Best buy list for the Archivist was StrikeZone at $1.35 but I don’t have enough other stuff to send them to make it worth it. This was the best way to cash out these cards. Now I will have 1109 points for the five cards that were collecting dust. Making the most out of everything you have is probably the most important lesson I can ever talk about.

Last week I had mentioned the white Commander 2014 I won and how I was undecided on what to do with it. The Grand Prix made my decision for me. I sold the Containment Priest out of it for $20.00 to a friend of mine that needed it. I will need that card for my deck later on but I can’t see that card holding it’s value for ever. Selling into the hype is usually the correct decision. I can already re-buy for less than I sold it for on ebay. The prices of the Commander 2014 cards are trending down. If you are a mtgprice.com protrader you get these handy little emails telling you about major inventory swings(which can indicate an incoming price increase) , major buylist increases, and important price gains/losses. One of the latest emails I received  showed me this 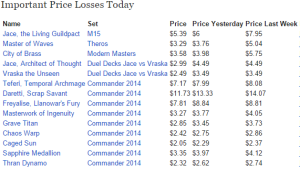 Nine cards on that list are from the Commander 2014 set. I’m not going to make any real money selling off the rest of the deck. I uploaded the remaining cards onto Pucatrade and put them into my casual binder.

The last thing I want to talk about this week is a speculation opportunity I took. I have been hearing for a little while about Kuldotha Forgemaster being underpriced. I saw a few tweets on the card from Chas and our fellow writer Travis Allen 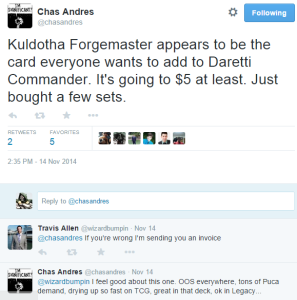 How could I pass up this kind of opportunity. I picked up a playset of them from my local store Monday, bought a few more on ebay, and traded for a couple more. I’m sitting on 15 of them now and I’m in for less than a dollar a copy. Is this a huge gamble. Not really. I agree with the people that said it is going to go up in price, but will it go up enough to make it worth it? Am I going to have to wait 3 years? I don’t think so but we will see.

That’s all I have this week. Next week I will go over knowing your local market, selling on tcgplayer and ebay, and maybe even have our first real trade for something. Maybe. Thanks again everyone.