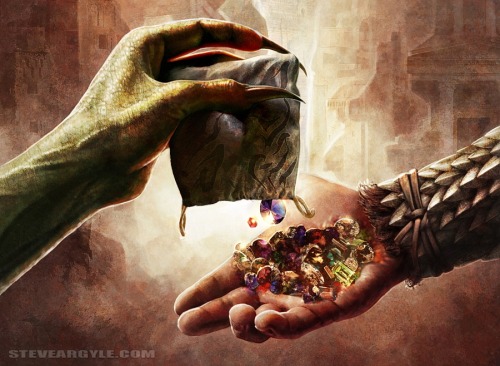 Let me give you a situation that you might not remember having been in.

You’ve been playing Magic for a few weeks. Maybe a friend taught you, maybe you played Duels of the Planeswalkers, maybe you found an intro deck and just liked the art. You feel ready to head to your local game store and you head there, being told that you can rule at FNM, or something to that extent.

I want to share with you some things to watch out for, as a new or experienced player. These are financial pitfalls that can ruin your experience or turn you off from that store for good.

There is no situation that will sour me faster on a store than the practice of collecting the rares after the last round of the draft and then having first place in the draft choose a card. I get what it’s for: a reward for having won, your choice of the cards that were opened. Instead of the best cards in three packs, you’re looking at the best of 24 packs. Seems like a great idea, right? It’s even good training for a high-level draft, where you’re choosing card quality over card value.

If you and a group of friends want to redraft the rares, that’s pretty awesome. You’re playing for something of value without needing to have extra packs. If this is how you and seven friends want to draft three times out of two boxes, more power to you.

At the store level, though, there are real problems with a rare redraft. One, it feels terrible to open a sweet card and know that you’re not going to be able to keep it. Imagine that you’ve had a bad two packs of a draft. You misread signals, you opened poorly, someone in front of you changed colors, etc. It happens to all of us. Then in pack 3 of Khans, there it is, a foil fetchland. Congratulations! You view tonight as a win.

With a redraft, though, there is little chance that you’re going to hang on to that foil. Unless you do something sneaky, like take it out of circulation. Draft the card, hide it in a deck box, and don’t tell anyone. They’ll notice at the end of the draft that something is wrong, and that’s the second issue with redrafting: I’ve rarely seen it work where 8 players put up 24 rares. With the foil fetch example, what’s to stop me from swapping in a Clever Impersonator out of my binder once the time comes?

It’s especially egregious to have a redraft in place of prize packs. Stores get excellent prices on their packs, about half retail price for the most part. Stores that charge you $12 to draft and give a redraft as the prize are shorting you on value and experience.

True story: I went to a game store six months ago and was seeking to sell a Gaea’s Cradle. It had a retail price of about $120 then. I went into the store, which I had drafted at before, and they had a tablet set up displaying their buylist. I could browse what prices they gave without troubling a clerk. I picked out a few things and told the clerk I wanted cash, not credit.

“The price on there is the credit price. We give half of that credit if you want cash.” So I got offered $35 cash on a Gaea’s Cradle.

Needless to say, I haven’t been back there.

Stay away from stores that are trying to make too much money off of individual transactions. It’s just bad business and it’s going to leave you feeling angry that you were taken advantage of in such a way. Not getting full retail for your cards is a part of the game, but getting dimes on the dollar is just too much.

There are some remarkably awful places to play Magic. I’ve been in stores where neither side of a table had room to get in and out, but instead each player had to pull the table to them, in order to let someone else out. I’ve done a draft in a store that had room for exactly eight players, and anyone extra was going to play outside. Heaven help me, I’ve played PTQs in the cheapest, flimsiest of IKEA chairs.

My wife wins, though. She visited her parents in upstate New York, and for fun, went to an FNM draft. This place, in October, had drafts occurring in an open garage, around a high table with no chairs. She was the only one who brought sleeves!

If you encounter a store that can’t bother to have a place to let you play, don’t give them your money.

On a related note: Don’t stay one minute if anyone ever talks to you about table fees.

This is less of an issue than it used to be, I hope. I learned to play at stores that tolerated Magic, but who felt in their heart of hearts that everything should be comics or miniatures. I knew, for a fact, that Magic made them more money but they didn’t like having to learn a new game or depend on something they didn’t understand.

So they didn’t bother.

This would lead to store owners who didn’t care, or worse, let some constantly-present customer take over. I know the era of ‘I don’t work here, but I get treated like I do’ isn’t over and that’s a shame, because that can be bad for business.

Perhaps the worst is when a buddy of the owner decides he doesn’t have to play by any rules, and the owner allows it. That store won’t be around long and you should plan for their going-out-of-business sale.

If you’re a high-volume trader, seller, or speculator, you might do a lot of business with one store, building a relationship with them over time. This is usually beneficial for you, for them, and for the other players at the store who get access to more cards that they want.

Such things can sour, though, if there’s preferential treatment or awful behavior going on. If the guy who ‘runs’ the card case at a store decides he’s only going to play with Ice Age lands and no sleeves, and the owner does nothing, no one else will play!

Finally, I want to bring up stores that don’t seem to know about the Internet. Sure, a brick-and-mortar store can have a small increase in price over a card’s price online, that’s part of the price you pay for getting the card immediately. If you need it fast, it’ll cost you more. (This is why Containment Priest was $50 on the GP New Jersey floor the morning of the event)

Some stores, though, never catch up. It’s understandable if they get bought out of a card before they found out about a card spiking (maybe they need to become ProTraders!) but I’ve been to more than a few stores that bought at the new price, and then tried to sell it at an even higher price!

Buying singles is generally the way to go. Buying packs and hoping to crack the value is usually not going to give you a return on your investment. Singles, though, are only worth it if the stores aren’t trying to make up for their mistake when buying.

I hope you found some of these tips helpful when you’re choosing a store to play at.

And if you have some ‘awful store’ stories, I’d love to hear them, in the comments or tweet me @WordOfCommander

ADVERTISEMENT: MTG cards storages are simply boring these days, why settle for the usual holiday gift box or the fat pack box? Get the Grimoire Deck Box and store your prized collection with the best best in class storage