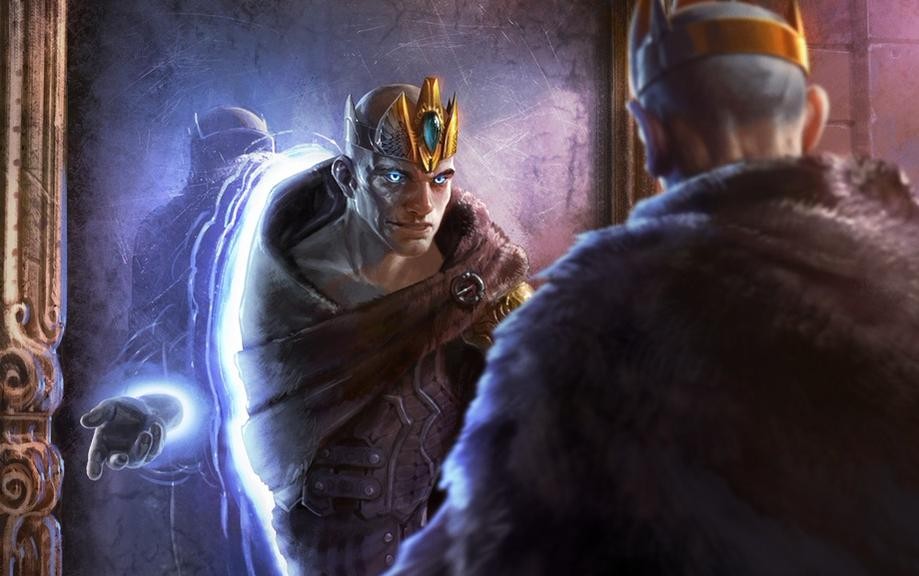 At GP San Jose last weekend, I took some time away from going 3-3 and talked to some of the vendors present. This being the beginning of the new set, I was curious what they were experiencing. I asked everyone the same set of questions, and while some vendors didn’t have much to say, I found them to be very helpful and incredibly well-informed.

I tried my best to approach when business was at its slowest, usually mid-round. I did notice that if you go in to do some major selling, you want to do that when everyone else is playing. More than one vendor had serious haggling going on because they had no other customers at that moment.

So let’s dive into the vendor’s-eye-view!

What was selling well?

There were two categories that were selling well: Modern staple cards like Tarmogoyf, Dark Confidant, Thoughtseize, Liliana of the Veil, etc. and Ugin, the Spirit Dragon’s alternate art. The vendors I talked to consistently reported that since this was a Limited Grand Prix, they weren’t expecting to do as much business in the staples of Constructed. One vendor reported selling more than 40 Drown in Sorrow at $2 each just before GP Denver. That’s never going to happen at a Limited event.

What does happen, though, is that vendors are able to target artists’ cards for the events that are coming up. Having a section for each artist (and then going and getting the card signed) was said to increase sales of such cards in a real way.

In talking with vendors, there’s a lot of varying opinion on reprints in Modern Masters 2015. If Dark Confidant and Tarmogoyf are there again, those values will take a hit, but not too big. If they aren’t reprinted, the prices will go very high…which is what Modern Masters is trying to keep in check.

Everyone understands that reprints are coming, and it’s rare to have a big stock of anything just sitting and waiting. Keep in mind that vendors are people too, and not above the occasional speculative buying spree.

What were vendors buying a lot of?

There was one card on everyone’s mind: Tasigur, the Golden Fang. Even though we were at a Limited Grand Prix, word filtered around quickly that Mr. Banana was putting up results across formats, and vendors were picking him up for $8 cash. No one had offered more by the end of Saturday.

This is important to note: Please don’t think that vendors aren’t up-to-speed on prices and trends. Often, you’ll see buy prices written on a dry-erase board, simply because those prices change over the course of a weekend or even a day. Even if a vendor isn’t on Twitter for every hour of every day, all it takes is two people in a row asking for the same things to get the antennae up and investigate.

Snapcaster Mage was a card cited as due for growth, and buy prices were creeping upward. Since he’s not going to be in MM2015, you might have room to make a profit now if you buy in at his current tag of about $35, he seems a good bet to hit $50 before next summer.

Several other merchants mentioned that things were in line with their expectations, especially at a Limited GP. For people who make a living buying and selling, it’s nice to have things go the way you believed they would.

What prices were most in flux?

Liliana of the Veil was creeping upward, and even Steve Argyle was said to be buying them for $65, just so he could alter them. She’s too new to be in MM2015, and the foil versions being given out at Regional PTQs is not scaring people away.

The alternate art of Ugin, the Spirit Dragon kept getting increased, on the buylist and on the retail, and it didn’t stop people from buying this up. There’s a level of perceived scarcity at work, and even though it’s not foil, it’s still gorgeous. The other cards from the Ugin packs are worth nearly nothing, so don’t expect a premium to be attached there.

These promo editions are having semi-predictable effects. Liliana’s promo version isn’t budging her price, but Griselbrand’s GP foil has kept that card under $20. It’ll be interesting to compare where these all end up.

One vendor reported that Omniscience was getting bought up at $12, and that’s a card which is overdue for a spike, considering its power level in Legacy and casual formats.

What other surprises were present?

The vendors I talked to were pleasantly surprised at the demand for the oldest cards. Not just duals or Power, but there were several who mentioned that they had moved a lot of Alpha/Beta/Unlimited cards which had been in stock forever.

You may have heard about Tiny Leaders, and its effect on some prices, but there’s a lesser-known format called 93/94 that requires you to have cards from only the original expansions up to Fallen Empires. These niche formats will never have to be too big to affect prices, because Alpha cards are getting more and more scarce due to collectors anyway, but this format offers a unique combination of rarity and fun. If it gets big, expect the oldest cards to get even more valuable.

There were more than a few Europeans selling Power in order to take advantage of the exchange rate right now. It’s not clear how much Power has gone overseas over the years, but the allure to cash out is a powerful one.

What effect did the recent Banned/Restricted list have on these vendors?

None of the vendors I talked to had a big position on the cards which got banned, no one had a stack of Russian Foil Treasure Cruise or anything. Mostly, they saw it coming, even though some felt that the format had not yet been given time to adapt. It seemed to be a banning due to the number of people playing it, not necessarily the card’s power. Why fight it with Rest in Peace when you can cast the Cruise?

All of them were happy to be picking up Birthing Pod at a low price, due to its power in Commander. Lots of Pod foils have also been injected into the market as a result of the banning, since Pod was a deck people had been playing for years there were lots of players who foiled it out. Multiple vendors pointed to Linvala, Keeper of Silence foils as one that was declining in price.

For the individual, if you’ve wanted that foil Kiki-Jiki, Mirror Breaker, the time may be now. Twin decks might have a great chance to come back and crank those prices up.

Has Legacy grown, compared to a year ago?

Interestingly, even vendors who aren’t based in an area with a big Legacy scene have increased their Legacy business online. More than one vendor had players selling out of Modern and switching to Legacy, simply from faith in a more stable environment. You may hate the Reserved List, but it’s respected as a promise to players.

Commander and other casual formats are unlikely to see such major shifts. Movement on that front is often murky, not many saw the Trade Secrets ban coming.

Vendors are happy to pick up the non-blue dual lands, simply in anticipation. It doesn’t matter that Plateau isn’t big yet, because it’s extremely unlikely to go lower in price. Nowhere to go but up!

Cards that they can’t keep in stock

This was alternate-art Ugin’s party. As mentioned, the buy and sell prices just kept climbing through the weekend and they are going higher still this week. At this point, I’m not sure if it’s from actual demand or from speculative purchases.

Berserk was also in high demand this weekend, as befits one of the best spells in Tiny Leaders. It’s a high cost to get in on this card, but if you’ve thought about getting one, now is the time as demand starts to drive the price higher and higher.

The future of foil Treasue Cruise was predicted to mirror foil Mental Misstep by one vendor. I’m not sure I agree with the scarcity, since it’s third-set uncommon vs. big-set common, but vendors were still buying foil Cruise at around $3, just on value. Drawing three cards for a single mana, Delve or not, is always going to be good.

Mindslaver was mentioned as a ‘vendor spec’ in that one vendor was buying the stock of other vendors. It’s a candidate for MM2015, it’s been in two sets already, and it’s barely $4. I don’t see how it’ll take off, unless a new supply of Academy Ruins soon makes that combo more of a presence.

Vendors are waiting to see if Tron decks replace Ugin with Karn. It’s not clear if the extra mana is going to be a huge difference, because the ability to play Ugin and then exile just about everything is awfully appealing. If Ugin becomes the new card to rap towards, expect his price to gain significantly.

While Valorous Stance has been pointed out as a card with an amazing set of modes, note that point removal (outside Standard) is much, much better. Path to Exile is one less and ignores the protection mode of Stance. Keep this in mind when you’re considering buying a foil for $10 each.

I’d like to thank Damyan Brunson of Tier 1 Games, Dustin Ochoa of Amazing MTG, Ben Huang of Gray Ogre Games, Michael Lim of Battle City Games, Jordan Woo of Magic Stronghold, Kyle Lopez of Aether Games, and Jameson Reeves of MTG Card Market. All of these vendors were kind enough to take a little time and talk to me while other players clamored to buy and sell.

One thought on “The Vendor’s Views”