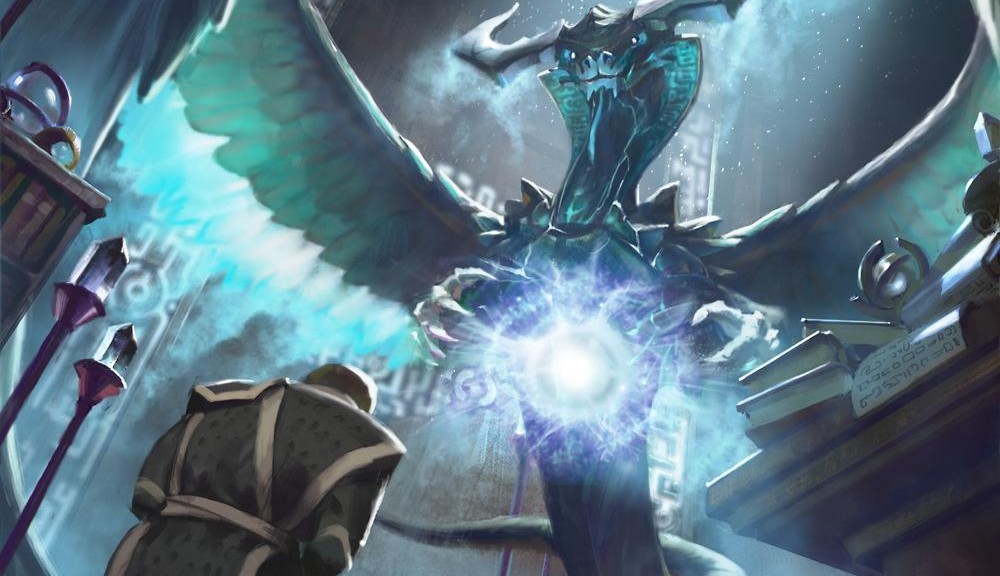 A Pro Tour is in the books and I’m not going to regale you with tales of cards spiking out of nowhere.

In fact, if I could, I try to pull you away from such a quest. There’s a lot more to be made in the search for stability than the excitement of being in the middle of a spike.

Trying to ride the surge of a card is a terrible, terrible idea. It is fraught with pitfalls and problems, and you’re rarely going to make much.

Let’s get into an example.

Putting two decks into the top 16, a lot of words have been written about this little artifact. It’s been the turd in the punchbowl when it comes to opening Worldwake packs for a while, and buying a pack for $20-$30 and seeing this as your foil rare will just make you cry.

Then again, if you’re wasting money on buying random, old, box-mapped loose packs, you should be crying more. But I digress. 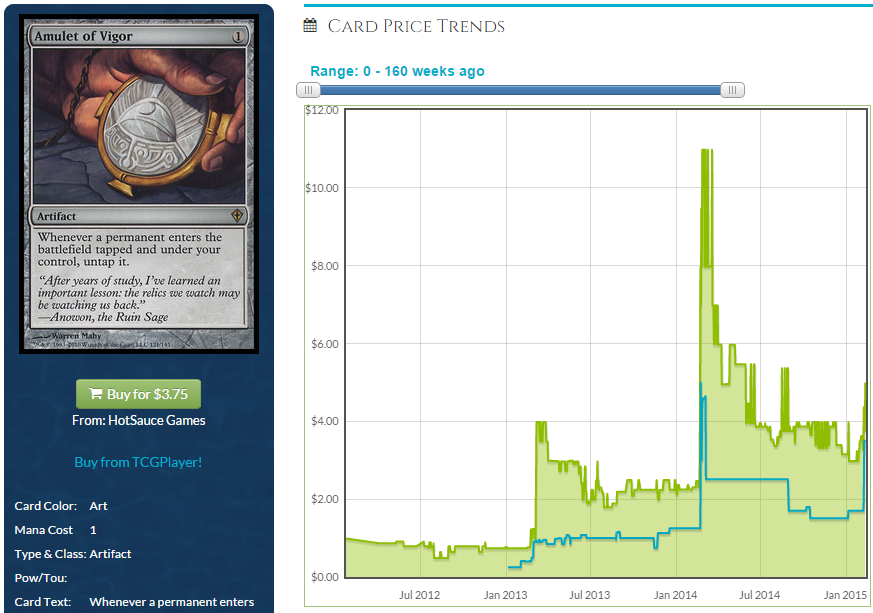 Amulet has two spikes that you can see on the graph. It’s also got a lot of falling. To make money on this card during the spike, you needed to be among the first to buy it so that you can get it sold ASAP. That’s one of the big issues with buying cards mid-spike. If they aren’t in hand, you can get very burned.

Did you order your cards that Thursday or Friday night? If you’re lucky, and spent extra on shipping, you’ll have them in hand for the beginning of next week. Then you get to send them out again.

Especially once shipping and fees are taken into account, it’s very difficult to acquire and then resell cards during the spike of an event. So how are we to make money?

Primarily, you’re trying to acquire value. You’re buying the cards from a website/vendor before they have a chance to adjust their prices upward. Hopefully, this means you pick up Azusa at a price under $30, when she’s now closer to $40.

What you’ll be trying to do is resell or trade the card at the new value, having only spent a fraction of that value in cash. This will likely rule out buylisting, unless the card settles at a new price more than double the old price. Vendors and stores are slow to raise their buylists, especially online.

Why are they slow to raise their buylist prices?

Scion of the Ur-Dragon is why. If you’ve been following this card, you’ve seen it take a huge rise in price…and then a large fall. It turns out that the pool of people who need a new EDH general is relatively small.

I told you a month ago it was a good buy at $2. It spiked up into the $20 range, and now it’s settling in around $10. Buylists, though, have it for under $5, except for one vendor. Stores and vendors do not want to get caught buying into the hype. They are content to sell into it and wait for the price to settle before getting more.

You want to be very, very cautious about buying a card that has started to rise. Sure, if you can get in at the early price, that’s fantastic. But if you’re buying Scion when it’s already gone up to $10, then your margins are significantly smaller.

Also, there’s the problem of sellers who don’t ship. This is more of a problem when there’s a Banned/Restricted announcement, but if the announcement happens and you’ve still got Worldgorger Dragons listed at $3, you’re obligated to send them or face the negative feedback. Some sellers are willing to take a negative hit there in order to get more money for their cards, and if you buy from one seller, then immediately list that card on eBay with a Buy it Now, you’re passing along that obligation while still being responsible.

So what do I think you should do?

First of all, listen to writers and players who you trust. Go with those who have experience, or who explain their thoughts well, or who have been right, or just the ones who you like. Whatever the case may be, that’s telling you what to get while things are still calm.

Do keep in mind, even the best of us are often wrong. If you’re buying things at a good price, the next step is to be patient. Lots of cards have gone up, and some have hit it huge. That is where you’ll make consistent gains in value, with good planning.

Second, when a card is spiking, sell what you have and don’t try to be a hero on getting every single penny. Get your profit and get out. If you hold it too long, you’re running the risk of a letdown, such as what Amulet and Scion have had.

As part of this, keep your collection organized enough that you can find your bulk rares as they become needed. I like to keep my rares separate, but if you can sort your cards by set, then color, then rarity, you’ll find it works well without needing to alphabetize.

Finally, keep track of what you do. It’s possible that you can just remember the values you got cards at, but when it comes to tracking your profits, it’s very useful to know what price you got in at, so you can make a profit without trying to remember all the values.

3 thoughts on “Don’t Try This At Home”