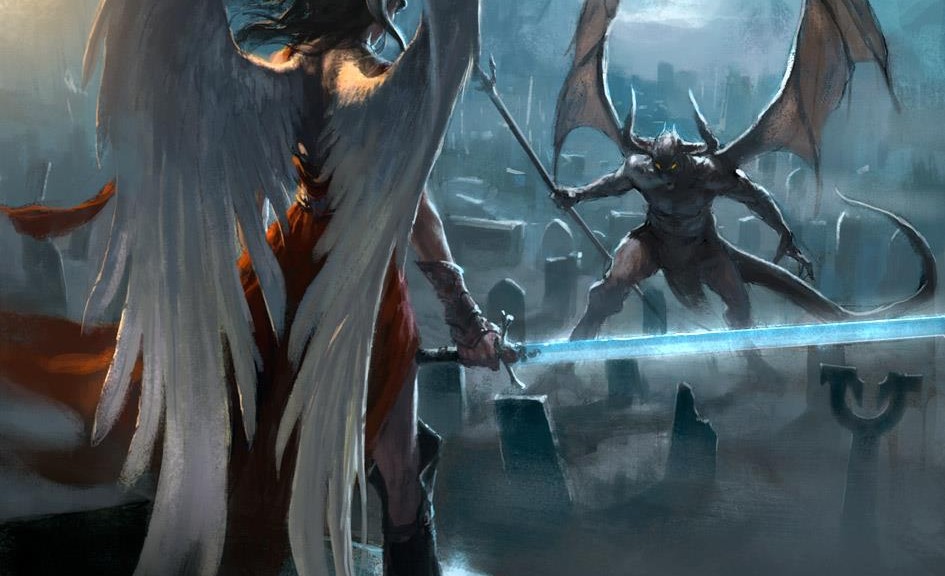 So next week we begin Dragons of Tarkir previews, though it seems like we just finished spoiler season for Fate Reforged.

There’s three premises I want to keep in mind as we leave Khans and enter Dragons:

#1: This is a big set in the spring slot, such as Rise of the Eldrazi or Avacyn Restored, but Sealed and Draft events are still opening some Fate Reforged. Those two sets have had a lot of value in the long term, because they were opened less than big fall sets. Dragons of Tarkir has a very good chance to contain some cards that will go up significantly, due to that reduced volume being opened.

#2: The new rotation schedule means that Dragons of Tarkir will only be Standard legal until fall 2016. This is the first spring set to rotate at a different time than the fall and winter sets of its respective block.

#3: Khans is no longer being opened in Draft or Sealed events, and that tells us it’s time to start picking up Khans cards, now that supply is at its maximum and prices are near their lowest.

With these ideas in mind (point #1 about which Dragons cards to buy will just have to wait three weeks till the full spoiler is out) I want to go over Khans cards that I think have room to grow in about the next six months, or grow even more if they have value outside Standard.

Before anything else, I want to see what recent history has been like for the shocklands. I’m looking to see if they took a hit or even went up since they rotated from Standard. 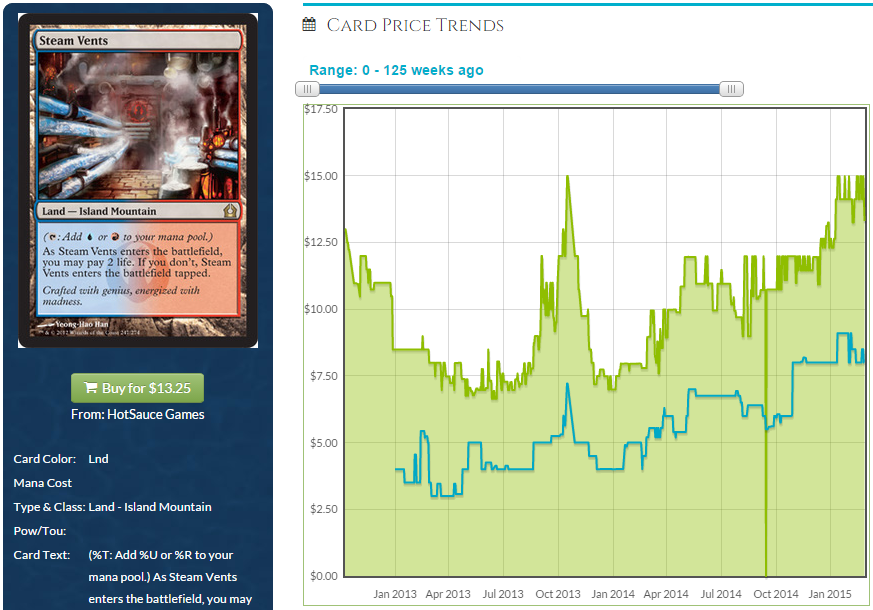 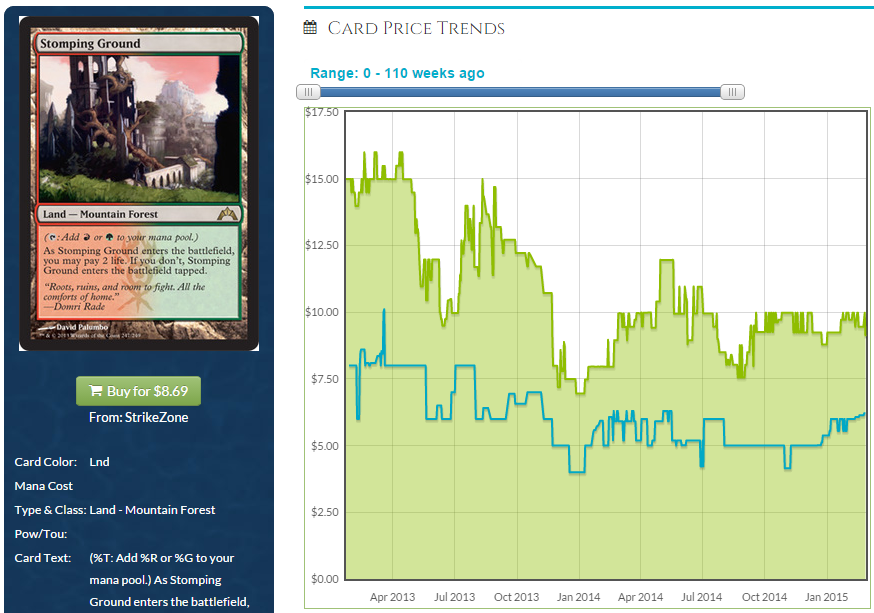 Some fluctuation, and Vents is possibly the most popular shockland in Modern. Blue lands will often be a bit more expensive because blue has been the best color. (Note the price gap from Underground Sea to Plateau!)

So if I’m buying fetches now, I’m seeking pure value. I’m not going to see a big gain in price, but it’ll be excellent trade bait. At worst, fetches aren’t going to go down in price. At best, they begin a steady upward trend, but I think that is rather unlikely for at least a couple of years (going by what the shocks have done).

I am going to bang this drum as loud and as hard as I can for you: buy these now. NOW. Foil shocks gained 20% to 50% within a year of rotating, and getting foil fetches right now will save you money in the long run. These will not take a hit at rotation.

Foil Delta and Strand will not stay under $100 much longer. They are just too good in the Eternal formats. The other three, being $50-$60 right now, are excellent candidates to gain value on a similar track as the foil shocklands did.

If you’re someone who likes to foil out a deck, or likes to have high-end foils, get on the wagon now. You’ll thank me. I want to reiterate this point: I don’t know what the ceiling is, I just know that we are at the floor.

At $6, it’s close to a steal. It’s great in casual token decks, and Zombie decks too. If you wanted to wait, I’d understand, but don’t sleep on its long-term casual appeal.

You might laugh, but this is seeing a tremendous amount of Eternal play. For example, there was a Star City Games Modern open on February 16. There were five decks in the top 16 that ran a full playset of these in the main. Note it’s a nearly-$3 uncommon and a $20 foil. It’s not hard to imagine the foils doubling by the time rotation hits, and not losing any value at rotation, simply due to the number of people playing it in Legacy and Modern.

My colleague James Chillcott bought a foil set of Japanese Swiftspears for $32 at the beginning and sold them at $240. I would not be surprised at all to see the JP foils hit $75 or even $100 in the next year. This is one of the ways that a Burn deck can go from budget to pimp, and you should spend accordingly.

Another card that has lots of room to grow, now that Khans isn’t being opened as much. I like picking up both foils and nonfoils right now, at about $10/$20. I’d be looking to move the nonfoils in the next few months, but the foils could prove to have real legs.

Siege Rhino might be an excellent case study for Cube appeal. If you can manage the mana, this pays you off very well, but not every Cube is designed to have enough fixing for three colors on turn four. Sure, splashing for Fireball and the like is a longtime tradition, but would you splash this? Perhaps the better question is, can you?

With a foil multiplier at about 6x, this has my eye. I’m all for picking these up and just waiting. As I said way back when Khans first came out, this is the best Clone effect ever, depending on how you feel about Phantasmal Image. Picking these up under $20 right now is a steal, because they are going to increase, slowly but surely.

While some vendors I talked to at GP San Jose wanted to be picking these up at buylist prices, there are plenty of larger vendors who are staying away altogether. (For instance, this card is not on ChannelFireball’s buylist.) If I were able to buy these at $3-$5, I would be thinking about it too.

As an individual, though, I’m staying away unless the price absolutely craters at rotation. The nearest example I can find to this card is Mental Misstep. It seems unlikely that a card banned in Modern and Legacy can have a price this high, but everything is keyed in on the price of entry. Did you buy at the lowest? Great! Sock these away for a while.

I’m happy to wait until rotation for these to hit a low, because not enough people will keep this at that time, since it isn’t legal in Modern. It’s still Legacy-approved, though!

Don’t buy this yet…but be thinking about it.

In case you didn’t know, both Khans and Fate Reforged had prereleases where a few foils were stamped with the date of that prerelease. There were 40 in Khans and 30 in Fate Reforged, and it’s not yet clear how many there will be in Dragons of Tarkir’s prerelease packs, if there are any.

These are not quite alternate-art cards, but they represent an additional layer of scarcity. When you find these in random binders, trade for them at the foil price or a little more. Having the rarest version of a card sometimes comes in handy.

All of these are things to consider, now that Khans isn’t being opened. This is different from rotational planning, these are cards that I’m picking up for the longer-term haul.

Next week, we cover this coming summer’s giant money vacuum!