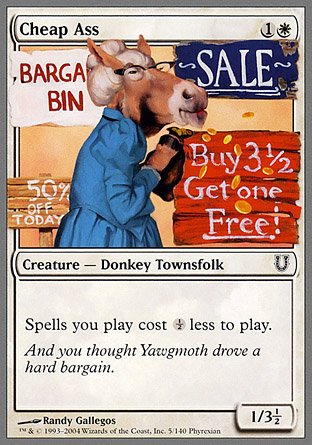 Greetings! Today is a big day for me: my first article on MTGPrice. I am humbled and honored to be part of this top-notch team of some of the best minds in MTG finance.

When I first started writing about MTG finance, I felt woefully inadequate compared to many of my peers, and to some extent, that’s still true. Many of the writers on this site make a living exclusively by buying and selling Magic cards. Others have experience in real-life finance and stock trading. Some are funding their college educations through MTG.

By contrast, my primary goal in MTG finance is just to play for free. That’s it! Sure, every once in a while, I’ll buy in to a card and make some real-life cash profit. Those times are nice, but they’re not frequent, because constant speculating is time-consuming, and most of my free time is taken up by this little dude: 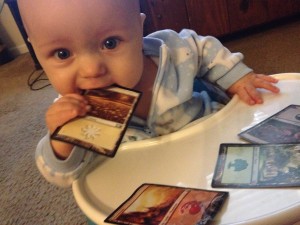 The time I do have outside of my full-time job is precious, and the fact is that constantly buying and selling Magic cards is a pain. Maintaining a large inventory, the daily packaging and shipping of cards, having to travel to large events in far-off locations every single weekend… these things can be rewarding and profitable, but they’re a grind. Could I do it? Maybe. Do I want to? Not in the slightest.

I’ll tell you straight up: the perspective I’m bringing is of someone who worries over when the best time to buy a single copy of a card for my cube is, or maybe a playset for a Constructed deck. My definition of “going deep” on a card is 20 to 30 copies. If you’re a store owner or someone who goes hundreds deep on most speculation targets, I like to think my insights will still be applicable, but  there may be other columnists on this site whose objectives more closely align with yours.  Rather than feeling inadequate compared to those other writers, though, I’m just going to own it: my goals are different than theirs.

Namely, I’m looking to spend as little time as possible on Magic finance so I can spend the most time possible actually playing Magic without spending money to do so. Does that sound similar to what you want? Then we’ll get along just fine. Read on.

If you’re new to Magic: The Gathering, I hate to break it you, but you are going to have to spend a significant amount of money if you want to be competitive in basically any format. I know it’s rough, but unless you’re lucky enough to have inherited an old collection from a family member, you are just going to have to accept that this is an expensive hobby, and it’s at its most expensive of all when you’re just starting out.

Now, you’re currently on a Magic finance website reading an article about playing Magic for free, and that shows that you’re at least interested in mitigating these start-up costs. That’s awesome. Deciding you want to spend as little as possible to get as much as possible out of this hobby is an excellent first step.

I have good news for you new players, and it applies to the established players, too: once you have a decent-sized collection, the world of MTG opens up to you exponentially. Why? Because Magic cards are probably the most liquid, easy-to-sell assets that you own (unless you’re involved in commodities markets or drugs or something). There are buylists all over the internet, many of them featured on MTGPrice, waiting to buy your cards at a moment’s notice. Most adults don’t often work in the barter system, but trades of cards for cards happen every day in every LGS across the world. You can use a service like PucaTrade to turn the cards you have into cards you want from the comfort of your own home, or turn to eBay to try to sell individual cards for a little more than buylist pricing. There are many, many ways to get rid of cards for either cash or different cards.

So once you have a collection, it’s not hard to turn that collection into a specific group of cards you want—for play, for speculation, for collecting, or for chewing on (in my son’s case). Of course, you can only leverage your collection into the exact cards you want if you understand how MTG finance works: how seasonal price patterns work, how rotation works, how Standard pricing works, how eternal format pricing works, how casual formats impact the marketplace, the best ways to out your cards, and more.

That’s why Magic finance matters: because almost anybody can play almost any format with enough knowledge, time, and dedication. There’s no reason you need to resort to less powerful budget decks to get your fun out of this game, but there’s also no reason for you to overspend in acquiring top-tier staples in your favorite format. You just need to develop a couple important attributes.

I can’t stress enough the importance of patience for the finance-inclined player.

It has been literal years since I preordered a card. Yes, occasionally there’s a Bonfire of the Damned or a Sphinx’s Revelation that blows up and makes those who got in early a ton of money, but in the vast majority of cases, cards fall steeply from their preorder prices. If we’re spending as little time as possible on MTG finance, that means just assuming everything in the set will fall and not worrying about the potential of underpriced cards.

Some players collect as much as possible from Standard-legal sets to allow the biggest pool possible when building a deck for FNM or other events. I’ve seen countless players who immediately start acquiring playsets of every card in the new set as soon as it’s available on shelves.

If you’re trying to stretch your MTG dollars to the max, though, you need to stop doing this. Between WOTC’s marketing and best-case-scenario mentality in a large portion of the playerbase, new cards are almost always over-hyped. So few of them end up being competitive staples, and those that do often still end up cheaper than their preorder prices.

Just wait. Observe what’s competitive, figure out what you want to play, and obtain the cards that apply. Picking up cards blindly—especially Standard cards—just because “I might need it someday” is a quick way to end up with a bunch of cards that are dropping in value quickly and don’t have a deck.

If you’re acquiring a card for a casual format like Cube or Commander, there is no reason to ever preorder. In fact, if a card is a Standard-only staple, I tend to not pick it up until it’s rotated. For example, Elspeth, Sun’s Champion could not be more of a staple in Standard, but at a mana cost of six, it will never see play in competitive eternal formats. This means it will drop steeply at rotation, when I will pick a copy for my cube. (Off topic: it was such a missed opportunity to go with “Sun’s Champion” instead of “Champion of the Sun.”)

Now, let me state that it’s absolutely a fair stance to take to pay more for a card because you desperately want to play with it and are willing to pay the extra cost. You also should be playing optimized decks in major tournaments, and if that means overspending on a card, you gotta do what you gotta do. And if you’re speculating on a card, then as a matter of course, you think the price you’re paying is fine and that it’s likely to go up. These are situations where patience doesn’t really apply. But if you’re looking to spend the minimum amount on Magic that still allows you to be competitive or just have a fun-to-play-with collection , it’s the most important attribute you can develop. Wait until a card is at its floor price before buying in. If you need it beforehand, sure, buy it, but until then, there’s no rush.

Speaking  of needs, the second key attribute I’ll be mentioning today is developing a good sense of the concept of wants versus needs. You need to be able to look at that Sower of Temptation foil in your LGS’s display case and say to it, “It’s you I want, but it’s [the non-foil copy] that I need.”

It’s hard to think of two less related things than playing Magic for free and acquiring foils and other high-value cards. This is 100 percent a matter of personal opinion, but to me, there’s no sense in acquiring anything other than the least expensive version of a card to play with (within reason—I’ll pay a little more for an old-bordered version of a card, for example). I believe that it’s easier to have fun with 30 cards worth $30 each than with one card worth $1000, and that’s how I treat my own collection.

Now, I’m not saying you’re not allowed to like foils, and you can even incorporate the acquisition of foils into this whole “playing Magic for free” thing, but you’re almost never going to see me talk about them or advocate buying them. They’re a facet of the market that  I don’t fully understand, appreciate, or even like. My advice is to simply focus on non-foils until you have every card you could ever want to play with and are ready to start upgrading. Until then, high-end cards just don’t make a lot of sense.

And frankly, even if I ever reach the point of owning every card I could possibly want, I’ll just keep my non-foils and spend that extra money on things unrelated to Magic, thank you. That is allowed, you know. 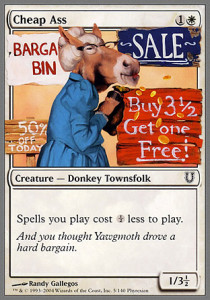 Again, I’m looking forward to being here at MTGPrice for the foreseeable future, and I’d love to hear your feedback on both what I’ve written already and what you’d like to see me write moving forward. Always feel free to leave a comment below or reach out to me on Twitter at @dbro37.  See you next week!

8 thoughts on “So You Want to Play Magic for Free?”