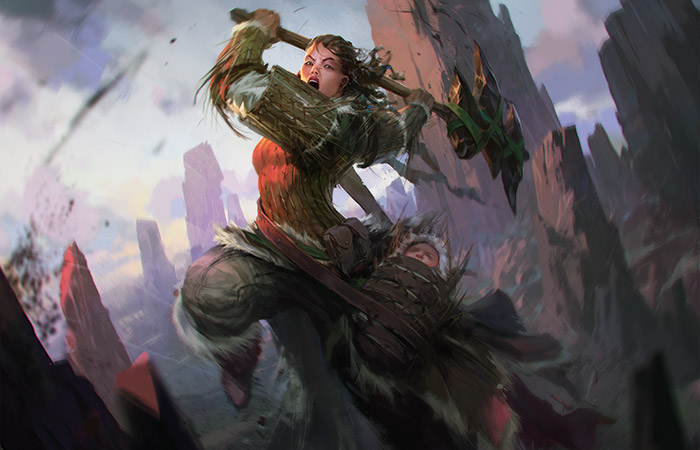 Heading into the Top 8 the cards to watch are See The Unwritten, Dragonlord Silumgar, Silumgar, The Drifting Death, Whisperwood Elemental, and Dragonlord Atarka as cards that can see further gains if they reach the Finals.

12:30 pm: Seth Manfield (Atarka Abzan) vs. Shota Yasooka (UB Control). Yasooka easily establishes control and takes Game 1. In Game 2 Dragonlord Silumgar steals an important Siege Rhino. Manfield tries get it back with Atarka, but runs up against a Silumgar’s Scorn cast as Counterspell and Yasooka takes over again to put himself into the Top 8 with our 2nd UB Control deck.

11:35 am: Strasky closes out his match putting See the Unwritten into the Top 8 for sure. Expecting a bump on this card toward $5 if he wins with it Sunday.

11:16 am: Eric Froelich (Jeskai Tokens) vs. Adrian Sullivan (U/B Control). I’m really liking Jeskai Ascendancy as a pickup later this summer under $2. Sullivan uses Ugin to clean up Game 1. Froelich has trouble with land flood, allowing Sullivan to take Game 2 and qualify for his first Pro Tour Top 8 in a 20 year career in the game.

11:13 am: Willy Edel breaks down his Sultai whip deck splashing Dragonlord Atarka, a card that seems likely to push up towards $20 exiting this weekend.

10:22 am: Martin Dang (RG Aggro) vs. Ondrej Strasky (Atarka Unwritten). Dang puts the slower deck away in quick order Game 1. Strasky stabilizes in Game 2 with Whisperwood Elemental. Strasky wins the match off of a strong See the Unwritten to put him out of range of the low casting cost aggro deck.

10:18am: Manfield (Abzan Atarka) vs. Andrea Mengucci (Abzan Control): Manfield continues his quest to conquer the Italian players this weekend.

10:10am: Samuel Black (RG Bees) vs. PVD (Esper Dragon Control): This is a key matchup this weekend with the control deck favored. An early Ojutai from Da Rosa is backed up by Silumgar’s Scorn and Silumgar the Drifting Death to dominate Game 1. PVD gets Ojutai and both Silumgars in play in Game 2 to totally destroy Sam Black.

9:53am: Patrick Dickmann on Deck Tech #2 today. Jeskai Dragons!  Anger of the Gods (2), Valorous Stance, Aether Spouts (1) main deck. Leverages Draconic Roar, Silumgar’s Scorn and Haven of the Spirit Dragon with Thunderbreak Regent (4), Dragonlord Ojuatai (3), Icefall Regent (2) and Stormbreath Dragon (1). This is special to me since I built this deck 2 weeks ago and am running it in Standard. Dickmann is undefeated with the deck so far.

9:11am: Seth Manfield (Abzan Atarka) vs Marco Cammilluzzi (Abzan Control): 2 copies of Atarka define the Manfield deck. The card is everywhere this weekend and selling briskly. Elspeth once again doing work on camera here in Game 3. Manfield advances to 10-2-1 winning the match with his unique Abzan build.

9:04 am: Joel Larsson (RG Dragons) vs. Rick Lee (Abzan Aggro). Deathmist Raptor showing up again here, this time in the Abzan Aggro deck. Players head to Game 3 with one game a piece.  Dromoka’s Command doing good work against Larsson in Game 3 and Lee takes the game for the match win.

8:37 am: Dech Tech: Ondrej Strasky is featuring Atarka Combo (G/R Devotion). Deck starts with the Elvish Mystic, Sylvan Caryatid, Rattleclaw Mystic and Courser of Kruphix.  Mid-range threats include Polukranos, Whisperwood Elemental as 4-ofs, and Surrak, Hunt Caller and Boon Satyr as 2-ofs. See the Unwritten and Dragonlord Atarka as 4-ofs at the top end. Deck is 5-1 so far, and Ondrej is 10-2 so far.

8:15 am: Marco Cammilluzzi (Abzan Control) vs. Andrea Mengucci (Abzan Control): The Italian players take a game each off camera and we join them in a tight Game 3. This game likely to be decided based on who can stick an Ugin to trump any Elspeth, Sun’s Champion that might make it into play.

8:08 am: In Game 2 Cuneo gets down a Dragonlord Ojutai and throws off the danger of a Rending Volley from Cohen using Valorous Stance. Cuneo manages to fend off all further threat with control answers and puts Cohen down with ease and takes the match.

7:46 am: Justin Cohen (Red-Green Bees) vs Andrew Cuneo (White-Blue Control): Cohen’s tech includes the ability to use Roast or Chandra, Pyromaster against his own Hornet Nest to create a pile of early bees. Stormbreath Dragon, Whisperwood Elemental, Courser of Kruphix and Chord of Calling are additional notables. The Cuneo control deck is running many of the usual suspects including a host of counterspells, End Hostilities and Dig Through Time, as well as Secure the Wastes to hold off aggro decks in the early turns. Elspeth, Sun’s Champion is running the game for Cuneo, further proving her continued value in Standard.

Pro Tour Dragons of Tarkir has thus far been everything we could want in a pro level tournament, with a plethora of interesting new decks and a ton of drama. The metagame on Day 1 in Standard has advanced the possibilities for new and renewed strategies including Red/Green Bees, Bant Dragons, Jeskai Ascendancy Combo and Strength of the Fallen Devotion. Here’s our coverage of Day 1 so you can get caught up.

So far the stand out spec has been the run up of multi-purpose Dragons of Tarkir rare Den Protector. which has spiked from $1.50 to $4.00 within the last 24 hours.

Now after 3 rounds of Khans block draft, the stage is set for 5 more rounds of Standard to figure out our Top 8 players and decks.