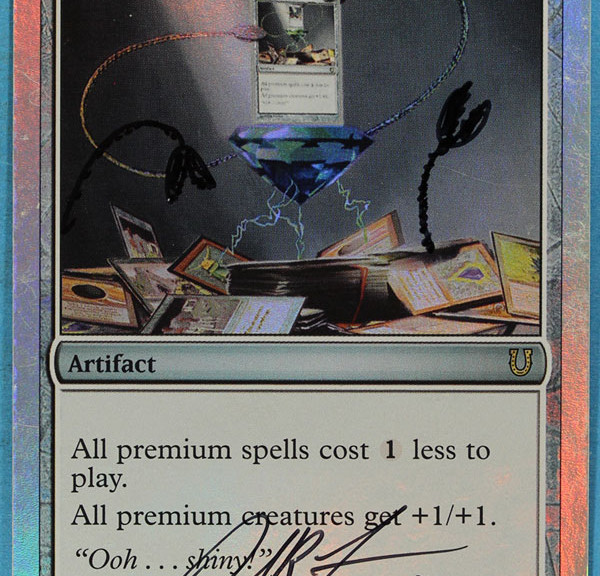 I’ve got a confession to make: I don’t really like foils all that much. Their tendency to bend and become clouded causes me to be extra cautious when handling them. Horror stories haunt me—the ones where players are disqualified for having only certain identifiable cards as foils in their decks. Not to mention nonfoil copies do the exact same things as foil copies in a game of Magic (well, placing Super Secret Tech aside).

So why am I dedicating an entire article to foils in MTG finance? Because the more the game evolves, the more critical it is to include foils in any robust MTG portfolio. To do otherwise could have some detrimental effects.

Allow me to explain…

One significant case for speculating on foils is that they have seemingly limitless upside potential. While this is a bit of hyperbole, there is at least a hint of truth to the statement, especially when it comes to older foils. Something as common as Daze can flounder around the $4 mark for years and years. Yet in 2014, foil copies of the oft-free Counterspell finally cracked the $100 mark. Would that be a sensible price ceiling? You may think so, but the card has still continued its climb! 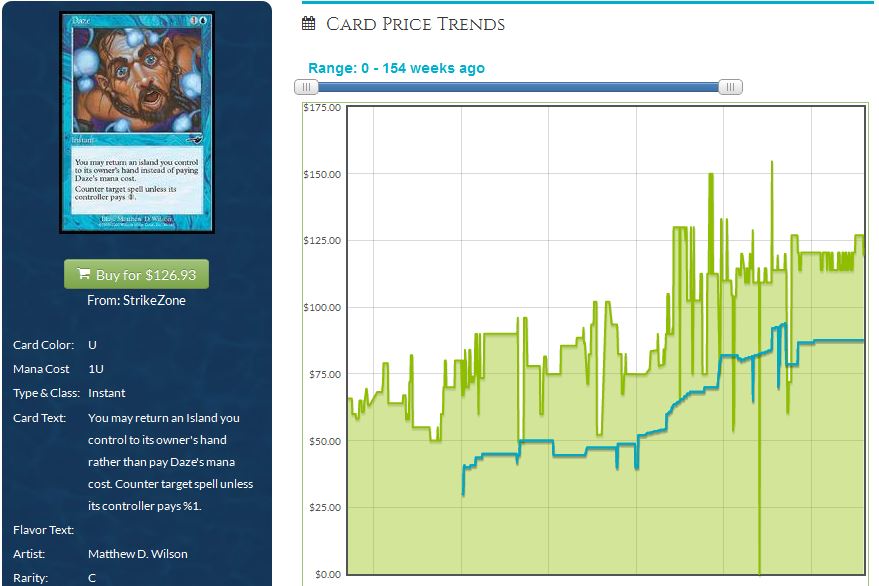 With a $4 price tag for nonfoils and $126 for foils, we’re talking about a multiplier of 31. How about that for potential upside!

Another point in favor of foil investing is that they often hold their value really well, even in the face of reprints.

Consider a recent example: the Magic 2015 reprint of Urborb, Tomb of Yawgmoth. When this card was spoiled in a core set, the Planar Chaos nonfoil version promptly tanked from $40 to $10—a full 75 percent drop in about a month’s time! 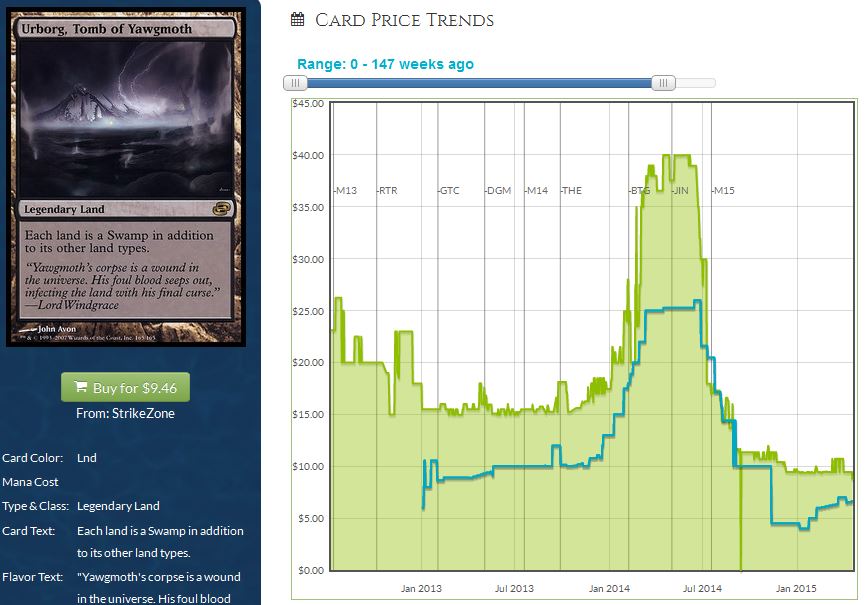 The original foil copies, however, have yet to blink an eye. In fact even the release of a foil reprint in the FTV: Realms set still did not punish this card’s price (though I’ll admit upside is limited significantly as a result of both these reprints). 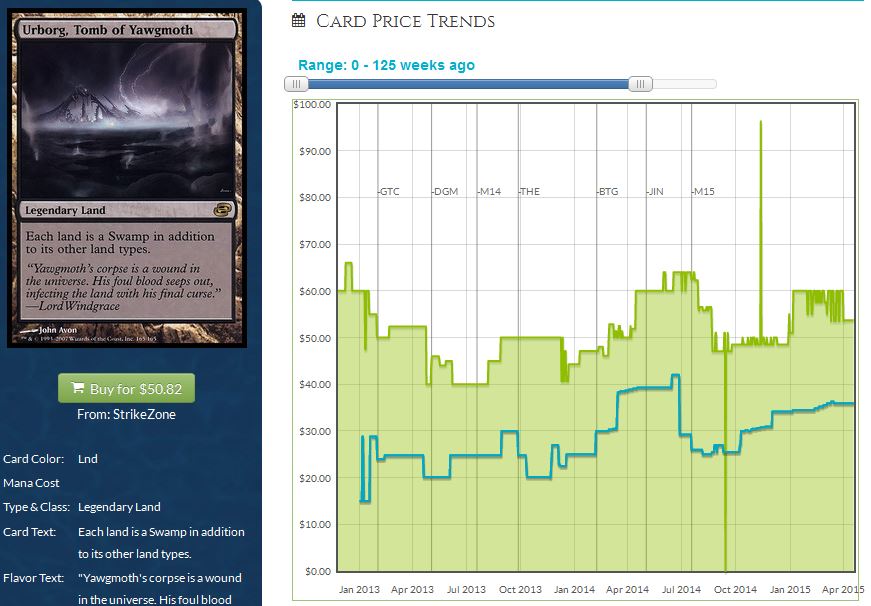 Still, the point is clear. While nonfoil Planar Chaos copies were dropping 75 percent, foil copies dropped about 30 percent in that same timeframe (not to mention that the card’s price has promptly recovered to near its pre-reprint high in the time since!). This is yet another compelling reason to include foils in a Magic portfolio, especially in light of the nonstop reprints we’ve been facing recently!

The last benefit of foil speculation I want to touch upon has a more somber rationale. Namely, I want to talk about the recent explosion of counterfeits.

A little over a year ago, Chas Andres wrote a terrific piece on reprints and their detection over at StarCityGames.com. Others have also discussed this subject at length. What I particularly like about Chas’s article from January 2014 is that he lists all the cards of which we need to be most scrupulous due to counterfeits. He also included a picture to show what some of the counterfeits look like. 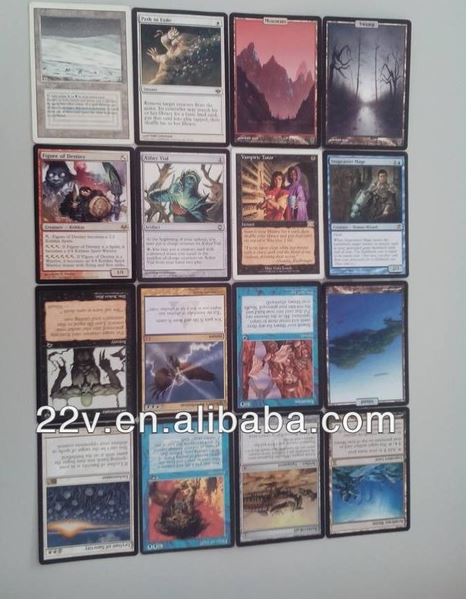 I’m sure by now you know where I’m going with this. I see no foils in the picture above nor do I read any mention of foils in Chas’s article.

Does that mean zero foil counterfeits exist? Absolutely not! I know there are methods of dissecting a foil card, removing a foil layer, and applying it to other cards. But I never hear concerns about such a counterfeiting process becoming rampant. Perhaps the procedure is far too tedious. Perhaps the finished fakes don’t look nearly convincing enough. Or perhaps it’s just plain easier to dodge authorities by sticking with nonfoils. Either way, the fact that you read less about foil counterfeits than nonfoil is definitely a consideration I take seriously.

So Just Buy All Foils?

By now I’m hopeful I’ve convinced you to at least consider picking up some foils to round out your MTG portfolio. If you’ve been hesitant in the past like I have, perhaps the case studies above help you gain some confidence in the endeavor. The data is certainly compelling.

We must proceed with caution, however, because while there are certainly ample positives to foil speculation, there are also a number of real downsides. I would be remiss in my writing if I left these out.

These concerns are not negligible, and we need to take them into consideration. In fact, these very concerns are what lead me to encourage a diverse approach to MTG investing. In other words, I’m not advocating a portfolio of only foils—I’m merely stressing the importance of including foils in your broader portfolio.

In no way am I encouraging a foil-only portfolio!

So How Do I Proceed?

Not every speculation target should be acquired in foil. Oftentimes foils are actually terrible targets. Cards played strictly in Standard are awful to acquire in foil because there’s often a very low multiplier for such cards. Sometimes when a card is reprinted in foil, previous foil copies develop a lower price ceiling, as we saw with Urborg, Tomb of Yawgmoth.

And consider one of the most painful foil reprints I’m aware of: the FTV: 20 reprint of Jace, the Mind Sculptor. When that card was reprinted in August 2013, both foil and nonfoil copies got absolutely crushed by about 50 percent. Suffering a loss of $100 on the nonfoils was a bad beat, but those who watched their foil copies drop from $1300 to under $600 suffered one of the worst value declines in the history of Magic. 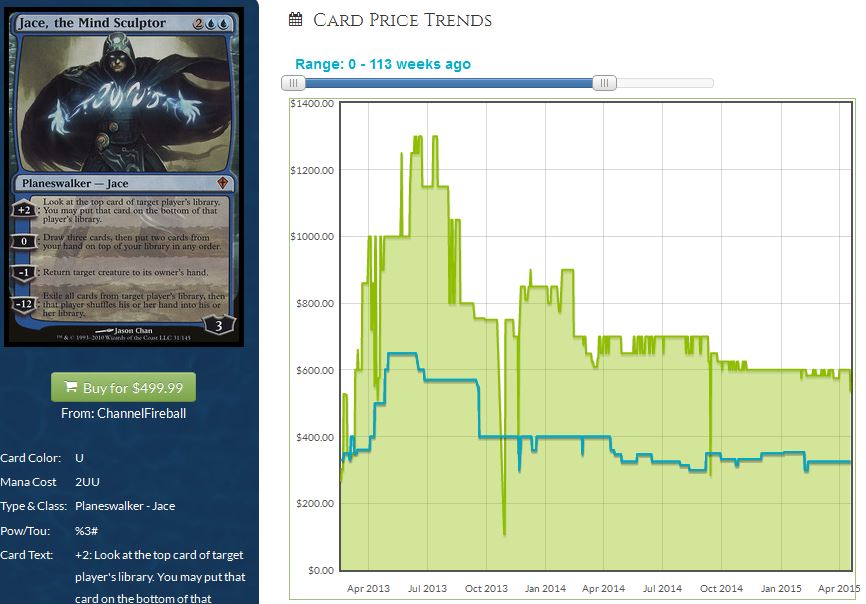 My intent in showing this data point is not to discourage you from foil investing, although you may fee compelled to do so. I’m merely emphasizing that foil investing, like anything else, merits consideration and strategy. One simply can’t buy any foil and expect immediate profit.

How do you go about choosing which foils to invest in? I’ve got a couple suggestions, for starters, and I’m certain there are financial experts who specialize in this area. Jason Alt, for one, has a valuable perspective since he’s so well-versed in EDH—a popular format for foils. Legacy and Vintage experts could also share insights into this matter.

While I don’t claim to be a world-renowned expert in any single format—not even close—I believe I have enough experience to at least recommend a few targets myself. Please take these in stride, and remember to do your own research before committing cash to an investment. 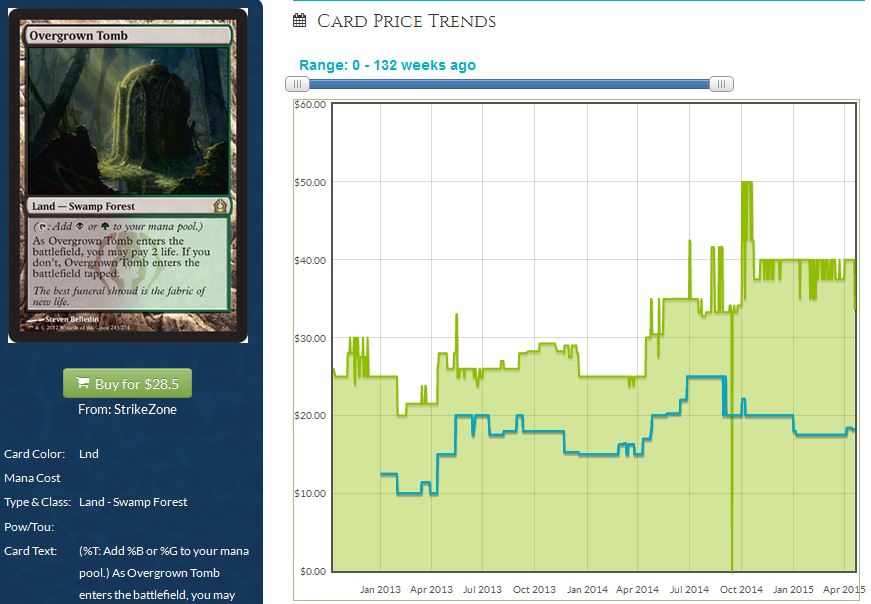 It’s true that shock lands have not paid out the way many speculators expected, myself included. I continue to sit on superfluous copies of the Modern staples, waiting patiently for any sort of price appreciation. It’s been a difficult wait and I’m losing patience very rapidly.

Foil shock lands,  particularly from Return to Ravnica block, have not yielded such underwhelming returns. Consider the chart on foil Overgrown Tomb, the second most played shock land in Modern (after Steam Vents).

No one is going to pay off their mortgage by sitting on foil copies of this card. On the other hand, it’s difficult to ignore the upward trend. I cannot emphasize this next point enough: while the nonfoil copy of Overgrown Tomb is nearing an all-time low, foil copies have appreciated from $25 to $40. So not only are foil copies increasing in price, the multiplier is also increasing. This is a great scenario, because should the nonfoils ever catch a break and go higher, the foil counterpart will jump even more.

Foil shock lands from RTR block are a solid place to have investments right now, and I’m glad I have one copy of each. These should see solid appreciation going forward, as long as they dodge further reprint, and that seems unlikely for now because nonfoil shocks have become so inexpensive—Wizards of the Coast has bigger fish to fry when it comes to reprints. 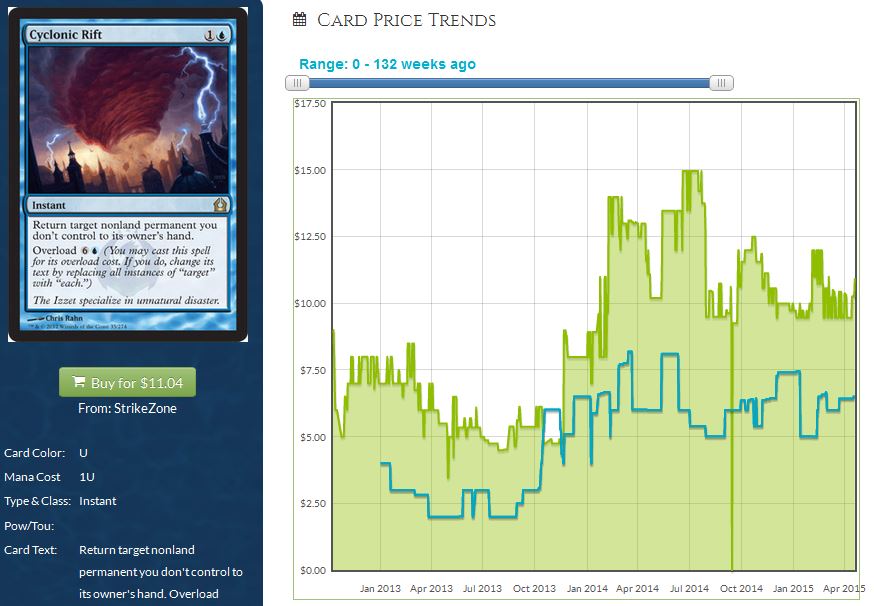 The blue instant is everywhere in EDH. Despite being reprinted in Commander 2014, nonfoil copies have maintained a $3 price tag, and they’ve inched up a bit in value lately.

At $10, we’re looking at around a multiplier of three for foils. While this isn’t necessarily screaming “opportunity,” I still really like picking up foil copies in this price range. Assuming the card isn’t banned from EDH, we can expect nothing but upside from foils. It may take time, but these will inevitably climb higher. Only a reprint could undermine this investment, and being so recently printed and reprinted, I can’t imagine we see these again soon. And even if they show up in every Commander set going forward, so what? Arsenal aside, Commander sets aren’t foil! 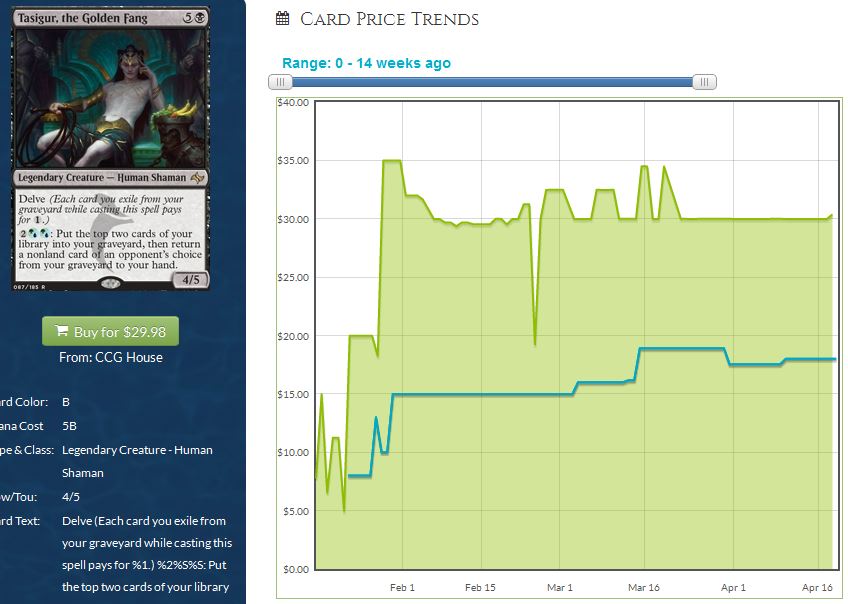 My favorite foil target today is Tasigur, the Golden Fang. I’ve become increasingly vocal about this target because I continue to hear buzz on how good this creature is in Legacy. He’ll never be a four-of, but he has certainly earned his status as “Legacy-playable card.” In fact, one copy even showed up in last weekend’s Grand Prix Kyoto’s Top 8, played by Yousuke Morinaga.

I’ve been acquiring a few foils with cash in the $25 range. And while I don’t intend to drop thousands into this investment, I really like the upside potential of a virtual one-mana 4/5 creature in Legacy. He’s even better in Modern, I hear.

Foils are an unnecessary evil. I don’t like handling them, I don’t like playing them, and I don’t like having to unload them. But I can’t argue with the benefits of speculating on foils. Something like Tasigur, the Golden Fang has only so much upside when it comes to nonfoil copies. I could see them hitting $10 eventually, for example. But with foils, I see so much more potential! And while I’m waiting for these gains, I don’t have to worry about potential Event Deck reprints. No foils there!

All I recommend is that you consider holding a spot in your MTG portfolio for foils. If you’re unsure which targets are best, ask around. The MTGPrice forums are a great place to make inquiries because many of the site’s writers read through the threads there and share their thoughts. And if there’s one thing I learned throughout my experiences with MTG finance, it’s that I trust the experts in their respective fields.

11 thoughts on “My Love/Hate Relationship With Foils”