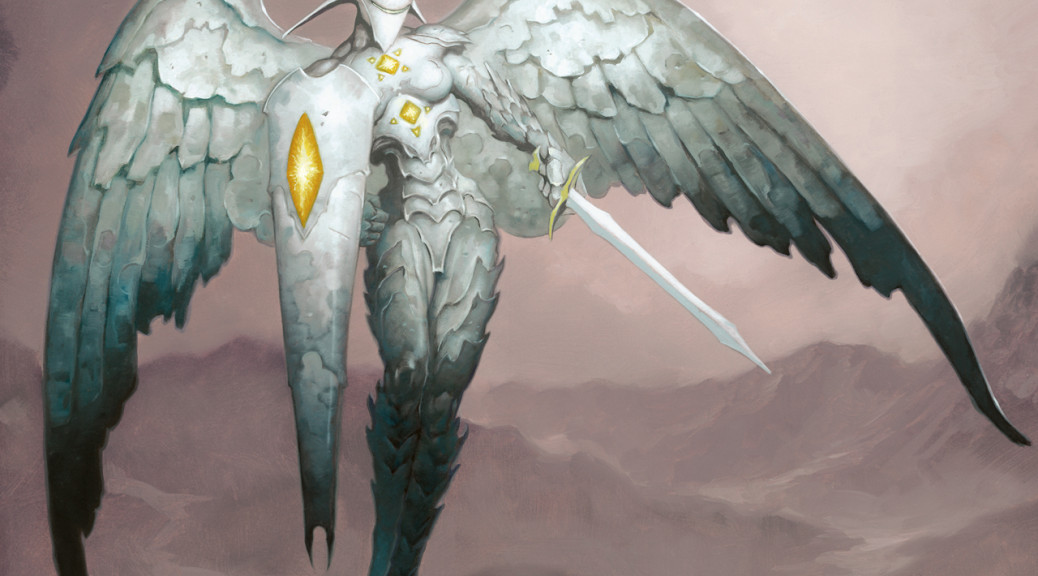 Welcome back, financiers! Before we get into talking about dollars, cents, and mana symbols, I want to thank everyone for sticking with me for the past 60 articles that I’ve written for Brainstorm Brewery and MTGPrice. I’m extremely excited to be on this Avengers-esque superteam that MTGPrice.com has created, and I have dibs on being Iron Man. We’re in the process of ramping up the benefits that ProTraders on the site receive, so please check out  this video if you’re interested in turning Magic into a more serious form of income that can work for you.

While some of our articles are going behind a paywall, I’m glad to report that my content will remain free to read. Now, let’s get into the real introduction to this week’s topic of discussion.

“Man, the reprint of Adarkar Valkyrie really killed the value.” How many times have you heard a statement or question similar to that? When done correctly (or incorrectly, depending on your view of the game and whether or not you own the cards), reprints can absolutely destroy the value of a previously expensive card by overloading the supply in the market. Back in the 1990s, Chronicles nearly destroyed the game due to the massive devaluing of collections across the board. We saw (well, I didn’t personally, as Chronicles was released when I was nine months old) the original five elder dragons tank down to fractions of their roughly $25 values. 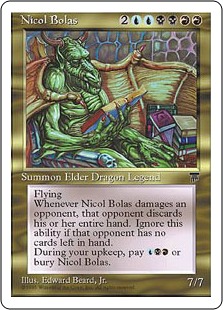 Learning from its mistakes, Wizards of the Coast was much more cautious with the print run of the first Modern Masters. Popular and hard to find casual reprints such as Divinity of Pride  and Adarkar Valkyrie were hammered down to 20 percent of their original prices, and they don’t look like they’ll ever be able to recover anytime soon, especially since they both took an additional punch from the Commander products. Other top contenders for largest percentage price drop due to a reprint have been Polluted Delta, Stifle,  and Sanguine Bond.

Thankfully, WOTC has managed to tread the careful line between “Every card being on the Reserved List” and “Going full Yu-Gi-Oh! by reprinting practically everything, all the time”. Today, I want to talk to you about making money (or losing less money) in Magic, and how to utilize reprints to your financial benefit. In the past week or so, I’ve tuned into a subset of cards that, when reprinted, have shown enough consistent demand to warrant buying in at their floors post-reprint, because they will continue to show upward trajectory over the next several months or years. 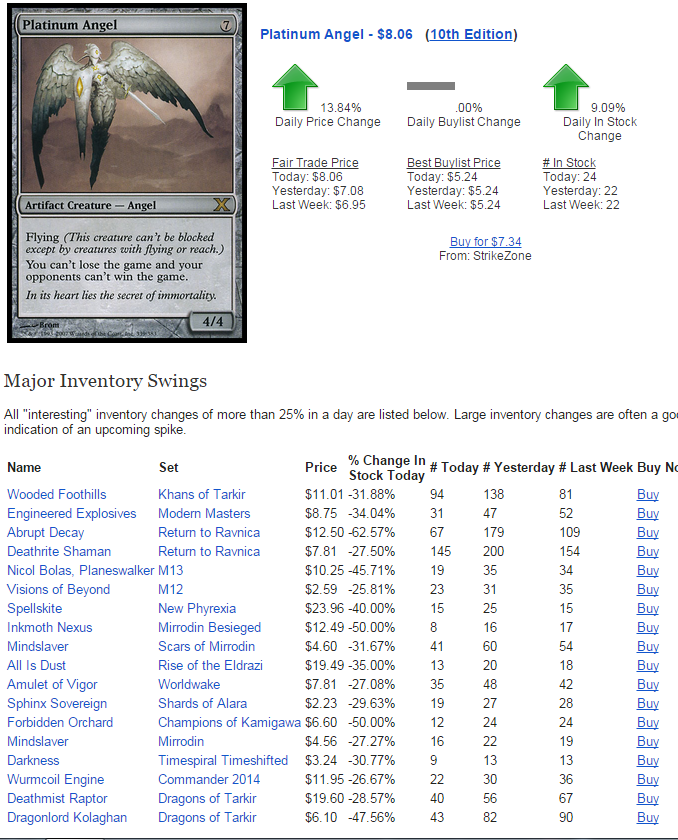 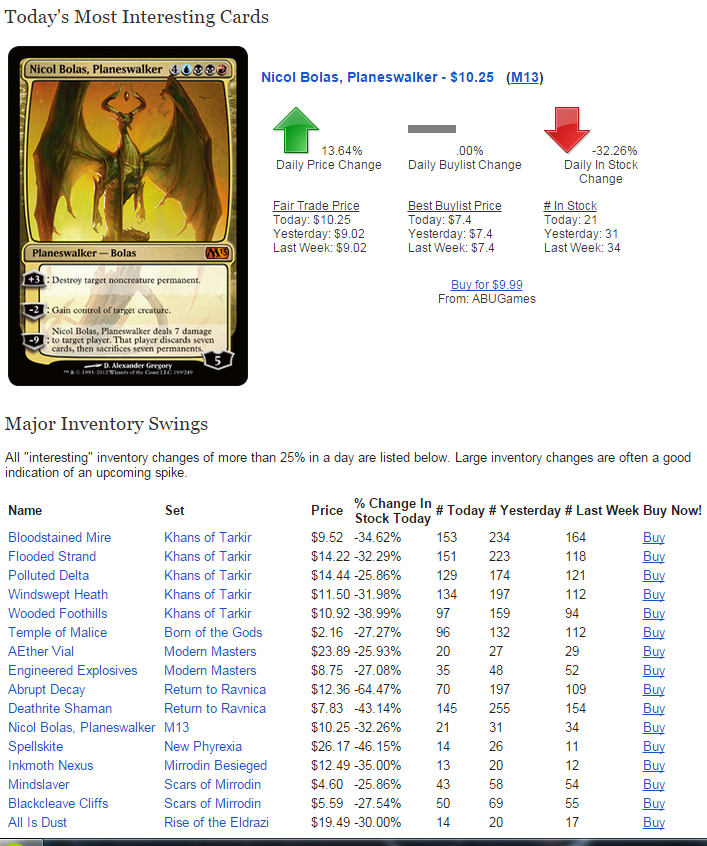 I promise that I don’t get extra money in my paycheck for pointing out the benefits of ProTrader, but these daily emails are honestly a huge help in noticing trends that I otherwise wouldn’t. In fact, the detail in these two daily emails sparked my interest for the topic of this week’s article. Blame my lack of attention if you’d like, but I was under the impression that the Conflux edition of Nicol Bolas was still only $5 or $6, closer to the price of his Duel Deck version.

The specific common trait that piqued my interest with both Platinum Angel and Nicol Bolas is that each has been printed at least three times, and yet still managed to climb in price over the next several years after each reprint. While Nicol isn’t cashing out at $20 anymore, he still managed to double up from $5 to $10 since his inclusion in Magic 2013. Platinum Angel was scraping $3 back in 2012 after consecutive printings in two core sets, and has steadily reached a plateau of about $8 since early 2014. If you bought in at the floor of either of these cards post-reprint and had been holding onto them in the past few months, you’d be very happy to sell out now. In addition to the “invisible” profit of the cards going up, these are two extremely iconic and popular cards to the casual crowd, so it shouldn’t be too much of a chore to liquidate multiple copies as long as you have a Facebook account or a TCGplayer store.

I might be exaggerating a bit here when I use the term “immortal,” but these are examples of the cards that shrug off being “killed” by reprints over an extended period of time. They’re spearheaded by popular or unique casual categories (angels, dragons, planeswalkers, having the ability to prevent you from dying), and grow in popularity with the game. 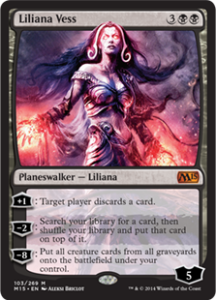 If we continue in the vein of planeswalkers, one of my favorite “immortals” to “speculate” on time and time again has been Liliana Vess. Heh. Get it? She gave her soul for eternal youth, so she’s—eh, forget it. I put speculate in quotations, because I really don’t think there’s a whole lot of risk buying into this version of Liliana every time she drops a bit too far below $10. Liliana Vess has been printed six freaking times, and she still refuses to be a $5 card. While I don’t think we’ll be seeing her again for a while (Magic: Origins will contain the new double-sided Liliana, and then I assume WOTC will be busy trying to prevent her accessorized version from having a $100 price tag. This isn’t to suggest to go out and buy a ton of copies right this moment, but I’ve always been willing to trade for Vess because of how easily she sells, and how casually she shrugs off reprints. 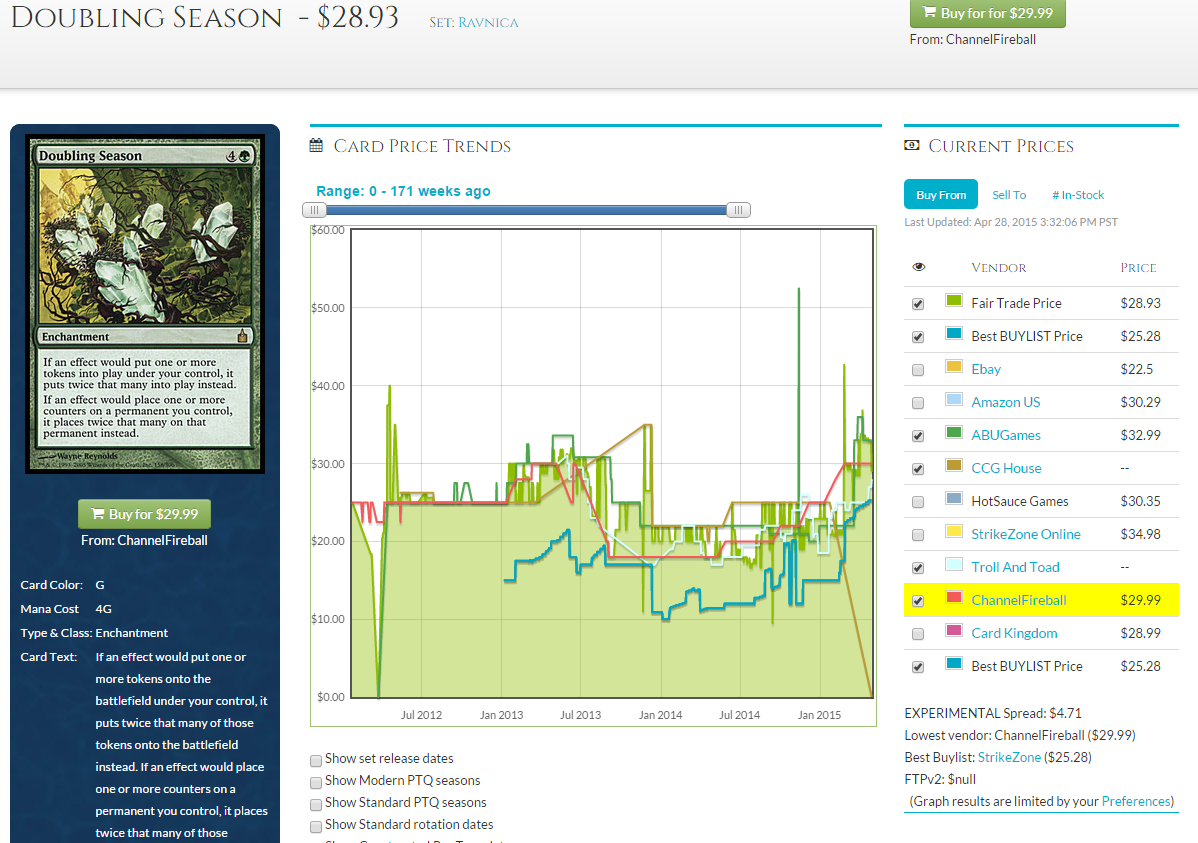 Remember when Doubling Season was reprinted in Modern Masters, and went down to $15 from the original Ravnica’s $30? Grabbing a bunch of those at their floor and dumping them today would have provided you with a much nicer investment than most sealed product that you could have purchased around that time, and would have also been easier to move with lower shipping costs. If, for whatever reason, Doubling Season shows up again in Modern Masters 2015(I do not think that this will happen, as I believe Wizards has a plan to implement a different type of Limited environment that Doubling Season would not fit well into) and the price drops to $10, I’ll trade for as many as I can find.

Did Someone Mention Modern Masters 2015?

Oh, would you look at that. We seamlessly segue’d into Modern Masters 2015. What a well-timed coincidence. If you’ve read this far, then you might be thinking; “But DJ, what about Tarmogoyf, Vendilion Clique, and Dark Confidant? They all shrugged off a reprint in Modern Masters, does this mean that they are the same types of card as those listed above? Am I safe to invest in them with their announced Modern Masters 2015 inclusion?” Well, high-pitched puppet hand voice, I’m going to have to go ahead and veto that idea.

The first Modern Masters set was a perfect storm of an extremely limited print run, a massive boom in the number of players wanting to get started in the Modern format, and the fact that opening a very expensive card has the tendency to encourage a player to build a deck containing it. While there will always be some players who are perfectly happy fire selling their prerelease pools, the following adage aptly describes a lot of what happened with the “Tarmogoyf effect” that followed shortly after the release of the first MMA set:

“Give a man a ‘Goyf, and he’s going to want three more.” – Derek Madlem

MMA2015 is already confirmed to have a larger print run than its predecessor, that much is obvious. The major question is whether the print run will have more of a noticeable impact on the top-dollar cards in the set this time around—and I expect that it will. If you were around for the release of the first Modern Masters, you might remember having trouble finding a box even at $250. SCG was selling boxes regularly at $350, but even they sold out relatively quickly. The big difference this time is that while boxes are approximately $250 retail, at least they are readily found everywhere around the web at that price.

Remember that Divinity of Pride and Adarkar Valkyrie were absolutely crushed by their first reprints, and that there will be similar cards that will be targeted this time around. Our goal here is to find the Doubling Seasons of the set, that will take the hard-hitting reprint with a grain of salt, but slowly grow back over time and provide us with a consistent and steady gain. While there will be a larger print run, I have faith that we will be able to find specific casual cards at their floors when the dust settles, and take advantage of their slow and inevitable gains. I’ll point out one today: 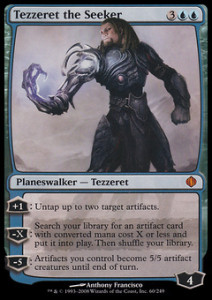 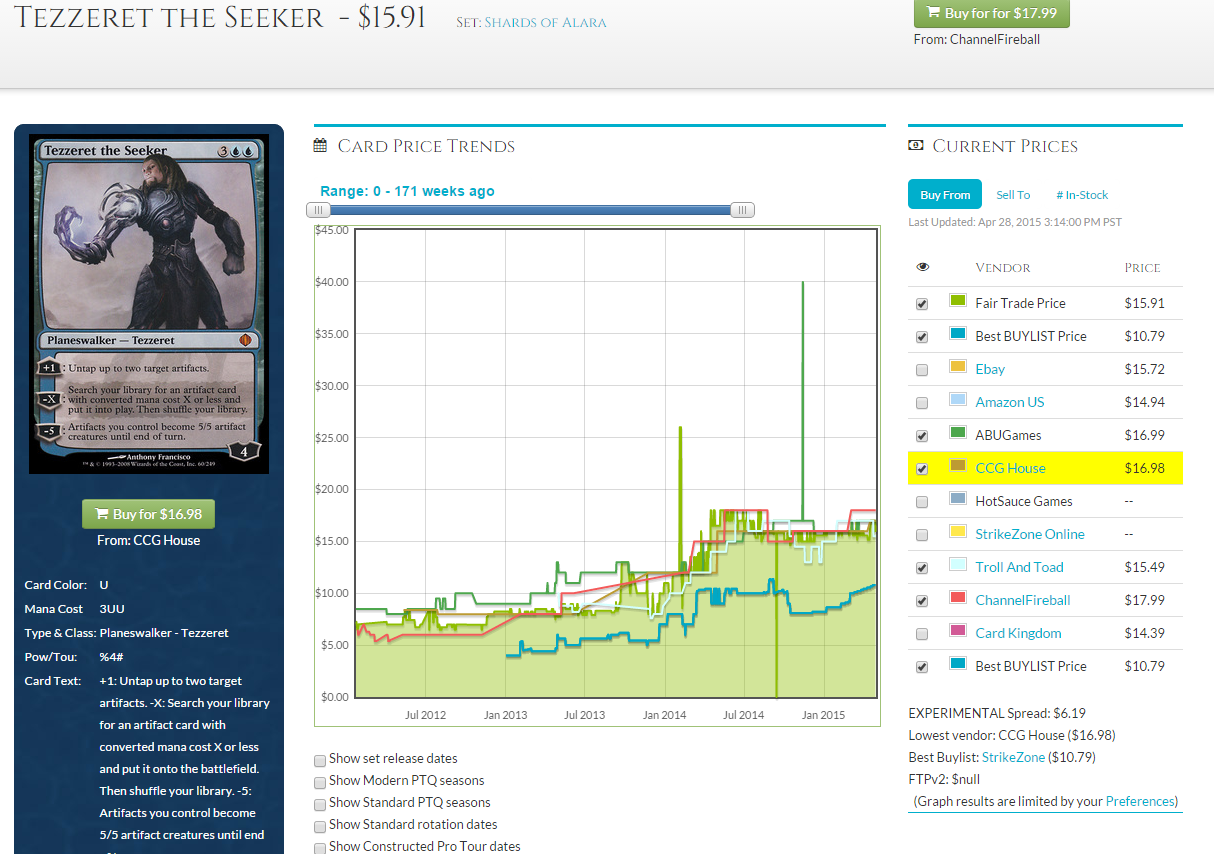 What metal-armed, ambitious artificer sounds like a good candidate for the task? Tezzeret has already been locked in for the set, and he fought back from his Duel Deck reprint steadily over time. As these get cast aside and sold off for more ‘Goyf lottery tickets, I can definitely see him plummeting back down to $6 to $7. When he does, I’ll be more than happy to target all of them in trades, or maybe buy in if I’m looking to place my money in a solid long-term hold. If Tezzeret can survive being ripped apart by angry rat ninjas and being mind wiped by Jace, then certainly our “immortal ” half-metal walker can survive a Modern Masters 2015 reprint.

What do you think? Is there anything in Modern Masters 2015—confirmed or expected—that you are targeting at its floor price? Let me know your thoughts in the comments below.