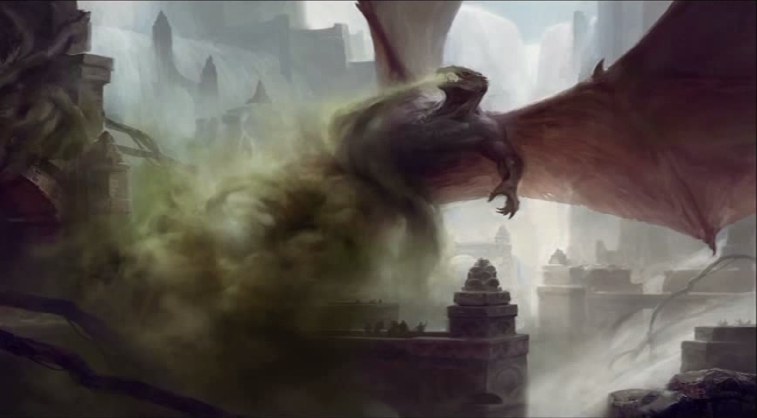 Nobody’s going to argue that hitting on a personal spec target isn’t one of the best feelings in our little micro community. Seeing that 200-percent increase on Boros Reckoner the week after release or reminiscing on when you bought out the internet of Tasigur at $2 each feels great, and it’s one of the biggest reasons players try to dip their toes into the world of Magic finance. Seeing your $3 preorder hang out at $9 for its entire Standard lifespan is something that will always hang on your mantle as a brag story for years to come, especially if you went all-in on dozens or hundreds of copies.

Today, I’m not here to teach you how to do that. My ability to evaluate pre-order cards is less than stellar, considering I called Rabblemaster “hot garbage,” and claimed it would be a bulk rare soon after the set release. You don’t want me to tell you what card to pick out of Origins to be the next Deathmist Raptor, because that’s not what I’m good at. What I am good at, is making money off what I thought Rabblemaster would turn out to be: bulk rares.

What is a Bulk Rare?

As we’re all well aware, not every gold- or red-symbol-bearing card in the rear end of a booster pack lives a privileged life of playability and power. Some are cast aside and forgotten by the Spikes of our realm, left to rot in the dregs of trade binders for years, thrown into boxes of bulk and forgotten about, or left on draft tables to be thrown away. For the purposes of our discussion today, a “bulk rare” will be any card with a gold set symbol and a TCGplayer mid price of under $1.00.

I’m going to separate the types of bulk rares into a couple of different categories. First, we have “true bulk.” These are the rares that can literally never be seen as anything other than $.10 to $.12, depending on what vendor you talk to. These are the Dragon-Style Twins of the world, which have a TCGplayer mid price of $.35, are acquirable as throw-ins during trades (if you play nice during the transaction), and have never seen any sort of play on a camera. You are not happy when you open one of these in a booster pack. Ever. 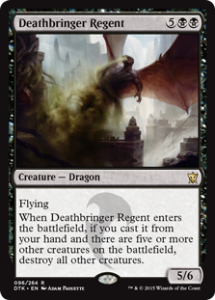 Next up, we have something that I’ve patented as a “fake” bulk rare. While vendors at a Grand Prix will treat true and fake bulk rares to be one and the same, you have room to make more money off them than their bottom dollar counterparts. Let’s take a look at Increasing Savagery: 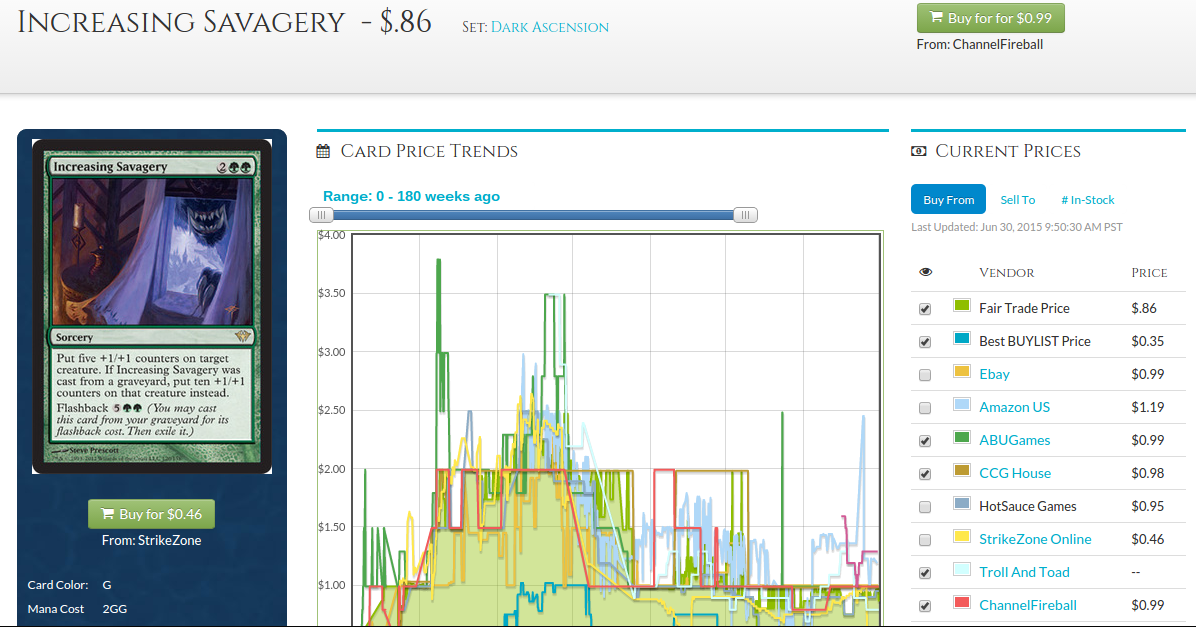 Compare that to the graphs for Dragon-Style Twins and Deathbringer Regent. With a Fair Trade Price that most people would round up to $1, this set of scary window teeth is worth trading straight across for Delver of Secrets or Brainstorm. And the best part is that anyone who cares about casting Delver or Brainstorm is more than likely willing to dump Savagery at a bulk rare price while they’re trying to finish their set of Snapcasters.

We can see a similar price chart in the more recently printed Flamewake Phoenix. 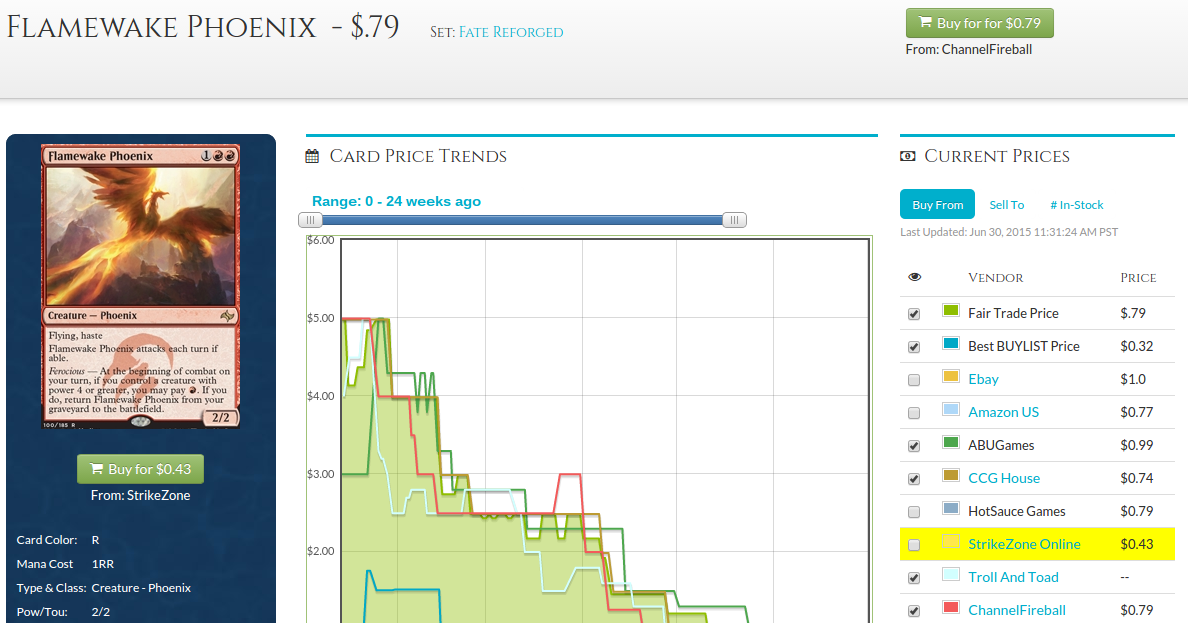 While the card isn’t as bulky as Dragon-Style Twins, it certainly hasn’t made any flamewaves in Standard (yet.) This is a card that I’m extremely happy to pick up while trading for or buying bulk rares at $.10 to $.12 each to set aside with my fingers crossed for post-rotation. I definitely keep cards like this and Increasing Savagery away from my “true” bulk, and either trade them out at $1, buylist them online for more than a 100-percent profit, or speculate at a negligible cost.

Why Should I Care?

Excellent question, voice in my head. When you deal in bulk rares, you get to bridge the aether between the hardcore Spikes and grinders who only care about pureblood Snapcaster Mages and the casual kitchen-table player who will lose his freaking mind over how awesome it will be to windmill slam a Dragon-Style Twins against his friend and then pump it with Increasing Savagery. While it’s a rare occasion to sell massive amounts of bulk rares and reap in huge loads of cash at once, they are one of the most stable assets in Magic.

If you looked at the price of Underground Sea a year ago and given me the choice of one NM Revised Sea or 3,300 bulk rares, I would have taken the 100 duck-sized horses instead of one horse-sized duck. In the past 365 days, Sea has actually depreciated by a decent percentage, while my army of dimes wouldn’t have moved an inch. Unless Magic as a whole collapses, I can’t see the price of bulk rares ever going down past the dime—casual players just love the game too much. While you sometimes end up having to buy Gallows at Willows Hill, those are the ones that you pass off to the highest bidder at your next Grand Prix.

Bulk rares also have the advantage of randomly spiking six-million percent every now and again. Nourishing Shoal was sitting in my bulk rares box before it suddenly became a $15 card, so that dime saw a higher percentage increase than Deathmist Raptor could ever hope to dream of. Older bulk rares from the blocks of Mirrodin, Kamigawa, and Future Sight are harder to find than modern-day bulk mythics, but have infinite more upside just due to the explosive popularity of a deck being on camera. Guess how quickly I listed my Quickens after this past week. While some people say that I’m insane for holding onto all of the copies of Plunge into Darkness that I pull from collections and bulk buys, I’m confident that it only takes one camera match or new card printed to shoot the Fifth Dawn rare into overdrive.

How Do I Pick Up Bulk Rares?

Thankfully, there are a lot of players who aren’t as interested in these penny stocks as we are. Competitive tournament grinders are (in my experience) often happy to grind their dusty bulk rares into Cryptic Commands, especially when you point out the fact that no one else has wanted or will want these cards other than yourself.

Proper etiquette here is to gently approach the subject, and ask if your partner is interested in moving any or all of their NM bulk rares. You let them know that they’re free to decline any card in particular for any or no reason at all, and that you won’t be offended. Set a price beforehand (I like to use $.10 as a cash baseline and $.12 in trade), and one of you can start pulling and making small piles of 10. I also take any mythic at $.25 to help people not have to look at their copies of Archangel’s Light anymore. Even if they don’t exactly have 300 bulk rares to equal the Cryptic they were looking for,  it certainly helps cushion the blow by reducing the number of their own staples that they have to trade out towards completing their deck.

Alternatively, I used to find success with a “two for one” box. While I don’t use it anymore due to keeping my bulk rare boxes on a glass display case in a storefront, it was a very effective method of grinding sheer quantity of bulk rares during our college gaming nights. The general rule is that you have a large box of at least a few hundred rares, preferably ones that have a degree of casual and Commander appeal. While I’m not sure this is something you want to start while playing at your LGS (it always had kind of a “vendor” feel to me, so I always reserved it for casual events at our college), it’s a great way to make a bit of value on the side, and remove the stress of searching through someone else’s binder for some random rare that you don’t care about anyway.

The key to picking up bulk rares goes back to my article “Nothing is Sacred” from a couple weeks ago. Be flexible, and willing to buy (almost) anything. While I’ve personally drawn a line of not accepting MP or lower bulk rares anymore, I don’t care what NM rares I’m buying. As long as the price is a dime, I’m perfectly willing to pick up binders and binders full of bulk rares. Even though I own more than 30 copies of Daxos of Meletis, I’ll still buy the next one at $.10. In the absolute worst-case scenario, I’ll need to unload it at the next Grand Prix I travel to and break even. The best case is that I make $.03 off of it. The best, best-case scenario is that there’s the next Nourishing Shoal in the same pile as that thirty-first Daxos, and that I help someone complete a deck by taking the cards that she doesn’t need off her hands.

It would be really awkward if I closed this article without going over the best ways to sell and trade your newly acquired penny stocks, but I’ve already actually sprinkled those methods throughout. Let’s go over it to recap.

Your number-one outlet is casual players. If you don’t know any casual players, try to find some. I’m not talking about Commander players who understand that Steam Vents is a quality Magic: The Gathering card. Your homework for this week is to meet a casual player who gets excited when they consider putting a Tidal Force into an unsleeved, 78-card deck. Help them experience Christmas in July by giving them a box of sweet rares to look through that are only $.25 each. That’s, like, $3.75 less than a booster pack!

So yesterday, I learned this:

Even hardened financiers like myself can slip up sometimes, and it makes me wonder exactly how many copies of Endless Ranks of the Dead I’ve thrown into my quarter box for the past year and a half. If you have someone local who does what I do on the scale that I do, there’s a damn good chance that they messed up at some point, or haven’t gone through their thousands of bulk rares in god knows how long. I remember pulling Gavony Townships out of other people’s bulk boxes back when the card was $1.50, so it’s your turn to do the same. Do some research and go make money off of people like me. Preferably not me, but other people like me. Go buy their Endless Ranks for a quarter. Leave mine alone.

11 thoughts on “The Dime Dealer”