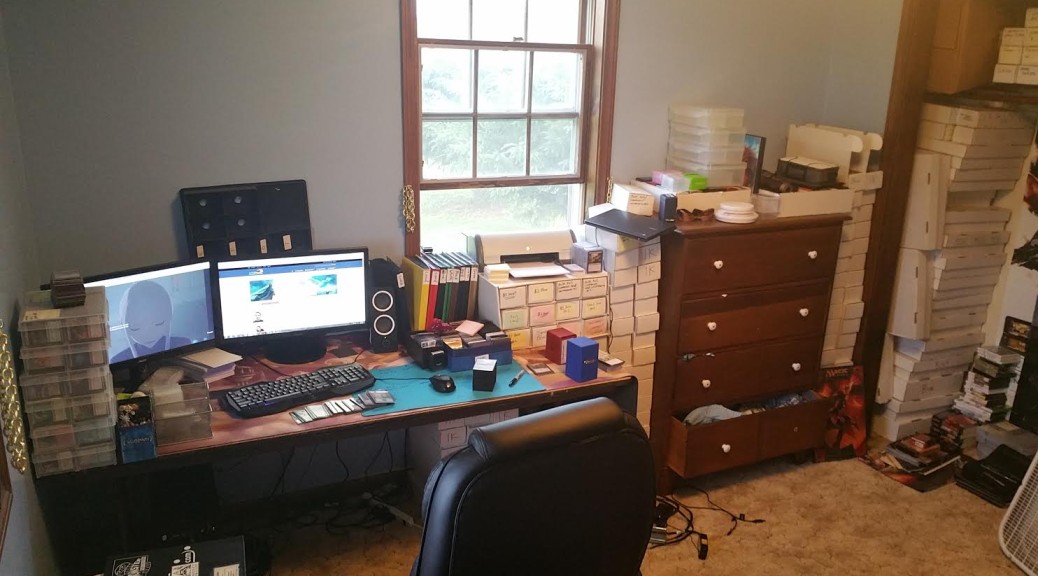 Some of you might remember this article, where I discussed how I got to where I am now as a small-time buyer and seller of Magic cards. One of the biggest points I wanted to emphasize in that article was how flexible I am with what’s on my buylist and how willing I am to buy pretty much anything if the price is right. While I’m definitely not always paying the highest prices in my local area, my trump card has been availability and versatility. From duals to bulk, I’ll take it all.

One of the clear results of this “buy everything that taps” theory is how I ended up accumulating a reasonably sized collection over time, both in bulk and more relevant staples. The days of “bring your trade binder to FNM” have been over for a while with me: the sheer volume of cards that I would have to lug around means it’s just not worth it. I don’t enjoy dragging my luggage case into local stores anyway, so I have to play a process of elimination game as to what gets left behind whenever I make a trip to vend a local EDH event, meet up at a halfway point for a Craigslist sale, or decide what’s getting unloaded to the vendors at the next Grand Prix.

Because I enjoy being able to find specific requested cards at a moment’s notice, I’m always trying to figure out new ways to optimize how my collection is organized. I want it to be easy for me to find things, easy for my customers to find things, and simple to buylist when I occasionally force myself to sit down and do that. (I hate online buylisting.) If you’ve been reading my content for a while now, the following article might seem a bit familiar.  However, hopefully there’s a big enough difference in my setup now as opposed to nine months ago, and maybe my writing will even have improved a bit.

Unfortunately, I can’t stay at college over the summer without spending unnecessary money and taking unnecessary classes. This means that once summer break comes, I pack up everything and move back into my father’s house to spend two months sorting, selling, buying, and binging on League of Legends. On the plus side, I don’t have to worry about going to class or having a social life  during these months, because I’m out in the middle of nowhere. This means I’ve been able to focus entirely on grinding those dollars, and writing about the process. 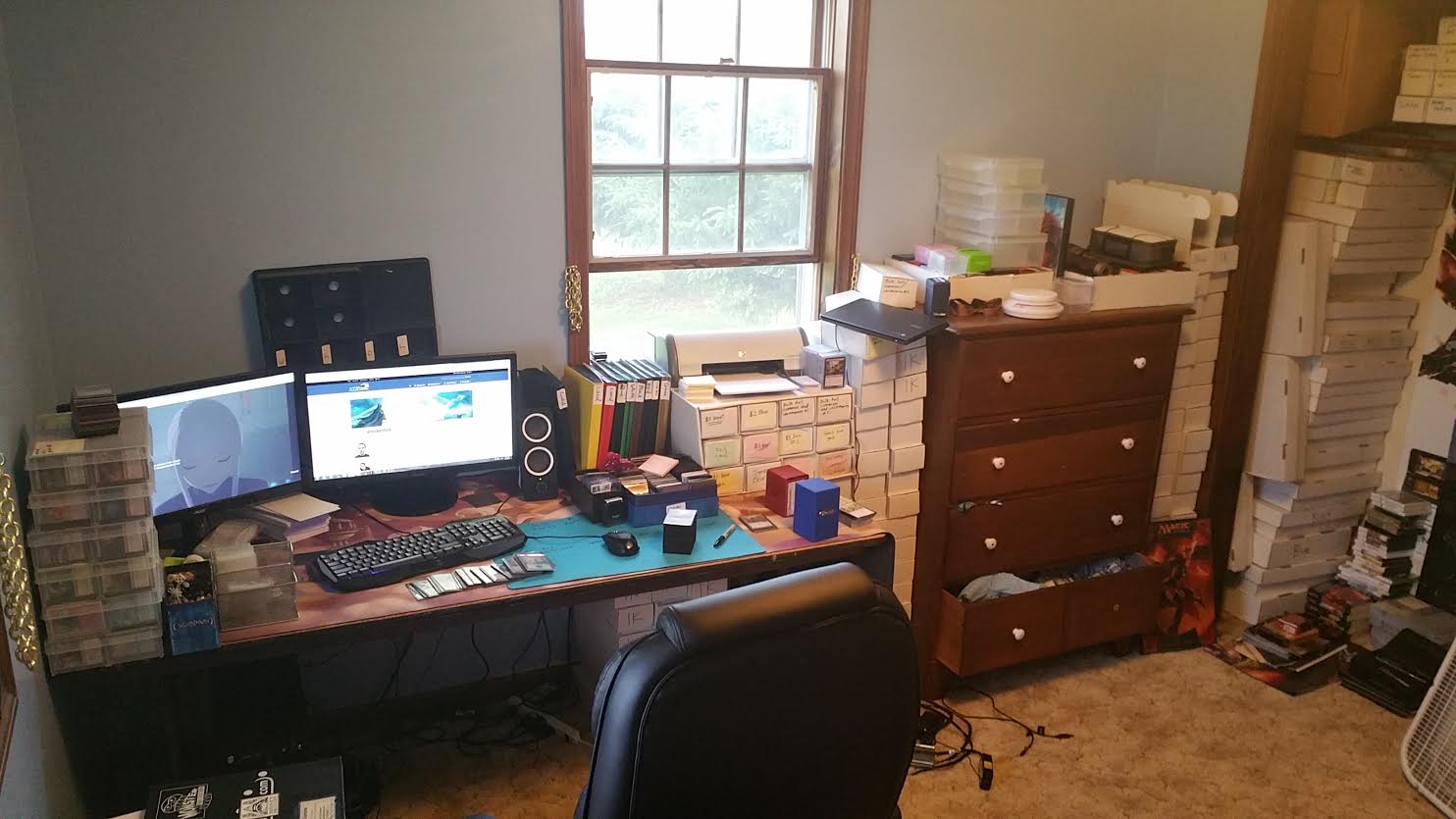 Unfortunately, those 5,000-count boxes you see in the far right corner are not filled with cards. Those are all empty  boxes that I’ve just accumulated from buying collections, and I use them for when I unload mass amounts of common/uncommons or bulk rares to vendors. Everything else is full of Magic: The Gathering trading cards, and this week we’ll go through what goes where, how I use different selling strategies to move differently valued boxes, and where I get some of my supplies. 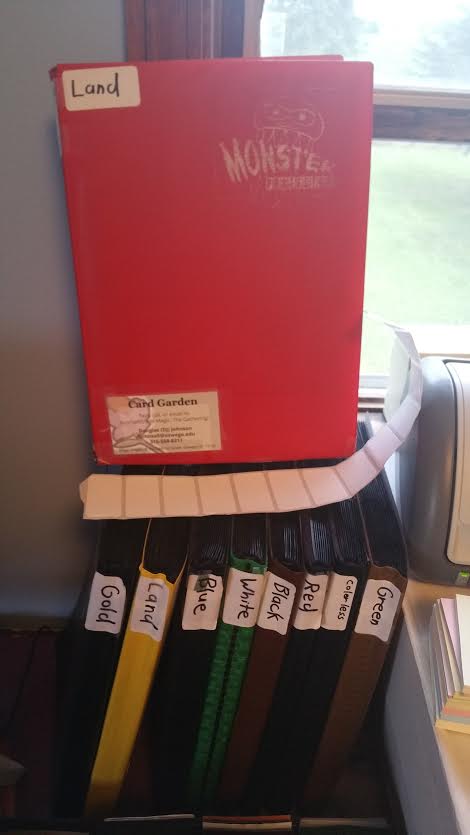 We’ll start off with the more relevant stuff, or at least what most competitive players consider to be relevant. I try to keep my binders clean of any lower-value stuff and move cards that are worth less than $4 to other separate long boxes. Personally, I have a binder for each color, although if you’re a Standard or Modern grinder who wants to have a gauntlet of everything, I might recommend using a binder for each block.

It might also help to have your binder colors match the respective material inside them. It’s too late for me now, but there’s still time for you to save yourself from the confusion.

“Where are your Garruks, DJ?”

“This one? It has a bunch of white cards in it.”

Anyway, I also suggest picking up some type of labeling system for every single box, binder, or whatever item you use to carry cards around. I used a crude method of business cards and price stickers, but a Sharpie works just as well. Labeling your cards (well, not the actual cards) with your personal information gives you a shot at having them returned if you misplace them, and stickering the contents of the binder helps EDH players save time so that they know not to open up the binder labeled “Standard Staples” before the trade starts.

One of the biggest obstacles I used to run into while trying to keep my collection organized as a single entity was maintaining a divide  between the inventory that was listed on my TCGplayer store and the stuff that wasn’t in my online inventory. I had to keep the TCG cards separate, because I needed to remember to scribble down a note whenever I sold or traded one of them away through an outlet that wasn’t TCG. That way I could remove it as soon as I got the chance. The downside to this used to mean keeping an entire separate binder or two labeled as “TCGplayer” and then sorted by color itself. If someone asked about my Avacyns, I had to keep track of whether or not they were in the TCGplayer binder white section or the non-TCG white binder. 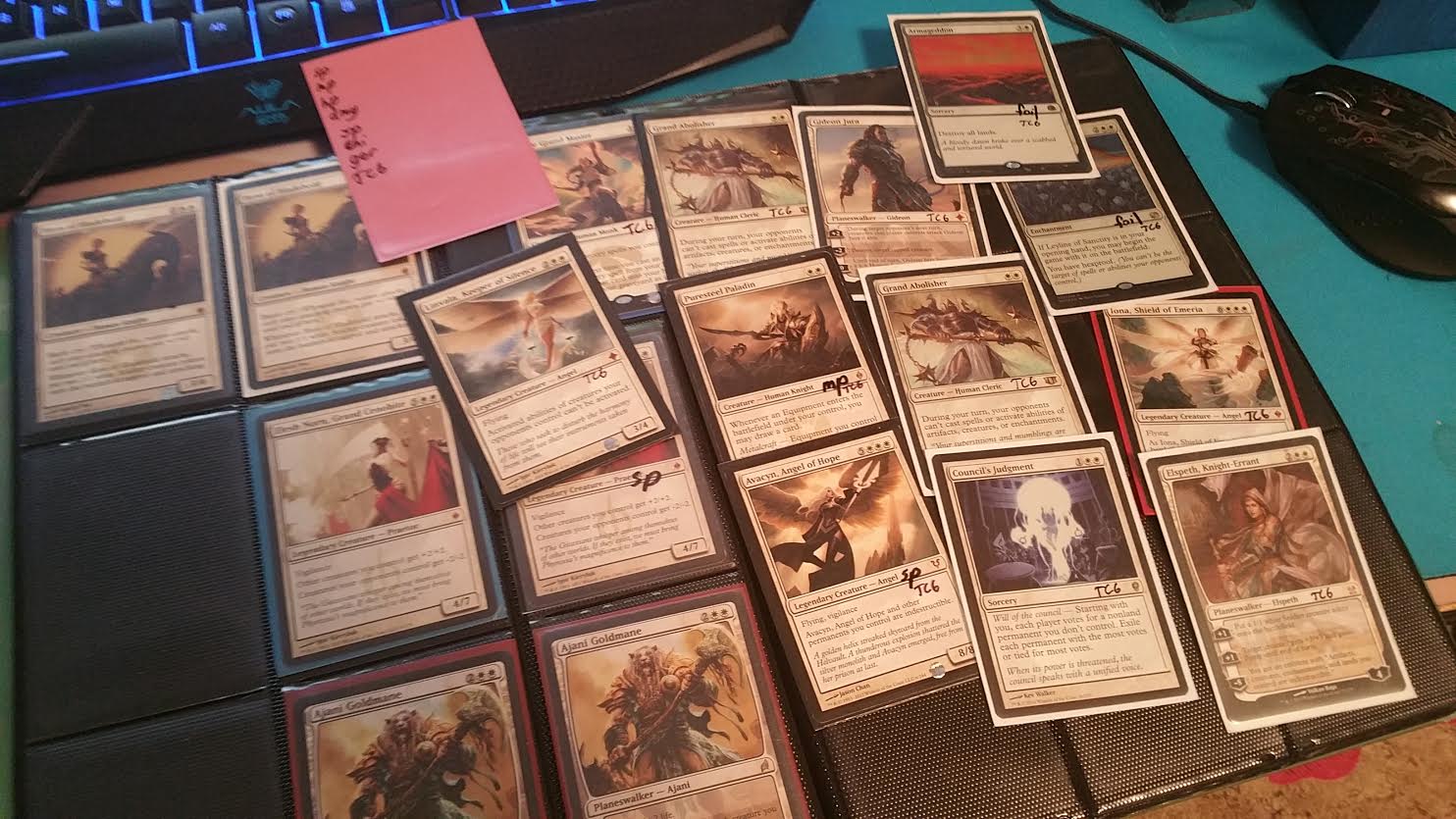 As you can see in the picture above, I eventually had a (painfully obvious) idea that I should have come up with a long time ago. As a fairly strict grader, I mark the condition of every card that comes into my personal inventory before I sleeve it by using a trusty, fast-drying Sharpie. The condition is written on the sleeve to help quicken the listing or trading process further. I also note any language differences with short abbreviations to highlight the difference to any potential buyers. If you have miscut, misprinted, or foreign cards that you’re trying to move out of your binders, it’s a great way to make them stand out a little bit more.

To fix the “separate inventory” problem, I started writing “TCG” on the sleeve of any card that was currently listed on my online store. While a certain number of you probably already do this or consider it so obvious that I should have been doing it all along, the idea just never really clicked until recently. 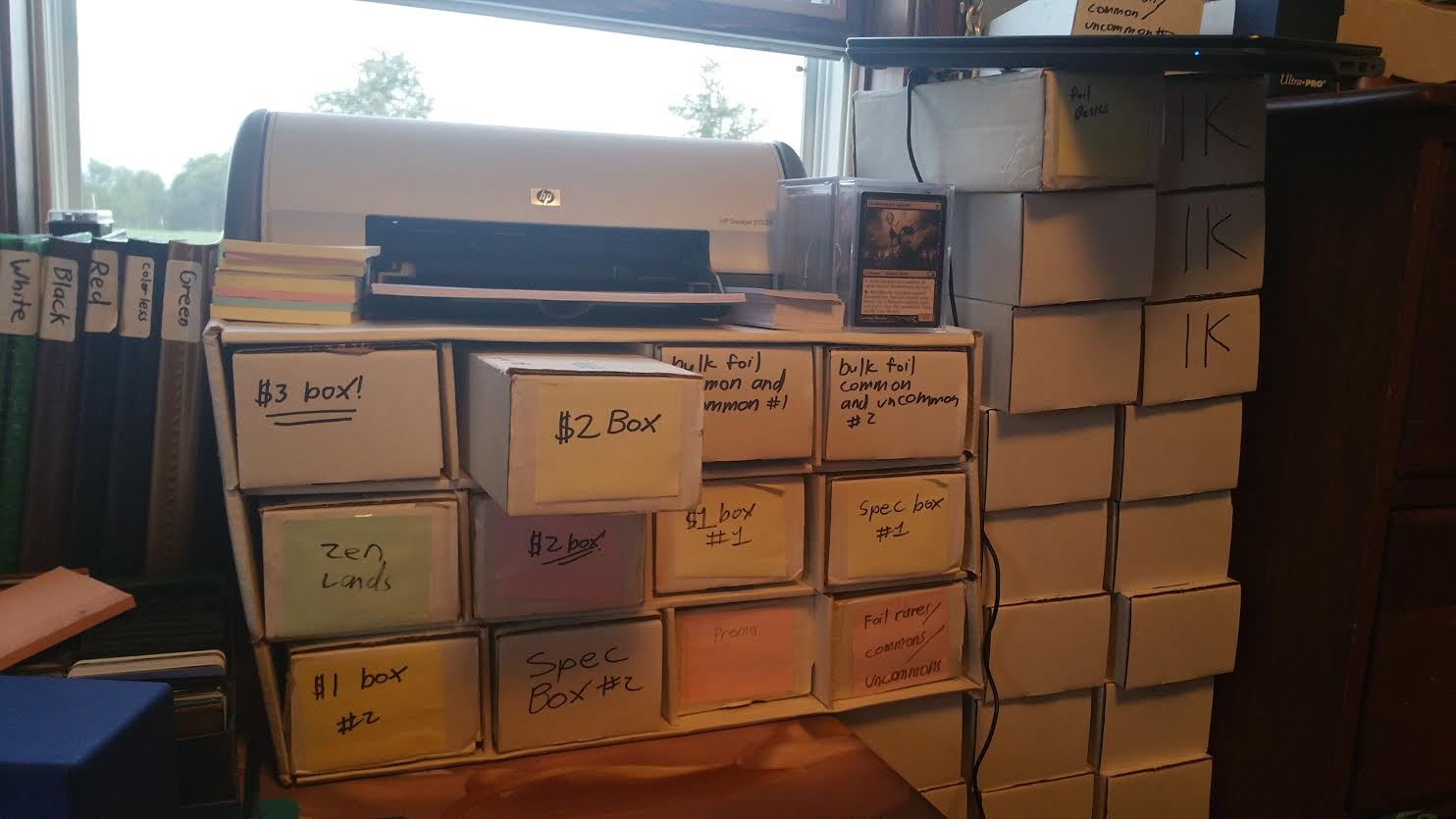 I’ve had this card house ever since my casual Yu-Gi-Oh! days, and I think it’s a great investment for anyone with a large enough collection to fill up at least ten of the 1,000-count boxes. The house itself will run you about $10 to $15 depending on where you look, with Troll and Toad being one of the cheapest I can find. Be careful ordering from them, though—they’ll probably try to fit it into a single envelope and forget the top loader.

Sorting the $1, $2, and $3 cards by price and alphabetically means that it’s still easy to find a specific card in a short period of time, while still allowing you to watch casual players pull out big, splashy mythics with prices that blow their minds. “Kresh, the Bloodbraided is only $2?!”

Most competitive players don’t really bother looking through those boxes of cheaper cards, but they’re easily sorted and accessible for me to pull out their playsets of Electrolyze and Manamorphose.

Another benefit to having all of the cheaper cards laid out in a box like this is that it’s much easier to buylist out of at a Grand Prix. You take your box of $2 cards from vendor to vendor and ask them to pull out anything that they’ll pay $1 on, or whatever number you want to go with.  I’d much rather bring my $1 box to the next Grand Prix and have a vendor pull out Utter Ends for $.25 to $.50 each instead of having them sit in that box until they rotate.

I usually don’t bring the bulk foil common/uncommon boxes or the bulk foil rares unless someone specifically asks me in advance to drag them along. Most vendors don’t care about bulk foils if you’re at a large event, but sometimes you can find a local guy who’s trying to foil out a common cube. Hell, if you have enough bulk foils, build your own foil cube! 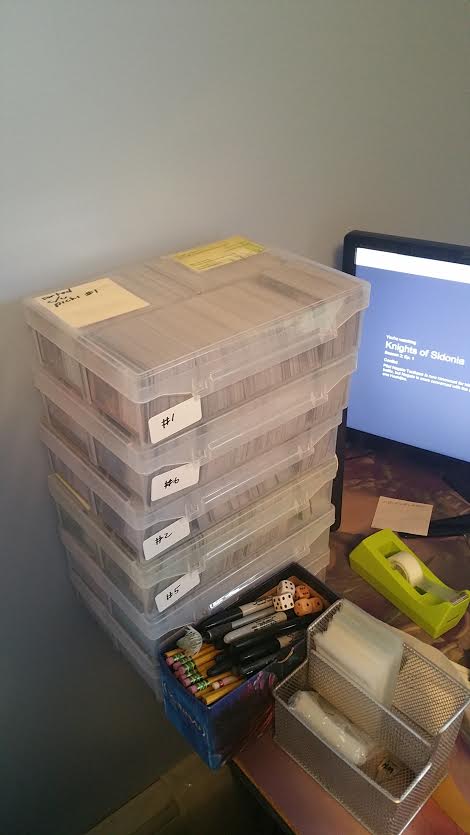 Most of my articles mention picking through bulk common/uncommons at some point. It’s one of the most consistent returns that I have in this business, and I’ll forever advocate buying bulk commons/uncommons until I can make an actual house out of them.

This is where all of those “picks” that I’m always ranting about end up. All of the Nettle Sentinels (before they got upgraded to the $3 box), all of the Glistener Elves (which will eventually go in the $3 box, and I highly advise buying into this now instead of looking for the Moby Dick of Origins finance), and all of the Vampire Nighthawks end up here. The fact that there are six boxes there is a sign of my laziness and unwillingness to sit down and buylist a bunch of it, but I absolutely love these storage case boxes. They hold a little over a thousand cards each, and are relatively compact enough to fit a couple into a backpack. Whatever you do, don’t buy them from Amazon on that link I just gave you. I got all of mine through a combination of gifts and Wal-Mart, where they were $5 a piece.

Anyway, let me know if this was interesting or helpful. I’ve received positive feedback in the past about explaining and snapping pictures of my own personal organization process, so hopefully this had something useful for someone. Let me know in the comments if there’s anything specific you’d like me to cover in the future!