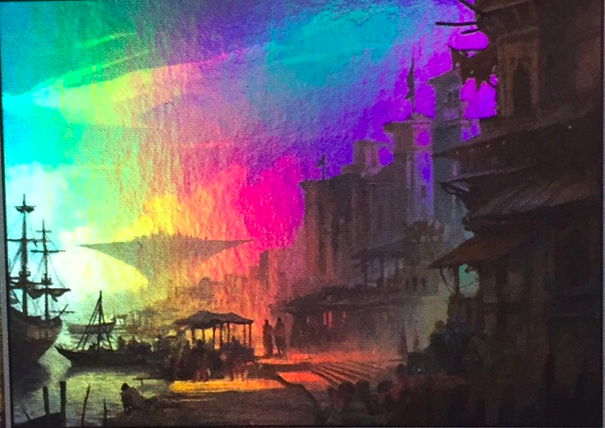 A Much Needed Reprint

This weekend, we got a sneak preview of one of the upcoming Judge Gift Program promos that will be handed out. This is one of the first shots we received of one of the promos: 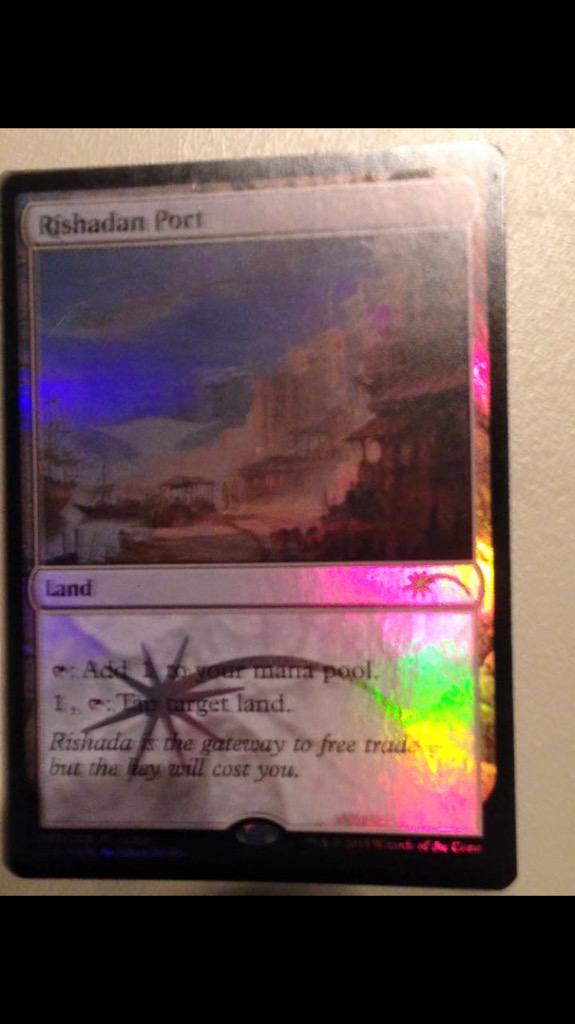 That’s right, Rishadan Port is finally getting a much needed reprint! Rishadan Port was all but confirmed in this Tweeted picture by @TokyoMTG and this is definitely a reprint that I and many players have been waiting for.

Historically, Rishadan Port’s price has been fairly stable at around $30 since it pretty much always saw play in the Legacy Goblins deck. This was the case for several years, before decks Death and Taxes and Lands became forces in their own rights in Legacy. Death and Taxes was better able to use the mana denial effect along with all of the tax and denial creatures that go introduced like Thalia, Spirit of the Labyrinth, and most recently Vryn Wingmare. After Legacy cards started spiking around the time of the Survival of the Fittest frenzy (thanks Vengevine), Port was one of the cards that started spiking along with original dual lands, Force of Will, and other Legacy staples. Since then, the card has creeped and spiked its way up to $100 per copy – which is pretty crazy for a card that only sees play in Death and Taxes, Goblin, and Lands, which only makes up a small portion of the Legacy metagame. With this reprint, the non-foil price should come down (though by how much, I’m not sure since Judge Foils are harder to get ahold of these days – honestly maybe only 10-20% at least initially) since more copies are about to enter the market.

What is also great about this reprint is that we finally get a foil version of the card that isn’t $500+. Masque’s foils are soooo rare, and with players needing four copies to foil out Legacy decks the supply quickly dries up for each person that wants to complete a playset. Now, there is a fine replacement out there (which also has amazing artwork, in my opinion)  that will be the same price as the non-foil copy! This is definitely a reprint that has been a long time coming, so kudos to Wizards for finally getting this one out to market. 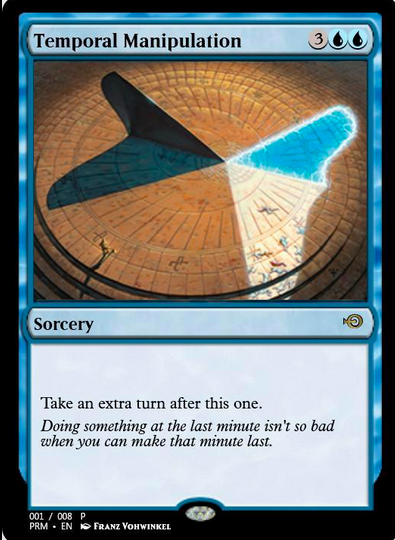 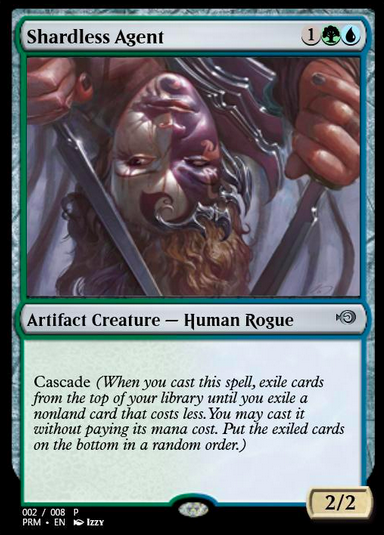 While Shardless Agent didn’t necessarily have to be reprinted, I think it was still a fine choice to include as a Judge Promo. There isn’t any way to easily slide it into regular set, so Judge Foil printings are the only easy way of getting foil copies out there for Legacy players who play Shardless Sultai. I’m actually not sure where the price of this foil is going to wind up – it’s going to be more expensive than the regular, non-foil copies but exactly how much more expensive? Two times? Three times? Four or Five times!? (probably not). The final price, after copies have saturated the market, will probably settle in the 2x-3x range since Legacy players want foil copies and this is the only foil that is out there.

The Judge Foil spoilers so far are a pleasant surprise to us after the Damnation fiasco which was a lose-lose for everyone. It was lose for casuals, since they wanted a Damnation reprint but making a Judge Foil still made it unaffordable for the vast majority of players. It was a lose for collectors and more serious Commander / Eternal players, because it devalued Planar Chaos foils since now there is a new saturation of foil Damnations out in the market with the exact same art. Plus, they also printed Wasteland again as a Judge Promo in that same wave, so that further added to the “Why bother?” many players were thinking when that particular wave of Judge promos was released earlier this year.

I really think Wizards nailed these promos this time around. They did their market research before creating this batch of Judge Foils because all of them revealed so far have been spot on to what the market needs. If only all Judge Promos could follow similarly in the future…

@Rose0fthorns gave us two gems of insight over the past week. The first is that (obviously) Shaman of Forgotten Ways has spiked hard. Going from $2.50 to $9 is some serious gains, and I agree with his advice to get out now while the gettin’s good. There is a huge difference between two (Rattleclaw Mystic) and three mana, especially when it comes to creatures that enable you to ramp up into bigger threats. Plus, the Shaman’s mana can only be used on creatures – something that may not seem like a drawback at first, but then you think about spells like Crater’s Claws and that extra two mana could mean the difference between ending the game on a critical turn or having to pass without having enough mana to Fireball your opponent’s face.

I feel like See the Unwritten has much more potential than Shaman to see significant Standard play. Mostly because with See the Unwritten, you’re getting a threat that needs to be dealt with while the Shaman’s ultimate isn’t coming online until the end game and you can easily predict when your opponent is setting up to activate the Formidable. The Pro’s will try to make StU work again – Jon Finkel was casting this bad boy on camera last time, and I expect to see it on camera again since Eldrazi are going to be so awesome to get off a pseudo-Tooth and Nail.

Second, we should start taking a closer look at Rise of the Eldrazi for more opportunities for pickups. Spawnsire of Ulamog was a fine example, and getting on foils before they spiked was a good call. There are plenty of other targets out there, including the recently reprinted Emrakul and Kozilek in Modern Masters 2015, that should also see nice gains over the next year. I highly suggest you check out DJ’s article from last week as it is a good primer of what cards are starting trend and what you should be looking out for if you’re trying to find the next casual hit that synergizes with Eldrazi. Also, I would be remiss not to mention that @GoingMadlem released a wonderful piece describing what we can expect with the resurfacing of the “Priceless Treasures” Expeditions that are being distributed in packs of Battle for Zendikar. While I encourage you to read the article, the core theme is that Wizards needs to be careful releasing extremely desirable promos like these in regular MTG sets because it can have lasting and detrimental effects on the secondary market if done incorrectly (cough Yugioh cough).

Finally, @shormtg wrote a great Reddit post on Friday about the macro growth of Magic as a whole. It is a compelling read which tries to answer the essential question “Is Magic in a bubble?.” Shormtg argues that we aren’t in the bubble yet, using the example of the difference between comics and Magic in terms of exchange. We have multiple exchanges, like TCGPlayer and PucaTrade, to realize value with Magic cards than we do with comics and other antiques.

Now, another interesting thing about Magic in regards to bubbles is that there is more than one way to make money from the game – the latest example of this being the Art of Zendikar book that Wizards is releasing to accompany the Battle for Zendikar set. While this is one of many ways to get existing players to spend more money on the game they love and falls into Point Two of the posting, I think it is important that we’re starting to see products like this because it tells us that Wizards is thinking outside the box and will pursue multiple alternative routes for generating dollars than simply releasing more and more card based products every year. Though many of us roll our eyes at these products as “cash grabs”, Wizards/Hasbro are a company like any other – and if profits aren’t coming in as expected than budgets are cut and its going to be felt by everyone that plays. The macro economics of Magic are definitely something to consider as we move forward – like Sig always likes to say, it is definitely a viable strategy to make sure your primary collection value is tied up in the Reserve List.

3 thoughts on “Catching up: Battle for Zendikar, Judge Promos Revealed and more!”