One of the downsides to my articles being published on Thursday means that I’m usually pretty late to the party for any Magic news that was shown over the weekend. For example. I was going to spend a few solid paragraphs thoroughly expressing my disgust for how Wil Wheaton butchered the Battle for Zendikar preview show at PAX, but I’m not even going to attempt to hold a candle to Travis Allen’s beautiful explanation on how much of a vomitfest that was. Seriously, if you were thinking, “Maybe I should watch the preview show. Seeing a dumpster catch on fire has no value to the world, but it’s kind of entertaining…”, then forget about it. Don’t give them your clicks or views. Just go be entertained and informed by Travis, then come back here.

Wizards of the Coast, if you’re reading this. Hire literally anyone else to do the preview show next time. Pick a random guy or girl out of the crowd, and let them do the preview show with flashcards or a teleprompter. It would have been better than the middle-school presentation that I had to dredge through. The only things that kept me remotely interested in the show were spoiled cards, MaRo’s interesting design talk, and this guy that I’ve circled in the below image. 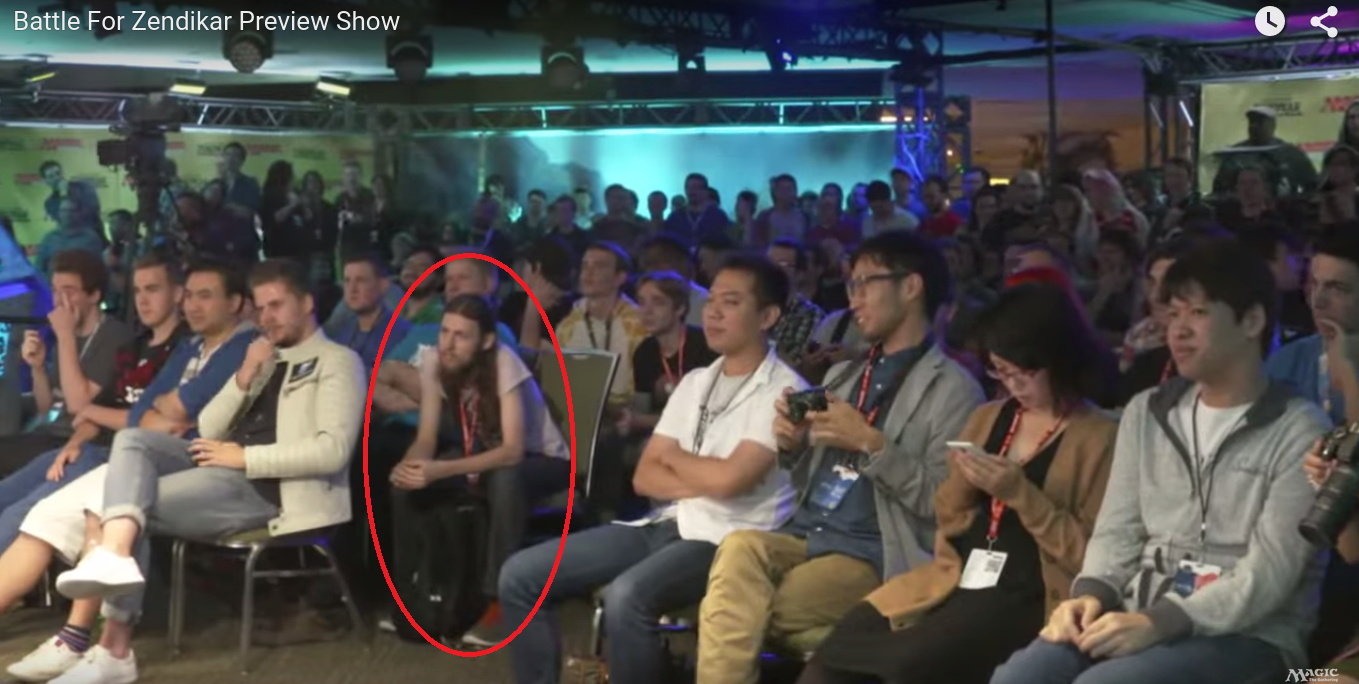 Every time they panned back to the crowd, this guy was sitting in that exact pose, giving off that “yeah, I’m not gonna clap for this bad meme personified, just give me the damn spoilers” vibe. Mystery crowd member, you are my hero of the weekend.

You know what? Forget it. There’s a clever joke in there somewhere, but I’m not going to sit here for twenty minutes and try to figure out what it is. I’ve got Magic cards to write about, not subheading puns.

My point is that back when Dragons of Tarkir was released, every goddamn dragon in the game suddenly went up approximately a billion dollars, just because everyone wanted to play dragon everything. Scion of the Ur-Dragon EDH, 60-card dragon casual, 78-card unsleeved dargon casual, you name it. Well, every dragon went up, except for the FTV copies of Bladewing the Risen that I’ve had for forever…

Anyway, the point is that with Battle for Zendikar quickly approaching, I think it’s time to look back at a few of the older Eldrazi and get in on them before any hype starts to lift them up off the ground. I want to look for safe targets that aren’t likely to plummet any time soon, and some of them will definitely be longer-term holds.

While BFZ won’t be the “Eldraziest Eldrazi set that ever had Eldrazi” as DTK was with dragons, I still think there are some safe pickups and holds that have room to grow. A lot of the dragons that picked up the price pace weren’t even good in EDH, but were just being purchased by casual players who enjoy slamming big, fire-breathing threats onto the table. We’re going to look at a few parallels here in the old Eldrazi set. 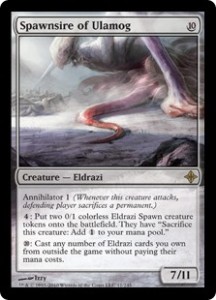 At only $3, I really like Spawnsire of Ulamog as a pickup. It dodged all reprints up until now, it makes a lot of mana dorks, and the last activated ability is perfect for both Timmy and Johnny to get excited about. The annihilator 1 is pretty irrelevant, but who cares? We’re casting every Eldrazi ever. Spawnsire gets a whole lot of new tools with this set, and I don’t think he needs to see competitive or EDH play to get up to $6 or $7 on casual demand alone. SCG is out of stock on NM copies at the moment, but has plenty of SP/MP. eBay is practically dried up of non-foil copies, and there are still quite a few on TCGplayer. Maybe this doesn’t pick up until casual players start cracking packs and building decks, but this is a card I’m very bullish on. You don’t see me pick out spec targets very often, but this is one of them. 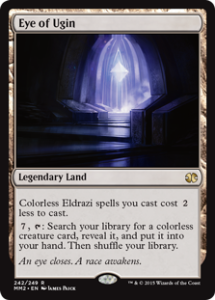 I’ve heard some rumors and suggestions on Eye of Ugin recently, so I wanted to clear the air with my thoughts. Eye of Ugin just got reprinted into dust because of Modern Masters 2015 by being rare instead of mythic, and you only really need one, maybe two in a deck. I’ll admit that I almost had a heart attack when I considered using it with the devoid mechanic, because Forerunner of Slaughter is technically colorless… but you still need to pay colored mana to cast it. Maybe there’s still something there, though. It makes you only need one black mana to cast Dominator Drone, and if you’re in black then you can run Urborg to let Eye tap for mana… I don’t know. Maybe I’m crazy. Being able to tutor for “colorless” devoid creatures isn’t irrelevant late-game, but there’s just so many copies in supply right now. I’m calling Eye a hold for now, because I don’t want to give up on the possibility that there’s a really cool interaction in the set that we haven’t seen yet. 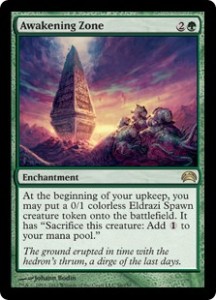 Awakening Zone has been creeping and crawling very subtly over the past couple of months.

It’s easy to not notice a trend of a card slowly creeping from $2 to $3, and Awakening Zone has shrugged off two multiplayer product reprints  over the years. It doubles as a repetitive token engine and ramp spell, and we could definitely see increased demand with the new Eldrazi. It’s always been a semi-staple in Commander decks that can make good use of the tokens, but additional casual demand could put it in the $4 to $5 range relatively quickly.

Keep an eye on this one, but I don’t think we buy in at the $3 it is now. If you want to buy a $3 rare, go for Spawnsire. Just be ready to sell this off at $4 to $5 if it makes it there. I still think it’s a good trade target at $3, especially if you end up being able to move soon-to-be BFZ bulk rares. 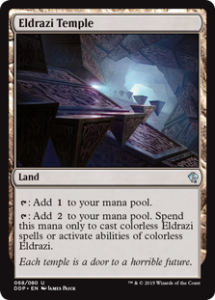 How the mighty have fallen. If it weren’t for the back-to-back reprints, I would’ve loved this as a pick-up. Everyone would have. Being dropped down to uncommon from rare basically kills any chance for this to be worth anything in the next ten years, so don’t even touch it, unless you’re picking bulk and basically getting them for free. Sell them for a quarter to all of the new Eldrazi players and enjoy the small demand bump, but don’t go hoarding them thinking that you have a master plan. 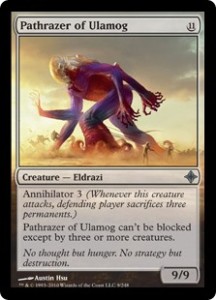 Did you know that Pathrazer of Ulamog is close to being a $3 uncommon? Yep, it’s worth almost as much as a Gitaxian Probe or a Boros Charm, and those ones actually see competitive play. I always preferred Artisan of Kozilek in my EDH decks because of the bonus reanimation and cheaper mana cost, but I suppose there’s something to be said about a higher annihilator number and pseudo-unblockability. At $3, though, I wouldn’t expect this to see any additional gains. The rule here is identical to how you’re moving Eldrazi Temples: be happy with the new buyers, and don’t look back.

Now, let’s step back into something more recent. Shaman of Forgotten Ways recently shot up to $8 off the back of pure, unadulterated hype, but there’s no actual decklists to back up the price tag yet. Because of that, I made the executive decision to list my copies on TCGplayer yesterday, and they sold in less than three hours. 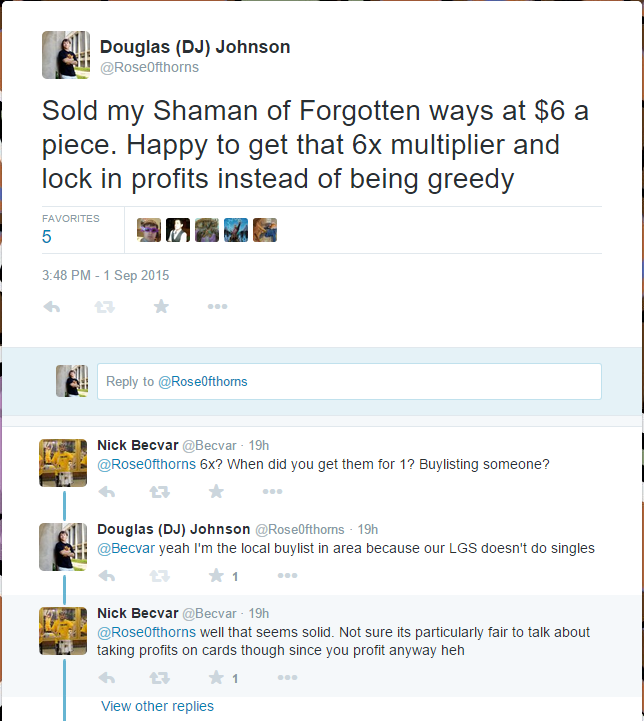 Nick is correct in that it’s not particularly fair for me to say that I sextupled up purely from speculation, because I paid buylist prices for them anyway back when they were $2 retail. I was just happy to unload them into the incoming hype, when I still haven’t seen a tangible decklist yet for any sort of green ramp containing the new Eldrazi. Mark Rosewater confirmed that Ulamog was the only titan left on Zendikar, so we won’t be getting Emrakul or Kozilek as backup (at least in this particular set). I’m curious to see if there will be anything else worth slamming down for 10 or more mana mana; if not, then See the Unwritten and Shaman of Forgotten ways could both very well crash and burn. I don’t want to be holding them when that happens.

Do you have any pocket picks that you expect to jump up from the BFZ spoilers? Let’s continue the conversation below, or on Reddit, Twitter, or Facebook. I’m not picky.