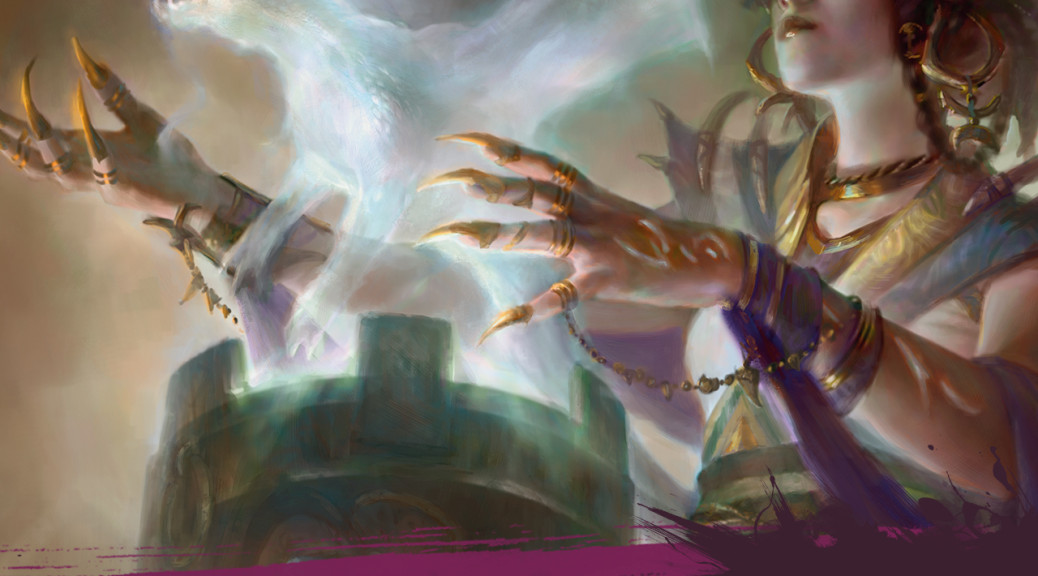 Man, I haven’t been this apathetic about Magic in a while. Don’t get me wrong, I still love it. Magic: The Gathering is my life, and I don’t think I could ever quit the game barring some unforeseen life circumstances that force my hand.

But man, I’m just so bored of this set already. I eventually need foil copies of Retreat to Hagra and Omnath, Locus of Rage for Child of Alara, and a foil Smothering Abomination for Savra, but that’s basically it. I don’t get as excited for EDH as Jason does, and I don’t have a brewing bug like everyone else. I’m stuck in this weird limbo that’s not quite backpack-finance-grinder and not quite full-time MTG retailer, so I have to sit and wait patiently for everyone else to crack their boxes and then sell all of their unwanted stuff to me at buylist prices.

Anyway, enough about my first-world problems. Most of you know that I don’t speculate much, especially on the new stuff. There’s nothing in Battle for Zendikar that strikes me as a “buy this now before the Pro Tour so you can make hundreds of dollars before it’s too late!” and I wouldn’t follow my advice even if I was confident in one particular card.

When I do tend to pick out a card that I think is going to go up, I (obviously) want to be as sure as possible that the card will see the price changes that I predict, and I want to minimize risk to the point where I basically can’t lose out if my decision ends up being incorrect. These factors are why I continue to slowly stockpile up on cards like Necrotic Ooze, Heartless Summoning, and Glistener Elf. Barring the erratic multiplayer product reprint, all of these cards are safe to sit in my speculation storage, while I patiently wait for the right combo piece to be printed, or the right Top 8 configuration to make me a bunch of money.

Every once in a while, though, I like to get in on the fun of speculating on shake-ups in the Standard metagame, or the effects of the casual market. In a previous article of mine, I pointed out how much I liked Spawnsire of Ulamog as a pickup. While the card obviously has zero competitive appeal (except for this one Travis Woo decklist, and the accompanying article that never fails to make me laugh), it’s a casual double whammy for both Timmy and Johnny, and is a budget version of “I win the game” for players that can’t afford Emrakul and friends.

I predict that as these non-competitive players buy packs from Wal-Mart, Target, their LGS, etc., they’ll start to build their own Eldrazi-based decks, and look to utilize some of the older Eldrazi from ROE into their new lists. Spawnsire is cheap, but more importantly, flashy. Remember how there were several dragons that increased in price after the Dragons of Tarkir set release, because these invisible players wanted to complete dragon decks? It’s basically the same principle.

I started by picking up a dozen or so copies off of PucaTrade at an average of 329 points (a point is basically a penny in trade value, so I paid $3.29 in trade). After I checked and noticed that there were a dwindling number of copies available on TCGplayer, SCG, and eBay, I became more confident in my speculation choice and bought out the remainder of SCG’s copies (on September 9, 2015; they’ve since been restocked at a slightly higher price). There are a couple of benefits that ordering from SCG will give you, even if their prices are usually a little bit above the market value. Thankfully, these Spawnsires were the cheapest available on the internet at the time, so that problem was negated. But otherwise, buying from SCG means that my order is guaranteed to come, and I don’t have to worry about the store cancelling. In addition to that, SCG employs extremely strict graders, and several of the SP copies that I bought turned out to be NM by my own standards. 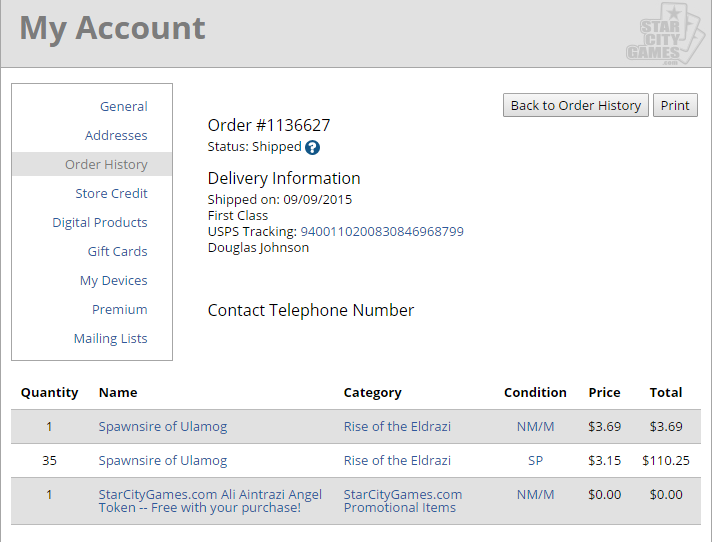 Right now, the cheapest single copy of Spawnsire I can find is on TCGplayer as an LP one for $3.69, and NM ones are upwards of $4.50 on TCGplayer and eBay. I’m not writing this part of the article to try and convince everyone else to buy in with me so I can flip my copies. I’d actually advise against buying in right now if you’re solely trying to make a profit, because for every dollar extra you pay, you have to hope that the card increases by twice that much more to cover the costs of what you bought in at. I bought in at $3.25, so I’m hoping and expecting that Spawnsire reaches at least $6 to $7 retail before I cash out through TCGplayer or trade outlets. If you buy in at $4 to $5, you’re hoping that it reaches $8 to $10 before your profits become noticeable and worthwhile. I still think the card is a fine trade target at $4, if for some reason you happen to still find these in trade binders. 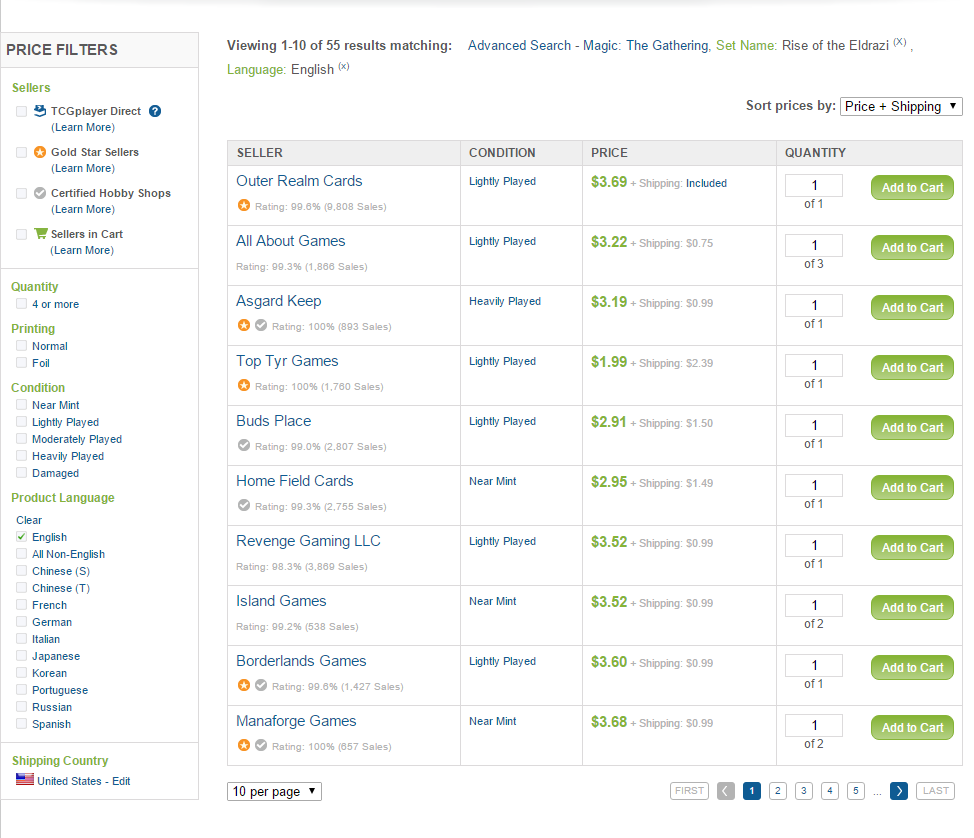 Now, the price isn’t the only thing that I’ve kept my finger on the pulse of over the past few weeks. There’s another number above the store listings that has been slowly and steadily dropping, and it’s a lot less visible to someone who’s just looking up the TCGplayer mid price every few days. 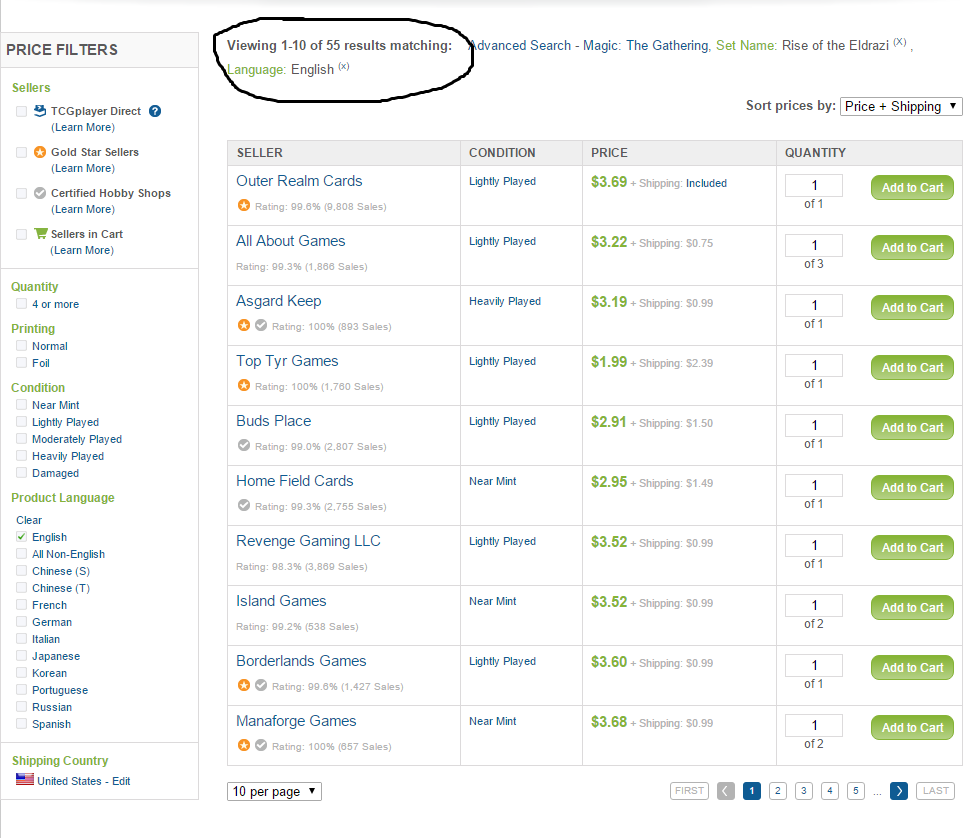 As the number of stores that have the card in stock decreases, the closer we can expect there to be to a sudden price jump. When I bought my copies from SCG, the total number of English sellers on TCGplayer was above 70, and we’re down to 55 as of September 30, 15. While Spawnsire isn’t exactly the kind of card you usually want to own a playset of, it’s worth mentioning that only eight of the sellers on TCGplayer have four or more copies in stock at the moment. It’s very easy to decrease the number of sellers one at a time, as each non-competitive player picks up the one or two copies they need for their ramp deck over the next few weeks.

My last point about Spawnsire goes all the way back to an article I wrote in March, and it was one of the first pieces of content that I ever produced for MTGPrice. If you haven’t read it yet, I personally think it’s one of my better and more original pieces of writing. If you’d rather not go through and read another 2,000 words in addition to your weekly dose of DJ Johnson, the TL;DR of the article was that it’s important to keep track of the cards at the bottom of the MTGstocks interests page, whose prices have only ticked up by a small percentage day after day. These small bumps can forecast a larger, more sudden spike that everyone will later claim “came out of nowhere,” even though it was fairly predictable to those who paid attention. 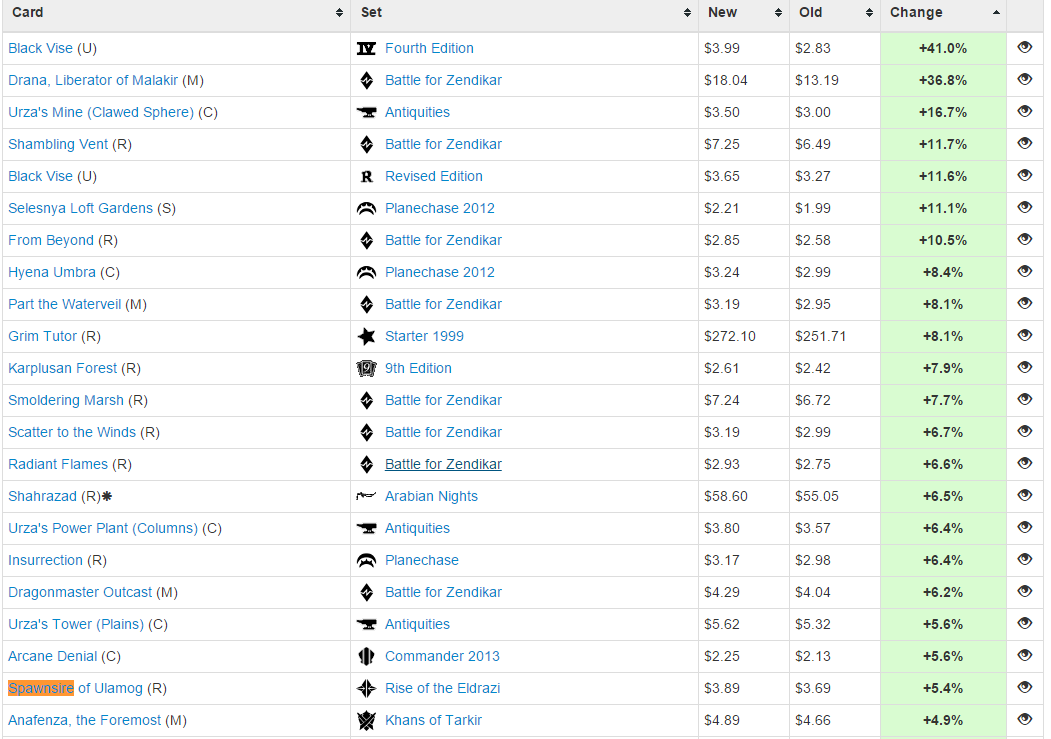 As we can see here, Spawnsire received a small five-percent bump since yesterday, and he’s been on this page multiple times every week. Even though these price changes aren’t nearly as drastic as the newly unbanned Black Vise, they’ll certainly be more relevant and longer-lasting months down the road when non-competitive players continue to seek out Spawnsires with no additional supply and nobody cares about Black Vise anymore.

Huh. I did not think I could write an entire article about a single card, focusing on my strategy and tactics of speculating on it. Was this helpful to you? I figured everyone wanted a break from the past two weeks of Q&A-style articles.

In other news, Hardened Scales continues to reward me for my laziness. Every time I see that thing jump up another dollar, I think, “Man, I should really sell all of those copies I have. There’s no way that this hype can be sustained for this long without a proven winning decklist.” Then it goes up again. This time I’m going to remember to sell out at $4. I mean it.

4 thoughts on “Specsire of Ulamog”