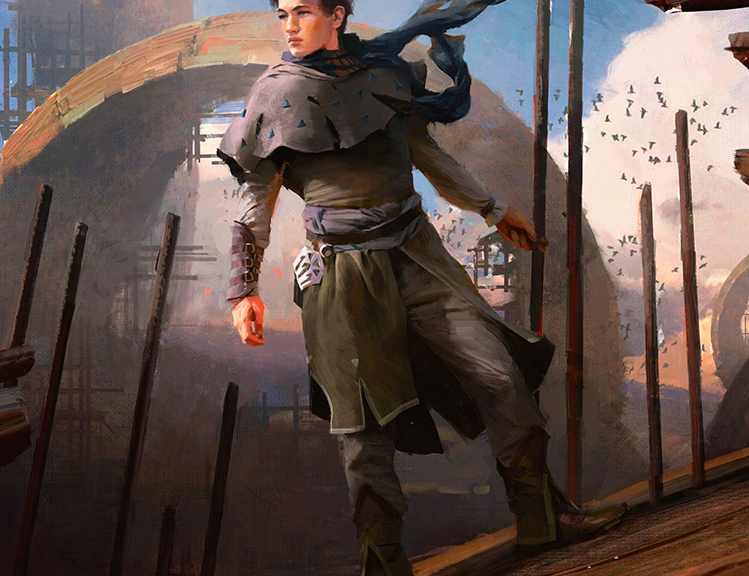 Blue is Back in Standard

For a set that is still being drafted, I find it hard to believe that there is a mythic that is $40 and still rising within the set.

However, Jace, Vyrn’s Prodigy has spiked to levels (for blue mythics) we haven’t seen since the last time Jace spiked this hard in Standard. And last time he kept going, past $100 eventually.

Let’s be clear – Vryn’s Prodigy is no Mind Sculptor, nowhere even close. First of all, Prodigy is a creature – a Merfolk Looter that will flip into Telepath Unbound once yet get five cards into your graveyard. Granted, this is pretty easy to accomplish, especially in decks based mainly around spells like Jeskai Tempo or Esper Dragons.

Even once he is flipped, he still affects the game only in marginal ways for each ability. Giving creatures -2/-0 is not bouncing them, he isn’t Fatesealing your opponent out of the game, and he isn’t giving you direct card advantage and/or selection. So what’s the deal? Why is this new Jace’s price, whose power was initially dismissed out-of-hand initially by many players, starting to mirror the version so good that it was included in From the Vault: 20?

Let’s view this from another perspective, that of Nissa, Worldwaker. 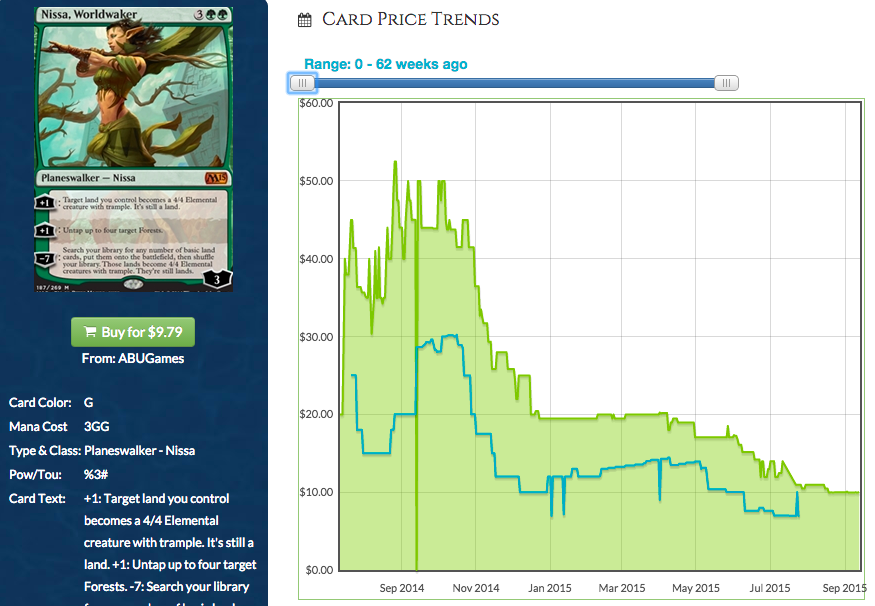 Nissa also started out very high, around $30, and eventually hit $50 while in Standard and stayed there for about two to three months. Then, the decline started happening. By January of this year, she dropped to around $20 and has slowly been decreasing ever since. Now, she is around $10 and will probably go lower once she rotates out of Standard. I think that the new Jace will follow a similar trend. But only because I have Nissa to base him off. Let’s compare how Jace is different than Nissa, and how that could affect his future price.

First, Nissa is green which is arguably one of the strongest colors in Standard. Blue has been argued to be on the weaker side of the spectrum these days, since counterspells, removal, and card draw have been getting worse and worse over time. The decks where Nissa was included were some of the strongest in the Standard metagame, and there were no shortage of Pro’s that extolled her virtues both on camera and through the written word. Her abilities are really good if you can get her online, especially against control decks as she can create an army out of your lands over time. Jace being blue means that if he continues to be amazing, he will be included in basically every blue deck since the options for blue have been limited these days. This will, of course, make the price go even crazier eventually.

Second, Nissa costs five mana while Vryn’s Prodigy is only two. There is a colossal difference between two and five mana, which is why we see Jace being included as a playset in all decks that play him as a card. Another reason Jace is included as multiples in the decks he is featured in is because he can enable decks with combos to initiate them faster since his primary function in the deck is to loot, loot, loot. He is also a great target to use up your opponent’s removal, as you really aren’t losing much if he gets killed early (he’s only a 0/2 after all) and you will gain big over time the more he is left alone. So, Nissa was limited to two copies max in the main decks (with one or two copies in sideboards if control was big in a particular metagame) and Jace will see more copies played in decks since opponents will remove him early, which means you want more copies to replace those that are going to bite the bullet early game.

Finally, the last difference between Vryn’s Prodigy and Nissa is eternal applications. Check out the following stats for recent decklists that have featured Vryn’s Prodigy.

Granted, the number of copies per deck is mostly restricted to one or two copies, but there is a clear breakthrough of Vryn’s Prodigy into Legacy since he is seeing play in at least four different archetypes that we know. This explains why his foil version is already $90 and climbing. I expect that he will break through to Modern as well once more blue decks pop up over time. The most surprising is Vintage, which as we know only the best of the best break through to see play. For Jace to see play in Vintage, either it was very good tech for the moment (which could be the case, I’m not a Vintage expert by any means) or his looting and flip to pseudo-Yawgmoth’s Will is actually a nice addition to decks that want to continue flashing back cards from their graveyard. All in all, the eternal play could be a flash in the pan for something like Vintage but I really think that Jace has staying power in Legacy since he is seeing play across at least four different archetypes as another way to (cheaply) help control the game.

All in all, Vryn’s Prodigy is one of those cards that is deceptively powerful. He could be compared to cards like Pack Rat, where if you never played against it you might think it isn’t that good, but once you get beat because of it you’ll forever be changed.

How about Vryn’s Prodigy’s price moving forward? I think Vryn’s Prodigy is going to drop once Origins approaches rotation as all Standard rares will, though the foil isn’t going to move much in price if he is already seeing play across several different eternal decks. If we base his price off Nissa’s, but alter it to include the fact that he is being played as playset in Standard decks and blue needs all the powerful tools it can get to be good, I think this could be his price trajectory: 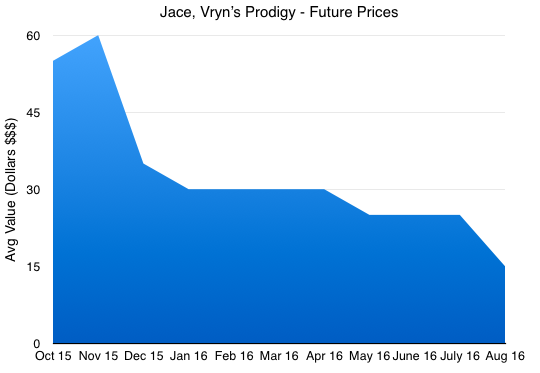 My boldest prediction is that Jace could hit $60 while in Standard, but only because he is currently being utilized as a playset in many blue decks. If that changes, then $60 will look like a silly prediction. Right now though, no one’s laughing at his $40 price. Being featured as a playset in, say, a Pro Tour winning deck could seal the $60 deal through winter. Eventually though, by August of next year he should be back down to around $15, if not before then if his time in Standard dwindles prematurely.

I also wanted to mention how Magic Origins was a preorder bonanza based on the past and current prices of the chase cards. You had the chance to preorder Vryn’s Prodigy and Hangarback Walker at bottom dollar prices. That’s not something that we see happen very often. Nissa / Goblin Rabblemaster were the previous pair from the last core set, and Rabblemaster was cheap initially but Nissa was never below $10. Usually the cheap preorder is either one or the other. This time players had a chance to get both!

While I and many others missed out on these preorder opportunities (since they almost never work out favorably) we shouldn’t get hung up on what we missed out on. This is the fastest way to drive yourself crazy with Magic finance. The best way to get back on track is to figure out where the metagame is going and how we might prepare for it.

We know with Battle for Zendikar that we’re continuing to get strong multicolored cards – both Converge and Devoid multicolored cards have been spoiled and several of them seem spicy enough to see Standard play. With all the converging and devoiding that is going to be happening the future, we know that Hangarback is going to continue being good since it is a colorless creature that slots into everything from aggro to control. What other conclusions might we draw from multicolored still being supported heavily?

The Khans  tri-lands will continue, along with fetchlands, to support these multicolored combinations. I expect the price of these lands to hold strong through Battle for Zendikar, with the off chance that one or more might go up at least $1 due to heavy Standard play.

On the flip side, aggro cards will be great against these slower 3+ color strategies that emerge. Cards like Monastery Swiftspear should rise to meet demand for decks like Red Deck Wins that exploit slower formats. Aggro also tends to be good shortly after rotation, since the format is still being figured out and the aggro deck’s linear strategy is easier to pilot than the emerging midrange or control deck’s strategy.

If you don’t have the time or energy to try and figure out the format, why bother? Just get a list together of eternal playable staples that are about to rotate and start picking them during the next few months after rotation. With Thoughtseize leading the Theros pack of rotation cards that are definitely going to hold value and even increase over time, there are certainly multiple other cards from the Theros block (and M15) out there that will be good long term holds. Granted, these cards aren’t going to turn you a quick profit, but they will hold value long term which one of the primary strategies I advocate with #mtgfinance.

That’s all I have for this week! As always, let me know what you think in the comments and on Twitter @gildedgoblin.