My definition of when I buy a “collection” has always been loose at best. I classify pretty much everything as a collection, because it’s just easier to have a category in place for when I mark it on my spending spreadsheet for the month. Even if I just buy someone’s EDH deck at buylist prices, I label it as a collection. Four thousand commons and uncommons that a Legacy player was looking to move from his basement? Also a collection in my book. Maybe I should start to refer to the smaller pickups as “acquisitions,” because I’m not buying out their entire accumulated (or collected, if you will) lot of cards. I’m just buying what they don’t need at the moment.

Lik Dis If U Cri Evertim

Back in May of this year, I wrote about my first few lots that I had purchased through Facebook at buylist prices. I’m not referring to that guy from high school on your friends list who happened to see one thing in his feed about Magic, so he sent you a private message reminding you that he still lives in the area and has a collection of cards he wants to sell you from 2003 to 2005. While those are nice and lucrative (albeit rare), I’m talking about having someone from California ship me two of her tier-one EDH decks at buylist prices. You don’t have to spend time sorting through bulk, and you just get to immediately throw the cards up on TCGplayer, eBay, or another buylist that you know will pay just a little higher than what you gave the seller.

Are these acquisitions an every-day occurrence? No, definitely not. I will say that they’ve been a more frequent find than Craigslist nowadays, and I find myself sending messages to sellers at least a few times a month on average (compared to less than once a month of finding a Craigslist ad worth sending a reply to). Not every seller is willing to take your offer of approximately buylist prices, and that’s okay. We’re there to give them options, not force-feed them our Cutco knives.

I’m going to go through my most recent  acquisition step by step, and try to show you how both sides can leave the conversation and transaction without being ripped off, and without feeling like you’re being ripped off.

Where Do I Find Them?

Well, you want to be a part of a lot of Facebook groups, for one. Does this result in a somewhat unsettling amount of garbage posts that you really couldn’t care less about? Yeah, definitely. Thankfully, you quickly learn who’s a frequent poster, who to “hide” posts from, and how to immediately recognize if a post is worth your time in the first few words. To get started, I recommend joining all of the groups that I listed in the first article. All of those groups are still active, and I’ve picked up (or sold) cards in every one. In the past several months since that article has gone live, I’ve found a couple of new groups that you can also find some value in:

The SICK deals page doesn’t have nearly as many “buylist”-esque posts, but I highly recommend joining it if you’re a player who still occasionally wants to buy cards for personal use. The prices are always cheaper than TCGplayer or eBay, and can be very close to buylist sometimes.

Although these are the most prominent groups that don’t correlate with a specific region, I still highly recommend networking with your local area and joining most of the region-specific groups on Facebook. Finance aside, they’re good ways to make friends, carpool for events, learn about new sales your LGS might be having, etc. 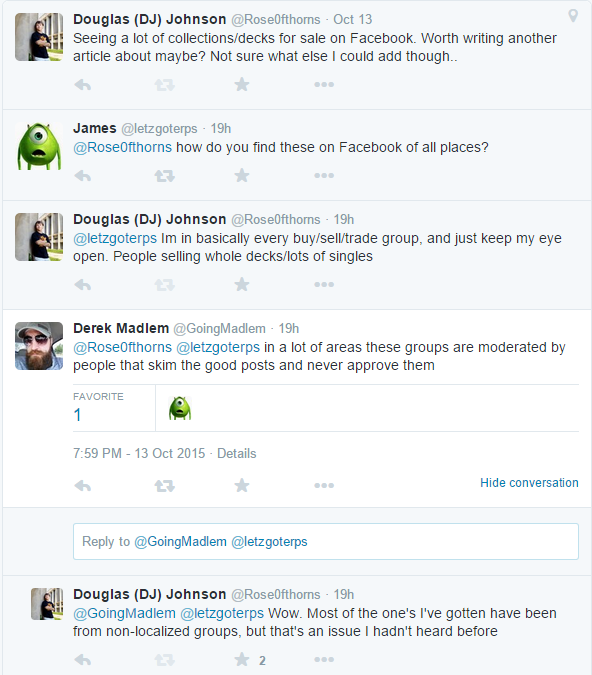 Derek bought up an excellent point that I had never really run into (at least that I know of): some area Facebook groups may be moderated by the same people who buy and sell collections as a source of income. If the group settings require posts to be submitted to an admin before they’re accepted, then we may very well be missing out on a lot of the sweeter deals before they even go public. While there’s unfortunately nothing we can really do about that, you’ll probably notice eventually if there just don’t happen to be any good deals at all on your local Facebook group.

Fool Me Once…. Or Not At All

Any of you who were previously aware of the Facebook MTG market are probably familiar with horror stories of players being scammed out of cards, not being paid, or their trade partners blocking them and never getting the cards they were supposed to. It sucks and it’s definitely a risk that we take anytime we deal with someone who we don’t know personally through an unregulated, third-party channel like Facebook. I’m lucky enough to have never been ripped off throughout my experiences buying on FB, but I believe that’s partially because I’ve learned to be very cautious in the steps I take before a transaction.

Before I first send money to someone else over the internet, there are a couple of basic precautions I take:

Now we’re getting to the part that you probably hoped I would start out with. Negotiating a price to buy other people’s cards at buylist prices from the comfort of your home or smartphone. Let’s look at my most recent Facebook acquisition, and how I broke the ice with my seller.

Unfortunately I didn’t save the initial post before I got the idea to write this article, but he provided a list and initially said that he was looking to get $1000 for the entire lot. 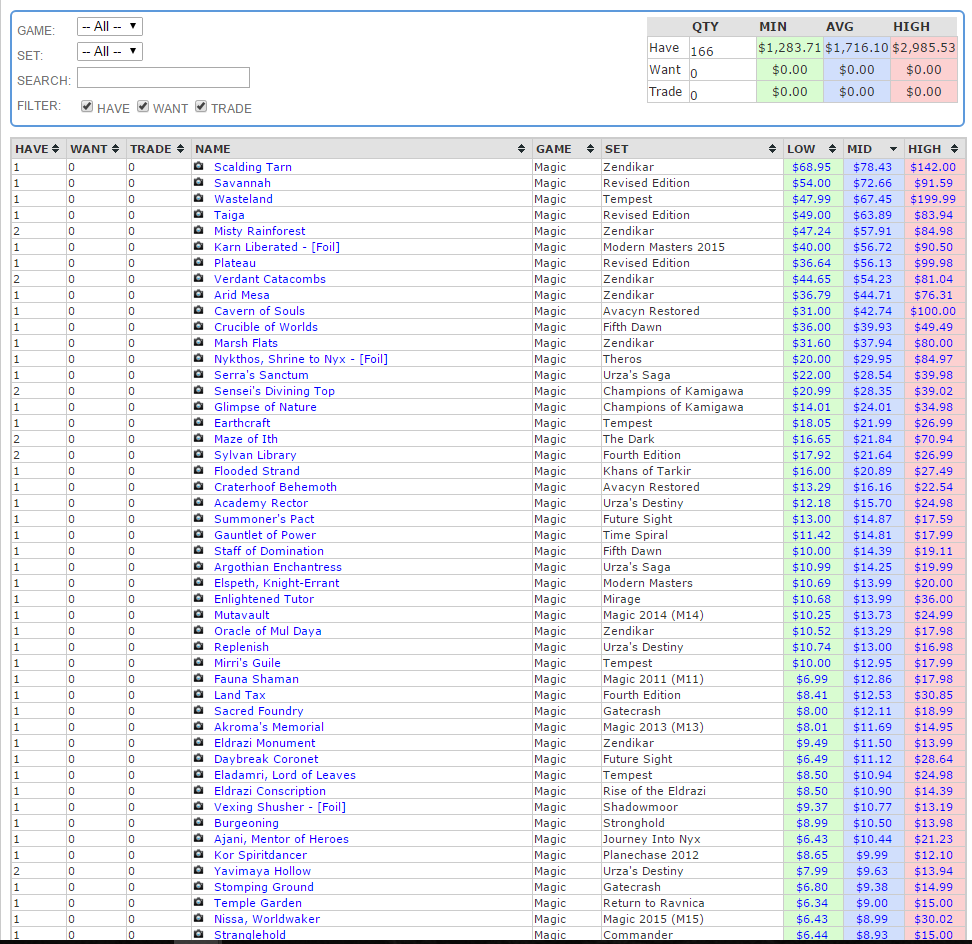 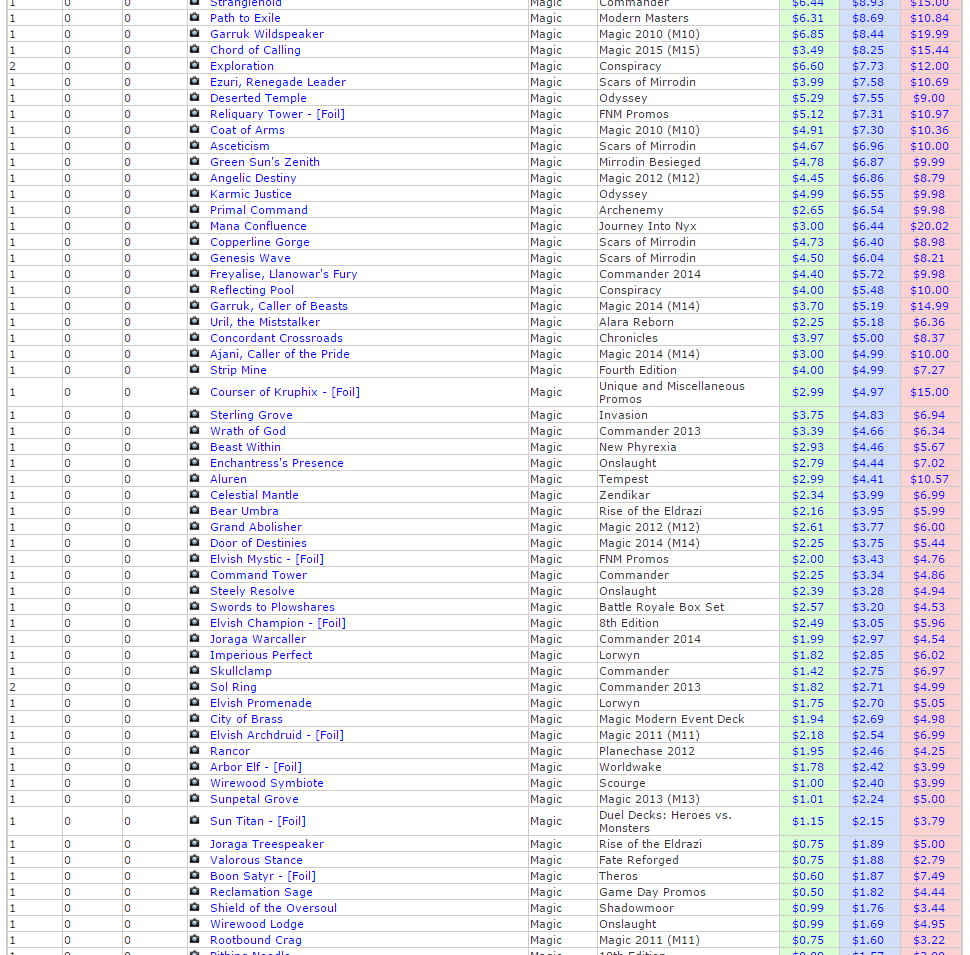 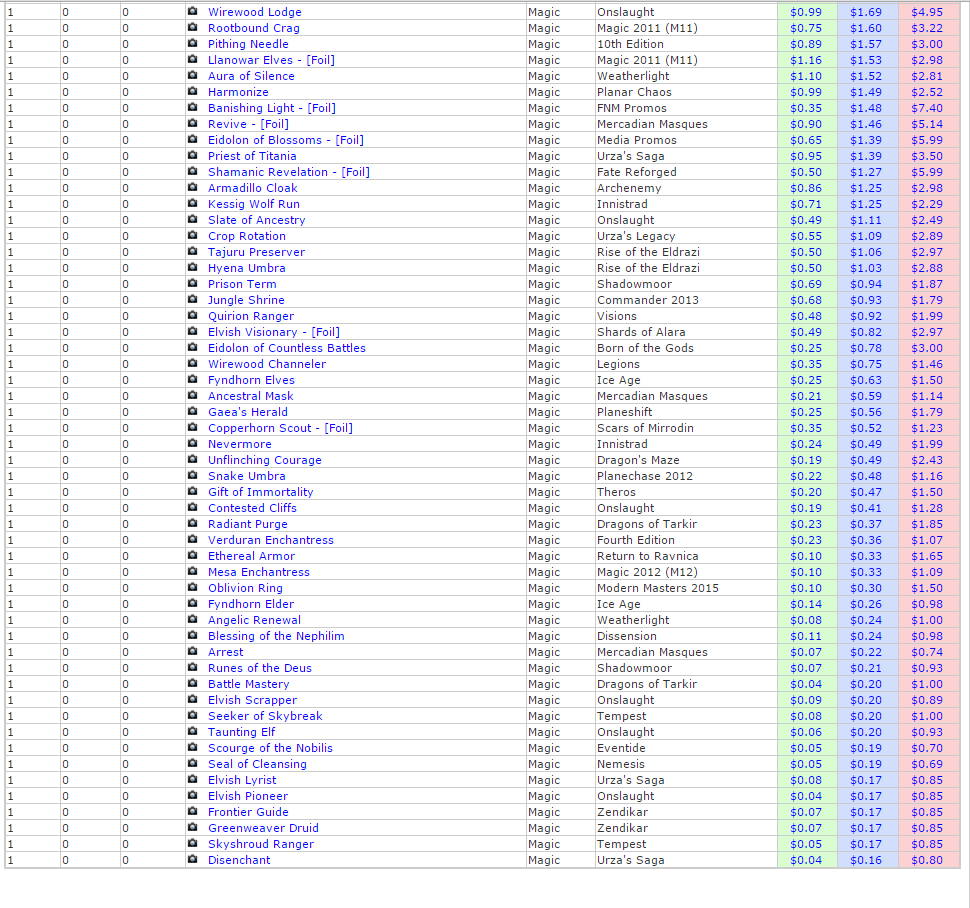 First and foremost, I always take everything to a private message discussion. I don’t want to start a bidding war in the comments section, and I don’t want to get a hundred notifications from other people commenting their offers. I comment with “PM sent” (or “PM me” if their privacy settings are too high) to ensure we can discuss everything between the two of us. 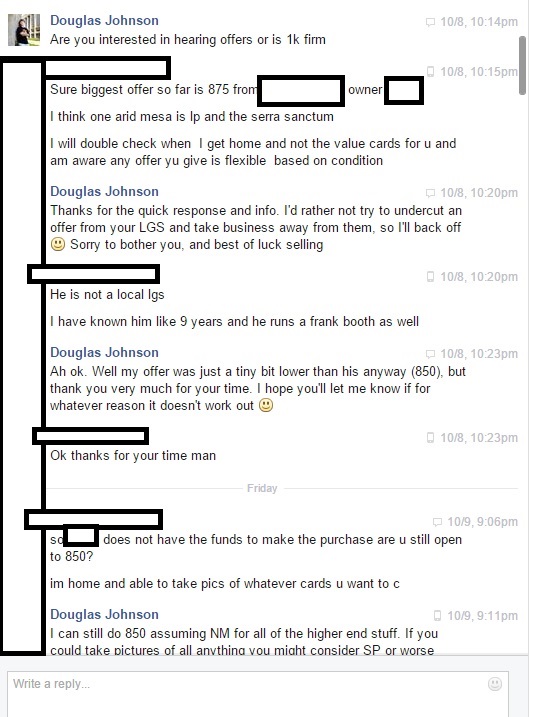 Thankfully this seller was very realistic about the options he had, and was very pleasant to deal with throughout the entire process. It’s not always this easy, and some sellers don’t take kindly to offers, either due to delusions of grandeur or refusing to accept the true cash price of their cards.  You don’t want to message someone who’s selling organized singles at 10-percent off of TCGplayer mid and try to offer buylist—you’ll just be wasting your time. You want to look for a post similar to this one; 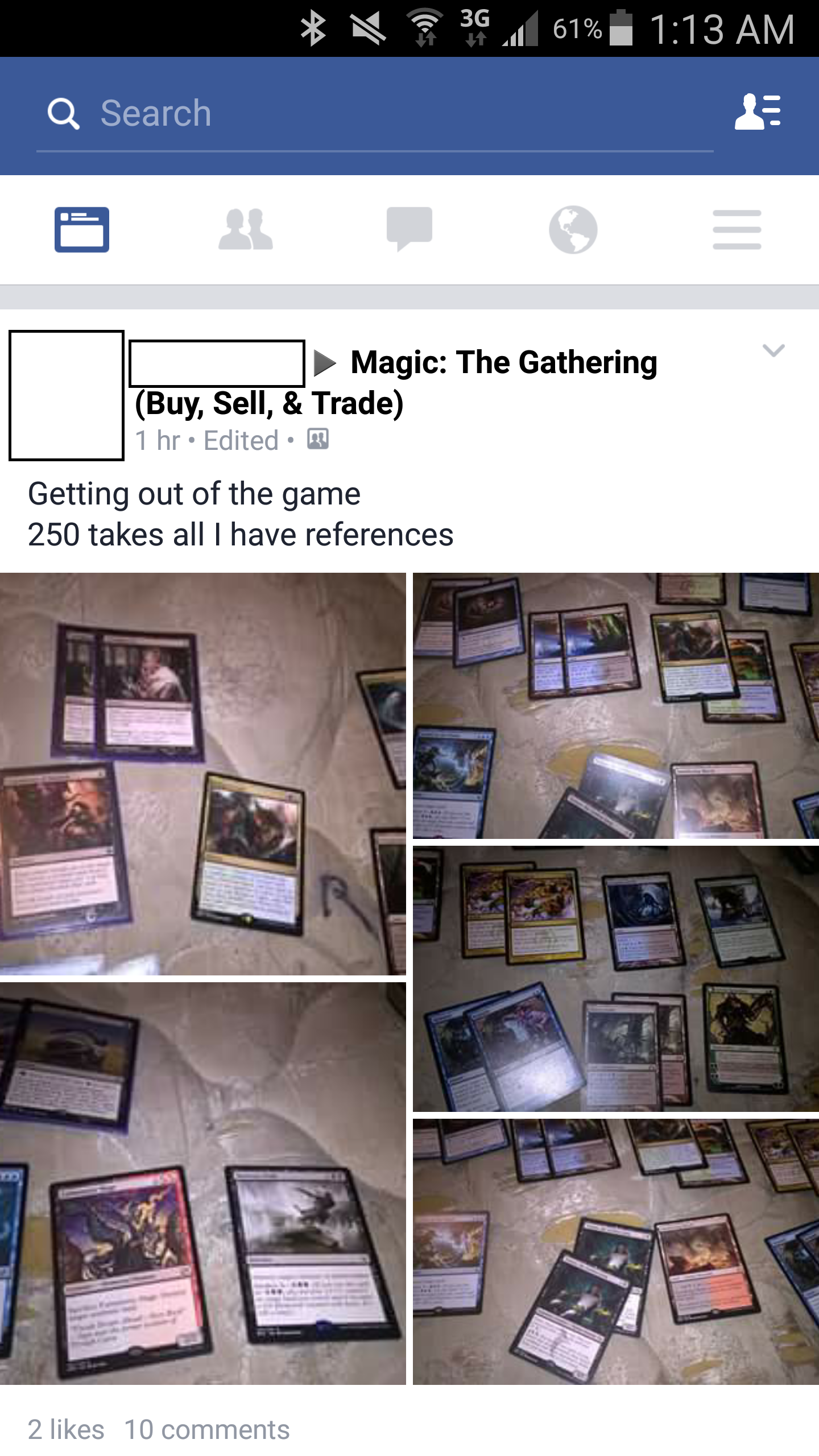 When you’re negotiating and presenting your initial offer, you need to present yourself as an option, and make it clear that you’re not necessarily their only or their best option.

Let’s make up an imaginary scenario to demonstrate how I go through these situations. Jason has $500 TCGplayer mid worth of singles that he wants to move on Facebook as a lot and makes a post asking for $350 OBO. He gets a few comments on the thread asking for prices on certain singles, but Jason would really just rather avoid the hassle altogether and ship one package. That’s where we come in. Once we get confirmation on the important card conditions, potential foils, and other information that wasn’t visible in the initial picture, we present our offer.

“Thanks for helping to clarify with that information, Jason. $350 is a really good price and I’m sure someone else will probably pick it up at that number, but it’s just a little too high for me personally. I was going to offer $270 for the entire lot, and I can PayPal today if that makes a difference. If you end up changing your mind, you’re always welcome to message me. Good luck with the rest of your sale :)”

Instead of shoving a number down his throat, we gave him an option. A price of $350 isn’t too bad—someone might actually decide to buy at that number, and that’s okay. We didn’t want to bid against that person, anyway. However, it’s more likely that the seller won’t get another offer over the next couple of days, even if he does bump his post. We gave him the power to make a choice between taking our immediate offer, and holding out to try and get more from someone else, with no pressure or strings attached.

Sometimes, I’ll take it a step further and outline all of a seller’s other options to them as well, especially if I get the sense that they’re trying to maximize their value in selling off their collection. Explain to them that if they want to squeeze the most value out of their cards, they should probably list the higher-end singles on TCGplayer or eBay, or price the cards out individually to sell on Facebook at ten percent below the cheapest matching condition copy. Let them know about other buylists like Card Kingdom, ABU Games, or Strike Zone, and explain the process of buylisting to them if they’re foreign to the concept.

The key is to be blatantly transparent, and present them with as many options as possible. Most of these options involve getting paid more than you would pay them, but that’s fine. Fortunately, this transparency has two advantages for you in addition to giving your seller information to make their decision. The option you gave them is probably the only one that would pay them within the next day or two, and cash in hand is king. If they list their cards on eBay, they won’t reap the full benefits for multiple weeks, or even months. Buylists can take a while to process, but you’re a buylist with a very quick payment process.

The other benefit of this transparency is that it smooths the air between buyer and seller, and tension goes down. You’re no longer seen in their eyes as the “guy who’s trying to lowball me and rip me off,” because you’re the one who just told them about all of the other ways they could make more money instead of selling to you. You’re just one of their options, and you have a serious advantage on all of the seller’s other choices as long as you follow the steps to protect yourself as mentioned earlier.

I hope this helps. Happy hunting!