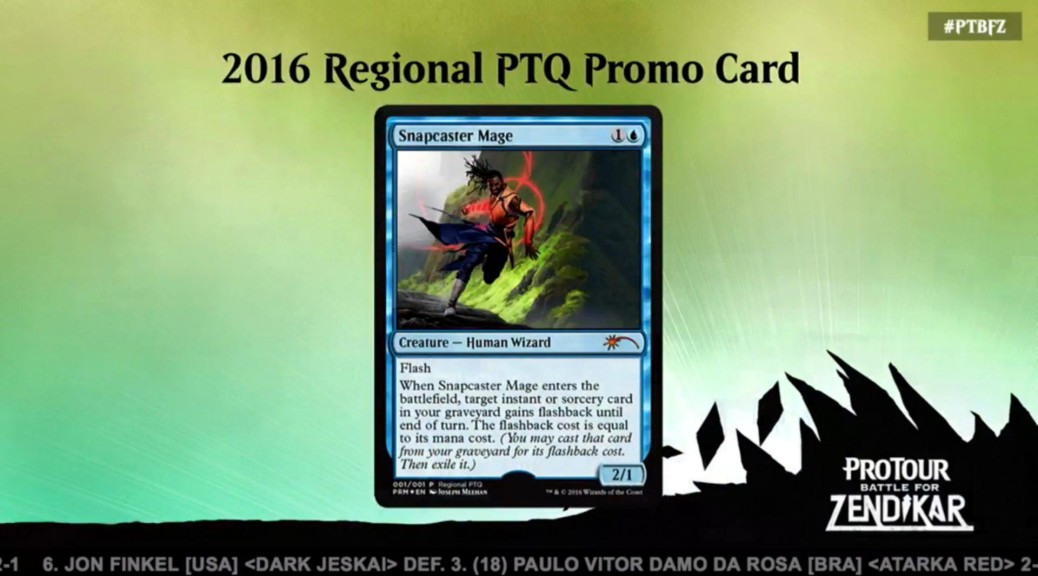 If you haven’t heard of it, the inimitable cross-format all-star blue two-drop, Snapcaster Mage, was unveiled as next year’s RPTQ promo in an announcement during the Pro Tour last Sunday. You can read about the details here. 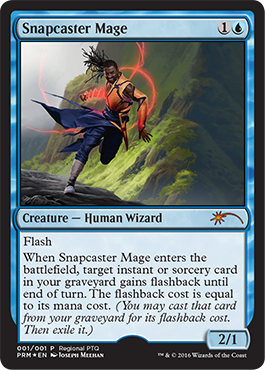 Snapcaster Mage was the biggest winner during this year’s Modern season over the summer. Despite being the third most-played card in Modern and the most-popular creature in the format, Tiago Chan’s invitational card languished at $25 to $35 for the majority of its existence. Spring this year finally saw Snapcaster move up to $60, and July, at the height of the Modern fever, Snapcaster breached $100. 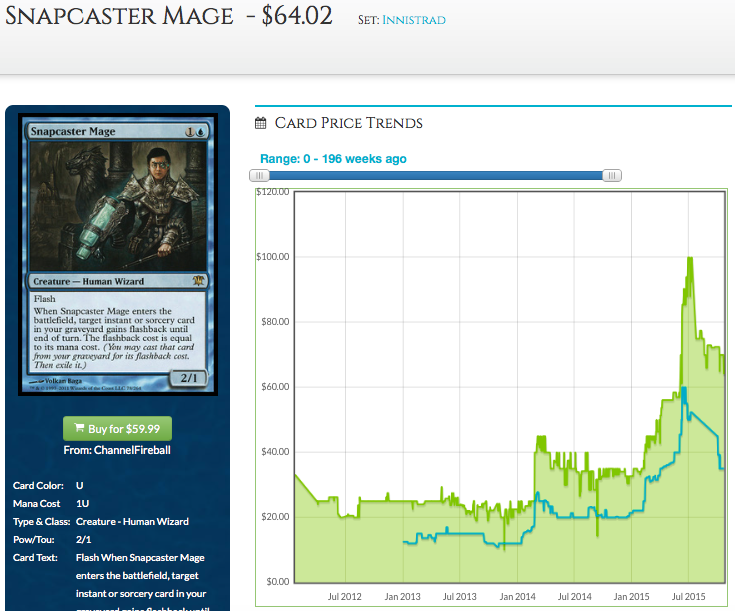 $100 is an extraordinary price tag for a rare from the modern-era print run, but considering Snapcaster’s ubiquity in the format, it is not preposterous.

According to statistics from mtgtop8.com Snapcaster Mage was found in nearly one-third of all Modern decks, and decks that run Snapcaster ran three to four copies of it. Nearly all tier one decks running blue require Snapcasters, in similar veins to green-based decks requiring Tarmogoyfs. The goyf may reign supreme as the most expensive card in the format, but lacking a playset of Snapcaster would cut you off from a larger number of tier one Modern decks compared with not owning Tarmogoyfs.

Snapcaster Mage is the definitive creature of the Modern format, and one of the biggest mtgfinance long-term holds over the past few years (give yourself a pat on the back if you’ve bought Snaps at $25- $35). While players rejoice at reprints, financiers holding copies of the affected card rue the same event for the fact that reprints quite often spell a death knell for the price of affected long-term holds.

Even though I have a tiny number of long-hold Snapcasters, I am actually happy with the announcement as I shall elaborate in this article.

The Next Most Likely Mass Reprint of Snapcaster Mage

Before I go on to discuss the reasons Snapcaster being next year’s RPTQ promo is good for long-term holders of the card and players alike, I would like to explain an assumption which I think most of us could agree on:

The next most likely mass reprint event for Snapcaster Mage would be in the summer of 2017, in Modern Masters 2017.

After Innistrad dodged reprint in Modern Masters 2015, the biggest medium-term risk to the price of Snapcaster Mage is being selected as next year’s Grand Prix promo. Even though Grand Prix promos are foil versions featuring a new art, the sheer number of Grand Prix promos given out asserts a depressing impact on the long-term price of a card. The Grand Prix promo reprint of Modern-and-Legacy mainstay Griselbrand pretty much smashed his price to smithereens. Batterskull remained high for a few months in 2014, when it was the Grand Prix promo for the year,  but it eventually dropped and is now having a hard time growing despite being a mainboard card in Legacy Stoneblade and Death and Taxes and a spattering of Modern play, mainly in the sideboard. Let’s do a little back of the napkin calculation. There are 54 Grand Prix in 2015. Assuming an average attendance of 1,000 players per Grand Prix (most North American and European Grand Prix tend to attract a much larger crowd), by the end of 2015 there would at least 54, 000 copies of a card being introduced into the market and that is a very conservative number as it does not take into account outliers like the Modern Masters 2015 weekend which saw nearly 10,000 players receive the Griselbrand promo.

Comparatively, there are only four RPTQs per year. The sole RPTQ attendance figures released by Wizards so far revealed an attendance of 1,923 for the Pro Tour Battle for Zendikar RPTQs (the article cites ‘around 1,800’, but tallying up the figures from the table in the article gives 1,923). Rounding the figure up to 2,000, we can assume that the number of promo Snapcaster Mage that would be handed out next year to be around 8,000 at most, and that is a mere 1/7 of the conservative estimate of Grand Prix promos given out.

The main takeaway is that Snapcaster dodged the most damaging event to his price in the short-term when he dodged the Grand Prix promo bullet. We could be very certain about that once we know that he is next year’s RPTQ promo. 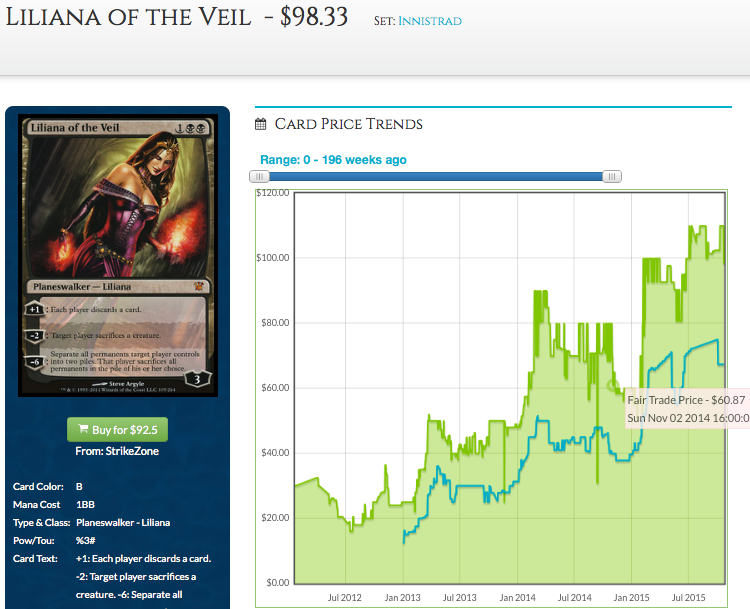 The announcement that Liliana will be the promo card for this year’s RPTQs came on October 11 last year, during Pro Tour Khans of Tarkir coverage. Lilliana’s price tanked by about 25% from $80 to $60 at the beginning of November, presumably in anticipation of the upcoming influx in supply. However, at mid-February this year, Liliana experienced a spike which saw her price shoot up to a record high of $90, and a year after the announcement of the Liliana RPTQ promo, Liliana is perched at $110, the highest she has ever been since her release in 2011.

Lilliana’s price trend was not surprising given that Liliana is a three-to-four-of staple in two popular Modern archetypes, Jund and Junk. Plus, every Modern PPTQ season sees our favorite necromancer growing one year older. Unless Jund and Junk were to fall out of favor (unlikely, given their track record of being a safe choice in whatever environment of the Modern metagame), Liliana’s price is not to go down until a mass reprint, which is also most likely in the next instalment of Modern Masters.

While Liliana of the Veil is one  rarity tier higher than Snapcaster Mage, the amount of play Snapcaster sees in Modern is double than that of Liliana.

For comparison, while both Liliana and Snapcaster were present in an average of 3.3 copies in decks that run them, Liliana was only found in 12.7% of deck but Snapcaster was in a 27.7%. For every deck that ran Liliana of the Veil, there were slightly more than two decks running Snapcaster Mage.  The same applies for Legacy, where Snapcaster Mage is found in slightly twice the number of decks compared with Liliana.

Correction: Eric Duerr on Twitter shared a photograph of an uncut foil Innistrad sheet showing that the ratio of Snapcaster:Liliana is actually 2:1. Thanks Eric!

It is hard to quantify demand by archetypes in the each format. For all we know, Snapcaster decks could be more popular than Liliana decks in either format or vice versa. There are also a portion of eternal format players who seek to buy into the format rather than single decks.

I would argue that the demand-to-supply ratio of Snapcaster Mage is similar to that of Liliana. Which means the impact of the RPTQ reprint on Snapcaster’s price is going to be trifle and temporary, as with Liliana’s RPTQ reprint. Adding around 8,000 copies of the most ubiquitous creature in Modern is scarcely going to have a deep impact on the medium-term price of the card. 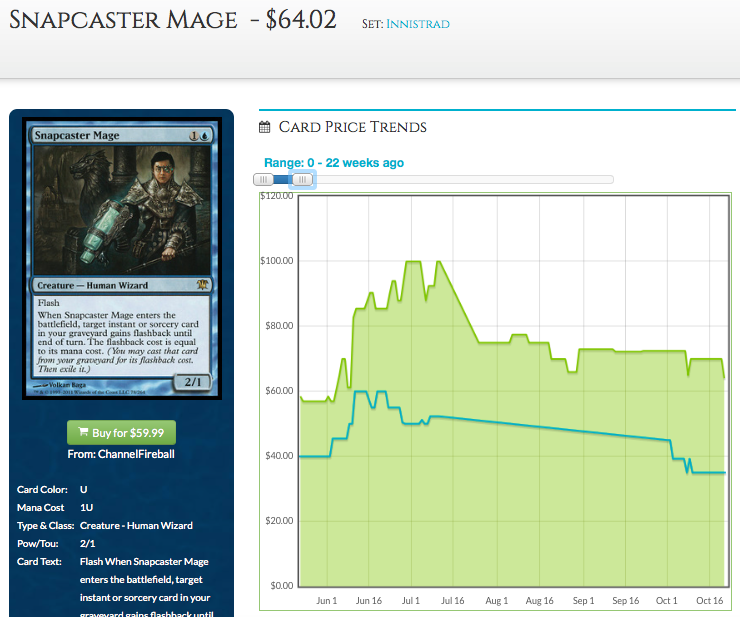 Unless the market reacts cautiously this time around, Snapcaster’s price is likely going to remain on a downtrend for the next few months mimicking Liliana’s trend after the announcement of her RPTQ promo. Regardless of the actual supply introduced by the reprint,  there is a stigma attached to reprint victims.  Either by early next year, spurred by a brief increase in Modern interest triggered by the Modern Pro Tour in February, or when the Modern PPTQ season swings around the corner come summer, Snapcaster’s price is going to trend up again.

Opportunities are abound for all parties when a quintessential Modern staple like Snapcaster Mage dips in price.

If you are planning to compete in next year’s Modern PPTQ season, or if you are looking to complete your playset of Snapcaster, go get Snapcaster in a few weeks’ time. $64 is already a good price for Snapcaster, but it couldn’t hurt to wait and see if his price tanks any further.  The next few weeks, or month or two, are likely to be the last Snapcaster price bottom until the summer of 2017, the most probable release period for the next instalment of Modern Masters. If you do not mind not having access to Snapcaster decks for the next year-and-a-half, you could always wait for Modern Masters 2017, but I am not sure that wait would be worth it. The first reprinting of previous Modern chase cards like Vendilion Clique and Cryptic Command in the summer of 2013 only depressed their price by $10 to $15 and by early 2014 their price hit a new high, regardless of the rarity in which they were reprinted in. 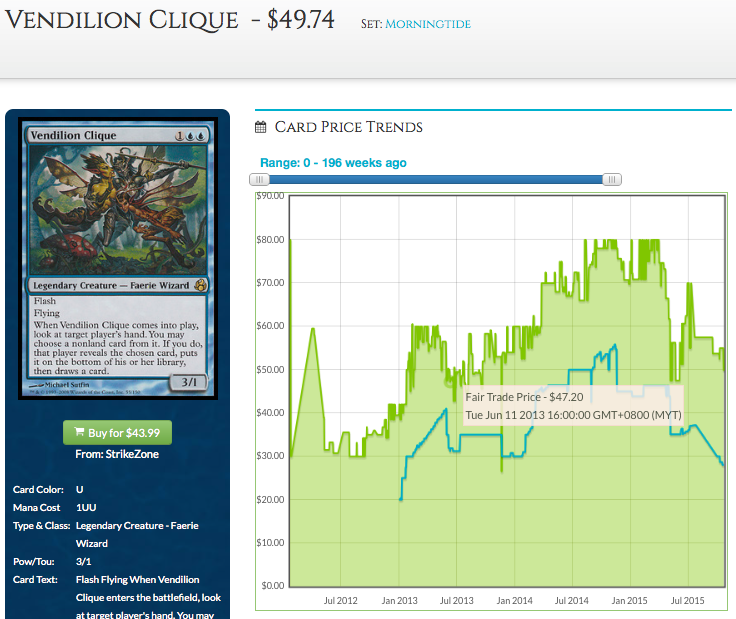 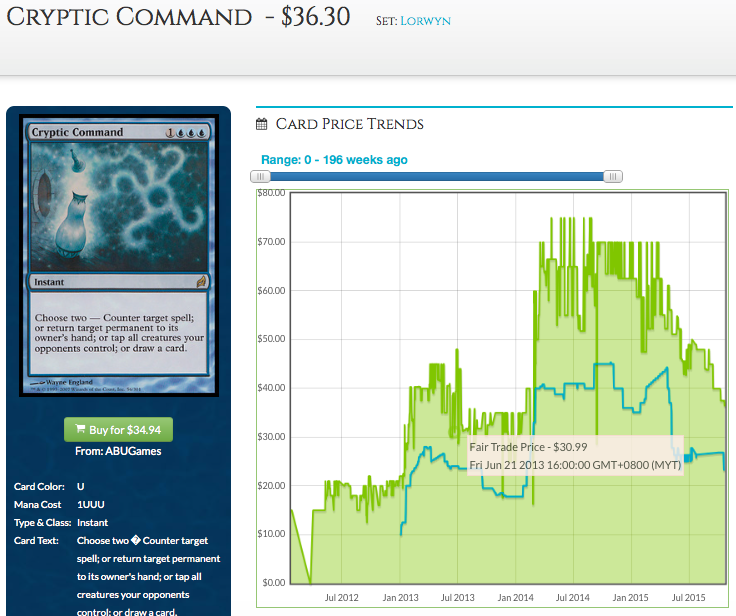 First off, there’s the relief of knowing with a high degree of certainty that Snapcaster Mage is a safe hold until the next Modern season in summer 2016. We would likely see Snapcaster Mage hit extraordinary price again during that time. I don’t think it is far-fetched to expect Snapcaster to hit $100 one more time, especially during this weekend in May 2016:

With two of the largest retailers and tournament organisers running concurrent Modern Grand Prix in a single weekend, can you imagine the price of a Snapcaster Mage during that week? Mid-May 2016 would be the best time to reap the return on your Snapcaster Mage investment.

Another reason why I like the Snapcaster reprinted as an RPTQ promo is the fact that it further depresses the price of Snapcaster from the $69 he was at before, making Snapcaster an even more lucrative mid-term spec target. We can be certain that Snapcaster’s current price is lower than it should be, as with the majority of Modern staples in the fall when the limelight is shining on cards from the new block and the post-rotation Standard metagame.

If you have the funds, going in on Snapcaster at his current price of $64 is not too shabby, but I would definitely recommend waiting for a few weeks to see if his price tanks any further. But don’t wait for too long, the window might close soon if the market catches on the trend with Liliana’s price after her RPTQ promo reprint.

Besides the relative security of not seeing a short-term reprint, one of the appeal of this spec is the presence of a set date where you could liquidate your spec and reap your profit, an aspect most mid-term specs lack. I wouldn’t go in too deep though. While Snapcaster hit $100 briefly, the highest his buylist price went to was $60. 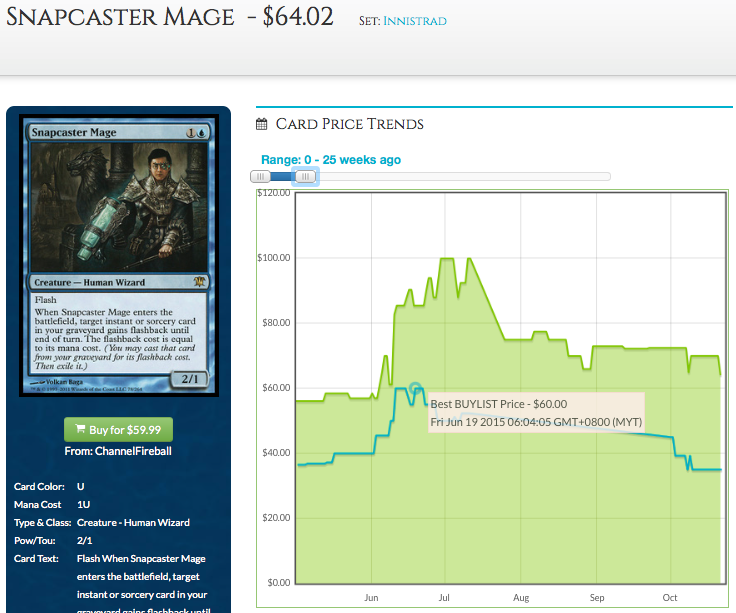 His brief stint at the triple-digit club was spurred by the one-month period this summer where there were three consecutive Modern Grand Prix, and the retailers knew that Snapcaster would unlikely sustain his price tag.

If you are buying into Snapcaster within this month or two to sell next May, your best bet on reaping optimal profit is liquidating your spec to players rather than buylisting them, which is why I wouldn’t recommend going in too deep.

Contrary to the usual impression of reprint events, the Snapcaster RPTQ promo reprint is likely to be a net positive for both players (duh) and financiers as it creates an opportunity for players and financiers to pick up Snapcasters at what is probably his final price bottom in the next year-and-a-half. Players lacking Snapcasters could assemble their playset in time for the next Modern season or next year’s Modern Grand Prix at a slightly cheaper price than without a RPTQ promo reprint. Financiers could rest well knowing that we are highly unlikely to see a mass Snapcaster Mage reprint until the next Modern Masters, which is likely to be in 2017, making it a safe bet to wait for the Modern PPTQ season next year to liquidate Snapcasters. Financiers interested in getting in on Snapcaster or bolstering their Snapcaster holdings for next summer could do so without the fear of being blinded sided by a surprise mass reprint.

This article turned out to be longer than expected, so thank you for sticking through to the end. Do share your thoughts in the comments section below, or catch me on Twitter at @theguoheng.

14 thoughts on “Snapcaster RPTQ Promo: A Win for All”