This kind of question can mean very different things depending on who you ask. Pure economists would say that the “expected value” of each option is identical. In the long run if you made the same choice over and over – no matter which choice it was – you’d net out with approximately $5 per iteration.

Naturally, things become convoluted when you introduce emotions and behavioral economists. They’ve done studies that reveal human tendencies to avoid risk and take the sure thing. On the other hand, there are also studies that indicate with small bets like five or ten dollars, people are more open to the risk than with gigantic bets like one hundred thousand dollars. I may be willing to risk $5 to win $10 more readily than I’d be willing to risk $50,000 to win $100,000.

But let’s put behavioral economics aside for a change, and focus on true expected value using pure economics. I believe I can apply this fundamental theory to an interesting situation in MTG Finance. Allow me to explain.

When trading stocks on Wall Street, the concept of expected outcomes is often used to evaluate a stock’s potential price. For example, analysts may evaluate the percent likelihood a small pharmaceutical company will have a successful phase three trial for their breakthrough drug, and then use that determination to estimate a stock price target. Through tireless research they determine a successful trial is 70% likely and would result in a $50 stock valuation while a 30% chance of failure would mean a $5 stock valuation. Doing the numbers, they’d therefore buy the stock if it’s below the expected value, 50*75% + 5*30% = $39, and sell if it exceeds this price.

Granted this is probably an oversimplification, but it illustrates the point. Recently I keep hearing that interest rates are pricing in a 70% chance of a federal reserve rate hike in December. To me, this means bonds are trading using a similar expected value calculation based on likelihoods.

As an investor, I believe the chance of a rate hike in December is even higher, and I’m buying certain stocks accordingly. Financial companies tend to do better when rates are rising, for example. (Disclaimer: This is not investment advice, you should do your own research before making an investment decisions.)

From RL Finance to MTG Finance

I believe this concept of expected value can be reapplied to a very special group of cards in the MTG Finance world. I’m talking about Zendikar Fetch Lands.

When Battle for Zendikar was announced, the enemy colored Fetch Lands faced tremendous headwinds from a price appreciation standpoint. While many other Modern cards were rallying, it seemed the original Zendikar fetches were stagnant…and for good reason. After seeing Shock Lands get hammered by a reprint in Return to Ravnica, many players applied a high percent likelihood the same would happen to Zendikar. Then once the set was spoiled and there were no Zendikar fetches, prices spiked.

I’ll use Scalding Tarn as a case study as it’s the most expensive fetch today. 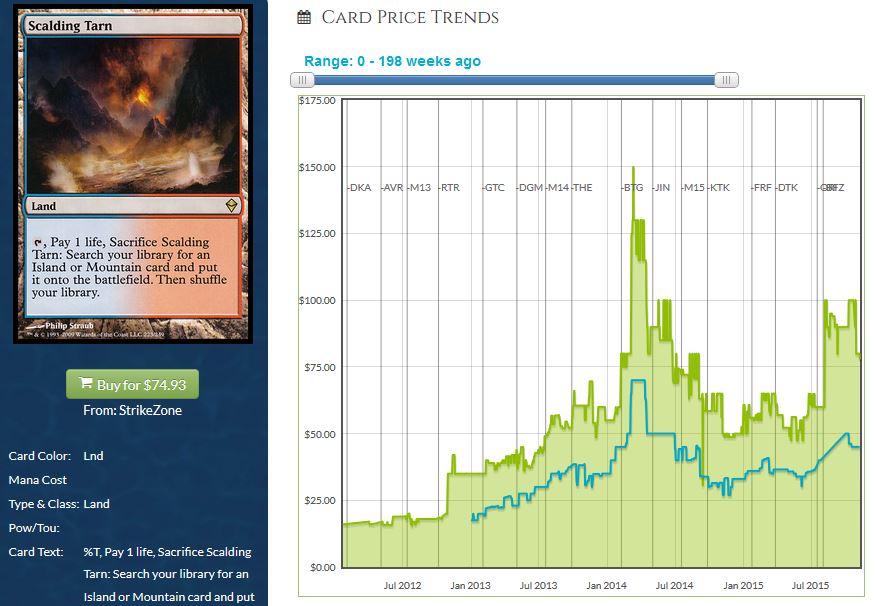 For ease of calculations, let’s assume that at its peak, Scalding Tarn was priced to have 0% likelihood of any pending reprint. We can then assume that the “right” price at maximum Modern hype for Scalding Tarn assuming no reprint is roughly $125. Of course, the card moved off that crazy high when Modern hype relaxed some. When hype subsided, players began pricing in a reprint in some set. If we assumed Scalding Tarn would drop to $20 if it was reprinted, we can back calculate and determine that the market was pricing in a 60% chance of a reprint in the near future at this time.

Then in March 2015, Wizards announced Battle for Zendikar. At that time, the value dropped from $60 to $50. This drop in price was likely related to adjustments to reprint expectations. Perhaps the chance of a fetch reprint went from 60% to 70% at that time, explaining the $10 price drop.

Then when Battle for Zendikar was fully spoiled and it became clear Zendikar fetches were safe, prices shot up dramatically again. Scalding Tarn peaked at around $100, indicating the chance for a reprint in some upcoming set (such as the new Commander decks) dropped all the way back down to 20%. Of course that hype didn’t last, and before long Scalding Tarn dropped back down to where it is today, at about $80. As of today my calculations dictate that the market is pricing in a 43% chance of a Scalding Tarn reprint in the near future.

Here’s the thing: I believe the likelihood of a Zendikar fetch land reprint is much less than 43%. We just received the full set list of the Commander 2015 products and to few people’s surprise, there were no fetches included. I’ll admit I was momentarily frightened because of the enemy-colored nature of the decks. But after listening to rationale on Brainstorm Brewery, my fears were allayed significantly.

Without reprint in Commander decks, I question when the next possible opportunity is to see Zendikar fetches. They won’t be in Oath of the Gatewatch. I don’t think they really fit in with Shadows over Innistrad – after all, the return to Innistrad will be excitement enough to sell this set. Wizards won’t need to reprint fetches to help sell it because the horror theme is so beloved by players already.

If I had to place my bets, I’d say we won’t see a reprint of Zendikar Fetch Lands until the block after Shadows over Innistrad or in Modern Masters 2017. That’s a long ways away. I believe the percent likelihood of a Zendikar Fetch Land reprint should be more in the 10-20% range. Using my basic spreadsheet, that yields a price range of $104-$115 for Scalding Tarn – a hefty premium to where it is today!

Based on all of this data, I pose this bold prediction for open consideration: by the time Modern season rolls around in early 2016, Scalding Tarn will return to its former “hyped” highs, roughly around $115. With a roughly $75 price tag today, that’s a 50% increase in value – quite the reasonable return on investment potential!

Naturally, the same exercise could be repeated on the other four enemy colored Fetch Lands. They would each have some expected value based on reprint likelihood, leading to a new price projection based on reduced likelihood. Therefore, I leave you with this thought: if you need Zendikar fetches for the upcoming Modern season, I recommend purchasing them as soon as feasible. We had a nice little pullback from the recent spike, but I believe the reprieve will be short lived.

If you’re looking for a place to invest some extra funds, I actually like Verdant Catacombs as an alternative to Scalding Tarn. 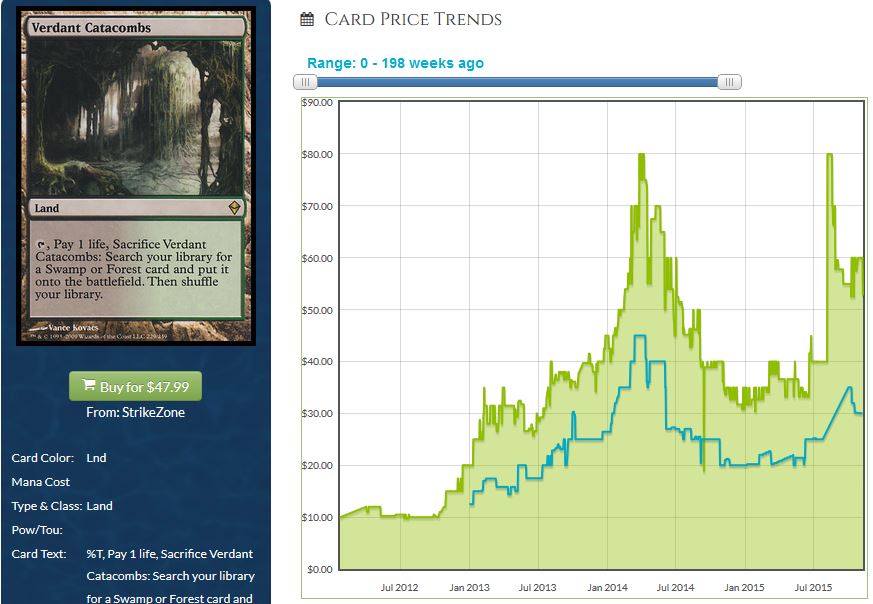 It’s not blue, but Green/Black combine very nicely in Abzan and Jund strategies. Catacombs is actually the second most played Zendikar fetch land, according to mtgstocks.com, and it’s the thirteenth most played card in all of Modern. 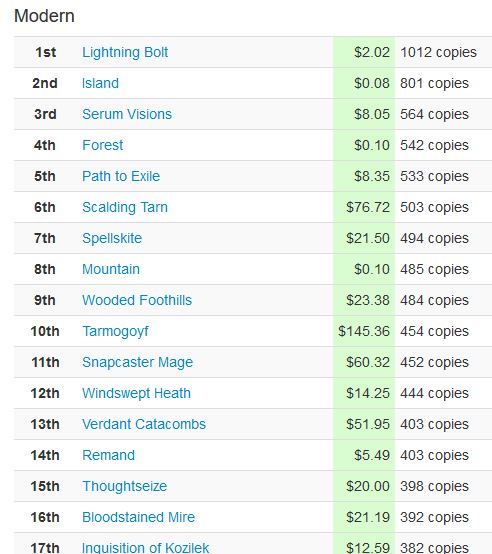 In terms of potential, Verdant Catacombs offers nice upside with a slightly more tolerable entry price compared with Scalding Tarn. Scalding Tarn will remain number one in the enemy fetches as long as Splinter Twin stays so powerful. But in terms of robustness, I like Catacombs for its potential growth.

Much like interest rates, I believe the market is miscalculating the likelihood of a Zendikar Fetch Land reprint. In both cases I am investing my funds accordingly. In the stock market I am overweighting my portfolio in financial stocks, and not long ago I picked up the Scalding Tarns I needed for Legacy along with a set of Verdant Catacombs as an investment.

The more I think about it, the more I believe I should be stepping up my investment in Zendikar fetches. While my risk aversive personality precludes me from buying in deeply (there’s always that lingering risk of a reprint), I should probably put emotions aside and make the economically logical bet. Since I am so risk averse, Behavioral Economics probably dictates I’m more likely to avoid the gamble by buying more fetches. But you know what? I believe that’s the wrong choice. I believe I should listen to pure economics on this one and step up my position.

So that’s what I’m going to do. I’d recommend you consider my rationale and likelihood calculations and determine for yourself if it’s also the right move for you. After all, this is merely a thought exercise leading to a potential conclusion: by combining our thought processes, hopefully our collective reasoning can help benefit all of us speculators in making the right investments. So please do share your thoughts in the comments section and let’s make some money!